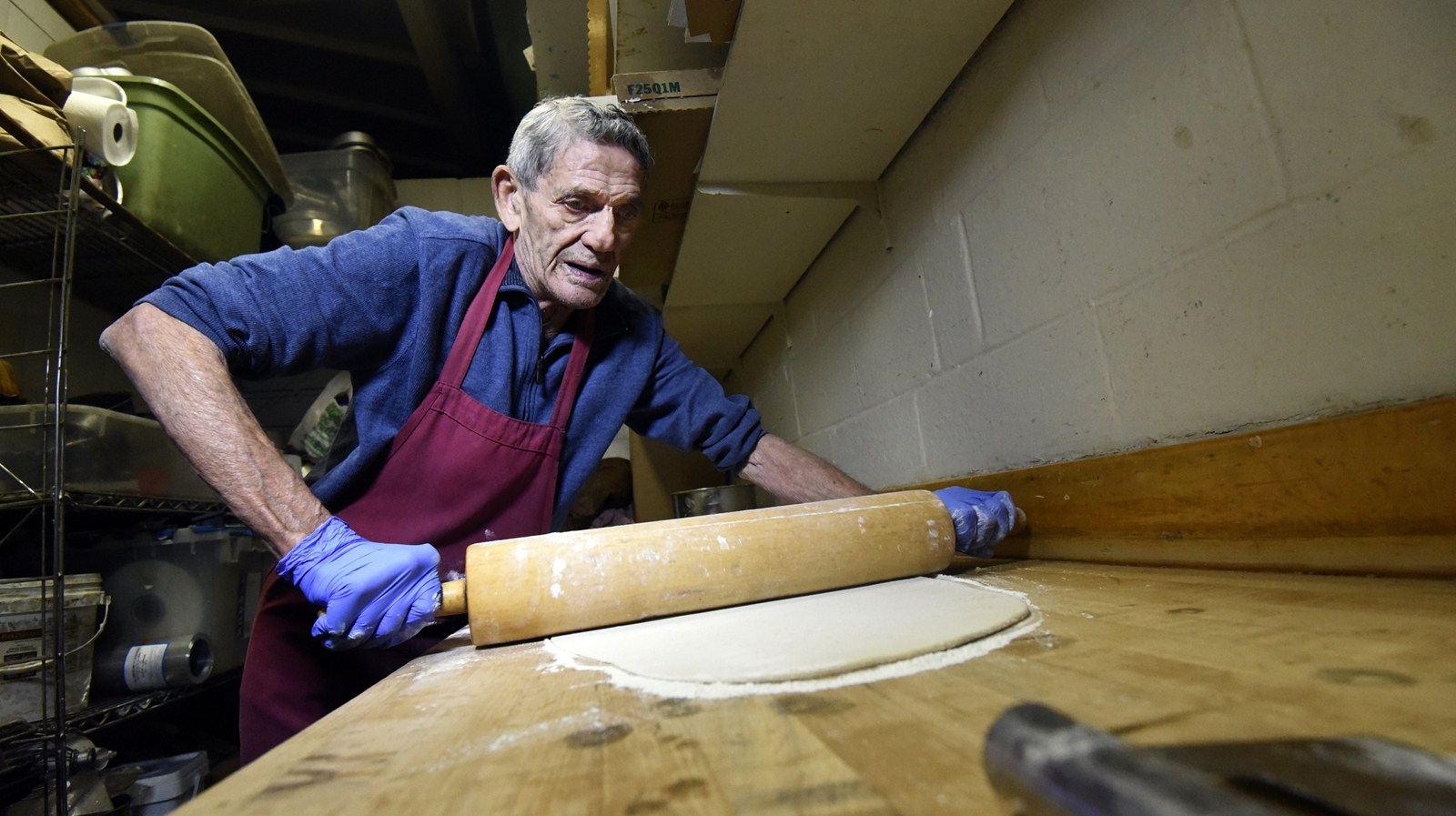 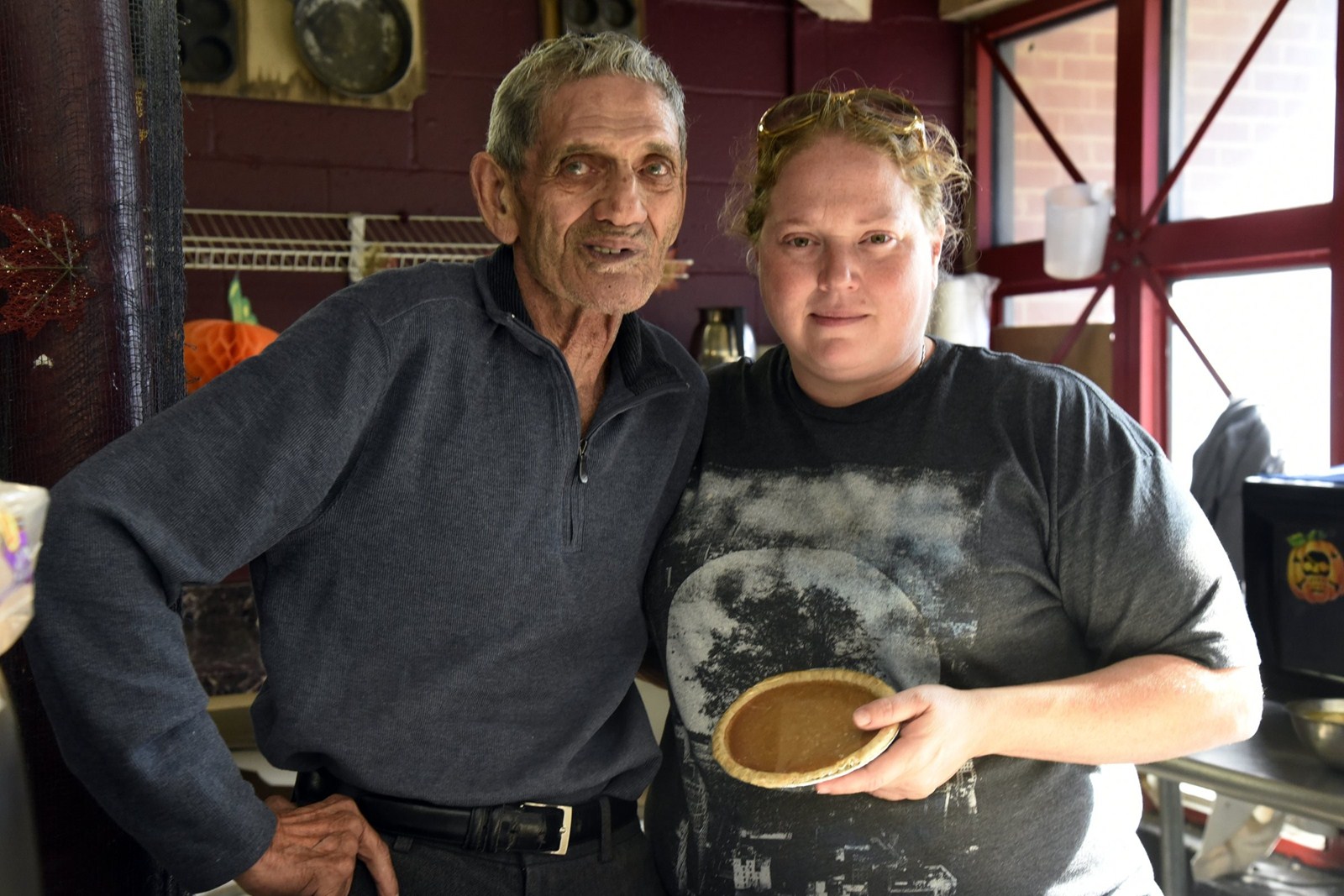 James Bowen, owner of Rose's Bakery, and his daughter, Rose Bowen. Rose holds an individual serving of sweet potato pie made at the bakery in the Northeast Market. ( Kim Hairston/Baltimore Sun )
PREVIOUS IMAGE

arah Arnold, 74, watches her older brother roll out the dough for chicken 'n pastry onto a flour-dusted countertop. She wonders aloud whether he needs her help.

She and James Bowen have been making this Lumbee American Indian dish since they were kids. Arnold was just 9 years old when she started cooking for her family while they worked the land in southeastern North Carolina, growing tobacco, cotton, corn and vegetables.

But at 81, Bowen looks like he's struggling. His small, hunched frame seems to show wear from every job he's had — from working the fields in the South to laboring in the box factory when he got to Baltimore, and later running Rose's Bakery in Northeast Market with his late wife for 40 years.

It was 1956 when James left Lumberton, N.C., joining a wave of thousands of Lumbee American Indians who migrated to Baltimore for work after World War II. By 1971, The Baltimore Sun estimated the Lumbee population in Baltimore at 4,000 and growing.

Though their numbers had dwindled to 1,127 in Maryland by 2010, according to U.S. Census data, more than 17,000 still live outside the tribe's home state of North Carolina. To stay connected, far-flung members turn to food traditions, often returning to the South for ingredients like coarsely ground cornmeal and collard greens.

“Actually, this is going to sound really crazy,” said James Bowen's daughter, Rosie. “But I drive all the way to North Carolina, to Lumberton, to get sweet potatoes.”

All of the sweet potatoes used to make the pies and sweet potato bread sold at Rose's Bakery are from North Carolina. Rosie Bowen said they're given weeks to “cure,” or sit out after they're plucked from the soil of Lumbee farms.

When she returns “home,” Rosie brings back other fresh produce like collards that aren't picked until after the first frost and yellow bags of House Autry self-rising cornmeal.

“It's a different kind of taste,” said Arnold, Rosie's aunt, noting that it's more coarsely ground than what's available in Baltimore.

The dishes they make are familiar. Chicken 'n pastry, a sort of chicken noodle soup, is a staple of Lumbee cuisine. But there are others, too: fattening treats like golden brown hush puppies, fried cornbread and sausage. There are also plenty of vegetables like field peas and chowchow, a type of relish.

“Lumbee cuisine is kind of seamless with Southern cuisine in the sense that we have borrowed from all of these cultures,” said Malinda Maynor Lowery, a history professor at the University of North Carolina at Chapel Hill who is of Lumbee descent.

With more than 70,000 members, the Lumbee are the largest American Indian tribe east of the Mississippi. They include several tribes that banded together with the advent of European settlement, according to Maynor.

They were granted partial federal recognition in 1956 and today live primarily in and around Lumberton, along North Carolina's Lumber River, in the southeast section of the state.

Many Lumbee who migrated to Maryland settled in Fells Point and found blue-collar jobs at places like General Motors. And recent years have seen another kind of migration, this time with Lumbee families moving from the city to Baltimore County.

“Growing up, maybe there were two or three Lumbee families out in Dundalk,” says Ashley Minner, 33, a local Lumbee artist. “And now the majority of people are actually there.”

Despite their dwindling numbers, a few pillars of the Lumbee community remain in the city. There's the Baltimore American Indian Center on South Broadway in Fells Point, containing a museum dedicated to American Indian culture. A block away is the South Broadway Baptist Church, purchased by Lumbee community members in the 1950s. Nicknamed “the Indian church,” it still draws roughly 100 congregants from around the area, according to the Rev. Bobby Hunt.

On a recent rainy Saturday, several dozen people were seated in the church's fellowship hall while men and women were busy in the kitchen, preparing a feast of Lumbee home cooking for a dinner honoring a pastor.

Larry Hunt, 63, has attended services here since his childhood. Back then, Hunt said, “On Sunday, honey, that place would be full.” Attendance is comparatively sparse now.

For tonight, Hunt has prepared a favorite dish he's been cooking for more than 50 years: chicken 'n pastry.

The dish remains a staple for the Bowen family, too.

At the bakery in Northeast Market, there's nothing that would alert an outsider that it's Lumbee-owned. A photo of James Bowen and his late wife, Rose, hangs by the cash register. A manager is embellishing a cake for a little girl's birthday party. Red-haired Rosie Bowen is unloading a sheet of sweet potato pies from the oven.

But to the trained eye, there are hints. The antique dishes hanging over the cash register belonged to Rose, a Lumbee who died at the age of 104. Rosie sometimes keeps a stash of chowchow and North Carolina cornmeal on hand in case another American Indian passes by. And today, in the back, two Lumbee, James Bowen and Sarah Arnold, are rolling the dough for chicken 'n pastry.

James Bowen retired at 80, when he decided he was too old to be working at the bakery. But he returns to the shop at least once or twicea week to keep an eye on things.

“I think he'll come here till the day he dies, and want to be here until he can't walk or something like that,” Rosie said.

After a few moments, the loaf of dough has been molded into a perfectly even sheet, ready to be cut into strips and dropped into a boiling pot of chicken soup. Within half an hour, everyone who works at the bakery is slurping from plastic foam bowls.

One of James's old friends, Eyrtle Smith, stops by to say hello — they haven't seen each other in years. He dons a Navy vet's cap. Like James and other Lumbee who left North Carolina in the 1950s, he came for work but joined the service instead. Rosie offers him a bowl of soup.

“This is what it's like,” Rosie said, tending to business with a bowl of soup at her side.

People just come by — for chicken and pastry, for a chat with James, for some coarsely ground cornmeal or for pie made with sweet potatoes plucked from the soil by Lumbee hands, as they've been for generations.

PREVIOUS ARTICLE
Article 36 of 92
NEXT ARTICLE