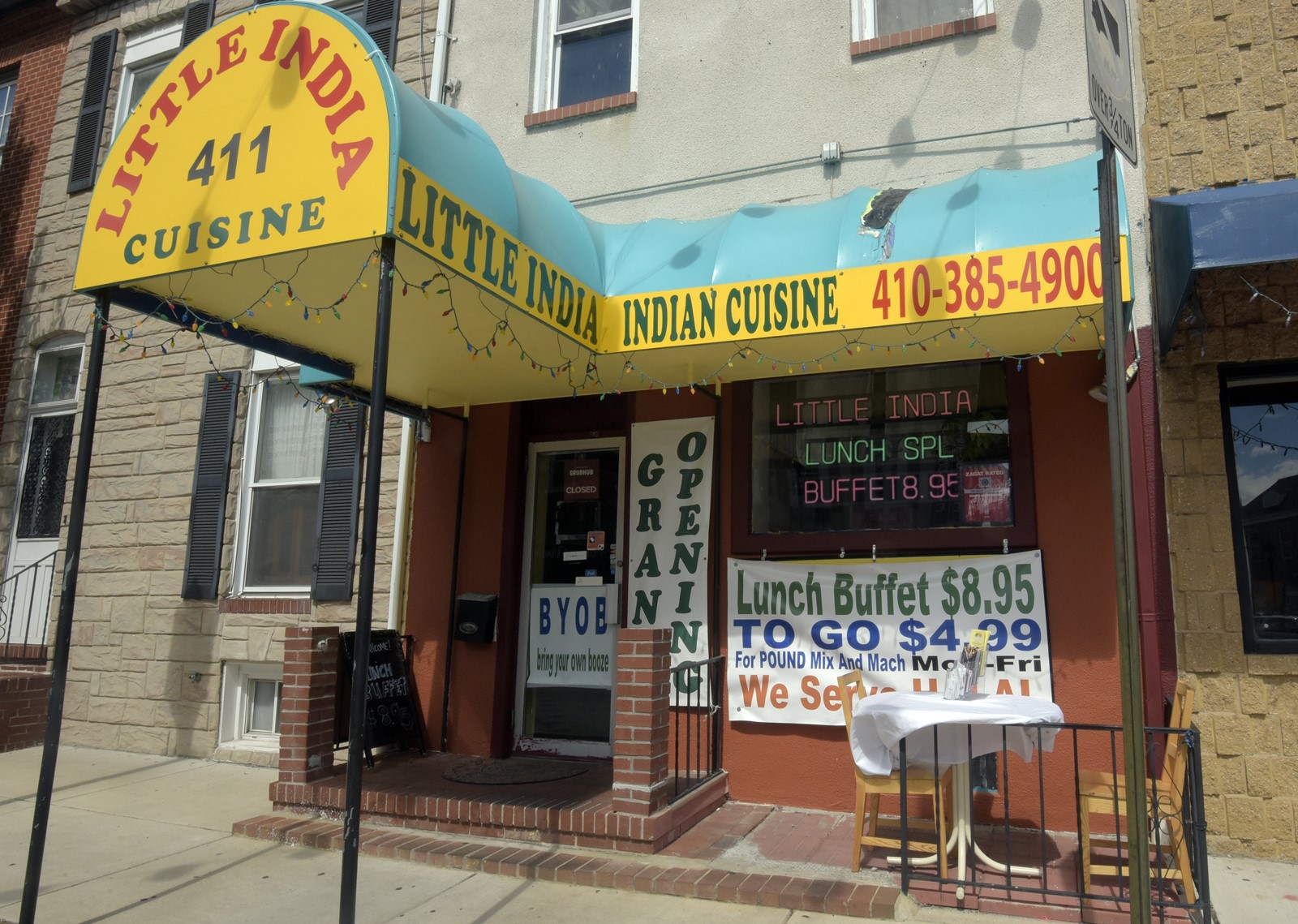 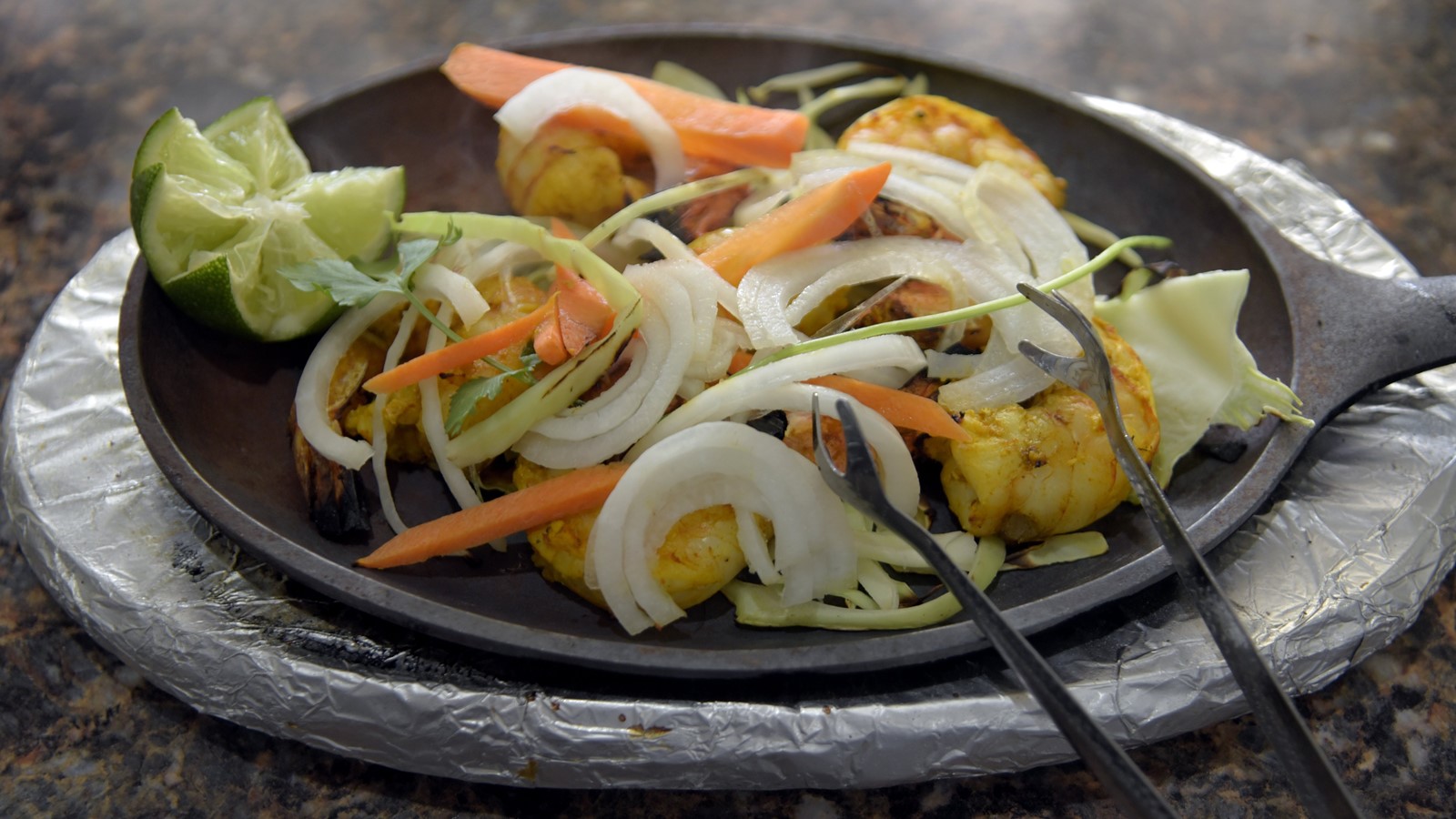 Haldi jhinga is a tandoori dish with marinated shrimp and vegetables, including carrots, green peppers and tomatoes. (?)
PREVIOUS IMAGE

Restaurateur Chander Shekhar became a fan of Little Italy during a visit to Baltimore and soon knew where he wanted his next restaurant to be.

“I saw so many people, customers going to restaurants,” he said. “I thought that this is a good place for me.”

The modest restaurant is a good place for customers, too. As soon as you walk through the door, you’re embraced by the enticing aromas wafting from the kitchen. I couldn’t help but blurt out, “Dinner smells good!”

The small space is neat and tidy but underwhelming. Bare Formica-style tabletops are set with blue paper place mats and white paper napkins. A buffet table is set up along one wall for lunch service.

There are a few decor nods to the Indian cuisine being served, including artwork with village scenes, brass vessels and a tribute to the Hindu deity Ganesha above a doorway.

But the focus is on the food, which shines in this unassuming eatery. It’s BYOB, so grab your favorite alcoholic beverage and plan to stay a while.

There is nothing fancy about the rowhouse restaurant with bare tables and a carpeted floor. There were only a couple of diners during our visit, although the place was doing a booming carryout and delivery business. Contemporary Indian music is a nice touch throughout the meal.

The avocado banana mousam ($7) wowed us right from the start. This masterful dish was a delightful mix of fresh banana chunks, banana chips, avocados, onions, tamarind, dates and raisins. The ragda tikki ($6) was another success. Pan-fried potato patties were topped with spiced chickpeas, onions, yogurt, tamarind and mint chutney. We had to wait a while for our naan order because it was being cooked. The tender flatbread was wonderful when it arrived, especially when dipped into the mixed raita ($3), a yogurt mixture with cucumber, onions, tomatoes and carrots.

The main dishes were as great as the starters. The haldi jhinga ($18), a tandoori dish, was served in a sizzling cast-iron skillet with five large shrimp — which had been marinated in garlic, mustard and a smidge of saffron — and vegetables, including carrots, green peppers and tomatoes. But the shoulder-drop dish was the badla mousam ($20), a gorgeous, meaty lamb shank in an aromatic yogurt broth with ginger, garlic and a pinch of heavenly cardamom, served with rice.

If you bring a bottle of wine, a server will bring goblets and a corkscrew. Menu beverages include three types of lassi, masala tea, juices and soda.

Our waitress was charming and personable.

The restaurant didn’t have gulab jamun, a traditional Indian dessert, the night we were there. We hardly suffered. The shahi kheer ($6) may be one of the best Indian rice puddings in town, silkily seductive with milk, saffron and nuts. The carrot halwa ($4) was also terrific. The delectable, warm dish of grated carrots was prepared with milk, sugar and nuts.

PREVIOUS ARTICLE
Article 59 of 95
NEXT ARTICLE