The price of one viral moment

Jukin Media pays for video in hope that it sweeps Web 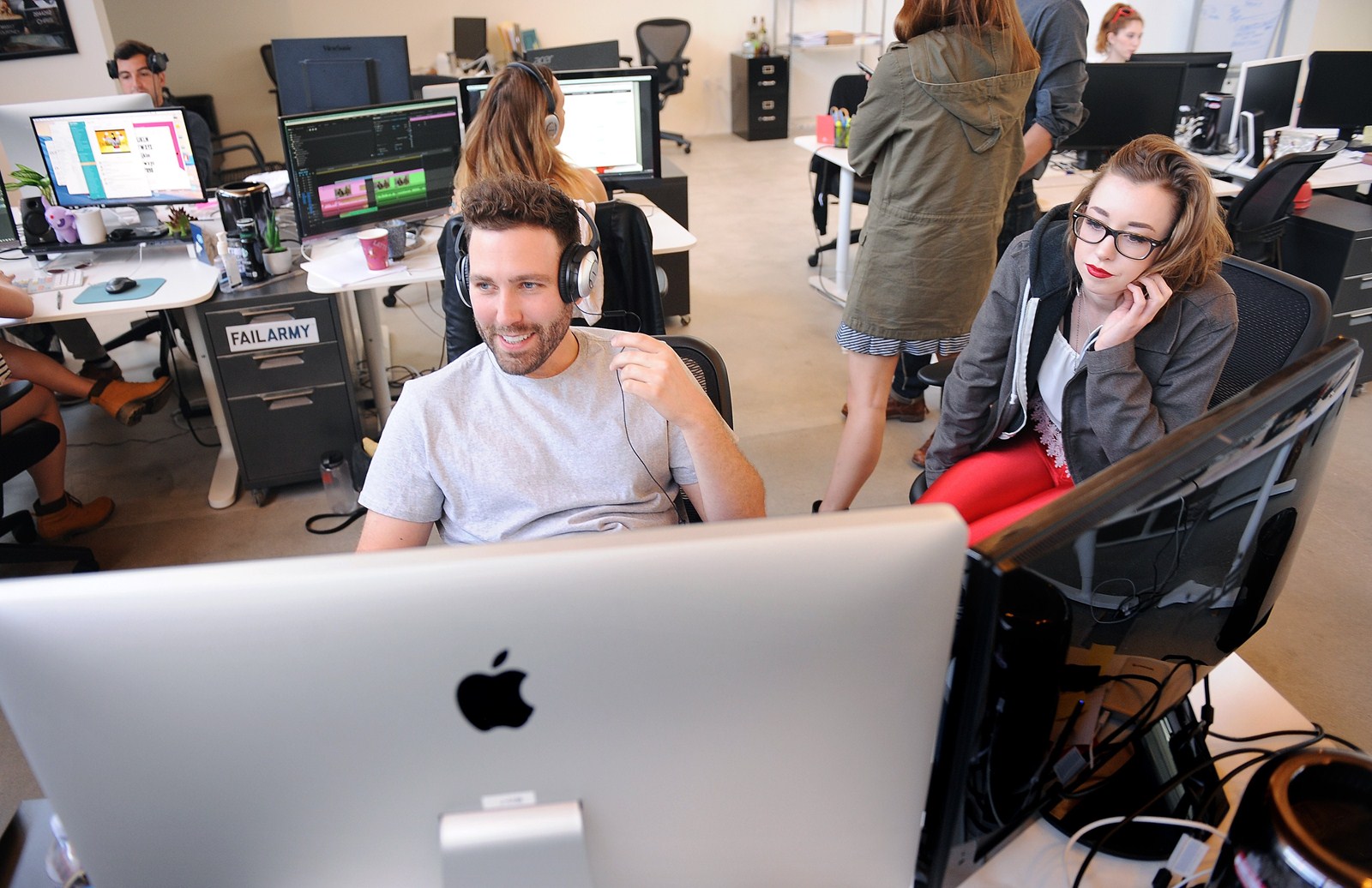 For a six-figure payout, it has to be viral fodder — like the Canadian globe-trotter who, while trying to take a selfie, got kicked in the face by a passing train conductor in Peru.

Each pratfall has its price because companies like Jukin Media have built an improbable business model cutting deals for these snippets of human folly. A “fail” can rack up tens of millions of ad-generating views on YouTube. It can be sold to TV shows, news websites, brands and ad agencies.

But first Jukin must find it — and buy it.

“These videos are the pop culture, zeitgeist, water cooler moments of the week,” said Jonathan Skogmo, Jukin's 33-year-old founder and CEO. “There's a gold rush for this content.”

Jukin's nerve center and headquarters is in Culver City, Calif., where many of its 130 employees hunker over computers searching for the next “Pizza rat” or “Girl getting attacked by a manatee.”

When a hot video clip is acquired, Skogmo and his charges bang hotel counter-type bells like an alarm.

“It makes things fun and competitive,” said Skogmo, who studied film at Columbia College in Chicago.

Skogmo moved to Hollywood hoping to fulfill his dream to become a filmmaker.

He landed his first TV gig in 2006 as a researcher for a derivative of “America's Funniest Home Videos” on CMT called “Country Fried Home Videos.” Skogmo's job: reviewing submissions on VHS cassettes he picked up from a post office box.

“For country fails we weren't necessarily using tractor clips,” Skogmo said. “It could be a guy on a skateboard who fell, but you put country music behind it. All of a sudden it's a country video.”

Each episode needed about 30 clips. But the tapes weren't coming in fast enough — and what was on them often wasn't good enough either.

So Skogmo searched the Internet. That led him to YouTube and a trove of user-generated videos. Up until then “Country Fried Home Videos” relied on print ads and billboards at county fairs to solicit submissions. Now Skogmo could email and message video owners at will.

“By the end of the season, I ended up getting more videos than my supervising producers,” Skogmo said. “Next thing you know, I'm producing the show.”

Skogmo stayed on “Country Fried Home Videos” for four seasons before joining other clip shows like Discovery's “Destroyed in Seconds.”

Then he had a eureka moment at a trade fair in Cannes in 2009. Sent to buy licensed content for a TV show, he figured that the real money was in owning and licensing these digitally recorded moments of serendipity.

User-generated videos are like the caramel corn of the entertainment world. They're simple, satisfying and over in one quick bite. They also don't require much expense and aren't bound by different cultures.

“An ouch is an ouch in any language,” Skogmo likes to say.

And there are a lot of ouches. Thanks to proliferation of cellphones and high-definition cameras and the irresistible urge to share them on social media, these clips are more popular and easier to find than ever before.

With Jukin, Skogmo aims to lock down the best soon-to-be viral content on the Internet. He does this by offering creators one of two things: an outright purchase of the clip or a revenue-sharing deal.

The latter is less predictable but potentially more rewarding because creators can reap YouTube pre-roll ad revenue in perpetuity. They also get a cut of any licensing fee a TV show or website pays to use their clip.

It's a new twist on a market built by “America's Funniest Home Videos,” which offered cash prizes to top clips. Jukin, however, pays for potential.

Jared Frank, better known as train-kick selfie guy, is estimated to have earned anywhere from $30,000 to $250,000 after striking a revenue-sharing deal with Jukin to license the video to its stable of business partners such as the Huffington Post and ABC News. Skogmo declined to say how much individual clients have earned, and Frank did not respond to a request for comment.

Software alerts Jukin's researchers when a video clip is quickly amassing views on, say, Facebook, YouTube or Instagram, before the rest of the Internet notices. Fails are great, but cute babies, funny animals and clips featuring women in bikinis doing acrobatic or clumsy things are also desirable.

When a target is identified, the race begins to locate its creator. In the most extreme cases, Jukin has hired private investigators to track someone down.

When a Jukin video appears on TV shows such as “Good Morning America” and “Today,” networks pay from $500 to $1,500 to license the clip. Websites such as Huffington Post pay about 25 percent less for the same licenses.

Jukin also places video on YouTube and Facebook, where one of its biggest brands, Fail Army, counts 10.4 million subscribers and 7.4 million likes, respectively. Viral videos typically net $2 in pre-roll ad sales per 1,000 views — and Jukin's most popular videos regularly rack up tens of millions of eyeballs.

Advertisers who want to use a Jukin clip in a commercial must pay at least five figures. Through these revenue streams, Jukin says its video creators have collectively earned at least $5 million.

A big reason that Jukin can keep paying is that it polices the use of its licensed material. Jukin has one in-house attorney and a team of up to 12 staff members trawling the Web and TV for violators.

“If you're a person who happened to create a viral cat video or fail video, Jukin is saying, ‘Hey, you've got one shot to make money off of it. Don't let someone else use it for their own channel and profit,'?” said Eunice Shin, managing director at Manatt Digital Media, a consulting, venture and legal services firm. “It's a great model, and it gives back to owners what is due.”

PREVIOUS ARTICLE
Article 37 of 98
NEXT ARTICLE