After years in Hunt Valley, fundraiser for fight against breast cancer returns to the city 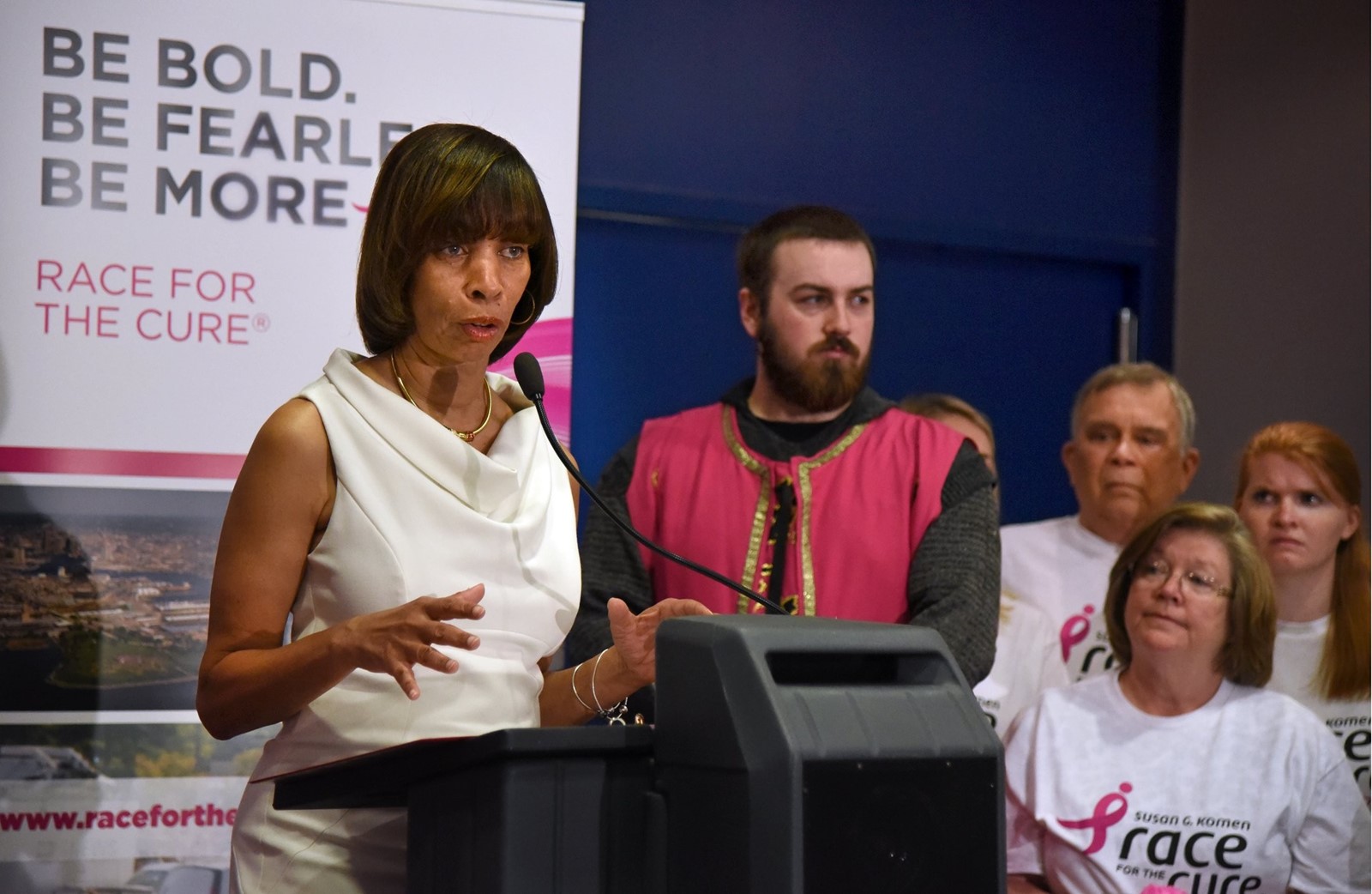 The Susan G. Komen Race for the Cure will return to Baltimore City for its 25th anniversary this fall, a move welcomed by city leaders for the attention the event draws and the potential for millions in economic impact.

The race will be one of the city’s biggest, with an expected 8,000 to 10,000 runners and walkers for the 5-kilometer course through South Baltimore, beginning and ending at McHenry Row and including a loop in Fort McHenry National Monument and Historic Shrine.

“This will showcase a part of Baltimore many people have not seen yet,” said Mayor Catherine Pugh, an avid runner who is often seen on the local racing circuit. “People come from around the country, families supporting families, friends supporting friends.”

The event is Komen’s biggest fundraiser of the year and is expected to generate around $850,000, funds that are dedicated to local breast cancer programs and national research. The Maryland chapter has raised $39 million since 1993 for these causes.

Maryland has the sixth-highest death rate from breast cancer in the nation. More than 5,250 women are expected to be diagnosed this year in the state. Nationally, one in eight American women will receive a breast cancer diagnosis. It’s the most common kind of cancer in women and the second-most-deadly behind lung cancer.

The race’s return to Baltimore is a homecoming. The event began locally in 1993 at Rash Field in the Inner Harbor but has taken place in Hunt Valley for the past decade. The race is scheduled for Oct. 15 and is open to runners and walkers. A 1-mile family fun walk also is scheduled.

“After 10 years we’ve come back to Baltimore, and this gives us an opportunity to bring our loyal participants to the city and draw in new people from other areas,” said Rachel Duncan, president of the Komen Maryland board.

Komen officials and Pugh announced the event at the McHenry Row shop of Charm City Run, which organizes and supports races throughout Baltimore and plans to participate in the Komen race.

It’s one of many businesses expected to be involved and to benefit, said Mark Sapperstein, who developed McHenry Row, the Locust Point mixed-use development that opened in 2011 with small shops, restaurants, apartments and a Harris Teeter grocery store as an anchor.

“Our tenants are eager to host,” he said. “We expect many to step up and help.”

Daraius Irani, chief economist for the Regional Economic Studies Institute at Towson University, has studied the impact of the Baltimore Running Festival and said the Komen race could produce about a third to 40 percent of that effect, based on its size.

About 25,000 people participate in the festival, which includes a marathon, half-marathon and other events. This year’s marathon is scheduled for about a week after the Komen race in October.

The Komen event was once as big, drawing 30,000 participants with fundraising goals of $3 million for its causes, but participation dropped off after a political flap in 2012. That’s when the national organization said it would stop funding Planned Parenthood centers, which offers breast cancer screenings along with abortions. The group quickly reversed itself and the Maryland chapter had never funded Planned Parenthood programs.

But local Komen officials acknowledged that the incident hurt fundraising. More recently, officials said the smaller race now reflects competition with other events and the economy.

Irani said he didn’t think the back-to-back scheduling would affect either event because they likely won’t attract the same people to participate and watch, since marathon runners tend to be focused on the athletics and Komen participants are primarily interested in the charity.

About 80 percent of the Komen participants will walk rather than run, many in support or in memory of a family member or friend, according to organizers.

Irani calculated the Komen race could generate about $11.6 million in economic impact, including spending by participants and spectators on food, lodging and souvenirs, as well as spin-off from temporary jobs and purchasing of supplies such as T-shirts and medals.

Marathon participants spent about $316 each over the course of the Baltimore Running Festival weekend in 2014, when the Regional Economic Studies Institute last surveyed the event.

“You really want to get people from out of town, and by that I mean out of the city, spending money,” Irani said. “A lot of restaurants and shops find it useful to offer coupons to participants to attract them, like a free appetizer at a restaurant or discount at a store.”

Baltimore’s gain this year is Hunt Valley’s loss. The race was no doubt a one-day boon for area restaurants and retailers, though smaller now than in past years.

Baltimore County officials did not comment on the economic cost of the race moving to the city.

“We have enjoyed a very positive partnership with Komen Race for the Cure and have been proud to be a part of their successful efforts,” said Ellen Kobler, a county spokeswoman, in a statement. “We wish them the best as the race moves down the road into Baltimore City. Like so many of the regional sports and cultural institutions downtown, we are confident that Baltimore County residents will still be enthusiastic participants.”

Local neighborhood associations, accustomed to such events, say they will work with race organizers on planning.

PREVIOUS ARTICLE
Article 17 of 78
NEXT ARTICLE