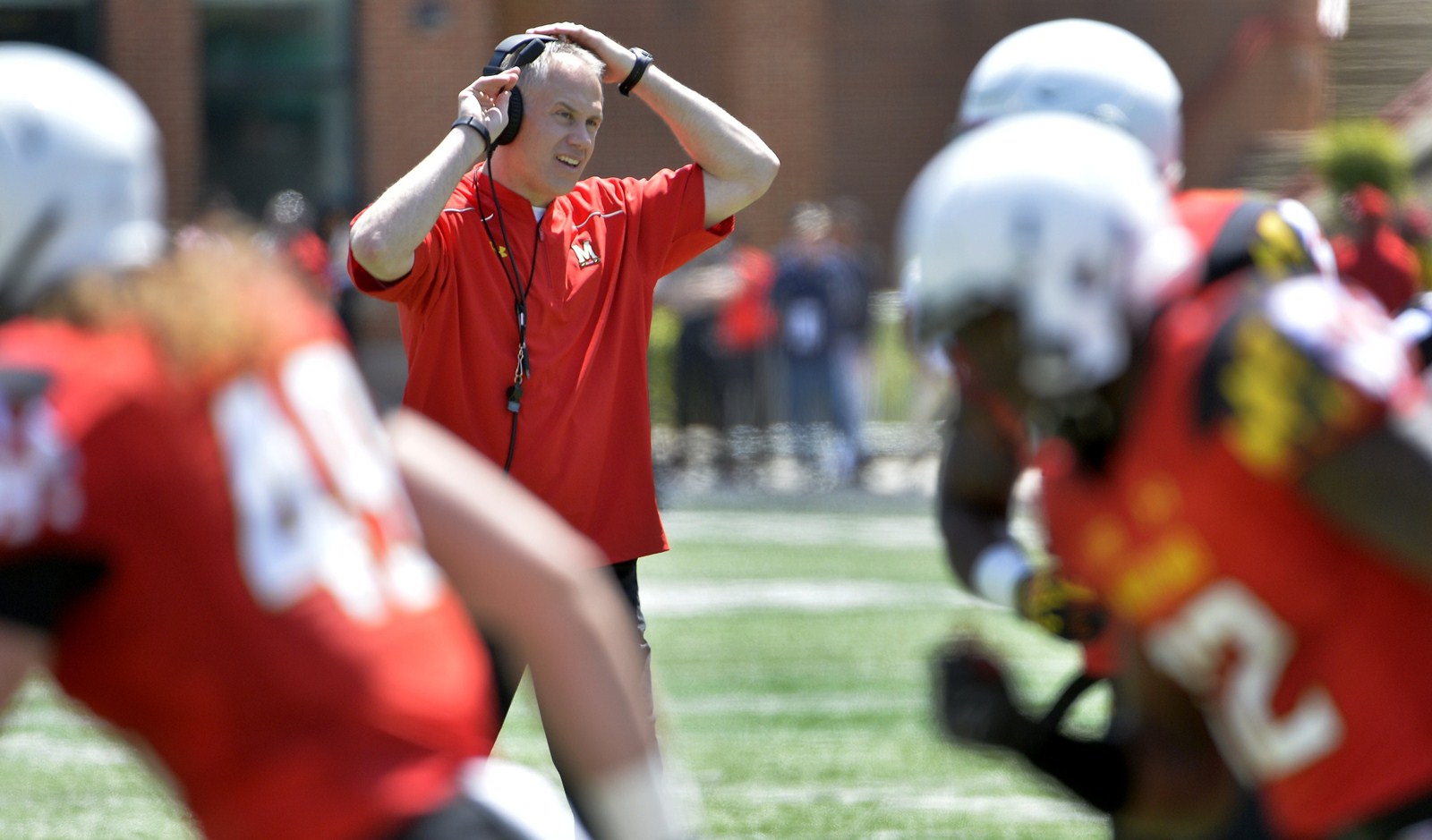 DJ Durkin took the job as the Terps football coach nearly 11 months ago. “In this profession, you're never in charge of your own destiny, but as a head coach you have more control,” he said. ( Mark Gail/For the Washington Post )
PREVIOUS IMAGE

Sarah Brumback never moved growing up as a child in Cincinnati, leaving for the first time when she went off to college at Bowling Green.

It was there she met and started dating her future husband, a football player named DJ Durkin. As his playing career was about to end, he mentioned that he planned on becoming a college coach.

“We were still dating when I was a graduate assistant coach. She knew what she was getting into, and we had a lot of those conversations ahead of time,” Durkin said Tuesday. “Sometimes it's hard if you've already been a coach for eight, 10 years and you meet someone. It is a different lifestyle. It takes a special person, a special woman to do it.”

The Durkins have made six moves since they were married in 2002 and spent no more than five years in the same place. That was at Florida, where their children, 6-year-old Abigail and 3-year-old Luke, were born.

The Durkins hope their latest move, to Maryland 11 months ago, lasts a lot longer.

“We came here with a purpose, to build this thing right with the intent of being here,” said DJ Durkin, who signed a five-year contract worth more than $2.5 million annually.

Said Sarah Durkin, “I guess in this business, you never know how long you're going to be somewhere, so my goal is to make it a home as quickly as possible.”

DJ Durkin, 38, can point to some of the moves he made that had nothing to do with the job he had done.

Durkin's move came amid speculation that Harbaugh was going to leave for the NFL after interviewing with the New York Jets. Harbaugh left to become coach of the San Francisco 49ers in 2011.

In 2015, Durkin left Florida to rejoin Harbaugh at Michigan as defensive coordinator after finishing his time with the Gators.

Durkin will face Harbaugh for the first time as a head coach when the Terps play the No. 3 Wolverines on Saturday in Ann Arbor, then go up against Meyer, now at Ohio State, the following week at Maryland Stadium.

“In this profession, you're never in charge of your own destiny, but as a head coach you have more control,” Durkin said. “As an assistant, you're at the mercy or hands of someone else — good or bad.”

This represents one of the more interesting stretches in Durkin's first season as a head coach. For Sarah Durkin, today and Saturday will be a time to catch up with old friends in Ann Arbor.

“I have a lot of friends on that staff. It's never easy to play your friends,” Sarah Durkin said. “But for me, friendship trumps football. I will probably see those women and it's not going to be weird — they're my friends.”

Yet, as she sheepishly acknowledged, “I certainly want to get a win.”

Despite a difference in age, the Durkins were extremely close with 66-year-old Michigan defensive line coach Greg Mattison and his wife, Ann.

They first met when DJ Durkin was a graduate assistant at Notre Dame in 2003 and 2004, and Mattison — who later became a Ravens assistant under John Harbaugh — was on the staff of Ty Willingham.

“Just the way they have for so many years, they've been wonderful parents and wonderful husband and wife to one another,” Sarah Durkin said. “They've moved a lot. They've been very instrumental in our lives and as a couple, just sort of how it should be done.”

Since being hired as Maryland's coach last December, DJ Durkin and his family have lived in their Kensington home longer than in their house in Ann Arbor.

“Come December, we will have lived in Maryland twice as long as we lived in Michigan,” Sarah Durkin said. “In regards to the move to Michigan, obviously it's nice you have a little more stability as a head coach. … I felt more settled here in our first two weeks than I ever did in Michigan.”

It was Moira Anderson who pulled Sarah Durkin away from the news conference after her husband was introduced as Maryland's new coach to go to lunch at the Turgeons' house. It was the start of what has become a close friendship between the two coaches and their families.

Though the Turgeons are older, as are their children, the families have become close, with their houses only a couple of streets apart.

“She's become a really good friend of mine. I adore her kids and her extended family,” Ann Turgeon said last week. “It's been really fun for us. … When you're a [coach's] family, you often don't have your family nearby, and your staff and their families and the Durkins become your family.”

Said DJ Durkin: “It's been huge. More than anyone could expect. They've been great to us. It's been great for Sarah because Ann's another person that would understand. Even family — my parents, her parents — don't understand what it's like to do that. It's different.”

The morning after Durkin suffered a second straight loss, at home to Minnesota, after a 4-0 start, Mark Turgeon texted him kiddingly, saying, “I told you it wasn't going to be this easy.”

Sarah Durkin said she hasn't seen much change in her husband in the nearly 11 months since he took the job at Maryland.

“DJ's really the same person. I've never seen a job change who he is,” Sarah Durkin said. “I think there's more added pressure because you're in charge of so many people and their families, and there's more a sense of responsibility.

“And as families transitioned here with us, we know the stress that puts on a wife and a marriage and the kids.”

What makes the transition easier is sharing this journey with his wife, DJ Durkin said.

“The way you have to treat it, the way we treat it, this is our profession,” he said. “It's our job. She's very involved with our team, with our players, with what we do. You spend so much time in football, if you don't include your kids, your wife, your family, then you're missing out on too much.”

PREVIOUS ARTICLE
Article 54 of 96
NEXT ARTICLE