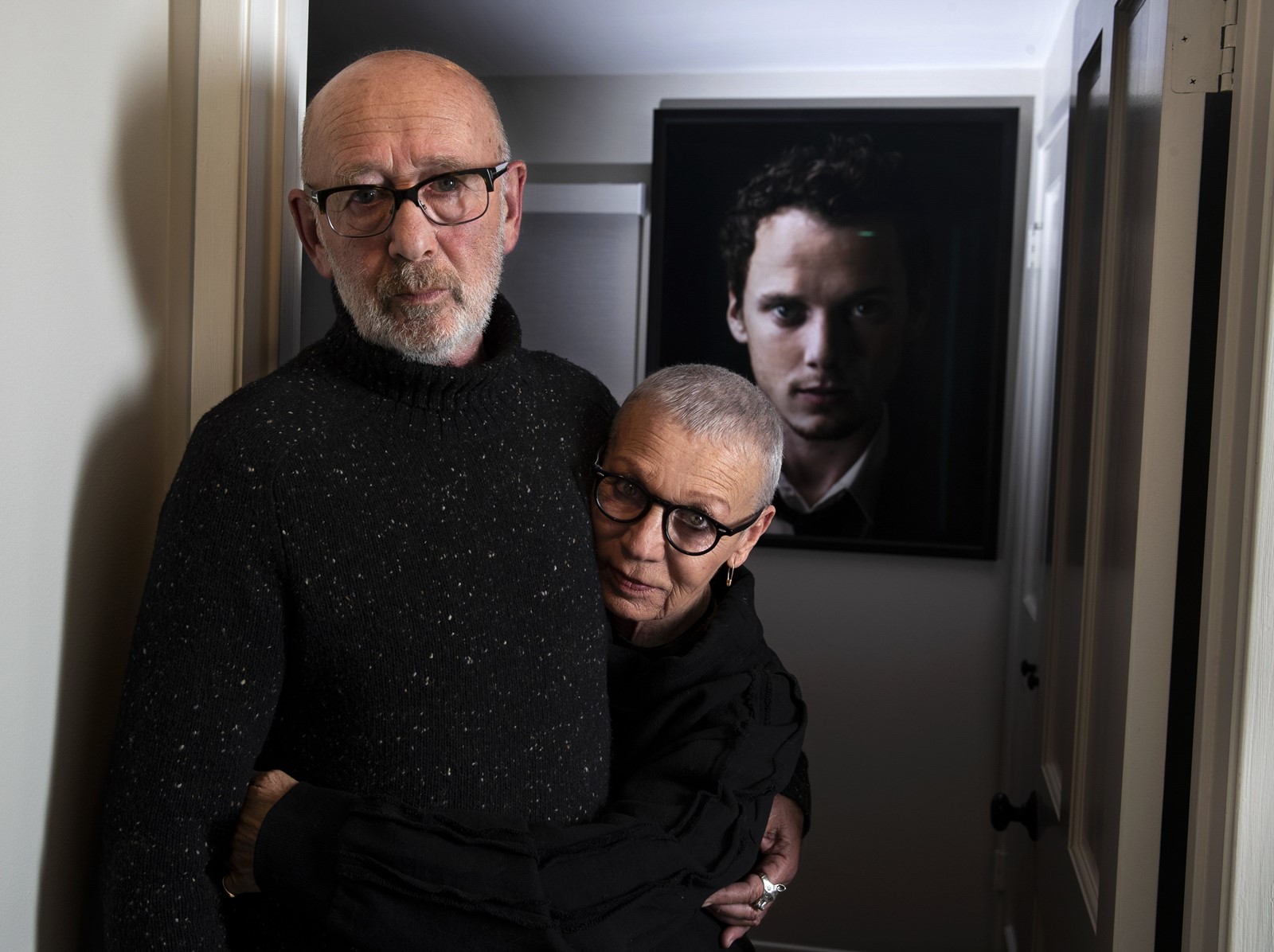 Viktor and Irina Yelchin have worked to memorialize their son, Anton Yelchin, since the 27-year-old actor was killed in 2016 when his Jeep malfunctioned and crushed him. Their latest project is the film “Love, Antosha.” (Mel Melcon/Los Angeles Times photos) 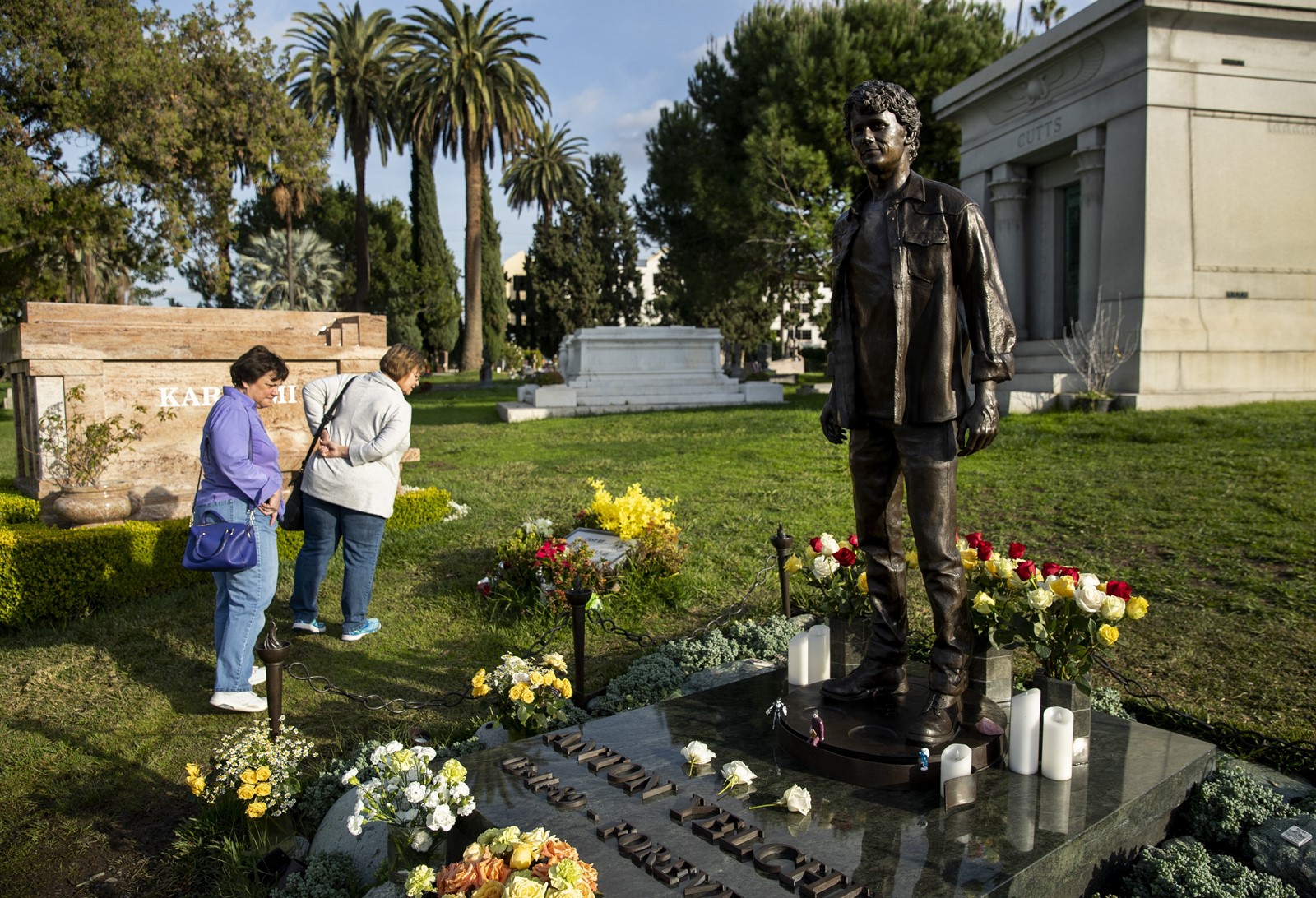 Yelchin’s parents had a statue of the “Star Trek” actor erected at his grave in the Hollywood Forever cemetery in California.
PREVIOUS IMAGE

Anton Yelchin’s parents live where their son died. After his sudden death nearly three years ago, Viktor and Irina Yelchin couldn’t bear the thought of selling Anton’s home. He’d been obsessed with the place in Studio City, planting himself on his recliner sofa most nights with a bowl of pretzels, his Brussels Griffon dog, Elvis, and a stack of movies to watch until 3 in the morning.

So even though it was in the driveway that his Jeep malfunctioned in 2016, rolling downhill and pinning him against a gate, this is where his parents felt they had to be.

“It’s difficult, but we feel his presence,” said Viktor, sitting on his son’s favorite leather sofa last week as the rain pattered on the roof. “We’re closer to him, even if it’s very hard.”

“It’s hard to walk there,” Irina said, her voice breaking as she motioned toward the driveway. “It’s hard to live. But we are. So we have to do something while we’re here.”

The couple have already done a number of things in tribute to their son, an actor who amassed close to 70 film and TV credits — ranging from the most recent “Star Trek” reboots to “Hearts in Atlantis” and “Curb Your Enthusiasm” — before his death at the age of 27. They erected a statue in his likeness at Hollywood Forever cemetery and donated $1 million to the newly named Anton Yelchin Cystic Fibrosis Clinic at Keck Hospital of USC, where he received treatment for the disease.

But at the Sundance Film Festival on Monday, they were set to debut their greatest labor of love: “Love, Antosha,” a documentary that celebrates the actor’s legacy.

The documentary was the brainchild of one of the actor’s co-stars: Jon Voight, with whom he appeared in 2015’s “Court of Conscience.” After his death, Anton’s parents were sharing their grief with Voight, telling him how “we don’t see any reason to live anymore, that our whole life is over,” Viktor recalled. “He said, ‘Why? You have to live. Make a documentary and keep his memory alive.’ ”

“Everyone was saying how brilliant and talented and smart and kind and tenderhearted he was,” Irina said. “Maybe because of that. Maybe because he never left, truly.”

At Voight’s suggestion, the couple began pursuing the film idea more seriously, reaching out to Abrams for advice. The filmmaker suggested that someone who actually knew Anton should work on the project, so immediately Viktor and Irina thought of Drake Doremus, the director behind “Like Crazy” — one of Anton’s most beloved projects (and a Sundance grand jury prize winner in 2011).

Doremus felt he was too close to Anton to make the movie — they’d developed a close friendship after shooting the indie love story. So he enlisted his American Film Institute buddy, Garret Price — who’d never met Anton — to helm the project.

“It was so important the filmmaker didn’t know Anton and was objective,” explained Doremus. “It’s not like this is a perfect human being. There is so much darkness and truth in this, and that’s what Anton would have loved. He would have loved that it’s the truth, as opposed to a perfectly glossed-over version of a 27-year-old life.”

Perhaps the biggest revelation in the film is just how much Anton struggled with cystic fibrosis — a diagnosis he hid from the public and the entertainment business. As a precocious kid, he was pink-cheeked and enthusiastic, shooting short films with childhood friends and constantly performing impressions for his parents. He never seemed sick and barely demonstrated any signs of someone with the progressive disease, which causes mucus to form in the lungs.

In fact, he appeared so healthy that his parents decided not to tell him the full details of his diagnosis — CF patients have a life expectancy of around 37 — until he was 17.

Upon learning about his illness, Anton worked hard to stay healthy, constantly running up and down the stairs and researching herbal remedies to try on top of his prescribed medications. Before long days on set, he’d wake up two hours early to put on an inflatable vest that helped him to clear his airways.

Prior to his death, Anton had booked the show “Mr. Mercedes,” and he told his parents he was ready to publicly share his illness on the press tour. That’s the only reason why they said they decided to reveal his diagnosis in the documentary, which they hope inspires others with illness to live life to the fullest.

The film shows how eager Anton was to dive into artistic pursuits, spending hours marking up scripts, venturing downtown to shoot photography at seedy dive bars and performing in his own band. He cultivated a close group of friends and admirers, including Stewart, who admits in the movie that Anton “kind of, like, broke my heart” at age 14 after they appeared together in “Fierce People.”

“We had talked about that over the years, but I never in a million years thought she would be comfortable with sharing that,” said Doremus. “But it’s so important that she did, because it really reflects on Anton’s relationship with women and understanding his relationship with his mom.”

PREVIOUS ARTICLE
Article 72 of 102
NEXT ARTICLE