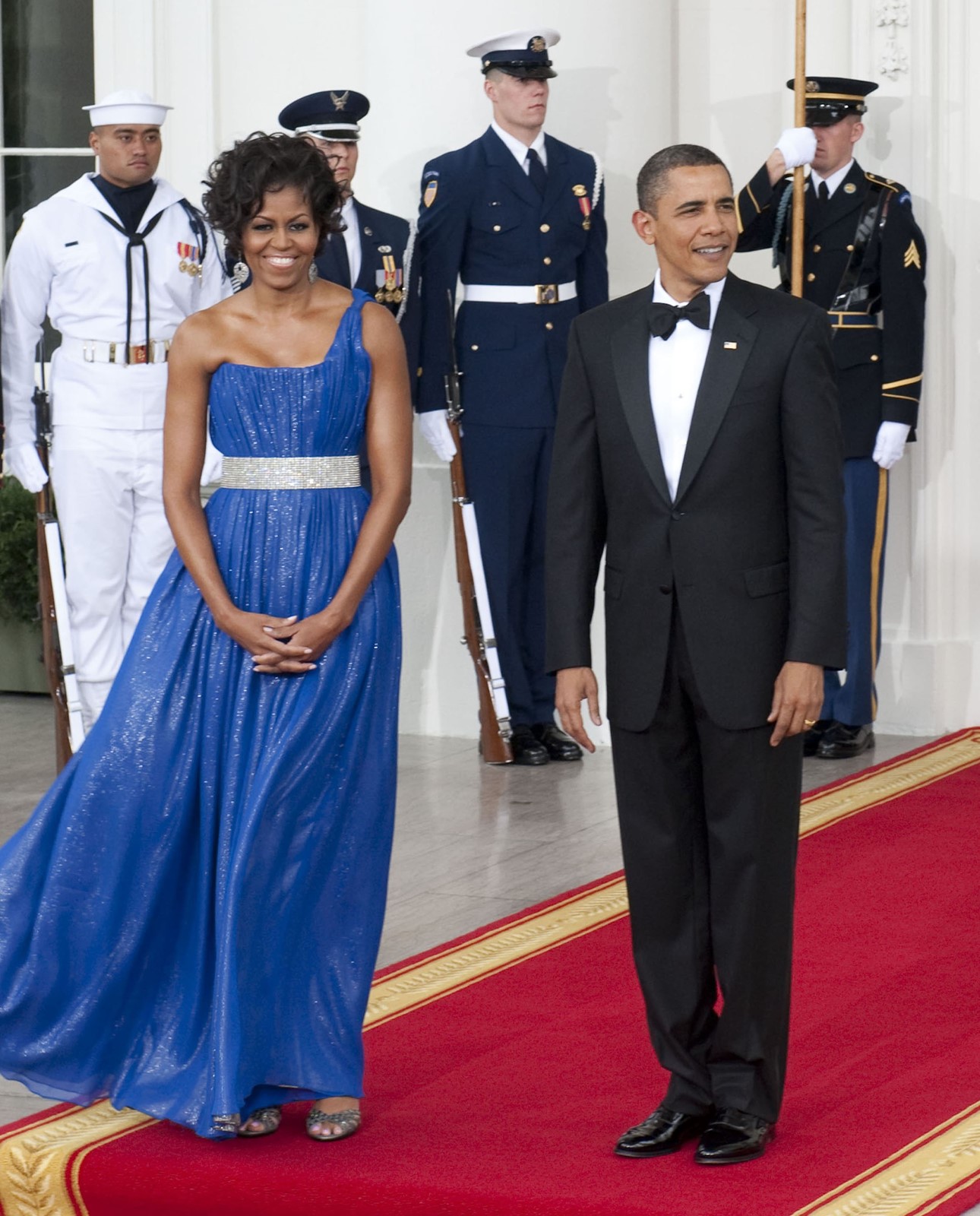 At the Hay-Adams hotel this fall, members of Washington's diplomatic community gathered for a conversation about fashion. About clothes and their place on the world stage.

The program, hosted by the State Department and Elle magazine, included a panel discussion that featured designer Derek Lam. When the conversation came around to first lady Michelle Obama, Lam dropped his head in a mournful manner and lamented: Her departure from the East Wing signals the end of a singular era for American fashion.

Obama brought widespread attention to Seventh Avenue. She energized designers, editors and stylists with her fashion-forward wardrobe choices. She's been an exemplar of modern, fit and confident middle age. She instilled pride and kinship among countless black women.

Lam is among the many Seventh Avenue designers whose clothes have been part of the first lady's public wardrobe and whose life story has been fundamental to her version of fashion diplomacy. Obama wore Lam's block-printed dress for her arrival in Beijing in March 2014. The dress was contemporary, sophisticated and sleek. But there was more: Lam, who grew up in San Francisco, is of Chinese descent. In wearing his design, Obama quietly noted that in addition to trade agreements and intellectual property concerns, there is a real, human connection between the United States and China.

But what is the totality of her fashion legacy? When Obama leaves the White House in January, what precisely will she leave behind besides multiple covers of Vogue and an impressive array of evening gowns destined for a presidential library?

Obama was good for fashion. Mostly because she got people talking about it. But look closely and see that the bright light she shone on fashion also revealed the challenges of the business. Her mid-market wardrobe choices sparked sales. But her attentions could not save those same brands from the financial pressures of a recession or overexpansion.

She underscored how most fashion companies are not big, publicly traded corporations; they are the very definition of small businesses. She thrust once little-known brands — Jason Wu, Brandon Maxwell, Maria Cornejo, Maria Pinto — into the spotlight, giving them priceless publicity and a leg up in expanding their business.

Obama had the ability to spark a shopping frenzy. One researcher tracked Obama's ability to create consumer demand and estimated the “Obama effect” was worth $38 million to a company.

And she connected fashion to the broader popular culture. “Fashion is really about passion and creativity, just like music or dance or poetry,” Obama said when welcoming students at the White House.

What was it about Obama's clothes that kept people talking? What made critics roar over her bare arms when she wore a sleeveless Narciso Rodriguez dress to her husband's first address to Congress? Jackie Kennedy had done so decades earlier. But Kennedy was not a statuesque black woman with muscular arms. The fascination with her style has not simply been about the clothes, but the body in them.

A lot of people had never seen a black woman so confidently glamorous, one who had not won an Oscar or a Grammy or spent her professional life raising Cain on reality television. Obama was not model-thin; she wasn't an ingenue. She was a grown-up with an impressive resume staking her claim on fashion.

It wasn't that women like Obama didn't already exist. They did. Her Chicago social circle was filled with women who shopped at the upper echelons of fashion, who saw vanity as a form of empowerment.

She was their representative on the world stage. And her wardrobe choices underscored a simple but often overlooked aspect of fashion: It should be a confidence-building pleasure, not a burden.

Obama has done a lot toward normalizing our relationship with fashion. Still, the industry does not stand equally alongside other branches of popular culture. “I don't know anything about fashion” remains an acceptable answer from our leaders to a question about Seventh Avenue. But should it be? Shouldn't the occupant of the West Wing at least express curiosity and excitement about an industry that churns out some $350 billion in sales in this country?

It falls to the next residents of the White House — one of whom is a former model — to bring fashion fully into the fold. And doing so requires not just selecting a wardrobe that reflects occasion, personality and modernity, it also means being willing to discuss it with ease and thoughtfulness.

If an All-Star baseball game can get a visit from the commander in chief, why not the opening of Fashion Week in New York?

And if it's worth it to ask, “What's on your summer reading list?” why not also, “What's new in your closet?”

PREVIOUS ARTICLE
Article 40 of 97
NEXT ARTICLE