‘Trial of the century'?

O.J. Simpson's murder trial was good TV then and now, but was it really legally significant? 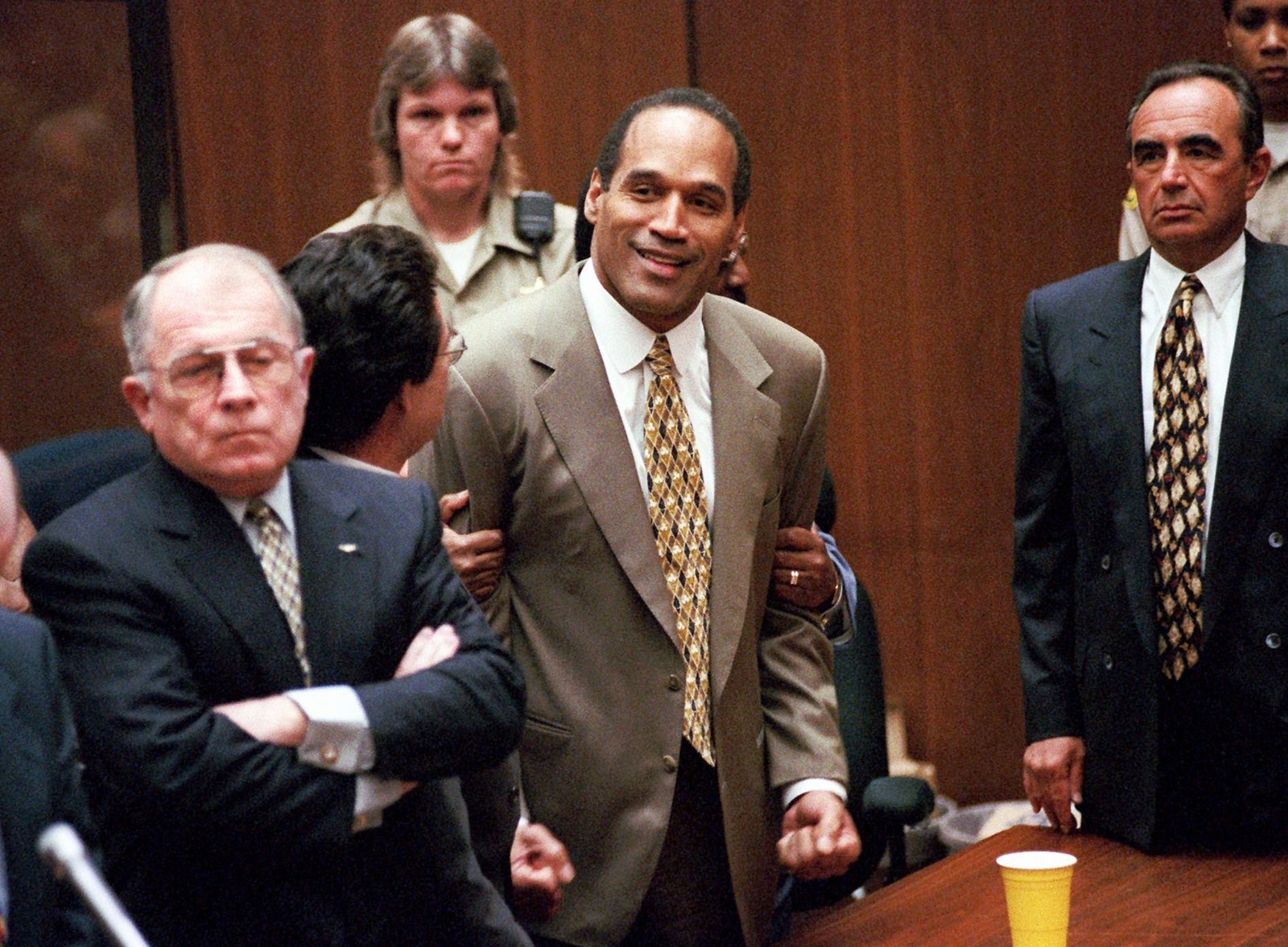 In this Oct. 3, 1995, file photo, O.J. Simpson, center, clenches his fists in victory after the jury said he was not guilty of murder charges. ( Myung Chun/AP )
PREVIOUS IMAGE

Fascination with the 1995 case, in which Mr. Simpson won acquittal but not exoneration, bloomed recently with the campy 10-part miniseries, “The People vs. O.J. Simpson,” shown on the FX cable channel to mostly favorable reviews. Fascination is sure to deepen with the television premiere Saturday of “O.J.: Made in America,” ESPN's five-part documentary about Mr. Simpson's career and fall from celebrity-hood after the 1995 court proceeding.

The trial went on for eight months and seemed to press every hot-button issue of American life: race, class, wealth, celebrity culture, domestic violence, media hype, and police misconduct, all of which resonate these days. But more than two decades later, can it accurately be called — as it was labeled at the time — the “trial of the century”? Looking back, was the O.J. murder case that singular?

As the passage of time has made clear, Mr. Simpson's trial was no landmark in American jurisprudence. While the trial certainly did introduce the marvels of forensic DNA to mainstream America — an important contribution — it brought no important or lasting effects to the legal system.

“It was a highly publicized trial that established no real important legal principles,” Alan Dershowitz, one of Simpson's many lawyers in the case, acknowledged a few months ago in an interview with Business Insider.

The case was often-compelling drama fueled by superb plot twists, such as the prosecution's ill-considered decision to ask Mr. Simpson to try on leather gloves that the killer was believed to have worn while fatally slashing the victims. The gloves, which the prosecution later said had probably shrunk from being blood-soaked, didn't quite fit Mr. Simpson's hands, as he theatrically showed the jurors.

The botched demonstration was a stunning turning point of the trial. And it gave rise to perhaps the most memorable line of the case, spoken in closing arguments by Johnnie L. Cochran, Mr. Simpson's lead lawyer: “If it doesn't fit, you must acquit.”

Almost as memorable was the impromptu, nationwide vigil that attended the close of the trial. As the verdicts were about to be read on Oct. 3, 1995, untold thousands of Americans from all walks of life stopped what they were doing and gathered at TV sets to watch the outcome. Beaches near Los Angeles were reported to be nearly deserted, even though the weather was summer-like that day. Passengers at airports in Atlanta and Chicago refused to board flights and gathered near television monitors in waiting lounges. News conferences were postponed on Capitol Hill and at the White House, President Bill Clinton slipped into an office where a TV set was on.

It was an extraordinary moment, and one of the last great news events in which the Internet — which was just entering the popular consciousness in 1995 — played no central role. Television was the dominant medium of the O.J. trial, and many Americans tuned in routinely to the proceedings, which at times invited comparisons to an afternoon soap opera. Or to “a great trash novel come to life,” as Dominick Dunne said in his reporting for Vanity Fair. Or to “a Bayeux tapestry of contemporary American culture,” as David Shaw of the Los Angeles Times wrote in the trial's aftermath.

But even in 1995, there were doubts about the “trial of the century” metaphor. Gerald F. Uelmen, another of Mr. Simpson's lawyers, reported then that his research into prominent trials of the 20th century found that contemporaneous news accounts described no fewer than 34 cases as the “trial of the century” or “crime of the century.” It was a long list that went back to the assassination of President William McKinley in 1901 and included the Lindbergh baby-kidnapping trial of 1935 and the Rosenbergs-espionage case of 1951.

While nothing in recent years has rivaled Simpson's as an absorbing, televised courtroom spectacle, the case is more accurately understood as “the most sensational trial of the 1990s.” To call it the “trial of the century” is to grant the fascinating case more significance than it merits.

PREVIOUS ARTICLE
Article 31 of 90
NEXT ARTICLE