If Ruth E. Carter’s work in ‘Black Panther’ wins Oscar, it would be historic 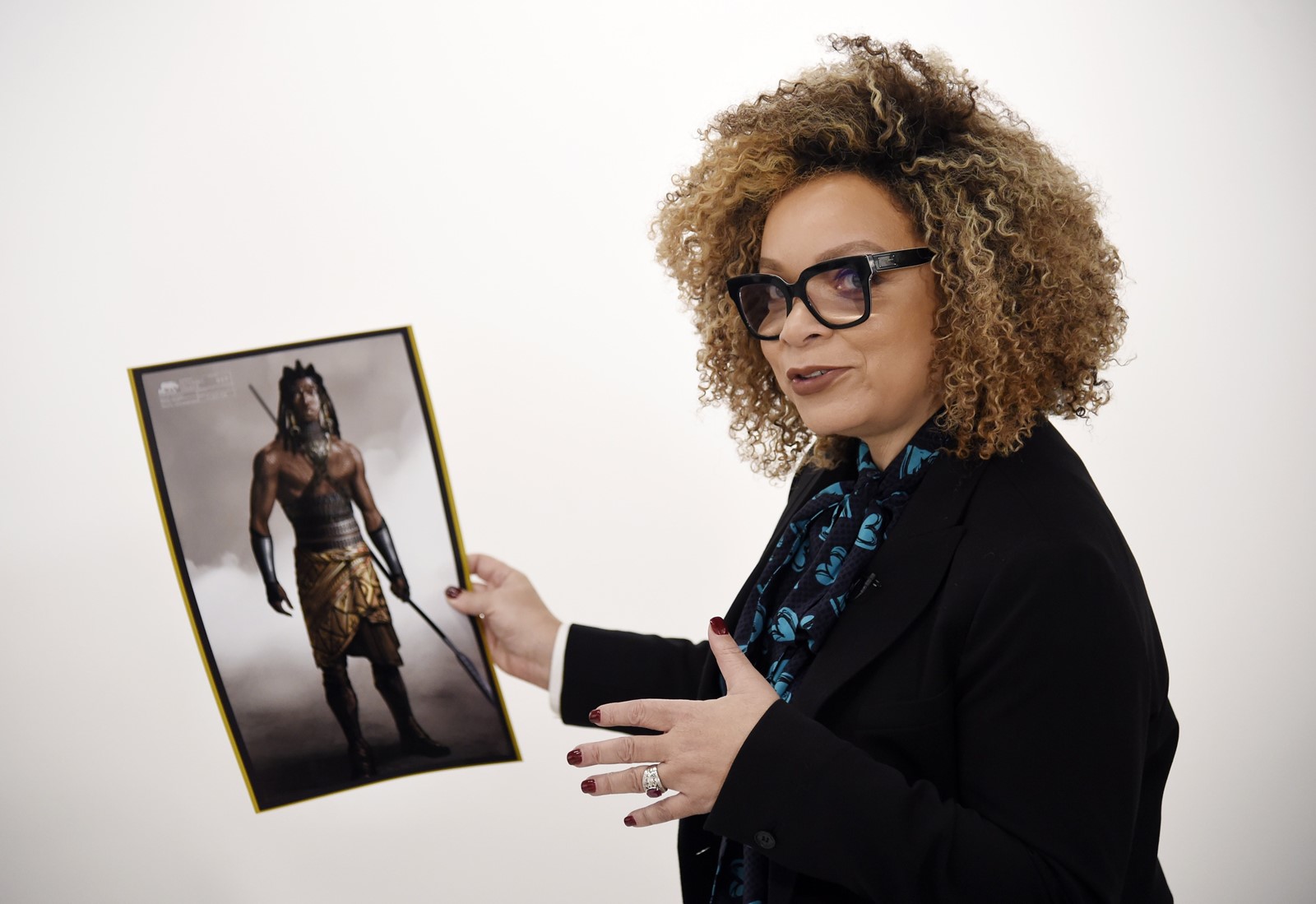 Designer Ruth E. Carter was nominated for an Oscar for best costume design for “Black Panther.” She says she tried to infuse her work on the film with the pride of African diaspora. (Chris Pizzello/Invision )
PREVIOUS IMAGE

Ruth E. Carter is a black woman blazing a trail as a costume designer in a film industry with not many who look like her. But through her upcoming career achievement award and Oscar nomination for her Afro-futuristic wardrobes in the superhero film “Black Panther,” Carter believes she can “knock down” more doors so others like herself can walk through them.

If Carter wins an Oscar for best costume design this month, she would become the first African-American to win in the category. Despite “very stiff competition,” Carter believes she has a good chance going up against Mary Zophres, Alexandra Byrne and three-time Academy Award winner Sandy Powell, who is nominated for “The Favourite” and “Mary Poppins Returns.”

“The designers are extremely talented designers, but I’m glad that I’m giving them a run for their money,” she added. “That’s how I feel. I feel empowered. I feel invigorated. I feel masterful.”

“She is one of my favorite people,” said Danai Gurira, who starred in “Black Panther” as Okoye, one of kingdom of Wakanda’s elite warriors. “I’ve adored her from the minute I met her. She deserves all the honors in what she’s done and accomplished in her astounding work of beautiful integrity.”

In three decades, Carter has been behind-the-scenes in some of Hollywood’s biggest films. She’s garnered Oscar nominations for her work in Spike Lee’s “Malcolm X” and Steven Spielberg’s “Amistad,” and received praise for her period ensembles in other projects such as Lee Daniels’ “The Butler,” Ava DuVernay’s “Selma” and the reboot of “ROOTS.” She’s created costumes for Oprah Winfrey, Denzel Washington, Eddie Murphy and even Jerry Seinfeld for the “Seinfeld” pilot.

Carter called the guild honor an “incredible achievement” for herself and others who desire to follow her footsteps.

“This award means so much to me,” she said. “I believe that I will stand on that stage and look out into the audience of young women and men that have careers in costume design that I helped foster. For that achievement, it means everything.”

Carter played an influential role as lead costume designer in making Ryan Coogler’s “Black Panther” a cultural phenomenon. She said she wanted to infuse the pride of African diaspora into the character’s stylish and colorful garments to help bring Wakanda to life.

“She gives you a wardrobe that helps enhance your character,” said Bassett, who played the mother of Chadwick Boseman’s heroic character T’Challa aka the Black Panther. She said she’s worked with Carter on other films, calling her “just warm, open, brilliant and she keeps fighting until she gets it right all the way to the end.”

Carter drew inspiration for the “Black Panther” costumes after traveling to Africa, speaking with people of the continent to understand the history of each artifact to ensure the different characteristics were represented properly in the film. She had help from her team of shoppers, illustrators and researchers, along with Marvel as the overseer.

All the preparation and hard work paid off. The costumes have become so popular that people from different ethnicities— young and older — have worn Black Panther-themed costumes to theaters and at parties. Some people are even discussing dressing in Wakanda couture for an Oscar brunch.

“I’m very proud to have given these children a new superhero,” she said. “I’ve met young ladies that have built their costumes with their father and went into great detail about how each part was made. I just felt like there was a paradigm shift. We just wanted to do something positive that was impactful and meaningful for people. You never know how it’s going to be received or looked at, but we felt like it reached everyone, not only African-Americans.”

Carter got her first start in 1988 on Lee’s “School Daze,” the director’s second film. They’ve since worked together on more than 10 films including “Do the Right Thing” and “Jungle Fever.” She’s also worked with Robert Townsend on “The Five Heartbeats” and Keenen Ivory Wayans on “I’m Gonna Git You Sucka.”

The early ’90s was a perfect time for Carter to enter into the film industry. She called herself lucky because she fit the mold for filmmakers such as Lee, Townsend and Wayans who were looking for a “new direction for the artistry.”

“They wanted someone who was just starting out with a fresh mind and maybe could bring new ideas to the industry,” she said. “I was that person. I bounced back and forth between New York and L.A. for like 10 years. That’s not usual.”

Carter said her career reached new heights after the Oscar-nominated “Malcolm X,” starring Denzel Washington. That film propelled her into the “Hollywood makeup,” offering her more opportunities to work with other directors who had different points-of-views and scripts.

Carter said she has absorbed priceless knowledge through the years, and doesn’t mind sharing it.

“I’m glad that I’m out there as the one knocking down the doors,” said the designer, who is currently working on “Dolemite Is My Name,” starring Eddie Murphy. “As a black woman, I’m a trailblazer. Since I’m blazing a trail, I need some people on it. And that’s fine.”

PREVIOUS ARTICLE
Article 21 of 145
NEXT ARTICLE