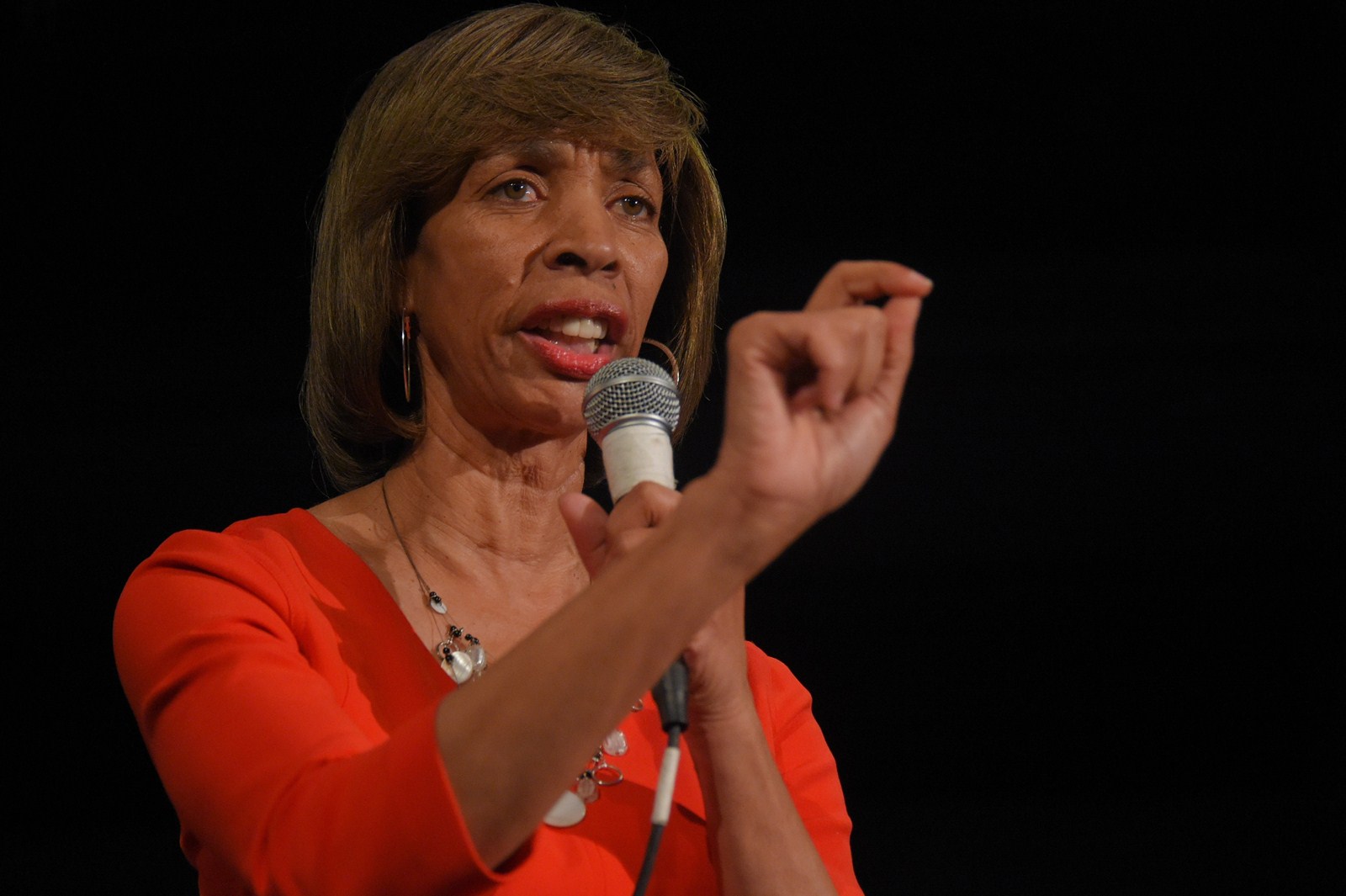 “We need to increase opportunities across the board,” says Catherine E. Pugh. “When we lift the least of us, we lift all of us.” ( Karl Merton Ferron/Baltimore Sun )
PREVIOUS IMAGE

Catherine E. Pugh says “change is on its way” in Baltimore.

The state senator won the Democratic nomination in last week's mayoral primary against a wide field of candidates who said the city needs a new direction. Pugh has promised to reach out to the disenfranchised by finding work for ex-offenders, improving long-neglected neighborhoods and recruiting activists such as Kwame Rose, whose profile rose during the unrest that followed Freddie Gray's death last year.

Yet Pugh's administration might not look that different from that of outgoing Mayor Stephanie Rawlings-Blake. Pugh has close ties to city officials and has pledged to keep several on board. She has been reluctant to criticize efforts undertaken by the lame-duck mayor, including a proposal that the city contribute $535 million to help finance the private redevelopment of Port Covington.

Pugh, a soft-spoken politician who warns not to “mistake meekness for weakness,” said her vision for the city builds on Rawlings-Blake's accomplishments. Too often, Pugh said during a wide-ranging interview with The Baltimore Sun, new officeholders want to scrap existing programs and rewrite policies after election.

“The way cities grow is, you build from where you are,” said Pugh, 66, who has held city and state elected offices since 1999. “We have a tendency as new leaders to throw the baby out with the bath water. It's almost like starting from the beginning all over again. You don't have to do that.”

Pugh faces Republican nominee Alan Walden and third-party candidates in November. But in heavily Democratic Baltimore, that party's primary has for decades determined who would go on to become mayor.

Political observers say Pugh is trying to chart a new direction while avoiding radical change that could be disruptive. On the campaign trail, Pugh frequently said she wanted to run a positive campaign and became the most likely to praise Rawlings-Blake and least likely to condemn her.

“Catherine Pugh was always the establishment candidate,” said Charles D. Ellison, who hosts “The Ellison Report” on WEAA radio. “I've heard from many people that think Pugh will be a lot like Rawlings-Blake.”

But Ellison said Pugh is “making some right moves optically,” noting that she has shown a willingness to listen to the activist community and has added to her inner circle people such as Del. Jill P. Carter, a state lawmaker known to buck the Democratic Party leadership.

Ellison said Pugh wants to balance “the business and political communities and the interests of working folks and poor folks.”

“She wants to be the one who can strike that balance in a way that Rawlings-Blake never did.”

Pugh is also expected to bring more connections to state power brokers than Rawlings-Blake. Pugh forged a close relationship with Senate President Thomas V. Mike Miller and has a better rapport with Gov. Larry Hogan, a Republican who said last week that Rawlings-Blake never thanked him for his help when unrest turned to rioting after Gray's death from spinal injuries suffered in police custody.

Hogan said he called Pugh after her victory and had a “lengthy conversation.”

“I would consider it an excellent relationship,” he said. “I consider her to be a friend.”

Still, Pugh is aligned in a number of ways with Rawlings-Blake.

In the days after the election, Pugh spokesman Anthony McCarthy joined the Rawlings-Blake administration to run her communications office until she leaves City Hall in December. Days before the election, Rawlings-Blake's chief of staff, Kaliope Parthemos, hosted a meet-and-greet for Pugh in Greektown.

Pugh, who raised $1.1 million, more than any other mayoral candidate, also has connections to Rawlings-Blake backers. Columbia-based financier J.P. Grant, among Rawlings-Blake's biggest supporters, gave thousands of dollars to Pugh.

And in one of her first pronouncements after her primary victory, Pugh said she plans to retain some of Rawlings-Blake's top officials, including Police Commissioner Kevin Davis and Health Commissioner Dr.?Leana Wen.

Pugh is quick to praise the programs she thinks are working well under Rawlings-Blake, such as Vacants to Value, an initiative the mayor designed to raze and redevelop the city's many blighted houses.

She has praised the mayor for cutting property taxes, investing in recreation centers and achieving the city's AA bond rating, its highest in more than 50 years.

“When people say to me, ‘What would you have done differently?' I can't criticize,” Pugh said. “We've done some things right, and credit should be given when credit is due.”

Pugh is unwilling to offer an opinion on whether the city should grant Sagamore Development public financing to turn Port Covington into a mixed-use development anchored by Under Armour's new headquarters. Billionaire Kevin Plank, CEO of Under Armour, owns Sagamore.

Critics have called the proposal a giveaway and bemoaned the fact the project does not include more affordable housing.

Rawlings-Blake and the current City Council will consider the proposal, which would provide financing for infrastructure costs, over the remainder of their terms. The council will be presented with a plan in the coming weeks for the sale of city bonds to pay for roads, parks and other projects that are part of the redevelopment.

Pugh said she does not want to “unduly influence that decision.”

“By the time I become mayor, Port Covington will be all said and done,” Pugh said. “I don't want to sit here criticizing something I am not fully aware of, nor do I want to put the mayor in the position of thinking about what this potential mayor coming in thinks. ... I am not even elected mayor yet.”

Pugh is prepared, however, to weigh in on another unresolved issue: legislation backed by City Council President Bernard C. “Jack” Young to strip future mayors of control over the city's purse strings. The bill would effectively end the city's “strong mayor” form of government.

Rawlings-Blake has promised to veto the legislation. Young is working to build enough council support to override a veto and send the proposal to voters for approval in November.

Pugh said she intends to encourage Young to back off the bill.

“I am going to talk to him about how important it is, if he were to become the mayor of this city one day, that he would have the same amenities as the previous mayors have had,” Pugh said. “It certainly helped William Donald Schaefer and Kurt Schmoke. We don't want to make it difficult for the mayor to get her job done.”

Like Schaefer, Pugh says she gets ideas to improve the city from a myriad of places. Pugh frequently points to Schaefer — who was mayor from 1971 to 1987 and is credited with reinventing the Inner Harbor — as one of the “greatest mayors of all time.”

She worked for Schaefer as his director of citizen involvement after moving to Baltimore from her hometown of Philadelphia to attend Morgan State University. He instructed her to “go out into the communities and make people feel safe.” She created neighborhood watch programs, expanded citizen patrols and offered crime-prevention tips in a television spot.

She wants to reintroduce a version of Schaefer's popular “dollar house” program through which the city sold homes for a dollar, move seniors from high-rises and shift money from traditional workforce development to partially paid apprenticeship programs for on-the-job training.

Another idea came to her after visiting a couple in Greensboro, N.C., several years ago. Their house was part of a suburban-style development in the city — with big lawns, driveways and garages. Pugh said a development like that in Baltimore could help expand the population.

Pugh also plans to seek the counsel of those who would be her peers. She wants to meet with Chicago Mayor Rahm Emanuel, for instance, to learn more about his approach to paying for infrastructure improvements, a constant need in Baltimore.

Other influences are less mainstream.

Pugh said she wants to include people with a variety of backgrounds and experiences in her administration — including Rose, the activist, whom she wants to name to an expanded youth commission. She joined Rose as he voted for the first time in last week's primary, and he was among a handful of people she thanked by name during her victory speech.

While the two had met previously, their most notable encounter came during the unrest touched off by Gray's death.

In a televised interview, Fox News correspondent Geraldo Rivera told Rose he was “making a fool” of himself as a group protested the curfew imposed after the previous night's rioting. Pugh was credited with defusing the situation, asking Rivera to move away from the crowd and expressing the community's frustration with police and the lack of opportunity in Baltimore.

“Oftentimes we look at folks who find themselves in confrontational positions and say, ‘Oh God, they're a troublemaker. They're this, they're that,'?” Pugh told The Sun last week. “What I found was a bright young man, one who I believe has a future.”

Carter, one of the first lawmakers to endorse Pugh's mayoral run, said Pugh might be seen as an establishment figure, but she frequently agrees with ideas pushed by activists.

“People say she's total establishment and I'm anti-establishment,” Carter said. “But it's not actually true. We're very similar on a lot of issues.

“She was allowed to participate in the political scheme in Annapolis more than I was. From Day One, I was deemed as a radical and outcast and very much marginalized. Quietly, I always worked with certain people to get things done, and Senator Pugh was one of them.”

Lawyer William H. “Billy” Murphy Jr., a Pugh supporter, said he believes Pugh will be a unifying force in Baltimore.

“She has the ability to get people to understand the benefit of including depressed communities ... into spending equations both in business and government,” Murphy said. “Today, people in this city understand a tinderbox is dangerous to every segment of the community, especially the business community. Cathy Pugh's central focus will be to include those parts of the community that have never benefited from city government.”

“We need to share wealth,” Pugh said. “We need to increase opportunities across the board. We need to understand, when we lift the least of us, we lift all of us. There are no throw-away citizens.

“That is the kind of mayor I am going to be.”

PREVIOUS ARTICLE
Article 24 of 139
NEXT ARTICLE