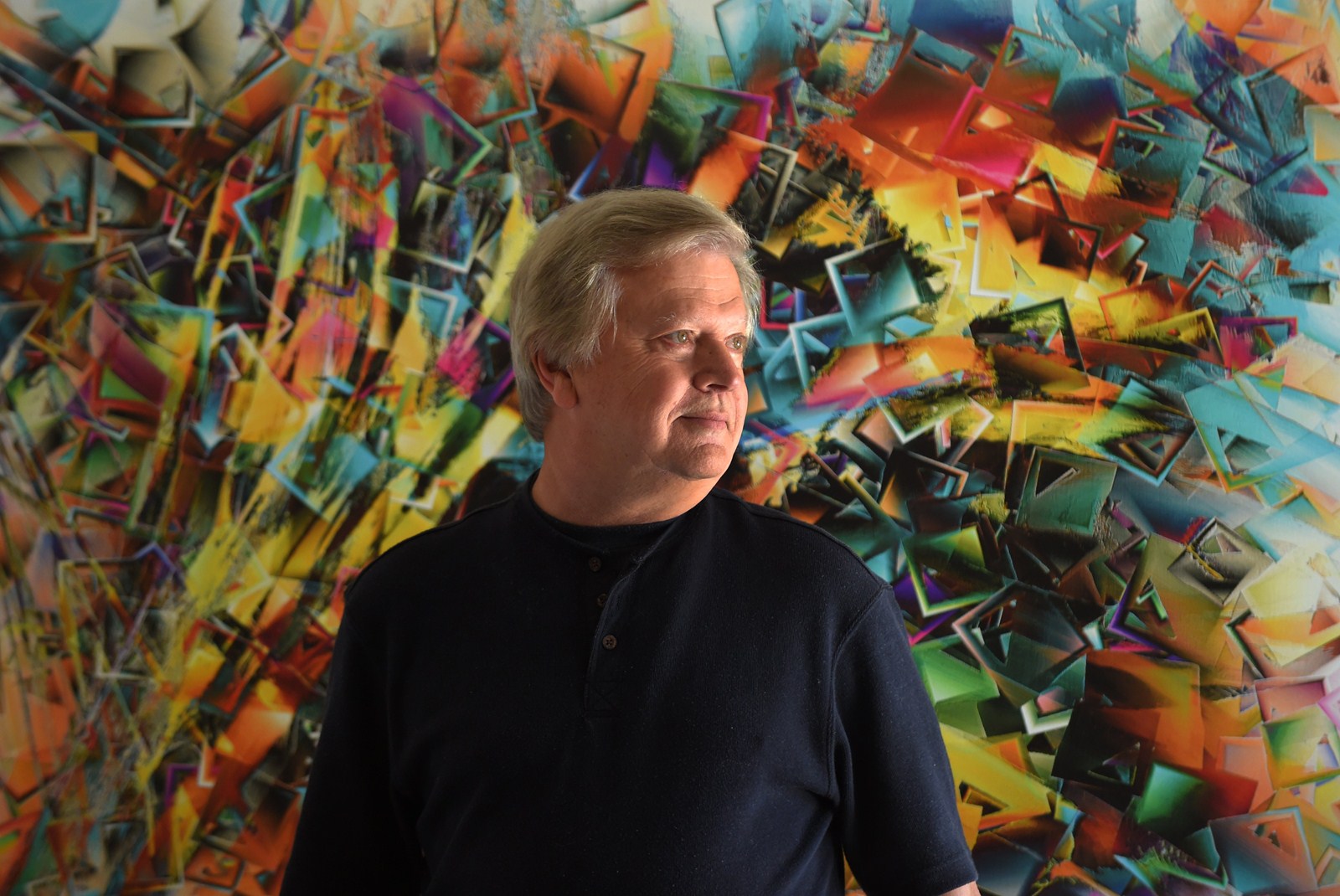 Gordon McGlothlin took a derivative of the hallucinogenic psilocybin in a smoking-cessation study at Johns Hopkins. Now, he says, “smoking has just become a nonissue.” ( Lloyd Fox/Baltimore Sun )
PREVIOUS IMAGE

Gordon McGlothlin, who took his first puff at age 12 behind his family's garage, tried to quit smoking for years, but no cessation technique worked until he used a psychedelic drug.

Researchers with the Johns Hopkins University School of Medicine gave the 69-year-old a derivative of psychedelic mushrooms similar to LSD, or acid, and watched him “trip” in a therapy room during six-hour sessions.

McGlothlin experienced wild hallucinations, including watching his body slowly unraveling until it disappeared into a puff of smoke. After researchers took his blood pressure, he imagined a red blood-like fluid covering him from head to toe.

After the third session, the artist had lost his urge to smoke.

McGlothlin was part of a group study on the effects of psilocybin, the active hallucinogenic ingredient in “magic mushrooms,” on smoking cessation. The study represents a resurgence in research at Johns Hopkins, New York University and other academic institutions looking at whether mind-altering psychedelics, such as LSD, mushrooms and ecstasy can be effective in treating a variety of emotional and addictive disorders.

McGlothlin, who was one of the study's early participants three years ago, had gone cold-turkey, attended smoking cessation classes and practiced behavioral modification. He said psychedelics gave him a sense of peace and clarity that enabled him to give up cigarettes.

In recent years, researchers have investigated a number of possible ways that psychedelics could be used therapeutically.

Last year, Johns Hopkins completed a study of individuals suffering from a life-threatening cancer diagnosis. The patients were administered psilocybin for end-of-life anxiety and depression symptoms. The findings have not yet been released.

Hopkins also studied how the drugs, combined with meditation, can enhance psychological well-being and spirituality in healthy people. Those finding also have not been released.

Psilocybin has also been studied as a treatment for obsessive-compulsive disorder at the University of Arizona.

Psychedelics were more widely studied in the 1950s and 1960s, until people began abusing the drugs and their use was stigmatized. The federal government made possession and distribution of the drugs illegal, and scientists and government funders shied away from research.

The drugs were listed in the federal Controlled Substances Act as a Schedule 1 substance, the most dangerous designation. Researchers wanting to use the drugs in experiments had to get extra layers of approval from the Drug Enforcement Agency, which made the process more time-consuming and expensive.

Some researchers in the 1990s became interested in the drugs again and were helped by private funders, such as the Beckley Foundation and the Heffter Research Institute.

Even with the renewed interest in researching the drugs, scientists say it remains difficult to get funding because of the decades-old stigma of psychedelics and their association with American counterculture.

Pharmaceutical companies do not have an interest in developing psychedelic drugs because they can't be patented, and drug makers haven't determined how to make them profitable, said Brad Burge of the Multidisciplinary Association for Psychedelic Studies. The nonprofit promotes the medical use of psychedelic drugs and marijuana.

Researchers say they haven't seen any dangerous side effects. The most recent studies, like the one at Johns Hopkins, are small.

“It is early in the research, so none of us know if this will pan out to be a broadly used treatment, but certainly from where we sit it is promising enough to be rigorously examined and to be taken seriously,” said Albert Garcia-Romeu, a research associate in the department of psychiatry and behavioral sciences at Johns Hopkins, who is working on the smoking studies.

For the drugs to be approved for widespread use, federal or state laws would have to be changed.

McGlothlin was one of 15 people who took part in the smoking cessation study in which patients underwent cognitive behavioral therapy, where they reflected on their attitude toward smoking before receiving doses of psilocybin. They also were given one last cigarette before the session began.

The Hopkins scientists are now building off this research. This time, researchers also are looking at brain imaging to see what happens during a psychedelic high.

Psychedelics are believed to cause people to deeply reflect on their lives and unearth motivation to make changes, said Matthew W. Johnson, an associate professor of psychiatry and behavioral sciences at Johns Hopkins and the study's lead author.

“People tend to experience very personally meaningful experiences under the influence, and it helps reconnect them with important parts of their life,” he said.

Johnson, along with researchers from the University of Alabama, looked at whether prolonged use of psychedelics could help people suffering with depression or who are suicidal.

Critics say that extreme caution should be taken when using illicit drugs to treat illness. Scott Chipman, with the group Citizens Against the Legalization of Marijuana, said more research of psychedelics is needed and that the Food and Drug Administration — not lawmakers — should approve their use.

“If the FDA approves LSD or some other drug for treatment, that means they have done the testing,” Chipman said. “Any medicine should be approved through the FDA process, not through voters, not through legislation.”

Moreover, certain hallucinogens can be addictive, according to the National Institute on Drug Abuse. While LSD isn't considered addictive, users can develop a tolerance so that they take the drug repeatedly at higher doses to achieve the same effect, which can be dangerous.

The researchers looking at psychedelics emphasize that the trials are carefully controlled, as medical professionals remain with patients under the influence of the drug. The researchers also warn that people shouldn't try to self-medicate because some have extreme reactions to psychedelics, including feeling out of control or disconnected from their bodies.

Users of most other illicit drugs generally exhibited an increased likelihood of psychological distress, or feelings of suicide, the federal study found.

The group said they plan to present the results to the FDA in the fall and begin a final clinical trial with 200 to 400 participants.

The group has other studies underway, including using psychedelics to treat social anxiety in adults on the autism spectrum and anxiety associated with life-threatening illness. The researchers also plan to study how MDMA, commonly known as ecstasy or “Molly,” can be used along with psychotherapy for couples that include one person suffering with PTSD.

The researchers said they hope the studies will yield findings that help attract funding for more studies. They pointed to the growing acceptance of medical marijuana as a road map for their efforts. Half of states, including Maryland, and the District of Columbia, have legalized medical marijuana.

“Medical marijuana shows that just because a drug is illegal doesn't mean that it doesn't have great promise, and that all of these compounds deserve careful study,” Burge said.

PREVIOUS ARTICLE
Article 22 of 154
NEXT ARTICLE