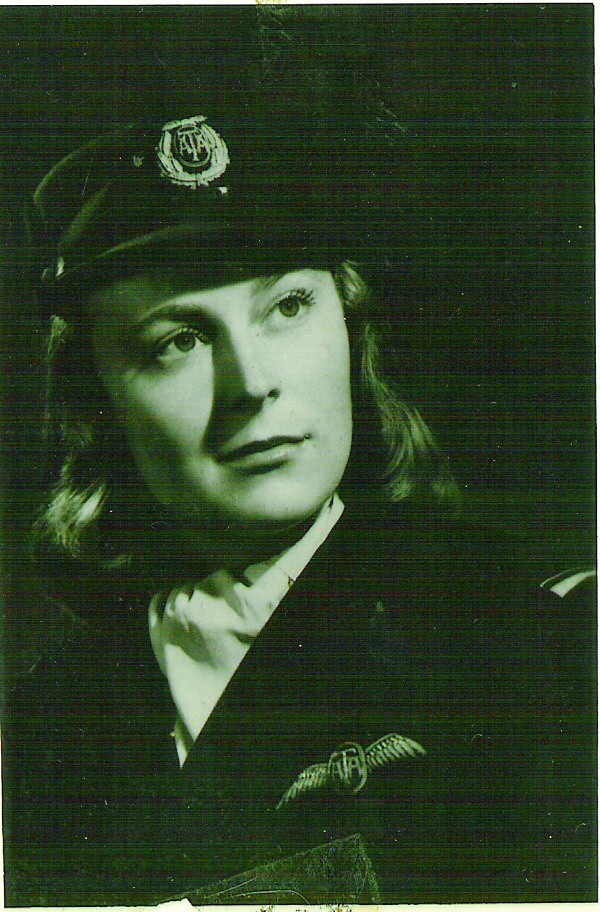 Betty Ann Lussier declined to allow her story to be made into a movie.
PREVIOUS IMAGE

Betty Ann Lussier learned to fly airplanes at a young age and used that knowledge and her inherent moxie to become a pilot during World War II and a counterspy for the Office of Strategic Services.

Her wartime exploits in Europe and North Africa and her postwar life were the stuff of Hollywood movies — yet she dismissed that notion, instead conveying her experiences in articles for The Baltimore Sun and in a book she wrote, “Intrepid Woman: Betty Lussier’s Secret War, 1942-1945.”

Ms. Lussier died Nov. 30 from complications of Alzheimer’s disease at her Rock Hall home. She was 95.

After spending her early years in Alberta, where her parents were ranchers, she moved to the Eastern Shore with her three sisters, Jane, Nita and Suzanne, when their parents purchased Huntingfield, a dairy farm overlooking the Chesapeake Bay near Rock Hall.

“Sometimes [her father] rented a plane and took his daughters for a ride. They took to flying like fish to water,” reported The Evening Sun in a 1943 article. “They’re outdoor girls all right,” their mother said in the article. “They should have been boys.”

When she was 16, and with her father’s guidance, Ms. Lussier learned to fly a friend’s Piper Cub J5.

After graduating from Rock Hall High School, where she was a champion swimmer, Ms. Lussier attended Washington College for a year before enrolling in 1940 at the University of Maryland, College Park, from which she earned a pilot’s license from the Civil Aeronautics Authority, which trained pilots through educational institutions.

She then tried to join the British ferry pilot service but was turned down because of her age. After working briefly at the old Glenn L. Martin Co. in Middle River, she boarded a steamer in 1942 for England as a civilian war worker. She had dual citizenship — Canadian and American.

Once in England, she joined the British Air Transport Auxiliary and wore a blue uniform with a gold shoulder braid that read “U.S.A.” She picked up the nickname “Bay” which was phonetically derived from her first two initials.

“She is the first Maryland girl to win her wings in England as a ferry pilot for the British Air Transport Auxiliary,” reported the Evening Sun.

During the war, Ms. Lussier wrote a series of articles for The Sun. In a 1943 installment, she described a flight delivering an airplane across the English countryside on a rainy morning that eventually cleared. She took in the verdant landscape, ancient castles and watched farmers working in their fields before completing her flight.

“I glanced once more at the quiet green countryside, the calm, blue sky, the monotonous rolling waves and throttled back to land in the midst of the bustling activity of war,” she wrote.

In 1943, she experienced a personal tragedy when her fiancee, Lt. Charles Thomas Chittum, a P-47 pilot from Catonsville, was killed in an automobile accident in Hempstead, L.I., before he was due to fly to England and go into action.

After the Normandy invasion, female pilots were not allowed to deliver planes to combat areas, so Ms. Lussier and her sister, Nita, left and joined the U.S. Office of Strategic Services, a forerunner of the CIA, where she was a counterespionage agent assigned to the elite X-2 Division. Her assignment was analyzing German messages intercepted by Ultra — the name adopted by British military intelligence — and delivering them to combat headquarters.

Other assignments in Algeria, Italy, Sicily and France included helping establish a network of double agents whose mission was to transmit misinformation to the enemy.

When she was barred from joining her OSS unit on the French front, she located an Army Air Corps pilot “who was susceptible to mild flirtation,” she told The Sun in 1998, and convinced him that she was a radio technician needed at the front. He complied with her wishes.

In a 1945 article for The Sun after the war ended, she wrote about leaving war-torn Europe and going home.

“You try and remember the feel of the steering wheel of your little coupe; the smoothness of the dual highway down to Annapolis,” she wrote. “It works for a few minutes, but then the beaches of Anzio come crowding into your mind. And your eyes are filled with the pictures of those quiet, torn bodies.

“So many of your friends never got any farther than those beaches,” she wrote. “You wonder uneasily if the elation you feel about finally going home is disloyalty to those brothers. Then you remember how you all used to talk and how they’d say, ‘If you get back and I don’t ...’”

She fell in love with Ricardo Sicre, a Spaniard who had served with her in the OSS in France. They married in 1945 and settled in Madrid, where they raised their three sons and where Ms. Lussier continued working as a special correspondent for The Sun.

Her husband worked for the World Commerce Corp. and later founded a successful import-export business.

They were glittering members of the social constellation of Madrid. They entertained on their yacht, the Rampager, and counted among their friends Ernest Hemingway, Ava Gardner, Grace Kelly, Prince Rainier, Adlai Stevenson and Spanish intellectuals and bullfighters.

When she learned that her husband had been attending bullfights escorted by Ava Gardner, Ms. Lussier left without him and moved to Morocco.

There, she introduced a hybrid corn. In a book she wrote, “Amid My Alien Corn,” published in 1957, she recounted how she “purchased a tractor, ten tons of seeds — then, later, 1,000 acres of farmland 80 miles from Tangier — and made the whole preposterous idea work.” She recounted her experiences in another book, “One Woman’s Farm.”

She was an outspoken champion of workers’ rights, which eventually got her expelled from the country. She later returned to Spain and, during the 1960s, set up schools and family health clinics in the slums of Madrid.

Ms. Lussier finished her bachelor’s degree from the University of Maryland while in Europe, and when her sons returned to the U.S. for college, she obtained a master’s degree in social work from Columbia University.

She and her husband later moved to Switzerland and Manhattan. They divorced in 1975.

Ms. Lussier became a social worker in New York City and later did similar work in Africa for the United Nations and in international aid in Senegal and Morocco.

After retiring, she lived in Staten Island, N.Y., and Pacific Palisades, Calif., before moving to Rock Hall in 2015, the year she completed “Intrepid Woman,” published by the Naval Institute Press.

Ms. Lussier’s life was also chronicled in “Sisterhood of Spies: The Woman of the OSS,” written by Elizabeth P. McIntosh and published in 1998.

In a 2008 ceremony, British Prime Minister Gordon Brown presented medals to the surviving members of the Air Transport Auxiliary — who together delivered nearly 310,000 aircraft during the war.

“They paid us the same as men and advanced and promoted us just as if we were real citizens,” Ms. Lussier told the Palisadian Post at the time. “It was the first time I saw equality with men, and that really amazed me.”

Hollywood approached Ms. Lussier about making a film based on her life. She demurred. “I’ve always said no,” she told the Palisadian Post. “When you do something that gets a lot of publicity, your privacy is destroyed.”

Plans for memorial services are incomplete.

PREVIOUS ARTICLE
Article 25 of 158
NEXT ARTICLE