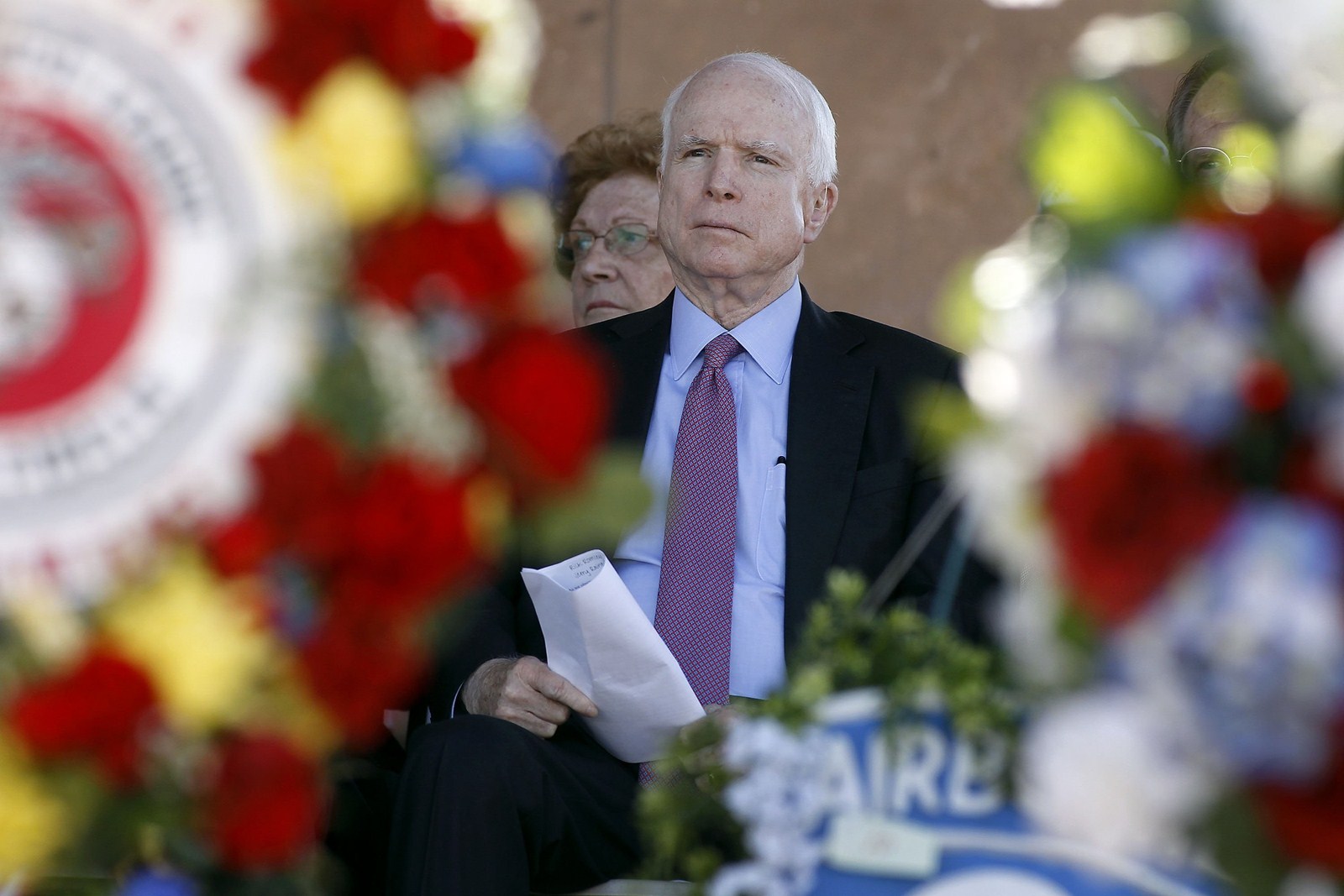 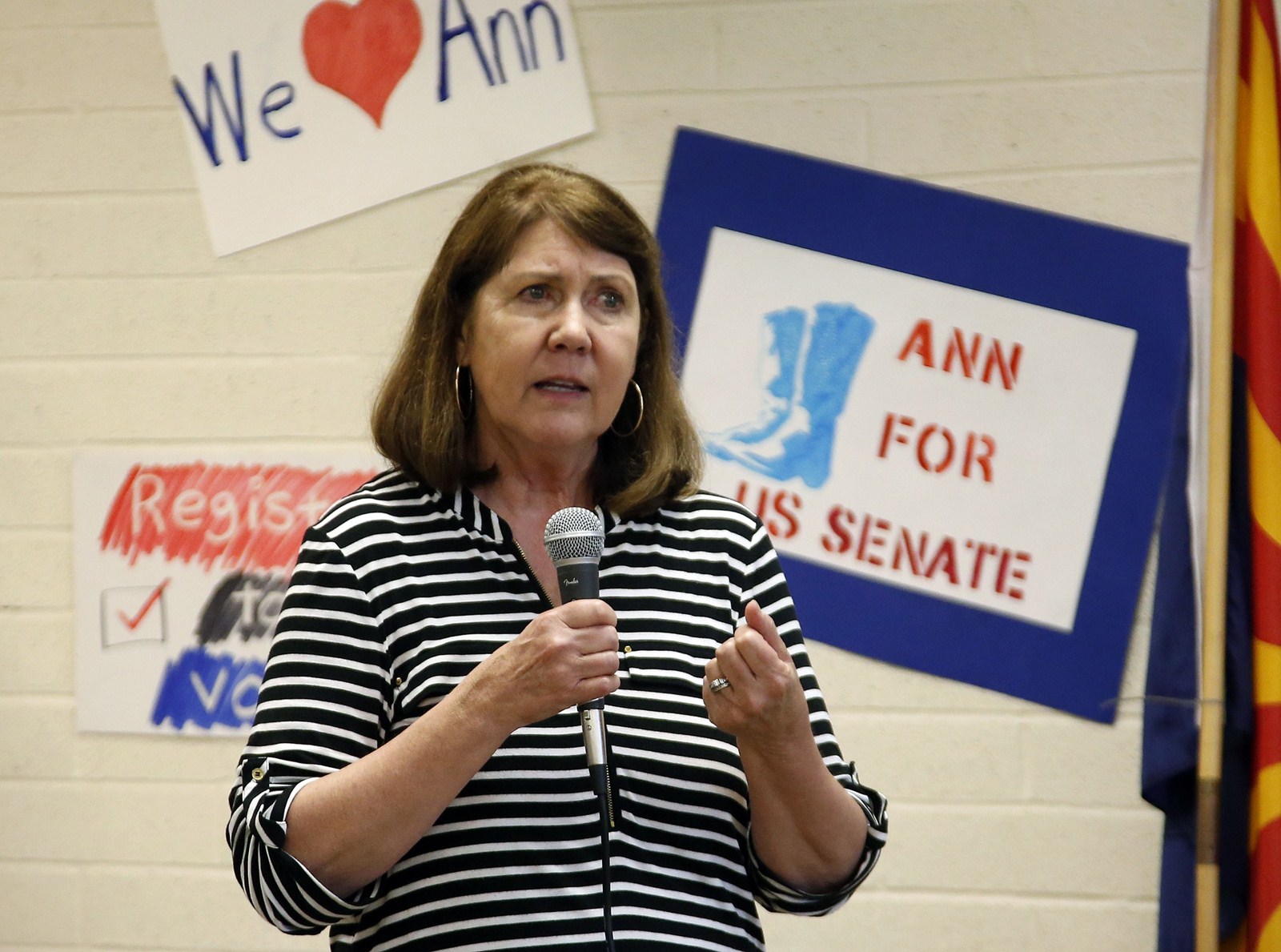 — John McCain came to talk about honor and duty. The setting was an American Legion post, where Arizona's senior senator unfurled an army's worth of endorsements from military brass supporting his November re-election bid.

But all reporters cared about was Donald Trump. What did McCain think of his latest campaign shake-up? “Do you have a question about veterans?” McCain demanded.

What did he think about veterans denouncing Trump? About Trump insulting the family of a soldier killed in Iraq? McCain responded through gritted teeth. “I'm running my campaign for the United States Senate,” he said. Anything to do with the Republican presidential nominee, he insisted, had nothing to do with his race.

But it's hardly that simple.

Just shy of his 80th birthday, seeking his sixth Senate term, McCain is waging the most difficult and unhappy re-election fight of his career.

The main reason is Trump — a man he loathes — who mocked McCain's capture as a prisoner of war in Vietnam but whom the senator dare not publicly renounce, stuck as he is between his Democratic opponent and a Republican primary foe who strongly embraces the businessman.

Democrat Ann Kirkpatrick has seized on McCain's grudging support for Trump to suggest the senator is no longer the country-first maverick Arizona voters dispatched to Washington in repeated landslides.

“People can't believe he didn't stand up for himself when Donald Trump insulted him,” said the three-term congresswoman from northern Arizona, whose campaign against McCain affects a tone more of sorrow than anger. “His actions show that he's not the principled leader he used to be.”

“He expected everybody to come out full force for him when he was the [Republican presidential] nominee in 2008 … and he's not willing to do that for Donald Trump,” said Ward, who is challenging McCain for the GOP Senate nomination.

McCain is considered a heavy favorite in Tuesday's primary, though an upset is not out of the question.

After years of flouting party orthodoxy on issues such campaign finance, climate change and immigration, his relationship with much of Arizona's Republican base is one of mutual contempt; any opponent is almost certain to get at least 30 percent support.

Ward, a 47-year-old emergency room physician and former state lawmaker from Lake Havasu City, is an unabashed acolyte of Trump, who barely missed sweeping all 15 counties in Arizona's presidential primary.

She targets illegal immigration — “I am ready to mix the mortar to fix the border.” She sounds the same populist notes as Trump — “Everybody deserves a friend in Washington, not just the rich, not just the powerful.” She even employs some of the same inflammatory rhetoric.

Speaking to Republican precinct captains in Mesa, outside Phoenix, she accused McCain of turning his staff and young volunteers “into basically campaign terrorists” who have harassed and intimidated her supporters, almost knocking her mother down at one stop.

McCain and his allies have countered by portraying Ward as an unhinged conspiracy monger and political lightweight.

Kirkpatrick, a veteran of several tough House races, is the most credible Democratic opponent McCain has ever faced.

Her call for new blood in the Senate might be more resonant from a candidate who wasn't already 66 years old. But her Arizona pedigree is impeccable and her relative moderation makes it harder to portray Kirkpatrick, as the handmaiden of Left Coast liberals.

Born and raised on the White Mountain Indian reservation, where her father owned a general store, Kirkpatrick grew up speaking Apache and is fluent in Navajo. A lawyer, who worked for a time prosecuting drug cases, she represents a district that sprawls from the northern tip of Arizona to the Tucson suburbs hundreds of miles south; the area is larger than the state of Pennsylvania, making Kirkpatrick at least fleetingly familiar to voters throughout the state.

But it is Trump who gives Kirkpatrick her best shot in November.

His insulting comments are expected to spur Democratic turnout among the state's large and growing Latino population; so, too, is the campaign to unseat Maricopa County Sheriff Joe Arpaio, who faces possible criminal charges for his racially tinged approach to law enforcement.

The greater danger to McCain, though, is a defection of white voters, who still make up the vast majority of the electorate, or a depressed Republican turnout owing to the presence of Trump atop the GOP ticket.

McCain, first elected to Congress as a House member in 1982, is counting on his longevity and brand-name familiarity — those very things, paradoxically, that his opponents target — to distinguish himself from Trump. He has also spoken out against his party's nominee, selectively.

“I cannot say how deeply I disagree” with trump, McCain said then.

Obviously, there was no pleasing both sides. But the separation from Trump is an approach, strategists suggested, the senator will pursue with increased frequency — though not quite yet.

Asked about Khan during his stop at the American Legion hall, McCain declined to elaborate.

“I don't have anything more to tell you,” he growled at a reporter. “I've answered all the questions I want to answer.”

PREVIOUS ARTICLE
Article 29 of 71
NEXT ARTICLE