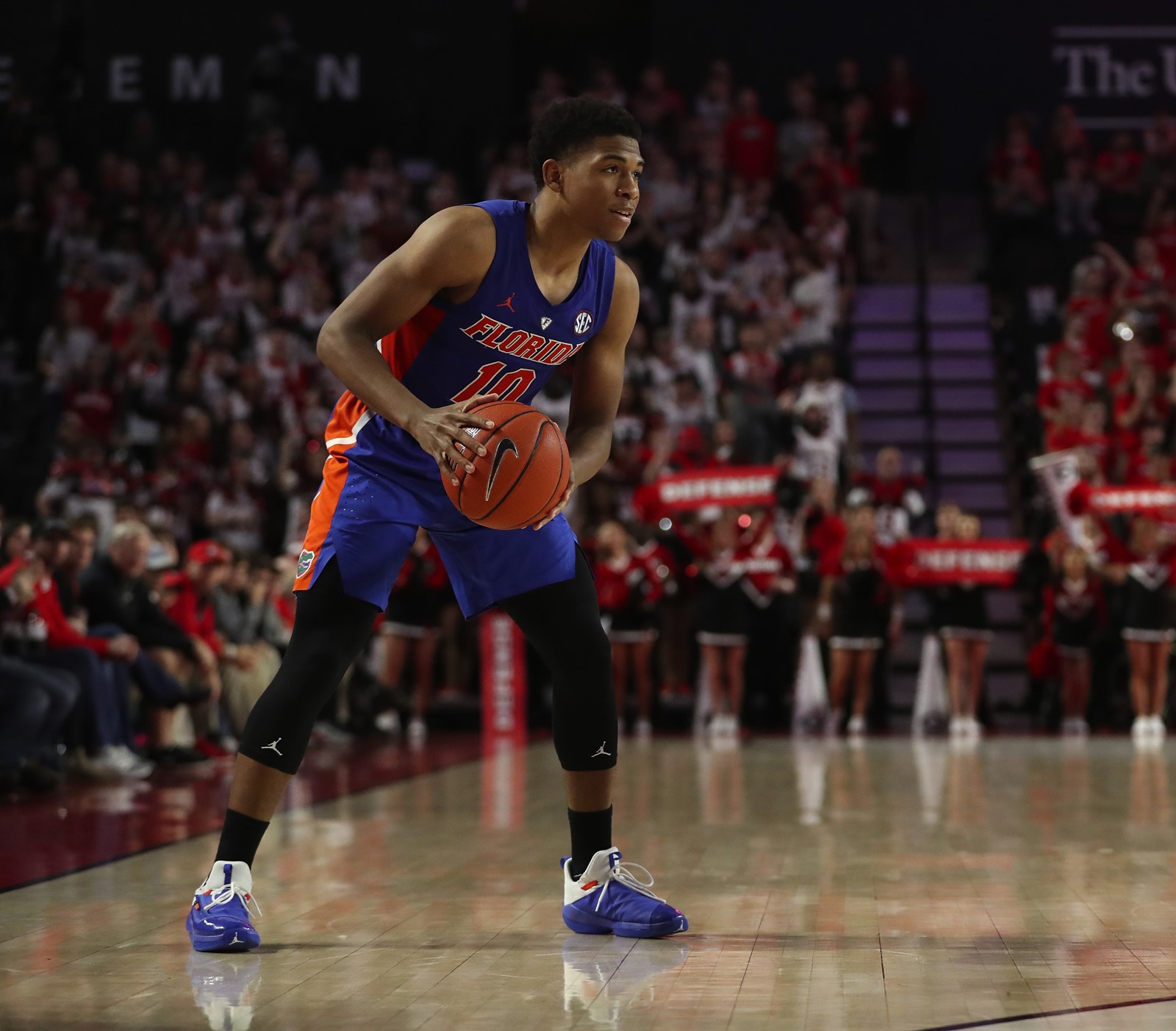 Freshman Noah Locke has started 24 games for Florida, leads the team with 72 made 3-pointers and ranks second on the team in scoring (10.5 points per game). (Tim Casey/UAA Communications )
PREVIOUS IMAGE

Noah Locke’s earliest basketball memory involves sinking the winning free throws in a recreation league game inside an East Baltimore gym at the age of 7. For a first-grader, that was akin to winning a championship before a packed house at Madison Square Garden.

“It felt so big to me because I was so little,” he recalled, noting that the rims were lowered to accommodate the young players. “It was the smallest gym, and there were probably 20 people in there, but it felt so big to me. Everybody was in there screaming, and it was just a big memory for me. People probably don’t remember it, but I definitely do.”

Now 19, Locke, a Baltimore resident and McDonogh graduate, has springboarded off that memory to make a plethora of new ones. The 6-foot-3, 205-pound freshman guard for the Florida men’s basketball team (17-11, 9-6 Southeastern Conference) has thrust himself into the starting lineup, taking the floor for the opening tipoff in the past 24 games and ranking third in playing time at 26.5 minutes per game.

Locke leads the Gators in 3-pointers made (72) and ranks second in 3-point field-goal percentage (.393), scoring (10.5 points per game) and total field goals made (97). He needs only two more 3-pointers in the team’s last three regular-season games to pass Anthony Roberson as the school’s most prolific marksman in freshman history.

Coach Mike White said that he didn’t anticipate that Locke would move into the starting lineup when he studied the team during summer workouts.

“But he’s earned it,” he said. “He’s come in here, fought for minutes, and he’s really taken that starting position. He’s been a very consistent, mature, tough kid. He’s even leading a bit as a freshman. He’s been a very solid defender for us, and obviously, he’s got an ability to make shots at a high level.”

Locke’s success in basketball isn’t shocking considering his family’s roots in the sport. Father Kyle Locke was a standout 3-point shooter at Coppin State, where he ended his career ranked 10th in program history in 3-pointers with 122 and won four Mid-Eastern Athletic Conference regular-season titles from 1992 to 1996.

Mother Vanessa (Marion) Locke also played four years for the Eagles and helped the 1990-91 squad capture the MEAC championship. Older brother Kayel starred at McDonogh and North Carolina-Greensboro and is playing professionally in the Netherlands, and sister Paris is generating buzz that she could be even better than her brothers.

Locke said his family’s legacy in basketball has been more of compliment than a curse. Six years after Kayel set the all-time scoring record at McDonogh with 1,938 points, Noah passed his brother with 2,350 points last winter.

“I just want to do better,” he said, adding that he still talks to his brother every day despite the six-hour time difference. “When I went to McDonogh, I wanted to break my brother’s record. I wanted to be able to be a great player and be recognized as one of those guys. It’s just something that drives me every day. My brother is playing overseas, and that makes me go even harder every day to be able to get to the NBA or get to playing professionally. Even my dad stays on top of me every day. Even when I think I’ve had a good game, there’s always something that I can fix, and my dad always tells me.”

McDonogh coach T.J. Jordan credited the family with helping Noah Locke expand his game. Jordan said Locke evolved from being a set shooter who needed someone else to create as a freshman into a multi-tool player as comfortable above the rim as he was behind the 3-point arc as a senior with the Eagles.

“When he was able to do that, [opponents] had to start defending him in a different way,” Jordan said. “They weren’t necessarily trying to force him to put the ball on the floor. They had to stay honest on the defensive end, but he was able to use his athleticism and quickness to get past them.”

Locke, who chose Florida over Michigan, Ohio State, Providence and Xavier, has been battling a groin injury that has been alternately painful and quiet. It is an ailment that he prefers not to discuss, but he conceded that it has impacted his ability to move laterally and get maximum lift on his jump shots.

Locke said he has been limited in some practices, but dismissed the notion of sitting out a game or several.

“I’ve been fighting through it for probably about seven weeks now,” he said. “There’s going to be some stuff done after the season, but it’s something I can play through right now. So I’ve just been getting treatment as much as I can. Some days are worse than other days, but some days, it feels like nothing hurts.”

Locke’s determination fits what teammates such as freshman point guard Andrew Nembhard have learned about him.

“I’m not really surprised because of the person that Noah is,” said Nembhard, Locke’s roommate. “He’s the type of person that’s going to fight through adversity, and he’s been doing that ever since he found out about his injury.”

For now, Locke said he hopes to provide a spark for the Gators on offense and defense.

“They usually put me on one of the best players on the [opposing] team,” he said. “They like my mentality of being a dog and being the guy that’s really aggressive on defense, and that’s why I try to do. I try to bring that fire. That’s what they want me to do here, and I think that’s one of the reasons why I’m getting the playing time that I get.”

Locke’s imprint on Florida will be developed over the next three-plus seasons, but White said he envisions Locke wearing the captain’s “C” on his jersey for multiple years.

“He’s a guy that you enjoy being on his team, and I’m sure his teammates feel the same way,” White said. “He’s accountable. He’s serious about winning and about being a good player. So we’re very fortunate that he decided to come south and be a Gator.”

PREVIOUS ARTICLE
Article 32 of 84
NEXT ARTICLE