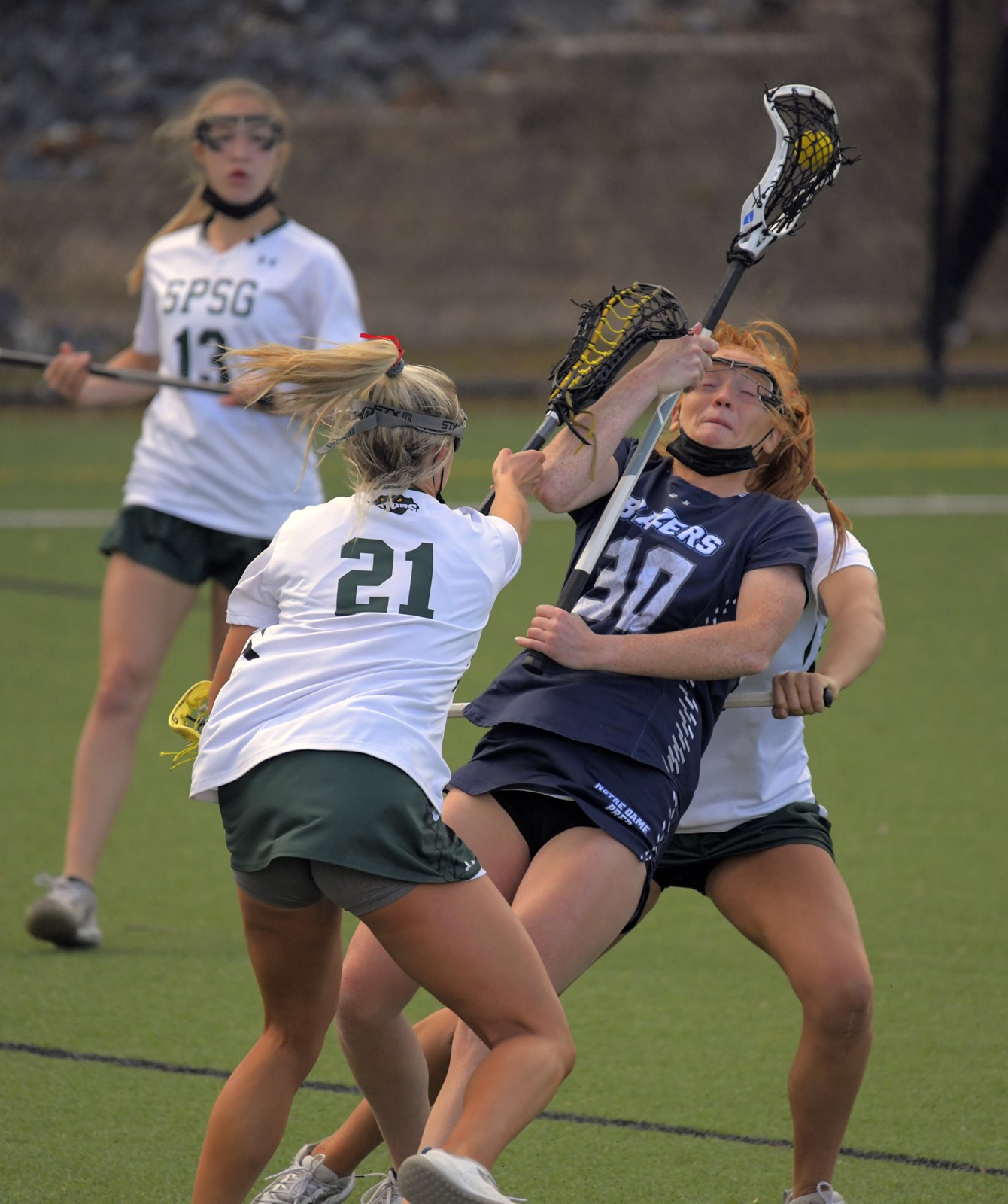 By Rich Scherr For Baltimore Sun

Notre Dame Prep senior Nancy Halleron knew the Blazers were capable of bigger things than they showed in Wednesday’s lackluster loss to McDonogh. They showed just how big in the first half of Friday’s Interscholastic Athletic Association of Maryland A Conference showdown at St. Paul’s School for Girls.

Halleron, an attacker headed for Vanderbilt, scored twice early, helping her team torch the Gators — the nation’s No. 3 team in the Nike/US Lacrosse High School Girls Top 25 — for the game’s first seven goals. Then, after St. Paul’s clawed back to pull even late, the Blazers won it when senior Caroline Collimore streaked down the middle and scored with 1:37 left in a 10-9 win.

“We were really upset about the loss to McDonogh, and so excited to get back onto the field,” Halleron said, referring to Wednesday’s 9-6 loss, the team’s lone setback. “I think we really worked on both sides of the field. I think it was [about] getting possession. Draw controls were big in this game.”

Halleron played a key role, winning several big draw controls, particularly in the final minutes, after St. Paul’s had embarked on a 8-1 rally to tie, and seemed certain to take control.

“We knew it was going to be a battle, but I’m proud of my girls,” NDP coach Mac Ford said. “I think we knew we were a little bit better than what we showed Wednesday [against McDonogh]. We came out with a lot of emotion in the first half. The intensity was right where we wanted it.”

Notre Dame Prep (9-1 overall, 9-1 A Conference), the nation’s No. 13 team, grabbed the upper hand in the race for the top seed in the conference tour

nament, tied in the loss column with St. Paul’s (11-1, 11-1) with two games to play. The Blazers will be aiming for their first championship since ending McDonogh’s national-record 198-game winning streak in 2018.

The final is scheduled for May 15 at US Lacrosse headquarters in Sparks, where defending champion McDonogh could be vying to win its 11th title in the past 12 tournaments.

On this day, however, it was Notre Dame Prep’s time to shine.

Led by two goals each by Halleron, junior Emily Peek and senior Haley Burns, the Blazers dominated play in the early minutes, forcing turnover after turnover and converting at the offensive end. When Burns scored her second goal on a solo effort with 7:52 left in the half, they had built their lead to 7-0.

“We certainly didn’t show up in the first 20 minutes of the game,” Gators coach Mary Gagnon said, “and then we were fine. We don’t take any team lightly, because they’re all great teams [in the A Conference]. But that’s on us, and we have to learn from it and go forward.”

But St. Paul’s soon began to build momentum by fighting to win loose balls and creating turnovers. Caitlyn McElwee scored three goals and Kendall Steer and Lauren Steer two each, as the Gators eventually pulled even at 8-8.

Minutes later, tied at 9, St. Paul’s appeared to pull ahead before McElwee’s apparent goal was waved off because of a foul. Notre Dame Prep then took advantage of the opportunity, taking the lead for good on a designed play for Collimore.

Ford said he had spent time at Thursday’s practice trying to get the senior and her twin sister, Ella, both bound for the University of Denver, more involved in the offense.

“[Thursday in practice] we worked a lot on getting her and her sister back in the scoring column, so it was a big goal for her,” Ford said. “We set it up, we had a nice play for her. She’s so fast, and she just took it to the cage.”

“We had a play running where I was supposed to get it and dodge and go, but I couldn’t have done it without my teammates cutting through and everyone’s work to get it around,” Collimore said. “It’s a great feeling.”

PREVIOUS ARTICLE
Article 37 of 127
NEXT ARTICLE