Lavin is shaping future from the shadows 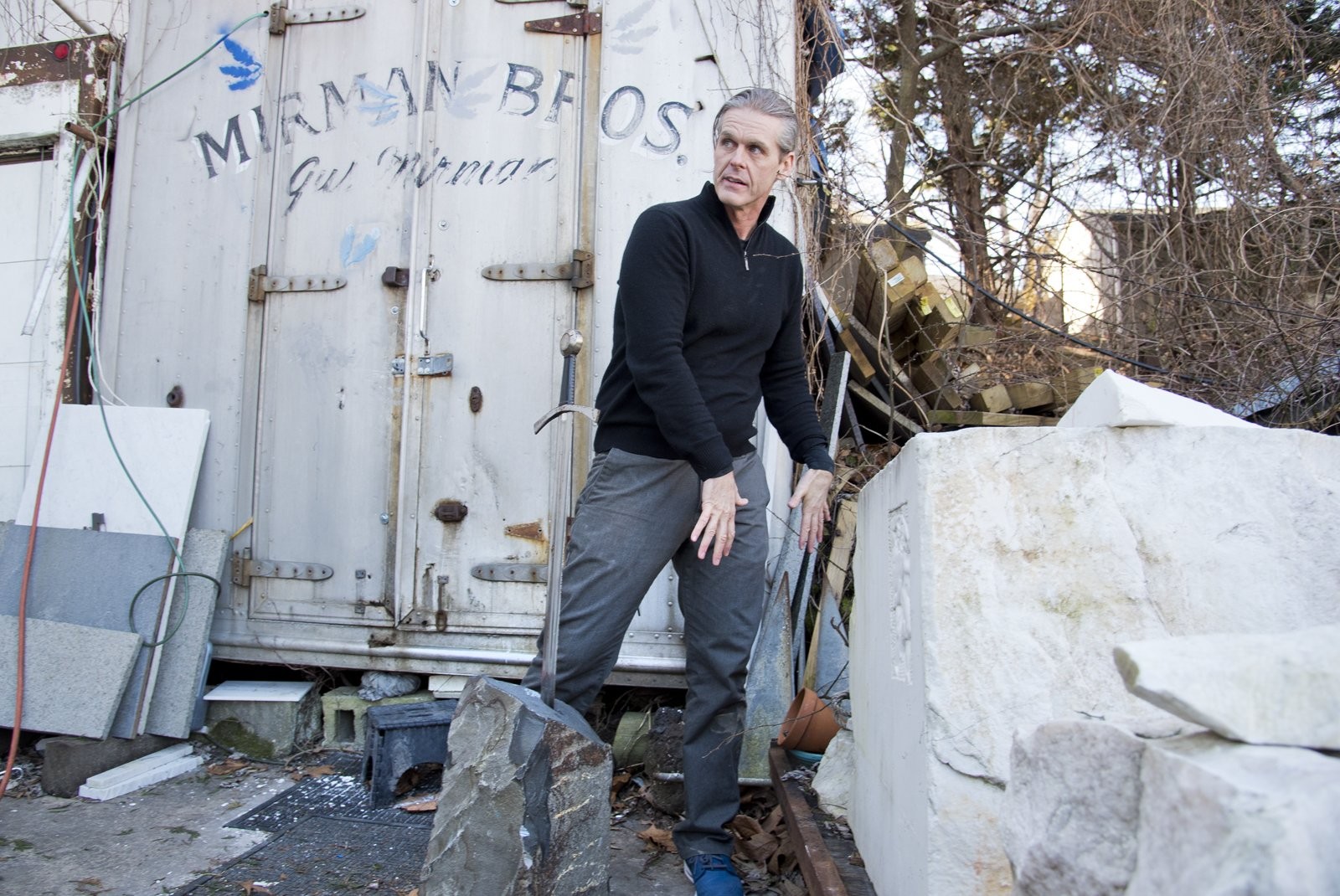 The Cypress Creek Marina is what you’d expect — boats, boat parts and aquatic construction. But even with engines, ropes and miscellaneous parts, its warehouse in Severna Park feels like the Vatican.

Eddie Lavin, 42, has been creating sculptures for the last two years out of a truck container at the marina. He’s been too shy to show his work, but recent heavy rains caused the container to rupture and he had to move the sculptures to the warehouse where they were housed Thursday.

“That scared me to death. I’m uninsured. I have no protection. This represents two years of my life,” he said.

His work needs to be cleared out of the warehouse by Monday, and he has no idea where it will go. Until then, it sits among boat parts.

Paul Spadaro, president of the Magothy River Association, looks at the Italian marble, basalt and granite Lavin has been chiseling and sawing away at for years.

“When you see the rock outside and see what he created with a chisel and hammer … He’s the real deal,” Spadaro said.

Spadaro had originally set Lavin up with the truck container to act as his studio. And Spadaro got Lavin’s work into the boat shop temporarily until Lavin can find a new home for it. Lavin is still working to get the water stains out of his work from the flood.

The largest of Lavin’s four pieces is a 5-foot sculpture of St. Michael the Archangel. His angular face and flowing hair are flawlessly carved from Italian marble, sitting atop a spinning granite column that has the deep curves of the caduceus — a Greek symbol most associate now with medicine — carved through it.

In a flat slab of marble behind Michael’s head, two of the archangels mirror each other with arms grasped, a similar pose as God and Adam take in Michelangelo’s “The Creation of Adam.” Like the seahorses, the figures are reminiscent of the hippocampus.

Above the angels, a pine cone shaped marble pineal gland sits between a pair of wings crafted from Da Vinci’s designs.

Together, the pieces are meant to represent the right and left parts of the brain and ourselves: man in the spiritual and material form. They are the imaginative self and physical self, which bring enlightenment when combined. They are Lavin’s connection with an angelic presence.

“I pulled that out of this stone and I put my heart into it,” Lavin said. “We all have something working through us to guide us. It has been my honor to attempt to pay respect to that.”

Lavin never knew he had the potential of such a high-caliber artist, let alone the ability to create art at all. He built a career as a high-ranking member of a telecom company in San Diego where he said he made $113,000 a year. When the recession hit, he lost his business and himself.

“I had somewhat of a breakdown, if you will,” he said.

Lavin sought treatment at the Caron Foundation in Pennsylvania where he took the art class that unlocked his talent. His first assignment was to sketch the person next to him. Lavin’s drawing was so beautiful, the teacher and subject both demanded copies.

Lavin went back to school and threw himself into his work, but had to move back to Maryland seven years ago to take care of his ill mother. That’s when he met Mike Maguire and ended up at the marina.

Maguire, 37, hides in the back of the shop as Lavin explains his work. When his name is mentioned, Maguire bursts into tears and embraces Lavin.

Lavin’s modesty has kept him from any kind of contact with the local art community. He has no connections and therefore knows no one who can help him.

“I’ve never sent an email. I only posted on Facebook about three days ago,” he said. “It’s very hard for me to take responsibility for everything you see here.”

Maguire is determined to get Lavin’s work on display. He’s been acting as Lavin’s alter-ego, giving himself the art name “The Genesis” to post on Facebook and call art galleries demanding space for his work. “The Genesis” is what he’s dubbed Lavin’s work, but Maguire has become the character.

“I don’t know where Genesis ends and I begin,” Maguire laughed.

So far, the only viable option for Lavin’s work is a friend’s garage, but this experience has made him realize he’s ready for his work to be seen by the public.

“It’s cramped up right now and it’s not in the common light,” he said. “They have to stay together.”

PREVIOUS ARTICLE
Article 82 of 148
NEXT ARTICLE