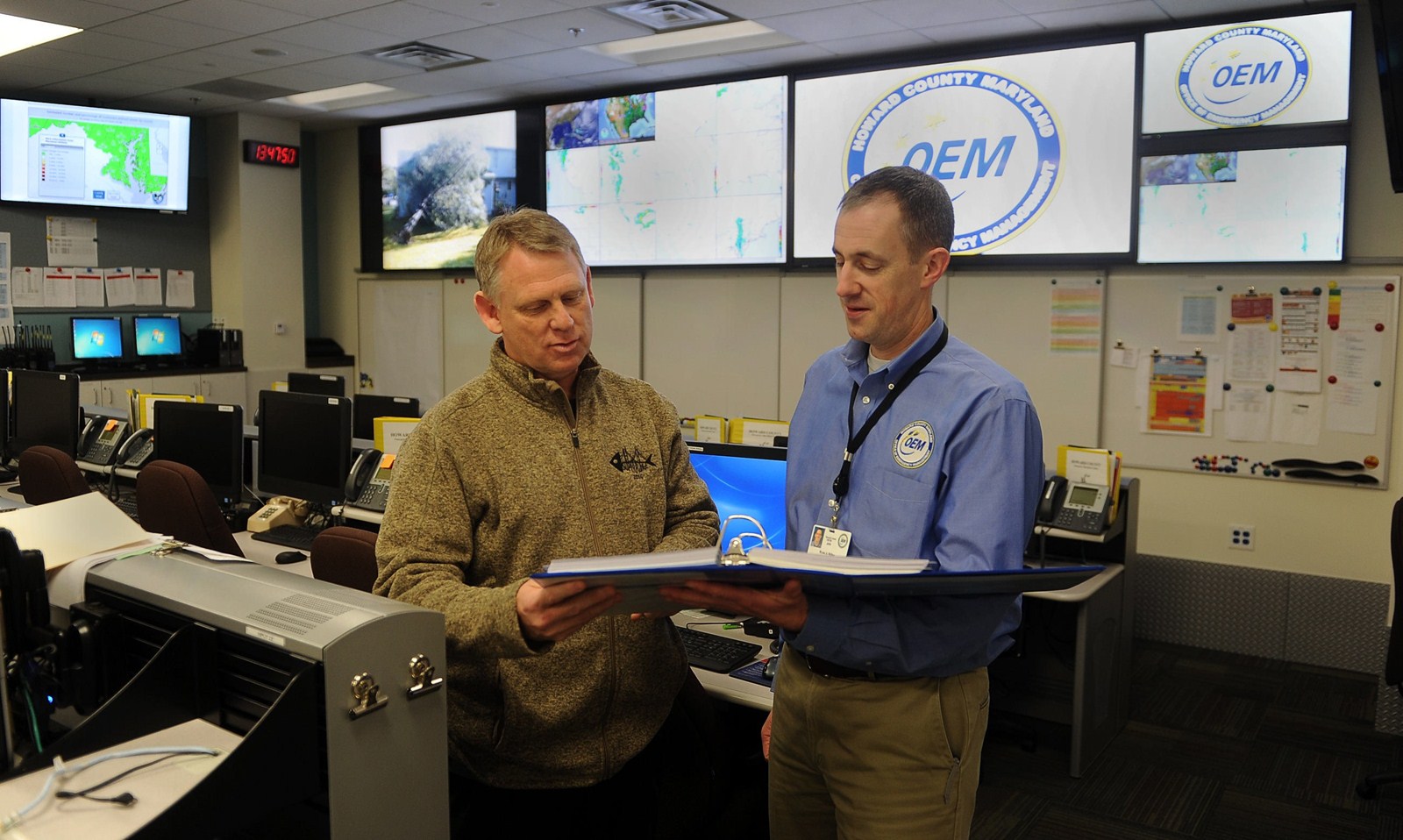 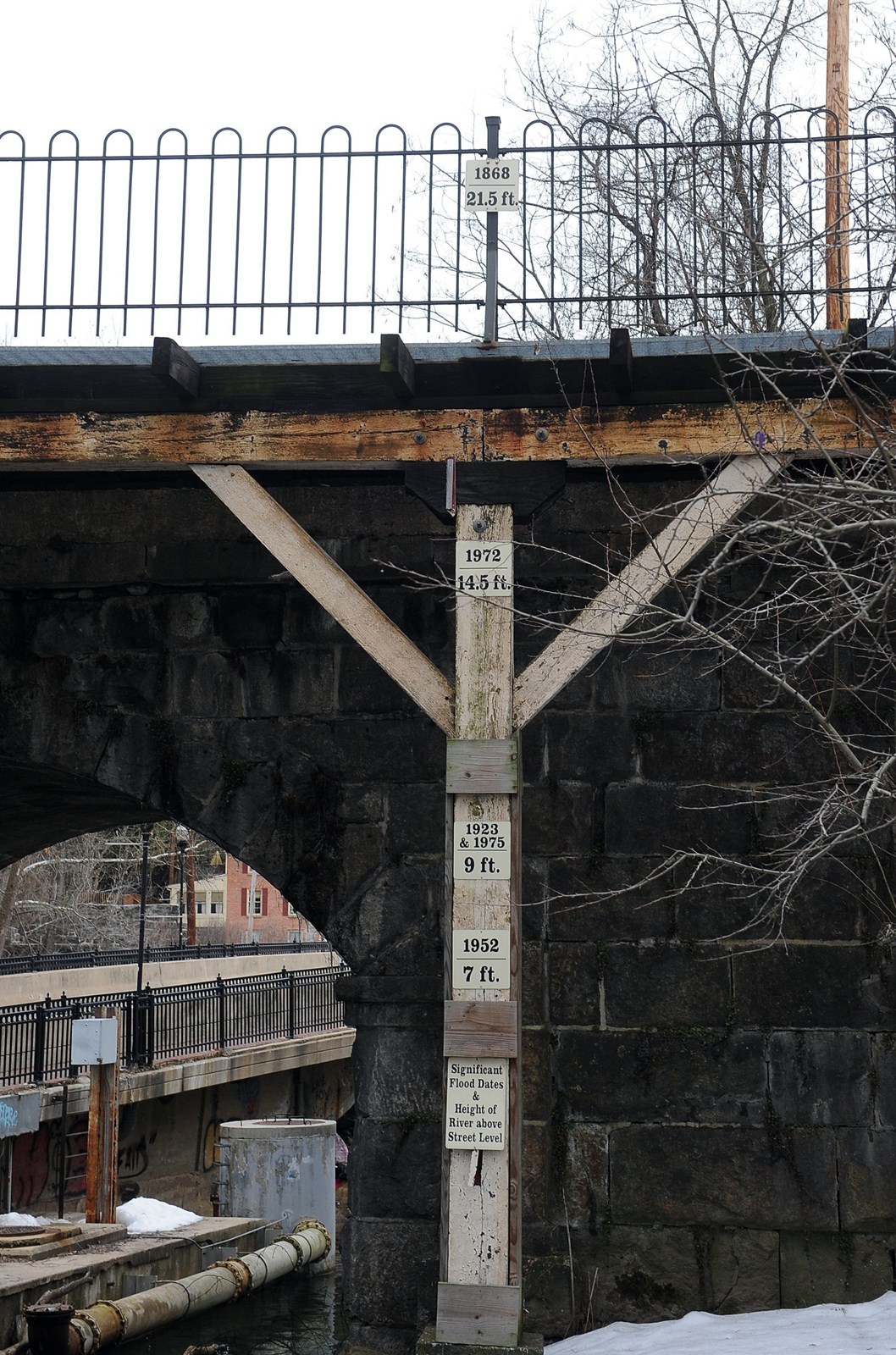 A beam under the railroad tracks at the foot of Main Street in Ellicott City marks the level of Patapsco River floodwaters during major storms over the years. ( ? )
PREVIOUS IMAGE

Feb. 15 stands out as a day that typifies how quickly Howard County can leap from one type of treacherous weather to another.

The county went from winter storm warning to flood watch on Presidents Day without pausing as the weather changed from light snow to sleet to freezing rain and then to heavy rain, all in the course of about 12 hours.

“That's the nature of weather in Howard County,” said Ryan Miller, director of the county's Office of Emergency Management, which provides weather alerts via social media. “This is the perfect environment for some of the weirdest weather you'll ever see.”

But county officials say there is a way for residents to feel less helpless when a storm is approaching, especially when conditions are ripe for severe flooding, a major concern.

Through a partnership with the National Weather Service, the county is offering classes taught by meteorologists to train volunteers to record and report severe weather to forecasters, saving lives and property in the process.

Called SKYWARN, the program of the National Oceanic and Atmospheric Administration has trained nearly 300,000 people across the country to be weather spotters. A basic class is scheduled Tuesday at the George Howard Building in Ellicott City, followed two weeks later by a class on flooding.

One of the main goals of the free sessions is to train spotters to report observations — known to forecasters as ground truth — that can aid in the county's emergency response in Ellicott City, which has been hit repeatedly by flooding over the centuries.

Cleanup along Main Street and in the historic district after Tropical Storm Lee in September 2011, which dumped 10 inches of rain, cost the county $1.65 million, County Executive Allan H. Kittleman said, and more than $500,000 in private property damage was reported.

“Historic Ellicott City has far too much history with flooding. These classes provide a good opportunity to have more discussion about that and to become better educated,” said Kittleman, who issued an executive order in May to form the Historic Ellicott City Flood Advisory Group, which is tasked with acting on initiatives to reduce flooding.

He allocated $2.5 million for the first phase of flood-mitigation projects there.

Building an army of weather spotters is one of those instances where more is better, Miller said.

“The more weather spotters we can imbed in the community, the more accurate our response to weather events will be,” he said. “When a trained spotter calls the National Weather Service to report what they're seeing, weather forecasters have a key piece of information that they wouldn't have had otherwise.”

There are 279 registered SKYWARN spotters in Howard County, according to Chris Strong, warning coordination meteorologist with the National Weather Service's Baltimore-Washington office in Sterling, Va. Howard has more than 250 square miles to account for.

“Nothing is going to beat having eyes on the ground to corroborate what our technology is telling us,” Strong said.

“Being able to put details into our forecast, such as downed trees or structural damage, helps personalize the threat and leads to better and more advanced warnings that help get people to safety.”

More than 100 people have registered for Tuesday's class on the basics of spotting and reporting severe weather. The flooding class, which is scheduled for March 15 and requires participants to have taken the basic class, has never been held before in Howard.

Thirty people have registered for the session, which will be taught by a hydrologist.

The classes are not to be confused with training in weather chasing, he said, noting that spotters are not encouraged to take risks during severe weather to collect data.

“There certainly are limitations on weather spotters ... but their observations can be really impactful on Historic Ellicott City in particular,” Kittleman said.

While classes are open to all, Miller says that 75 percent of the participants in county-sponsored sessions live in Howard.

“People here are really interested in learning about severe weather, and they turn out in droves,” he said.

Realizing that conventional methods of assessing risk were not accurate enough to keep residents safe in a place where conditions can change rapidly, county officials decided in 2011 that it was time to earn the National Weather Service's StormReady designation.

“We were the hole in the doughnut in the region; we didn't have a strong relationship with the weather service,” Miller said. “We decided we wanted to fill that gap.”

Educational outreach is a key part of qualifying for the designation, which is recertified every four years. StormReady demonstrates that the jurisdiction has trained 911 operators to respond to severe weather and has put in place response procedures in the event of natural emergencies such as tornadoes and flooding, among other criteria.

“Classes introduce the community to methods of accessing information in the right way, at the right time,” Miller said.

The basic class will train participants to recognize features associated with developing, mature and dissipating thunderstorms, which can bring hazards that include lightning, flooding, hail, tornadoes and downbursts. Attendees will also learn basics about winter weather and tropical storms.

The flooding course will provide in-depth training on flood hazards and the role of spotters.

“Seeing them literally shoveling out their lifelong memories was just heartbreaking,” she said. “Every Howard County citizen has to be motivated to get involved. Ellicott City has so much to offer as our county seat, as a historic thoroughfare and as a place for recreation.”

Kittleman said citizens have an opportunity through spotter training to contribute something of real value to their communities.

“The biggest takeaway for why we're doing this is that reporting severe weather observations is similar to the policy on fighting terrorism: If you see something, say something,” he said.

PREVIOUS ARTICLE
Article 95 of 158
NEXT ARTICLE