Centrowitz heads to Rio with a medal on his mind 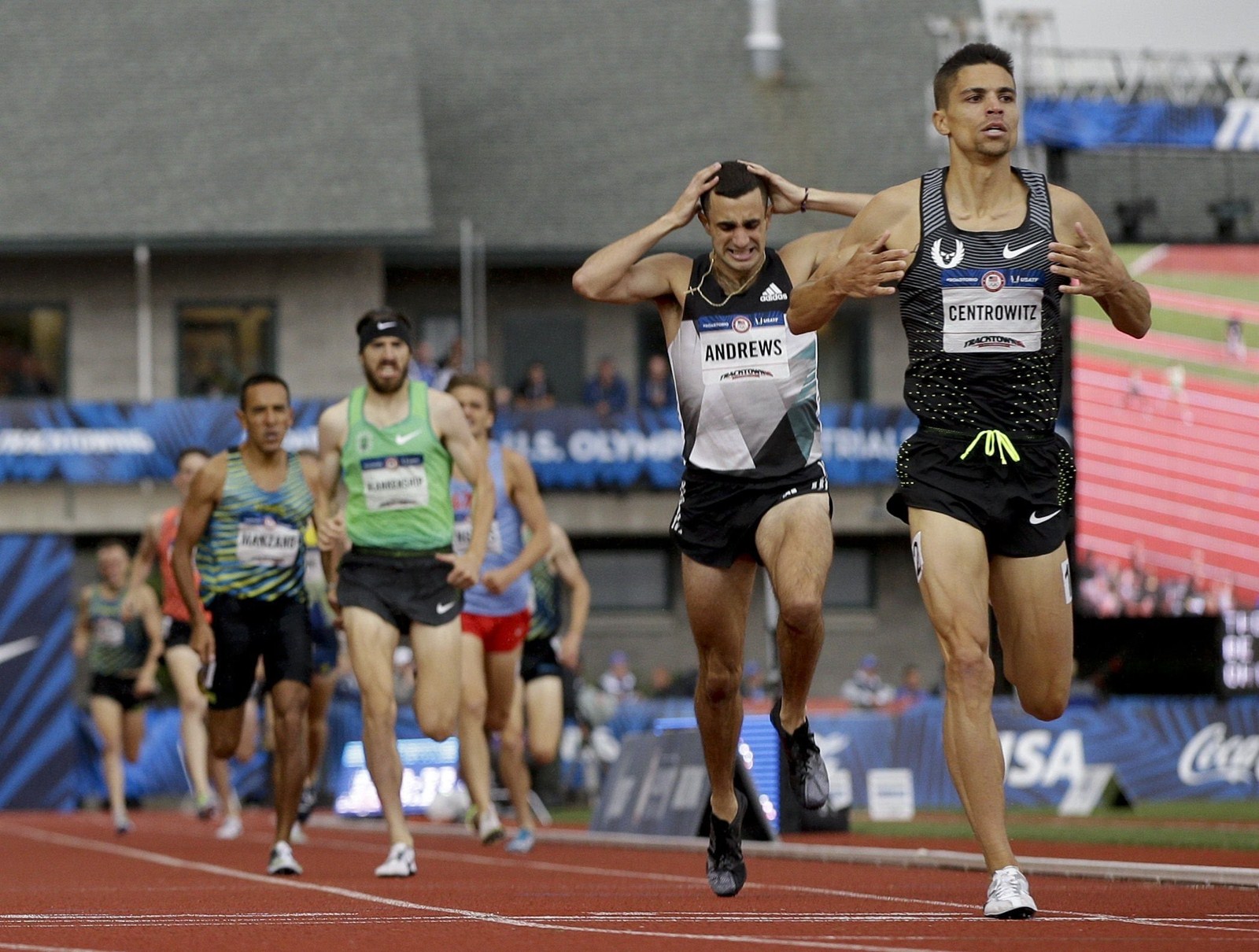 Matthew Centrowitz (Broadneck) was 0.04 of a second behind the bronze medalist in the 1,500-meter final at London 2012. ( Marcio Jose Sanchez/Associated Press )
PREVIOUS IMAGE

In his first Olympic appearance, at the age of 22, Matthew Centrowitz finished fourth at the London Games.

This devastated the Arnold native. He had spent years training to earn a medal. Making matters worse was how close he had come to bronze in the 1,500-meter final. Third-place finisher Abdalaati Iguider of Morocco crossed the line in 3 minutes, 35.13 seconds. A hard-charging Centrowitz finished in 3:35.17.

“Four-hundredths of a second. Being that close to winning a medal was tough to swallow,” Centrowitz said in a recent telephone interview. “I was happy to make the final, but when it was over and I got fourth, it was definitely disappointing. I wanted more. It fueled my fire.”

For Centrowitz, the road to the 2016 Summer Olympics in Rio de Janeiro began shortly after he returned from London. The 2007 Broadneck graduate had chased a second Olympic berth with a single-minded focus for the past four years, leading up to the July 11 U.S. Olympic trials at Oregon's historic Hayward Field.

Centrowitz, 26, who placed second behind Leonel Manzano at the 2012 Olympic trials, punched his ticket to Rio in style. He set the trials record in the 1,500 with a time of 3:34.09. That shattered by more than a second the previous best, established by Steve Scott in 1980.

“You have to finish top three at the trials to make the Olympic team, but I don't aim for the bare minimum. I was shooting for first,” Centrowitz said. “I'd never won a U.S. trials, so that was something I wanted to do. Setting records is the second-most important thing behind winning. Steve Scott is a legend in the sport, so beating one of his great records is a real honor.”

But Centrowitz did not go through four years of grueling training to just make the Olympics. He is determined to come home with a medal this time around.

“I remember thinking in London, ‘This is one of the coolest experiences I've ever had,'?” Centrowitz said. “Going into [Rio] now, I'm being a little more businesslike, more on a mission and not being so wide-eyed. I think that will help.”

Centrowitz is believed to be the first Anne Arundel County native to qualify for two Olympic Games. Matt Centrowitz Sr., who grew up in New York and is the track and field coach at American, was also a two-time Olympian.

“He can't really hold that over my head anymore,” joked the younger Centrowitz, who has the inscription “Like father, like son” tattooed across his chest.

Matt Sr. wasn't sure what to think when his son called to say he was getting the tattoo as a sign of respect and gratitude for years of mentorship.

“I thought somewhere I'd gone wrong as a parent that Matthew needed to get a tattoo to express our relationship. A Hallmark card would've been just fine,” said the elder Centrowitz, who qualified for the 1976 Olympics in the 1,500 and the 1980 Olympics in the 5,000.

Matt Sr. groomed his son from a young age, building workout regimens and setting goals. Centrowitz never will forget falling a few seconds short of the time his father had said he needed to run the mile in at one particular meet.

“I'm not going to lie. There are a lot of times I feared the man more than I loved him. But I wouldn't be where I am now if it weren't for him being so tough on me.”

Centrowitz followed in his father's footsteps by attending Oregon, which fields one of the NCAA's premier track and field programs. As a senior in 2011, he captured the NCAA outdoor championship in the 1,500, then turned professional.

For the past five years, Centrowitz has been a member of the elite Nike Oregon Project. His personal distance coach is Alberto Salazar, a teammate of Matt Sr.'s at Oregon and on numerous U.S. national squads.

“Alberto is a fantastic coach. He's always pushing the limits,” Centrowitz said. “No matter how good of a year I've had, Alberto is never satisfied. He has developed a training program that has allowed me to develop and improve.”

Beverly Centrowitz was also a college runner, but she stays away from offering any sort of coaching advice.

“My mom brings the TLC [tender loving care] for sure,” Centrowitz said. “She's always there to pick me up and reinforce that I'm doing a good job.”

It was no surprise that Centrowitz won the U.S. trials. He captured first in the 1,500 at the International Association of Athletics Federations World Indoor Championships in March. A month earlier, he finished first in the fabled Wanamaker Mile at the 109th Millrose Games in New York with a meet-record time of 3:50.63.

Still, Centrowitz has not convinced everyone that he is a top contender in Rio. Sports Illustrated predicted Kenya's Asbel Kiprop would win the gold medal in Rio this month, with countryman Elijah Manangoi taking silver and Algeria's Taoufik Makhloufi earning bronze.

Kiprop and Manangoi were first and second, respectively, at the IAAF World Championships, held last August in Beijing. Centrowitz was eighth in the outdoor race, more than a second behind the top-five finishers.

“That seems about accurate based off the last World Championships. I understand there are some doubters,” Centrowitz said. “That being said, those are just rankings. They don't mean anything. I take that stuff with a grain of salt and just worry about myself.”

“There are a lot of great 1,500 runners out there, and the places are interchangeable at every worlds and Olympics,” Centrowitz said. “I'm definitely feeling confident right now because I've had a really good year. I feel like I'm at the top of my game and have a winning mindset.”

Centrowitz was speaking from Park City, Utah, where he had just completed two weeks of high-altitude training under Salazar. Centrowitz called it a “legal way to get your red blood cell count up.”

Salazar also has Centrowitz running a lot of “over and under distances” — such as the 800 and 3,000 — in practice and competition to increase his speed and stamina. In fact, Centrowitz's final tuneups before departing for Rio were a 1,000 at an American Track League meet in Houston (he finished second, behind U.S. 800 champion Clayton Murphy) and an 800 at the TrackTown Summer Series in Eugene, Ore. (He finished fourth.)

Centrowitz leaves for Rio de Janeiro on Saturday, 10 days before running the preliminary heat in the 1,500. Semifinals are Aug. 18, with the finals two days later.

“It's all about acclimating to the time change, learning the lay of the land and making sure I've got everything dialed in,” he said. “I'll scale back the miles a bit after I get to Rio because the hard work will have already been done. It's just a matter of maintaining my fitness.”

Matt Sr. believes his son is in the prime of his career and thinks this Olympics offers the best chance to earn a medal.

“I'm proud that Matthew has stayed healthy, enthusiastic, disciplined and hungry,” he said. “For a runner, the motivation has to come from within. Clearly, the torch stayed lit for Matthew. His work ethic has only gotten stronger.”

The younger Centrowitz will have his father and two sisters in Rio cheering him on. Beverly Centrowitz is watching the games from the family's Arnold home after not being able to see the full range of events while in London four years ago.

“I know how much commitment and dedication goes into making an Olympic team. Total respect because I know how much work Matthew has put into this and the sacrifices he's made to reach this level,” she said.

Beverly sees a young man whose “confidence is always building,” but one who has remained humble at the same time.

“I think Matthew is a very grateful person,” she said. “He's grateful for the support of Nike, grateful for his teammates, grateful to his parents. He appreciates the journey he's on.”

PREVIOUS ARTICLE
Article 74 of 89
NEXT ARTICLE