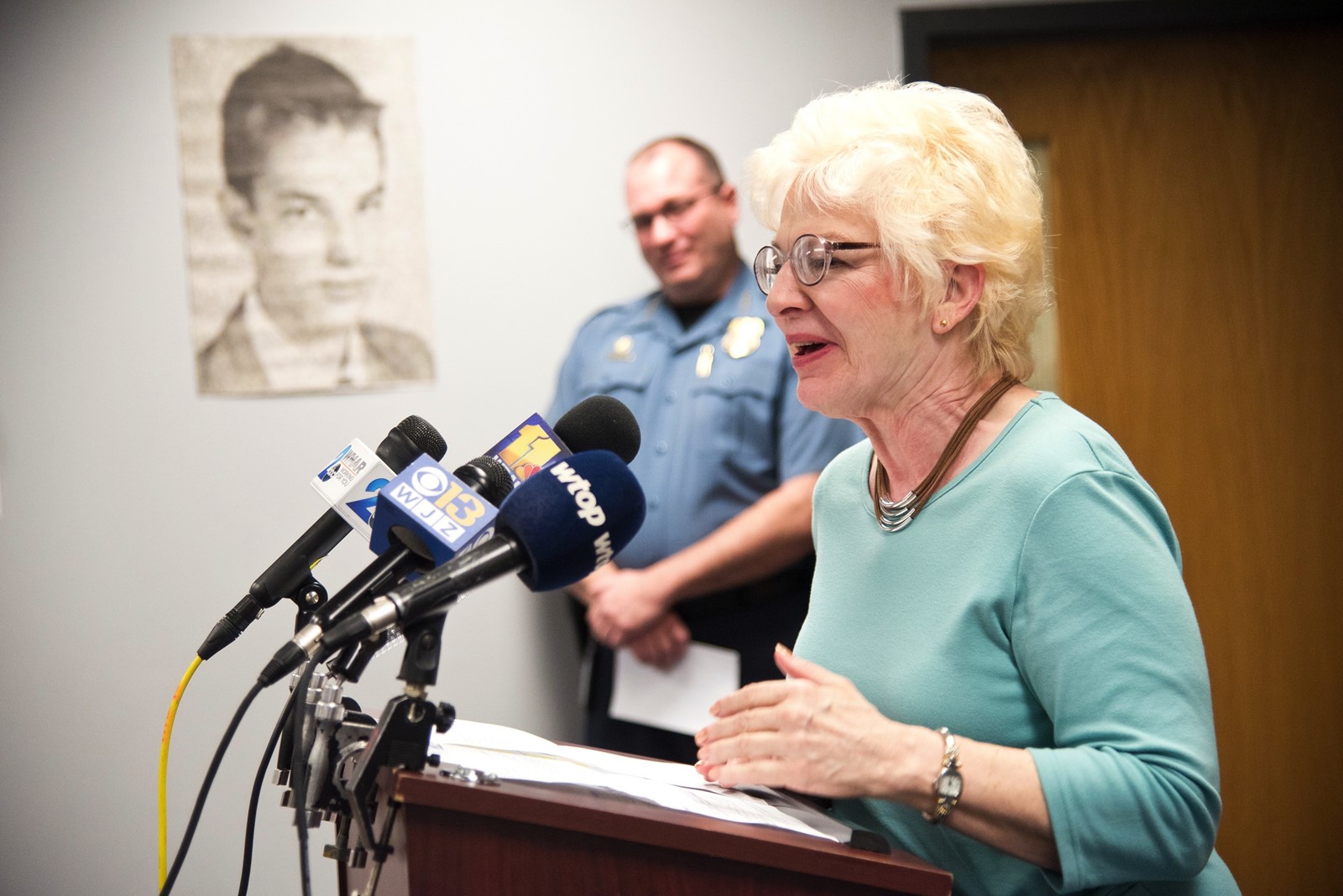 Mary Ellen Huffman thanks police for identifying her brother, Roger Kelso of Glen Burnie, as the body found during the construction of Marley Station Mall in 1985. (Joshua McKerrow/baltimore sun media group)
PREVIOUS IMAGE

After almost six decades, the family of Roger Hearne Kelso can give him a proper burial.

Kelso’s family are just thankful, said his younger sister Mary Ellen Huffman, who was joined by a half-dozen family members at police headquarters in Millersville. Now they can bury Kelso on a family plot in Loudon Park in Baltimore, she said.

“Just knowing that we have his body now,” Huffman said. “We’re going to have a memorial service.”

Kelso left his residence in 1962 or 1963 and was never seen again, police said. Evidence suggests Kelso was killed around the same time.

“When he left he was very peaceful, very hopeful,” Huffman said. “He was looking forward to life… and his next job.”

Kelso was a paperboy growing up, delivering the Sun Papers (now The Baltimore Sun), his family believed. Nobody knew what was to be his next endeavor, Huffman said. “He was so happy, we didn’t think to ask.”

Human remains were discovered on April 23, 1985, when a construction crew was clearing a lot to build Marley Station Mall and discovered the remains in a metal trash can.

Responding officers at the time recovered seven coins along with his remains, the most recent of which was dated 1963, suggesting he was killed some two decades before his remains were found.

The department’s cold case unit — tasked with knowing the ins and outs of every unsolved homicide — has been working on the case for 34 years, police said.

Homicide detectives expended all options at the time, said Sgt. Jacklyn Davis, police spokeswoman. They canvassed the scene, interviewed people, reviewed missing person’s reports and dental records, “they even enlisted the help of the Smithsonian Institute.”

Lt. John Jaschik recovered the remains along Marley Station Road that day. He retired in 2000, but felt compelled to attend the announcement — to achieve some form of closure himself.

“I have your whole case file,” Detective Regina Collier, the county cold case investigator now on the 1985 murder, told Jaschik. “Your report was great.”

In all honesty, Jaschik never thought the case would see a breakthrough, he told . “Once you did everything you could, you kind of wait and hope somebody says something.”

Police now say they’ve identified the remains as Kelso’s and that he was 19 or 20 years old at the time of his disappearance. They believe the homicide was a result of severe upper body trauma.

Davis said investigators have more information about the way that he died. Releasing more details to the public would jeopardize the integrity of the investigation, she said.

None of this, police said, would be possible without the services of Parabon Snapshot DNA Analysis Service.

“The technology involved here is extremely important to policing…” Altomare said. “The police department is here to bring justice to people. We need access to cutting edge technologies.

“It is not an overreach on police’s part to use this type of technology to bring closure to families.”

Kelso grew up in the 100 block of Whip Lane in Glen Burnie and attended Glen Burnie High School as part of its Class of 1961, police said. Huffman spoke at a press conference announcing the news Wednesday: Kelso was a good and trusting person — perhaps too trusting, she said.

“I just want to thank police. Anne Arundel county police they’ve been awesome,” Huffman said. “All these years and all these people still care.”

The poster states the remains were found with a grayish colored crewneck sweater, off-white colored long-sleeve shirt, khaki colored mens slacks with cuffed legs and adjustable buttons on each side of the waistband and black leather lace up shoes.

The Anne Arundel County Police Department is offering a $10,000 reward for information leading to an arrest and conviction for Kelso’s killing. Police urge anyone with information to call homicide detectives at 410-222-4731, or if they wish to remain anonymous, the police Tip Line at 410-222-4700.

It’s crucial for people to come forward, police said. No detail is too small and something that may seem inconsequential to a member of the public could lead to justice, they said.

Identifying the victim is one of the first steps in a homicide investigation, Collier said, though in many cases it’s not a herculean feat that involves decades of searching around the country with FBI help.

Regardless, “it’s like I’m starting from scratch,” Collier said. She’s interviewed family members as far away as Oregon and they’ve helped by describing who Kelso was before he went missing. But none know of the events immediately preceding his death.

PREVIOUS ARTICLE
Article 10 of 96
NEXT ARTICLE