Baltimore Club-style dance persists past its peak with support of local dancers, organizers 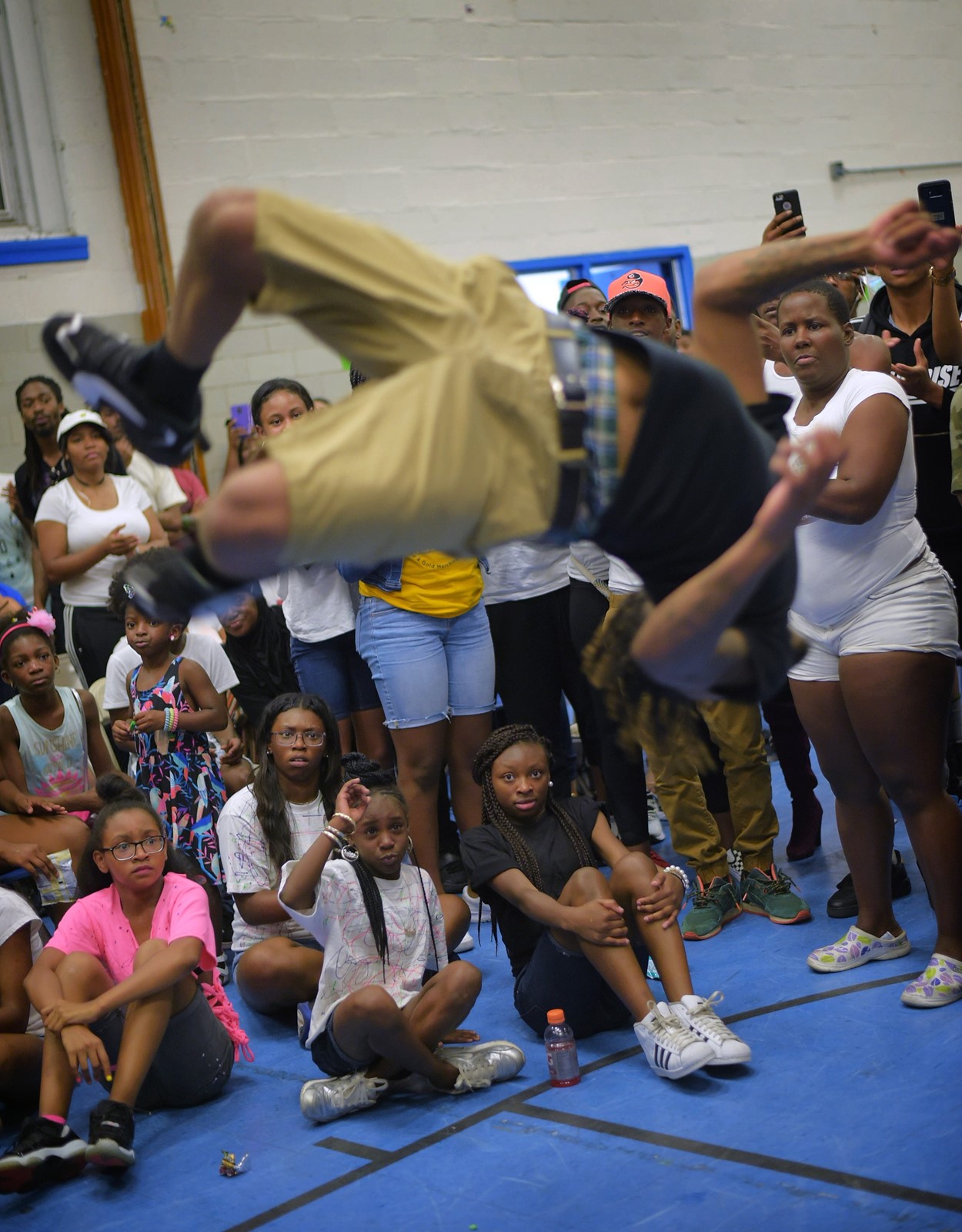 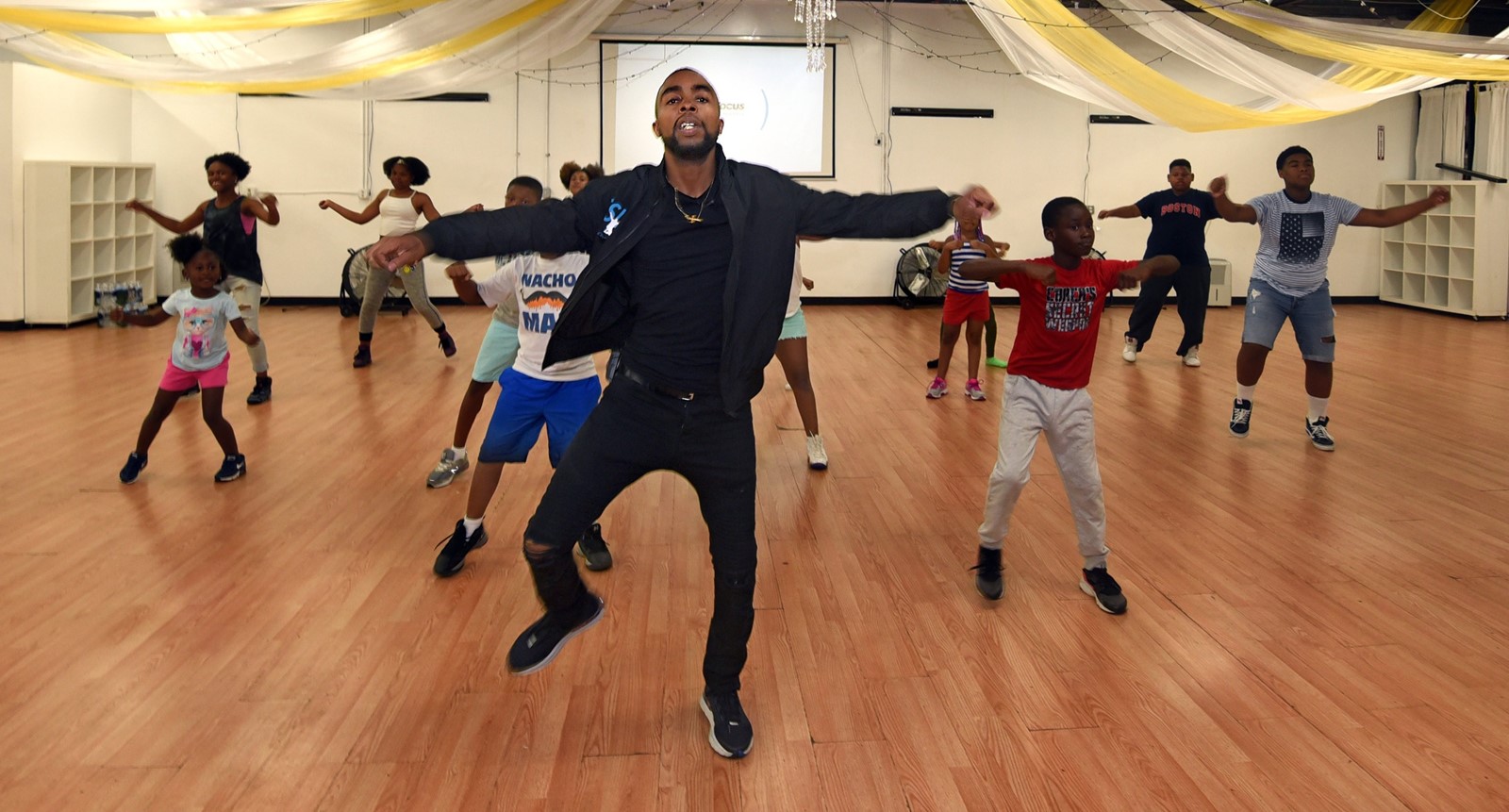 At B’more Fit Studio, Terry Wedington, center, founder of Team Squad Up dance crew, teaches the fundamentals of Baltimore Club dancing; he grew up during its heyday. (Algerina Perna/Baltimore Sun ) 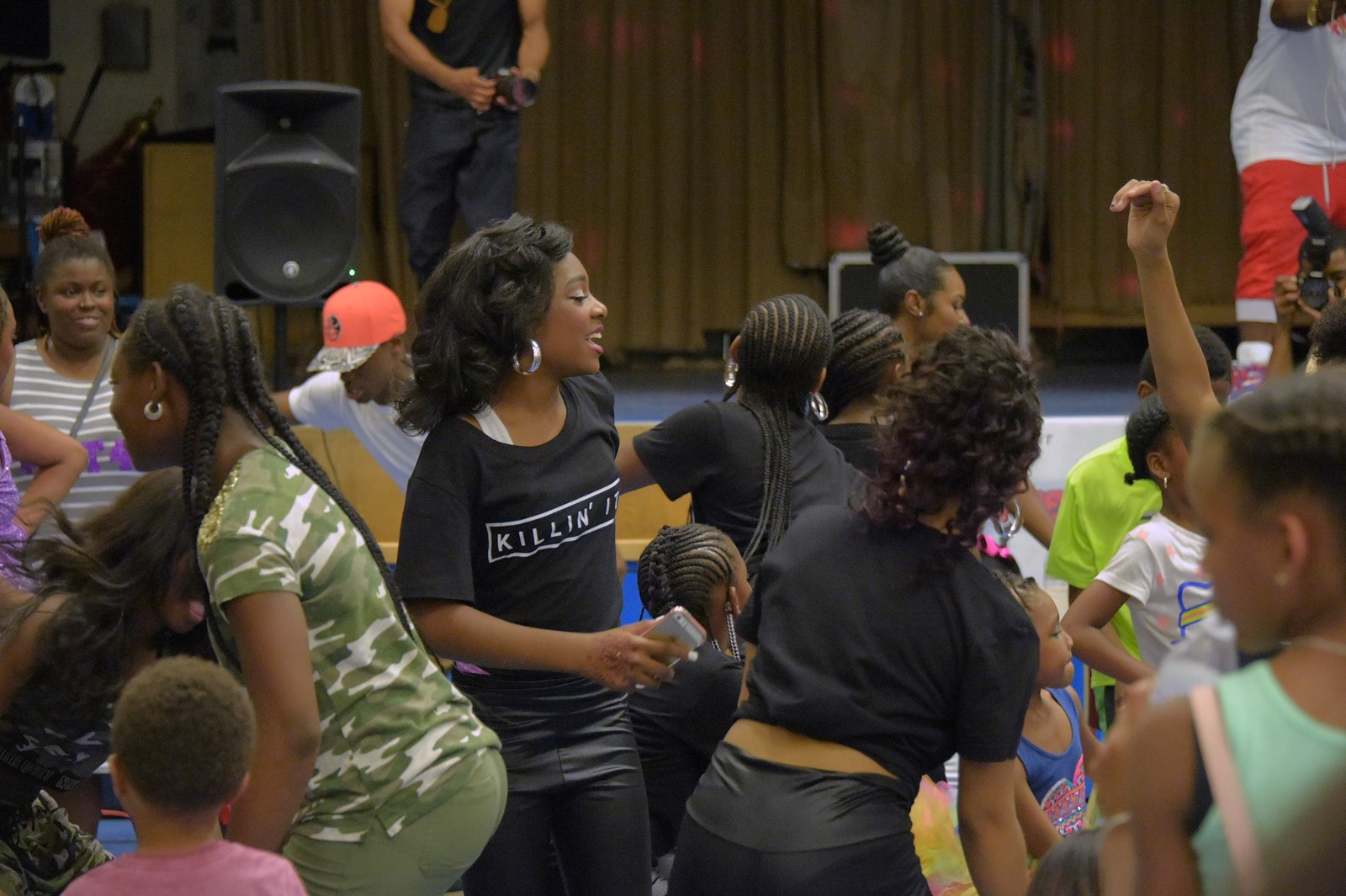 Spectators take part in free-form dancing to DJ music during the Queen of Baltimore dance battle. Dance competitions are one means Wedington and others hope to use to revive Baltimore Club dance. (Karl Merton Ferron/Baltimore Sun )
PREVIOUS IMAGE

erry Wedington was in high school when he encountered a dance move that would affect his life trajectory. It was called the “crazy legs,” a fierce shaking of both legs, combined with a simultaneous tapping of the feet and bouncing of the shoulders for added style.

“This guy came to school, and he was doing this certain thing with his leg,” said Wedington, 26, who was in the ninth grade at the time. “I said ‘What’s that? Can you teach it to me?’?”

The crazy legs is one of many dance moves born out of Baltimore Club music, the city’s frenetic genre that has evolved from house music, incorporating elements of hip-hop and other samples at a fast-paced 130 beats per minute.

Wedington grew up during Baltimore Club’s heyday, about a decade ago. Often referred to as “rock off” or “shake off,” Baltimore Club dance became popular in the city’s African-American community, based on energetic footwork, in-and-out knees and punctuated by arm movements. There were dance crews who competed against each other at recreation centers throughout the city and during teen nights at major nightclubs like Paradox, where a combination of Baltimore Club hits by the late icon Big Tony, a.k.a. Miss Tony, and DJs like Rod Lee, DJ Technics, Blaqstarr and the late K-Swift dominated the sound system.

Since then, Baltimore Club’s prominence has plateaued. But people like Wedington, the founder of dance crew Team Squad Up, and Errigh “Neek B’Chillin” LaBoo, founder of Bmore Than Dance,are hoping to revive the local dance scene for future generations — via dance classes, competitions and community events.

“They’re kind of evolving to a place where they are now creating programming around the art of the Baltimore Club dance movement, whereas they’re typically in the streets, just having dance sessions without a real agenda Now, they’re focusing more on mentorship and teaching classes ... and making it feel like there’s more structure around the movement,” said rapper TT the Artist, born Tedra Wilson, who is known for incorporating the Baltimore Club style in her music. “They’re getting more organized, and that’s attracting a lot more young people to the club community.”

During Baltimore Club’s peak, DJs were receiving international recognition and collaborations with major artists, and people had “fun from start to finish” at local clubs, Wedington said. But it was more than just recreation.

“It gave us something to do instead of being out on the streets,” he said. “Now, there’s none of that. ... They don’t cater to Baltimore Club like they did before. You’ll get events here and there, but it’s not like every weekend like how it used to be. You don’t have different parties catering to that sound, or different DJs dropping CDs, mixtapes. They’re not promoting that stuff like how they did back then.”

Major clubs like Paradox and the original Hammerjacks — once a stage for Baltimore Club dancers — have closed, as have some recreation centers, leaving little place for lovers of Baltimore Club to dance, practice and experiment. Some say the signature dance style has been preempted by other places, most notably New Jersey, thanks to social media platforms like YouTube.

Others cite the radio — once used by major DJs like 92Q’s K-Swift as a pivotal force to spread the scene’s growing sound — for limiting the club music slot to less than an hour a day. Johnny “Porkchop” Doswell, 44, DJ and host on 92Q, said club music’s limited airplay is due to increased demand of more mainstream music and trending genres, like trap music.

“Ten years ago, club music was almost a driving force on the radio. We can’t play club music as much as we want to,” said Doswell. “We have to play the hits, too.”

But Thomas DeFrantz, professor of dance and African and African-American studies at Duke University, said that the decline in Baltimore Club dance can’t be pinned on one thing. It’s a natural phenomenon, he said — most dances are meant for the moment, “not for the ages.”

“Black social dances grow when people make them … in garages, on street corners, in the suburbs. These dances are urgent to our self-understanding and identity, but they don’t last really long,” said DeFrantz. “They last maybe three years. Then, every once in a while these dances hit a national or global level.”

Similar to the Detroit jit another energetic dance with a hyperlocal following, Baltimore Club’s dance style has another interesting element to it, DeFrantz said — it’s propelled by youth.

“There is a long tradition of dances that are really for the youngest dancers that have lots of energy. Generally, you can’t do them if they’re older, because it [requires] so much energy.”

That youthful energy is what Wedington’s TSU and LaBoo’s Bmore Than Dance hope to capitalize on.

In November 2007, LaBoo, 29, began hosting King of Baltimore, a major club dance competition in which young men in the city displayed their best moves while battling it out for a cash prize.

The event soon evolved into a movement and a platform for young dancers. Bmore Than Dance began hosting more than 150 events a year throughout the city, including annual competitions like Queen of Baltimore, a female-spinoff of the King of Baltimore, and We Run This City, a face-off between multiple dance crews.

During this year’s Queen of Baltimore, held in June, Elana “Lanii” Keel, 12, of Randallstown, unleashed a fury of the heel-toe and sidekicks — signature Baltimore Club moves — on stage, her limbs thrashing at every side at a breakneck beat. The crowd erupted in cheers, and Elana made it to round two.

In between rounds, impromptu battles and dance displays happened within the crowd. Markel Cash, 22, broke into the center of one circle with a ninja-like back flip that left the crowd in awe.

“It’s basically old-school and new-school put together, which is fun,” Elana later said.

Cash, who has been dancing for over a decade, said the Baltimore Club dance moves are more complicated now — something he noticed when he moved back to Baltimore after a five-year absence.

“Now, they’re incorporating breakdancing, shuffling and different dance styles to make it stand out more. … Every new, younger dancer — they just pick from other genres and incorporate club,” Cash said.

LaBoo isn’t too concerned about the dance itself changing. But, overall, he feels like Baltimore Club’s dance scene hasn’t maintained its momentum, even while it’s taken off in other places like New Jersey.

“At this point, it’s like in the rebuilding stage. For me, it’s hard to give up because this is home. This is where we started. This is where it was homegrown,” LaBoo said.

Wedington said he has also seen other cities studying the “shake off” and incorporating Baltimore Club-style dance into their routines on social media and during his travels to other places around the country. But nothing can replace the local flair.

“Watching it on YouTube, you can imitate, but it won’t be like if it somebody from Baltimore teaching it to you,” he said. “Know that Baltimore Club dance is rising, and it’s becoming in demand all over, to be honest. It just takes that person to get to those places.”

Wedington is working to be that person.

The dancer, also known as “TSU Terry,” got his start battling in Bmore Than Dance competitions, before forming his own crew — Team Squad Up, or TSU — which went on to tour with musicians like TT the Artist, and continues to perform at schools and various entertainment events like UniverSoul Circus.

For Natasha Newnam, 38, of the Eastern Shore, it was worth traveling an hour and 45 minutes for every Saturday for seven weeks — so her daughter Destiny Smith, 12, could learn the basics of her mother’s childhood pastime.

“I want her to have that experience,” Newnam said.

“Back in the day ... we used to battle each other at house parties and outside on the streets. Dancing was our life,” Potts-Eddington said, recalling her nights at Liberty Recreation Center. “We did Friday night dance. At 8 o’clock, we had our dollar tickets. … I was learning dances on the corner or in the recreation center. It wasn’t YouTube. It wasn’t Instagram. It wasn’t on Facebook. It was none of that, so when we heard about a dance, we was in there trying to learn it together. … That’s what I wanted my [son] to experience.”

Still, LaBoo and Wedington have hope that through programming, city investment and local support, the Baltimore Club dance scene could be better than it used to beeven at its peak.

“I see Baltimore Club going far, and I really think it’s still strong today. I feel like it could be stronger. … If people were to come to a common ground and actually become a movement, then there’s no stopping us.”

PREVIOUS ARTICLE
Article 52 of 89
NEXT ARTICLE