Baltimore-based home stagers master the art of appealing to buyers 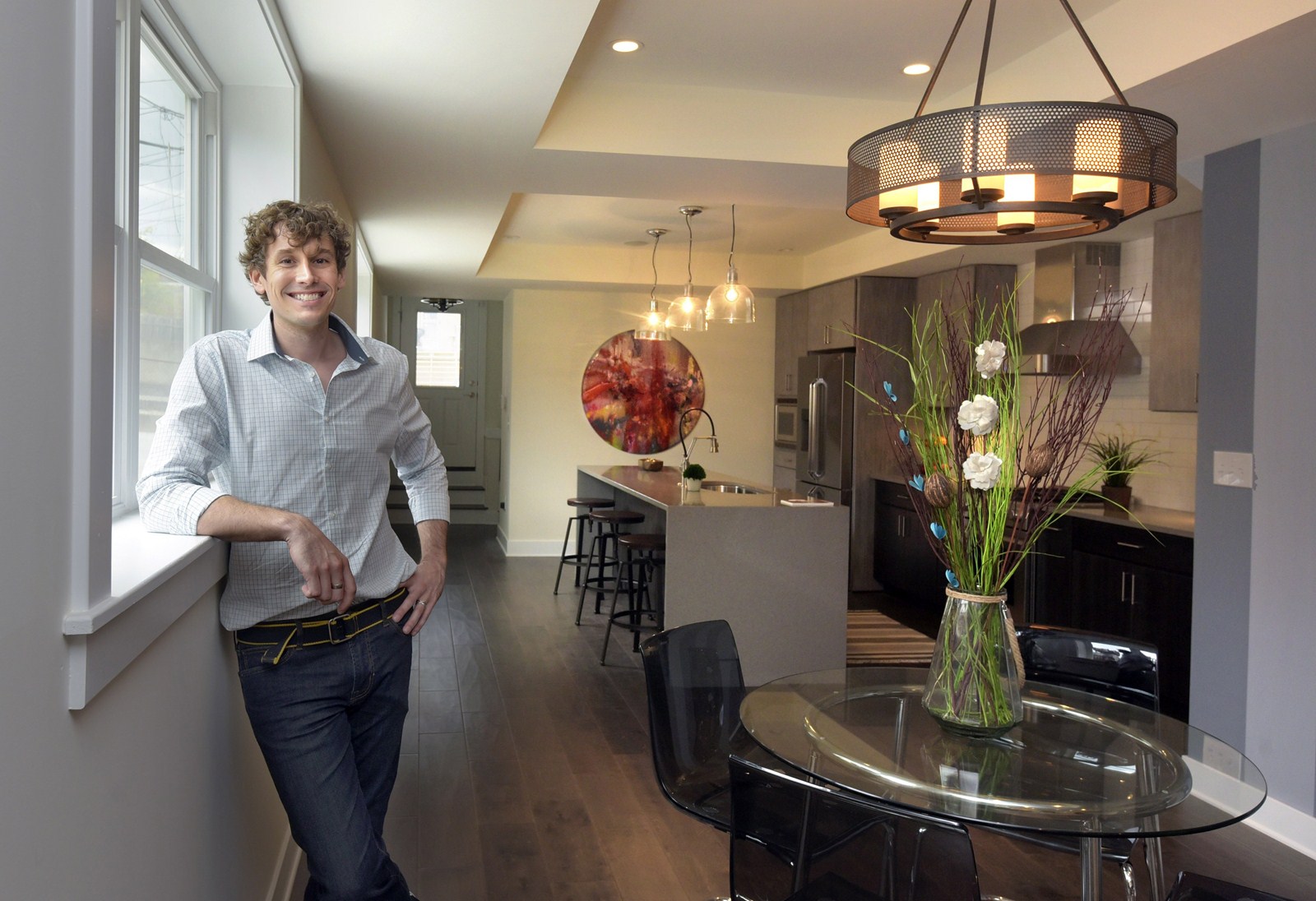 “I was always interested in interior spaces, [but] I was never interested in the interior-design aspect of the business,” says Drew Foxwell, in a home he staged. “It's too detailed.” ( Algerina Perna/Baltimore Sun photos ) 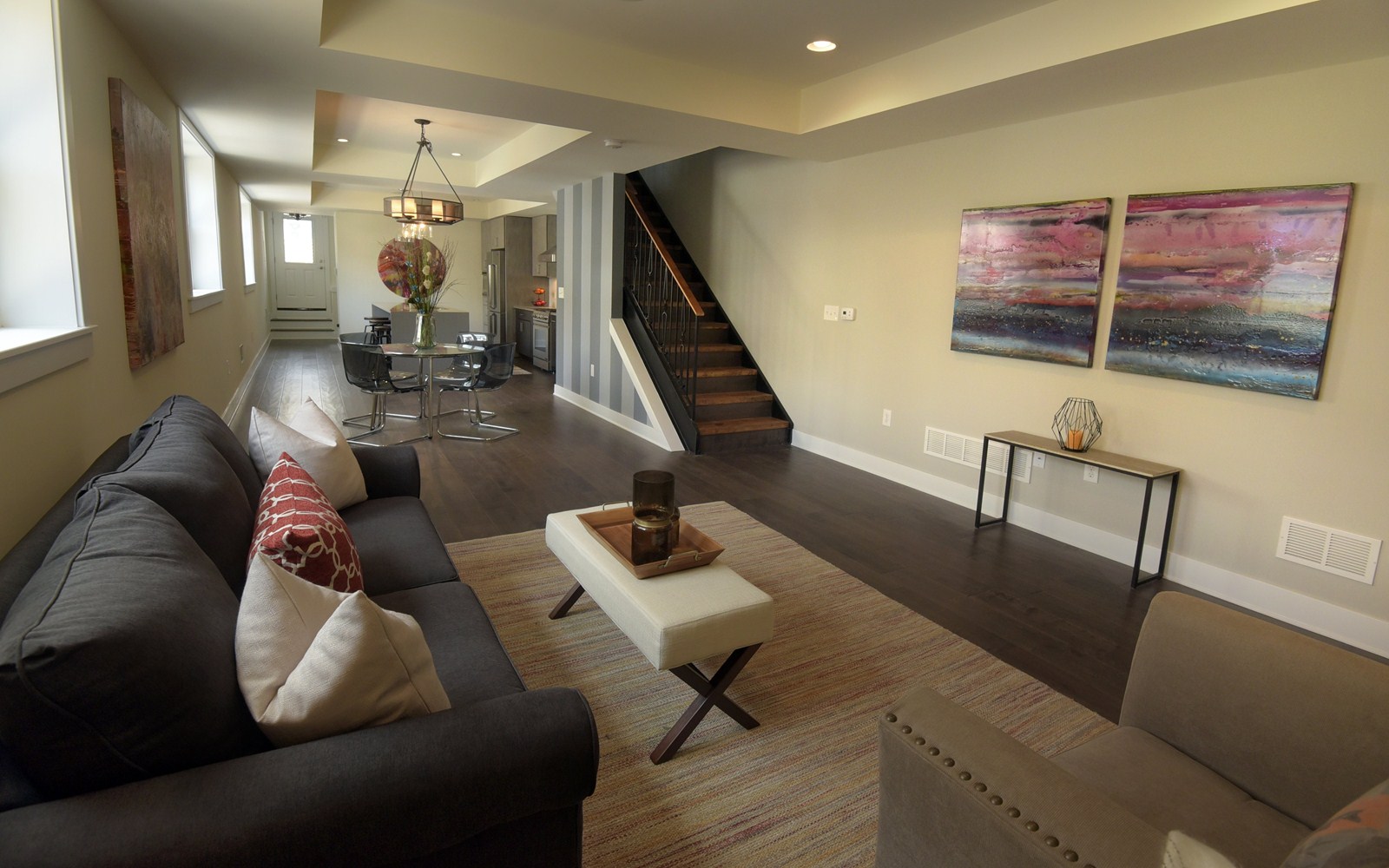 Foxwell added paintings by local artist Kelly L. Walker to this home he staged on South Highland Avenue to create an inviting space in which buyers could see themselves living. “I'm just in there to make things look good and I'm out," Foxwell says. ()
PREVIOUS IMAGE

he two-story townhouse in the Banneker Place neighborhoodof Columbia was just like the others in the complex — except that it was empty and had been sitting on the market for about a year.

Jaclyn Riedel was hired to transform the shell — which featured soft, subtle mauve-colored walls, Brazilian cherry-wood floors and beige curtains — into an inviting space in which buyers could see themselves living.

In less than a day's time, Riedel swooped in, mapped out a plan to make it feel like a “livable space that was comfortable and functional,” and brought in enough furniture, accent pieces (right down to the Granny Smith apples placed atop the teal green plates in the kitchen) and artwork to fill the two-bedroom home. Within two weeks, an offer was made on the $254,900 house.

“I came in and I put in items that were relatively neutral and not offensive to the general population — none religious, not very taste-specific — items that were going to please a broad range of people,” said Riedel, who has a background as a wardrobe stylist and set designer for television shows and films, including “Veep,” “House of Cards,” “The Wire,” “He's Not That Into You” and “Live Free or Die Hard.”

Welcome to the life of a home stager. These fast-moving, detail-oriented workers are called in by real estate agents or homeowners looking to better display a home's decor so prospective buyers can envision themselves living there. Ideal for vacant homes, recently flipped properties, or hard-to-sell houses, stagers and their clients say that their work helps homes become more attractive and cuts the time they are on the market. Services range from as low as $250 for a simple walk-through and organizational consultation at a smaller house, to about $10,000 to decorate a five-bedroom home.

“Staging homes allows a buyer to come in and see the home at its best,” said Allison Sheff of Berkshire Hathaway HomeServices in Baltimore. “Stagers have a great sense of style. They're not too wild and not too flamboyant. It's shiny and new when a stager drops in. It gives you sense of excitement.”

Sheff, who has been a real estate agent for 12 years, said home stagers have grown in popularity over the past year — especially for vacant homes.

“I think that Realtors are seeing the value in it,” she said. “They are seeing that giving a home that shine and special treatment really does work.”

“The market calls for it,” said Frye. “People have become more savvy about the process. They watch an awful lot of HGTV. They are seeing the value of a staged home over not staged. They take into consideration [that] a person who staged the home, it's an indication of how they took care of the home. It's a more positive image for the buyer.”

Last year, Frye staged 237 properties, and he's in line to do a similar number this year.

“Most of the properties I stage sell within five to 10 days,” he said. “Oftentimes, I've had them go overnight.”

Unlike the work of interior designers, which often focuses on the taste of a particular client, home stagers aim to create a look that has general appeal.

This more basic approach was what appealed to Drew Foxwell, who has been working in the home staging industry for two years.

“I was always interested in interior spaces, [but] I was never interested in the interior-design aspect of the business. It's too detailed,” said Foxwell, who launched his company, Downtown Home Staging, at the end of last year.

Foxwell, a Parkville resident, has worked as a licensed Realtor but prefers the work of a home stager.

“On this side of the business, I find that I can be successful making things look good,” he said. “I'm just in there to make things look good and I'm out. I don't have to make sure the customer likes the color. ... It's a simpler form of design.”

The former is “more of a true design aspect. You have to know more about interior structures and electric. You have to know a lot more of the architecture of design,” she said, while home staging “is about furniture and accessories. This is something that is more about aesthetic.”

But for David Briskie, an interior designer for the past 25 years who has also staged about 100 homes during his career, there is little difference other than the length of time spent on each project and client.

“If you have that [creative] quality, you can do either,” he said.

Unlike interior designers, who typically purchase new furniture and accents for clients, stagers use pieces — many from their personal collections — to decorate the space. Amassing such large amounts of furniture requires stagers to master a bit of organization — a storage system is key — and utilize resources such as furniture rental contacts.

Riedel credits her organization skills with enabling her to stage a home in less than half a workday.

“I have everything in Rubbermaid storage bins,” said Riedel, who has all of her furniture and accessories stored in her attic and a utility closet in her Columbia home, and in the basement of her parents' nearby home. Everything is labeled and organized in a computer system. “It's all accessible and easy to load into trucks. However, I will be getting a proper storage area soon. I'm kind of outgrowing the spaces.”

Frye stores his furniture in a 3,000-square-foot warehouse. With the size of his collection, he's able to stage 40 homes simultaneously.

“I thought the overall appearance and touch was really ideal for the space,” White said. “All accent of the pieces really showed well. ... The comments [from open house visitors] generally spoke to ‘they could see themselves in this one.' That is the greatest feedback they can give.”

Home stagers aren't only used for selling homes. In some cases, clients hire them to transform their houses and other venues for weddings, bar/bat mitzvahs and other special occasions. Briskie, who heads David Briskie Design in Baltimore, has done numerous events throughout the region, as well as in New York and Los Angeles.

Foxwell is interested in branching into staging for special events. He sees it as an evolution of his career.

“I'm building inventory all the time,” Foxwell said. “Right now, I'm wearing all the hats. As I grow, I'm picking up more pieces of the puzzle. I need to have whatever I need for the next job.”

PREVIOUS ARTICLE
Article 110 of 149
NEXT ARTICLE