U.S. students reach out to Palestinians during year abroad 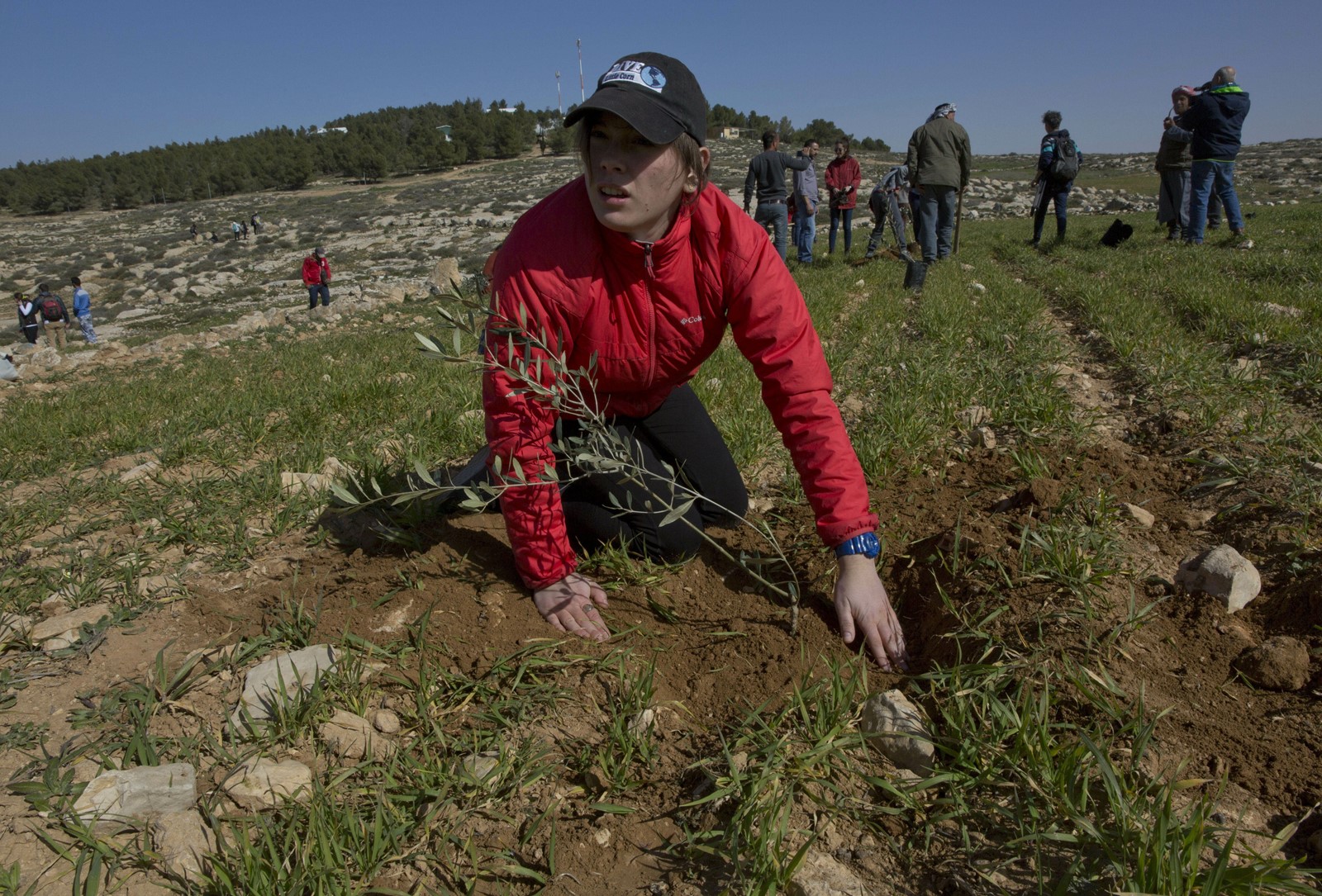 In a departure from past programs focused on strengthening ties with Israel and Judaism, the new crop of rabbinical students is reaching out to the Palestinians. The change reflects a divide between Israeli and American Jews that appears to be widening.

On a recent winter morning, Tyler Dratch, a 26-year-old rabbinical student at Hebrew College in Boston, was among some two dozen Jewish students planting olive trees in the Palestinian village of At-Tuwani in the southern West Bank. The only Jews that locals typically see are either Israeli soldiers or ultranationalist settlers.

“Before coming here and doing this, I couldn’t speak intelligently about Israel,” Dratch said. “We’re saying that we can take the same religion settlers use to commit violence in order to commit justice, to make peace.”

Dratch, not wanting to be mistaken for a settler, covered his Jewish skullcap with a baseball cap. He followed the group down a rocky slope to see marks that villagers say settlers left last month: “Death to Arabs” and “Revenge” spray-painted in Hebrew on boulders and several uprooted olive trees, their stems severed from clumps of dirt.

This year’s student program also includes a tour of the flashpoint West Bank city of Hebron, a visit to an Israeli military court that prosecutes Palestinians and a meeting with an activist from the Hamas-controlled Gaza Strip, which is blockaded by Israel.

The program is run by “T’ruah: The Rabbinic Call for Human Rights,” a U.S.-based network of rabbis and cantors.

Most of T’ruah’s membership, and all students in the Israel program, are affiliated with the Reform, Reconstructionist and Conservative movements — liberal streams of Judaism that represent the majority of American Jews. These movements are marginalized in Israel, where rabbis from the stricter Orthodox stream dominate religious life.

The T’ruah program, now in its seventh year, is meant to supplement students’ standard curricular fare: Hebrew courses, religious text study, field trips and introductions to Jewish Israeli society. Though the program is optional, T’ruah says some 70 percent of the visiting American rabbinical students from the liberal branches of Judaism choose to participate.

The yearlong program is split into one semester, focused on Israel’s occupation of the West Bank, and another, on alleged human rights abuses inside Israel.

“We want to propel them to action, so they invite their future rabbinates to work toward ending the occupation,” said Rabbi Ian Chesir-Teran, T’ruah’s rabbinic educator in Israel.

The group began its trip in the most Jewish of ways, a discussion about the weekly Torah portion that turned into a spirited debate about the Ten Commandments.

“The Torah says don’t covet your neighbor’s fields, and we’re going to a Palestinian village whose private land has been confiscated for the sake of covetous Jews building settlements,” Chesir-Teran said.

As their bus trundled through the terraced hills south of Hebron, students listened to a local activist’s condensed history of the combustible West Bank, which Israel captured in the 1967 Mideast war.

As part of interim peace deals in the 1990s, the West Bank was carved up into autonomous and semi-autonomous Palestinian areas, along with a section called Area C that remains under exclusive Israeli control.

The destinations of the day — the Palestinian villages of At-Tuwani and Ar-Rakkes — sit in Area C, also home to around 450,000 Israeli settlers. Palestinians seek all of the West Bank as the heartland of a hoped-for independent state.

The group was guided by villagers to their olive trees — an age-old Palestinian symbol and a more recent casualty of the struggle for land with Israeli settlers.

Yishai Fleisher, a settler spokesman, blamed the attacks on the “atmosphere of tension” in the West Bank. “We’re against vigilantism, unequivocally,” he said.

As Israeli soldiers watched from the hilltop, Palestinians and Jews dug their fingers into the crumbling soil, setting down roots where holes torn out of the field hinted at recent vandalism.

Dratch said he came of age in Pennsylvania during the violent years of the second Palestinian uprising in the early 2000s. “My religious education was steeped in fear of Palestinians,” he said.

But in college, Dratch’s ideas about Israel changed. Dratch says he still supports Israel, while opposing its policies in the West Bank.

With hundreds of young American rabbis sharing such sentiments, some in Israel find the trend alarming.

“I worry about a passion for social justice becoming co-opted by far-left politics among future American Jewish leaders,” said Yossi Klein Halevi, a senior fellow at the Shalom Hartman Institute, a Jewish research center in Jerusalem.

“Future rabbis are marginalizing themselves from the overwhelming majority of Israeli Jews,” he added.

As Israel heads toward elections in April, opinion polls point to another victory for Prime Minister Benjamin Netanyahu and his religious, nationalist allies.

Two weeks after visiting At-Tuwani, the group received disheartening news: half of the 50 trees they’d planted had been uprooted, apparently by settlers. The students scrambled to make plans to replant.

Dratch said that while his time in Israel has provided him with plenty of reasons to despair, he still harbors hope for change. “We’ll be sharing these stories to give people a full picture of what it means to care about this place,” he said.

PREVIOUS ARTICLE
Article 20 of 145
NEXT ARTICLE