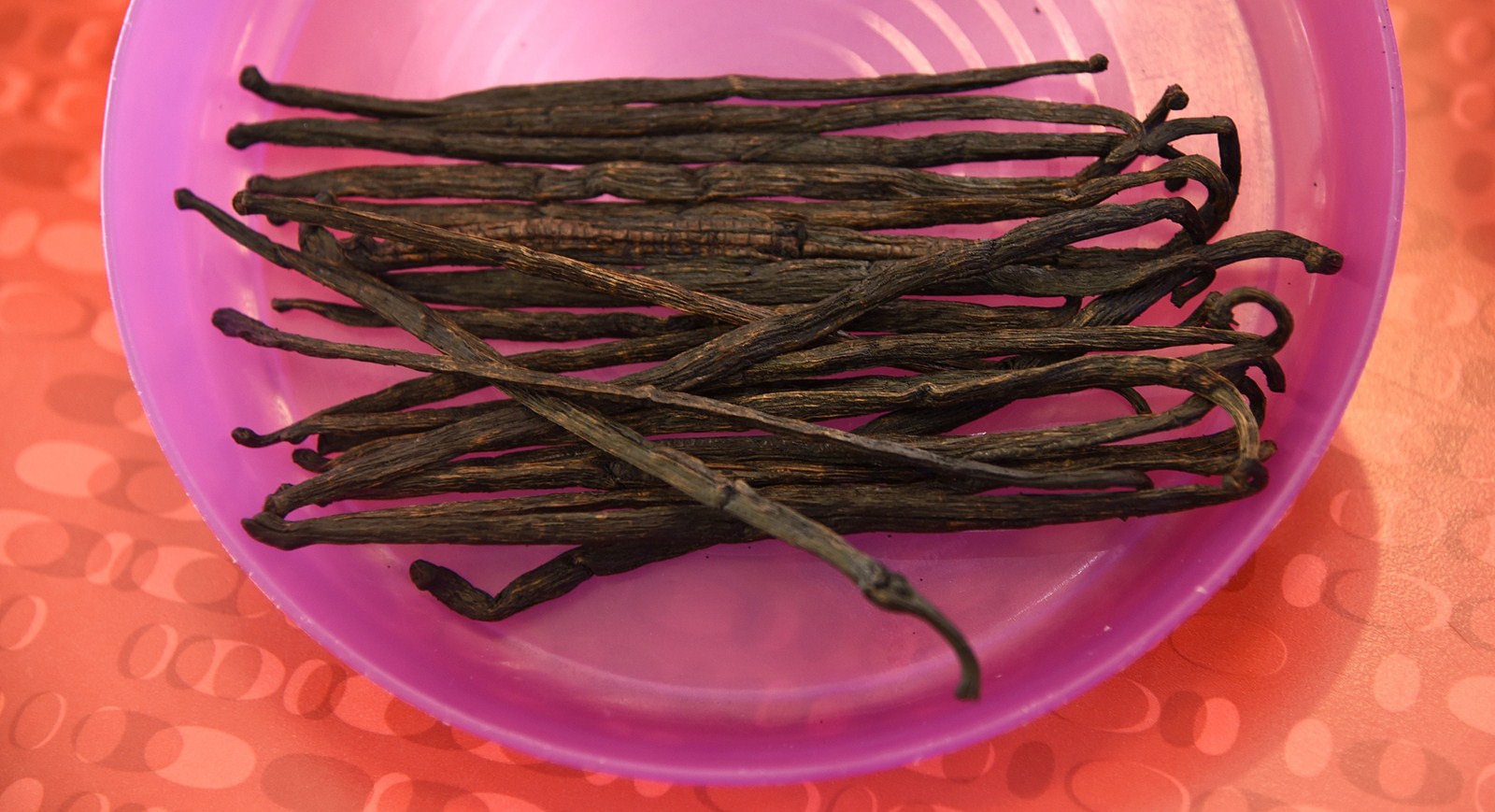 Most vanilla beans are grown in Madagascar, which is experiencing a vanilla bean shortage. McCormick has raised prices twice this year, in stores and in its industrial businesses, including for all sizes of Pure Vanilla Extract. Another price increase is on the way early next year. ( Barbara Haddock Taylor/Baltimore Sun )
PREVIOUS IMAGE

It's one of the world's most popular flavors.

But vanilla, a baking staple that sees demand grow as the holiday season approaches, is in short supply this year — and costlier than ever.

A vanilla bean shortage in Madagascar, provider of 85 percent of the world's vanilla, and a decline in production elsewhere in the world have caused prices to jump. Meanwhile, demand for vanilla is growing, as consumers increasingly want natural ingredients in their candy bars, ice cream and cakes.

That means higher costs not only for consumers, but also for bakeries, creameries, candy and beverage makers and suppliers such as Sparks-based McCormick & Co. Inc., which sells vanilla flavorings in stores and to food manufacturers.

McCormick has raised prices twice this year, in stores and in its industrial businesses, including for all sizes of Pure Vanilla Extract. Another price increase is on the way early next year for vanilla extract and other McCormick vanilla products.

The “unprecedented limited supply of quality beans” has driven prices up 230 percent since 2014, a McCormick spokesman said. The company said it has enough beans and extract to meet holiday demand.

“Vanilla in particular is in a situation where there's a worldwide shortage,” Lawrence Kurzius, McCormick's president and CEO, told analysts after releasing earnings Sept. 30. “We've been approached by customers of competitors who are experiencing defaults, and are having difficulty getting vanilla at any price.

“The raw material, and the shortage of that raw material is going to dictate a higher price across the whole market.”

Market demand has shifted away from artificial vanilla, he said, as consumers want natural flavors.

Madagascar, an island nation off the coast of Southeast Africa, has long controlled the market for the labor-intensive crop because low wages allow for production even in extreme price drops.

When demand during the last major vanilla shortage in the early 2000s drove prices up, countries such as Indonesia, India and Papua New Guinea began growing the difficult-to-cultivate crop.

Then, “when the price crashed, other countries took vanilla out [of production] and planted other crops,” said Josephine Lochhead, president of Cook Flavoring in Paso Robles, Calif. “And even Madagascar's production decreased, because that's a lot of work for $20 a kilo ... and now there's a shortfall.”

Lochhead's company sells vanilla to bakeries, dairies, ice cream makers and coffee companies such as Starbucks, and a limited amount to stores on the West Coast.

“It is a one-of-a-kind flavor,” Lochhead said. “There's nothing like it. It brings out the best in ingredients in dairy and baking. It's one of the flavors that everybody loves.”

She traces the current crisis to around 2011, when prices began rising from about $25 per kilogram of raw beans to the current $400.

As prices go up, she said, some growers take shortcuts, harvesting beans early, or skimping on the three-to-six-month-long curing process. Both practices contribute to the difficulty of sourcing high-quality beans.

“We want the finest vanilla possible we can produce in the world ... and that's not the easiest feat in today's market,” Lochhead said. “It requires traveling to areas where vanilla is grown,” to work with companies that work with farmers.

“The secret is that it's harvested when it's ripe,” she said. “But when prices are high, farmers have every incentive to harvest early.”

Retail prices of some qualities of vanilla have nearly doubled over three years, but consumers so far seem willing to pay.

Costs have increased for both the vanilla beans and extract that Aaron McNeil uses in frosting and batter at Midnite Confections Cupcakery in Federal Hill. But because he uses the flavoring in small amounts, he hasn't seen an impact on business — yet. He's not sure what to expect, as this is the first shortage he's faced in the six years he's run the shop with his mother, Mary McNeil.

“It does seem to be a bit more sparse,” McNeil said. “Sometimes we can't get it from where we normally get the vanilla beans, and we try to stretch it a little. ... We don't like to use imitation vanilla. There's a distinct difference between the two.

“We haven't come to the point where we've run out. But it is challenging sometimes.”

David Alima, co-owner of the Charmery ice cream and yogurt shop in Hampden, has seen the cost of pure vanilla extra double from about $80 per gallon to about $160. He said he has resolved not to pass the increase on to customers, or to switch to a vanilla blend.

“We use vanilla in every single thing we do here,” said Alima, who runs the shop with his wife, Laura. “For ice cream, vanilla is essentially like salt. We add it to every flavor. It makes chocolate taste more chocolate.

“We only use pure vanilla, not vanilla blend or vanillin. You can imagine we go through quite a bit of it.”

But because vanilla is measured in just ounces into each batch, he said, the cost increase “doesn't hurt to the point where it's not absorbable.”

“Because it's a bad year, I don't want that to go to my customers. The beautiful thing about knowing where your ingredients come from is this increase did not come out of the blue to us. ... The hope is that it's a much better harvest this year.”

Tim Parker is CEO of Baltimore-based Parker Flavors, which sells vanilla wholesale to the food and beverage industry.

Though Madagascar production has been improving, he said, little relief in pricing is likely until well into next year. Wholesale prices for vanilla beans have doubled to $200 per pound, and pure vanilla extract is more than $200 a gallon — the highest levels since 2003, the peak of the last crisis.

“At these prices, the product has simply lost much of its value,” Parker said. “It's very difficult, very challenging, both in extremely high prices or low prices, to make margins and to make profit. Those profits do shrink if you want to hold onto the relationships [with customers] and endure the competition.”

Parker's company has increased prices of its flavorings twice over the last two years. It recently notified customers it had decided to use “scarce and valuable” vanilla beans toward production of more sustainable vanillas. It is urging the manufacturers to shift from pure vanilla extract to natural vanilla, a vanilla extract blend, as an alternative.

“We've got a really unsustainable problem here, as more and more countries are leaving agriculture, or they can grow other things,” he said.

McCormick, which has been selling vanilla for more than a century, has sourced beans through strategic partnerships in Madagascar for decades. The spice and flavorings maker is working to find alternate sources, with efforts to develop bean farming in different regions throughout the world and a pilot operation to grow its own vanilla beans. The company declined to offer details on those plans.

But, as Kurzius pointed out during an analysts' conference call Sept. 30, “those are efforts that will take a little bit of time to bring on-stream.”

PREVIOUS ARTICLE
Article 23 of 150
NEXT ARTICLE