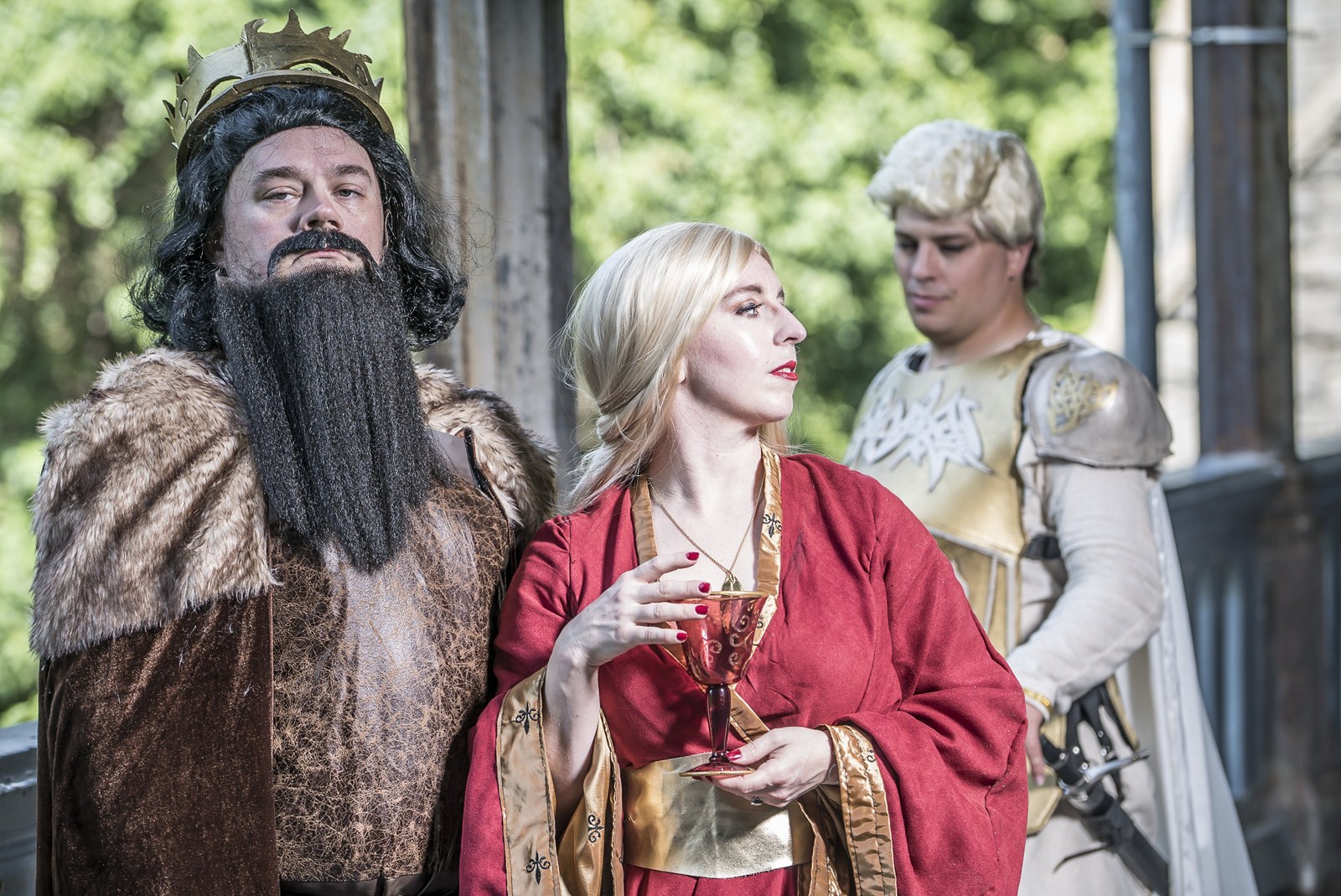 She made one fan, for sure — the series' author, George R.R. Martin, who was in the audience. Soon after, he invited La Blanc's tribute troupe — “Burlesque is Coming” — to perform at his theater in Santa Fe, N.M.

More than a year after the Santa Fe performance, “Burlesque is Coming“ producer and performer Moxie LaBouche still can't get over Martin's approval, calling it “the biggest nerd-cred I think a person could ask for in this day and age.”

“When I told the cast about it, one of our emcees almost fainted, and one of our performers threw herself to the floor and rolled around for a good 45 seconds,” LaBouche said on the phone from a Texas rest stop. “It meant a lot to us.”

Now in its third year of touring, “Burlesque is Coming” combines elements of strip-tease, comedy and sideshow performances, and filters it through the lens of “Game of Thrones,” the immensely popular fantasy-novel series that has become HBO's biggest still-running series.

LaBouche's show looks to spread the fun and artistry of burlesque by drawing the audience in with a story many already love, she said. LaBouche emphasized her show is not the first, nor likely the last, to use “Thrones” as a theme.

“We're not even the oldest one going,” said LaBouche, a Richmond, Va., resident in her 30s. “We just tripped and landed in butter when we got that endorsement.”

Famous co-sign aside, LaBouche and her core team of eight performers will perform the final “Burlesque is Coming” show ever on Sunday at the Ottobar. While “Game of Thrones” remains popular, LaBouche wants to end the tribute before it turns into a chore.

“We have to stop while we're doing it for the love,” LaBouche said. “If this turns into a job — which is not to say we don't take it professionally and seriously — but if it turns into a work-a-day thing for us, it would ruin ‘Game of Thrones' and burlesque for me.”

“We always describe burlesque to those who are unsure of what it is — particularly those whose only exposure to the word has been that Christina Aguilera movie — as a form of dance in which we take our costumes off in a clever or amusing way,” LaBouche said. “It makes a great date night. It makes a great girls' night out.”

LaBouche said last year's Ottobar show was a tour highlight (“People were just clamoring to be close to the stage,” she said). Those coming Sunday can expect a brand new show, including performer Baron Atomy, “who is quickly rising to be one of the pre-eminent boy-lesque dancers on the East Coast,” according to LaBouche. (Atomy’s roles include Oberyn Martell and the Mountain.)

Sunday's show lacks a connected overall narrative, but “Thrones” fans will recognize story arcs plucked from the original source, she said. Trying to tell a neat and tidy story can take away from the performances, LaBouche said. Her husband, Dante the Inferno, plays both Jaime Lannister and Jaqen H’gar. Co-founder La Blanc is also on double duty — as Jon Snow and Melisandre — while Ray Bullock, the host, takes on the roles of Robert Baratheon and Varys.

“It kind of goes in chronological order, but we're not super-duper hung up on having that exactly right,” she said. “It's really, really hard to get all of the acts to fit into the narrative exactly correctly.”

Still, it's key to her that the show entertains both the most hardcore fans and those who happily flip past the HBO series. They work in “Easter eggs” — subtle jokes only well-versed fans would recognize — while keeping in mind some in the audience lack the same conviction for the show they have.

When it came time for a test run, LaBouche knew whom to call — her mother.

“She's never seen or read ‘Game of Thrones,' nor would it suit her — she's an old-school, conservative Catholic,” LaBouche said. “If I can make a routine that she enjoys watching, but still has Easter eggs for the show-nerds and book-nerds, then we have succeeded."

While “Burlesque is Coming” will cease to exist after Sunday, LaBouche hopes the show will open up the expansive world of burlesque to the unfamiliar.

“We are very proud to be hundreds of people's first burlesque show,” LaBouche said. “I hope that in every city we pass through, we leave people saying, ‘Where can I find more of this burlesque stuff?'?”

PREVIOUS ARTICLE
Article 55 of 95
NEXT ARTICLE