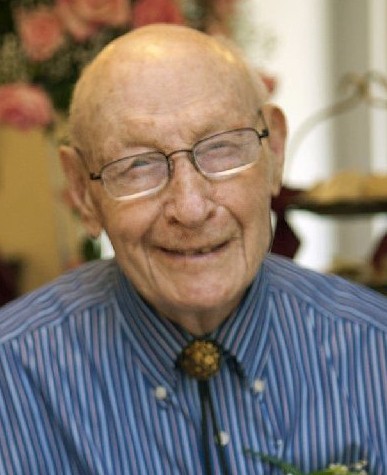 Dr. Sennott gave up golf at 104 but remained an advocate of a scotch before dinner,
PREVIOUS IMAGE

Dr. Waldron M. “Wally” Sennott, a retired radiologist who gave up golf when he was 104 but remained an advocate of a scotch before dinner, died March 3 of heart failure at the Pickersgill Retirement Community in West Towson.

He would have celebrated his 107th birthday March 31.

In January, Dr. Sennott and his wife of 78 years, the former Linda Adelaide “Addie” Stanley, who is also a centenarian, were featured in a Fortune Magazine article about the more than 72,000 centenarians living in America.

The son of Arthur K. Sennott, a salesman, and Ethel Farrow, a homemaker, Waldron Morton Sennott was born in Keene, N.H., and later moved with his family to Groton, Vt.

After World War I, the family moved to Torrington, Conn., where he graduated in 1928 from Torrington High School. It was toward the end of high school that Dr. Sennott decided to pursue a career in medicine.

“This objective would be daunting given the financial depression to come,” wrote his son, James Waldron Sennott of Sarasota, Fla., in a biography of his father. “Part-time jobs, scholarships and loans from dear friends would help him through college and medical school.”

During the summer of his sophomore year at Colgate University he worked at Camp Mohawk, where he met his future wife, who was a Girl Scout counselor there. They married in 1938.

“I was fortunate to work in the summer camp year after year. I saw a lot of girls,” Dr. Sennott told The Baltimore Sun in a 2014 interview. “Addie was the prettiest. She had very pretty auburn hair.”

He turned down a full scholarship to Duke Medical School and also Yale and Johns Hopkins medical schools. “I didn't want to leave my girl,” he told The Towson Times in 2013.

Instead, he entered Harvard Medical School and, between his second and third years, worked in sales for a pharmaceutical company.

During his last year at Harvard, he became interested in public health. After graduating in 1937, he began an internship with the U.S. Public Health Service at its hospital on Staten Island, N.Y.

In 1938, he received a reserve commission with the Coast Guard and was stationed in New York and Boston, and later aboard the Coast Guard cutter Cuyahoga in the North Atlantic as ship's doctor.

Discharged from the Coast Guard in 1941, Dr. Sennott began his radiology training at the USPHS hospital on Staten Island, and later at hospitals in New Orleans and Cleveland.

In 1942, he was called to Washington and participated in the large-scale tuberculosis screening of 120,000 federal employees.

Dr. Sennott was later named head of radiology at the USPHS hospital on Staten Island, and served there until 1958, when he was transferred to the service's Wyman Park Hospital.

He retired in 1965 from Wyman Park, then joined the radiology staff at the old Baltimore City Hospitals, now Johns Hopkins Bayview Medical Center.

He was also an assistant professor of radiology at the Johns Hopkins School of Medicine.

In 1972, he fully retired from his medical practice.

Family members said that during the summer of 1945, Dr. Sennott visited Martha's Vineyard, then the site of a small hospital that served Coast Guard members and merchant mariners.

“This began a lifelong summer pilgrimage for Wally and his family,” wrote his son.

“There were no other homes, no electricity and no roads in the immediate vicinity. Lumber was hauled in by ox cart,” his son wrote. For more than 60 years, Dr. Sennott and his wife spent summers with their children, grandchildren and great-grandchildren on Martha's Vineyard.

The couple lived in Hillendale for 53 years before moving to Pickersgill in 2011.

An avid golfer since his days at Colgate, Dr. Sennott continued golfing at Mount Pleasant and Pine Ridge courses until he turned 104.

“He doesn't hit it very far, but he hits it straight,” Jim Ridenour, Pine Ridge Senior Golf Club president, told The Towson Times in the 2013 article.

Dr. Sennott did not follow any special regimen or diet in order to gain centenarian status; he had said longevity simply ran in both families. His father died a week before his 100th birthday and his mother died in her 90s.

“He was always very active and did a lot of work around the house. He liked to garden,” said his son. “He was easygoing and the opposite of a Type A personality. He was never a frantic person and was always calm.”

Dr. Sennott was a history buff. He was especially interested in the American Colonial period, reading about it voraciously.

“He never smoked, and drank moderately. He liked a scotch or a beer before dinner,” his son said. “He liked his beer.”

He had been a member and deacon at Babcock Presbyterian Church in Towson.

A memorial service will be held at 10 a.m. Saturday at Pickersgill, 615 Chestnut Ave., Towson.

In addition to his wife and son, Dr. Sennott is survived by five grandchildren and two great-grandchildren. Another son, Roger Stanley Sennott, died in 2002.

PREVIOUS ARTICLE
Article 21 of 96
NEXT ARTICLE