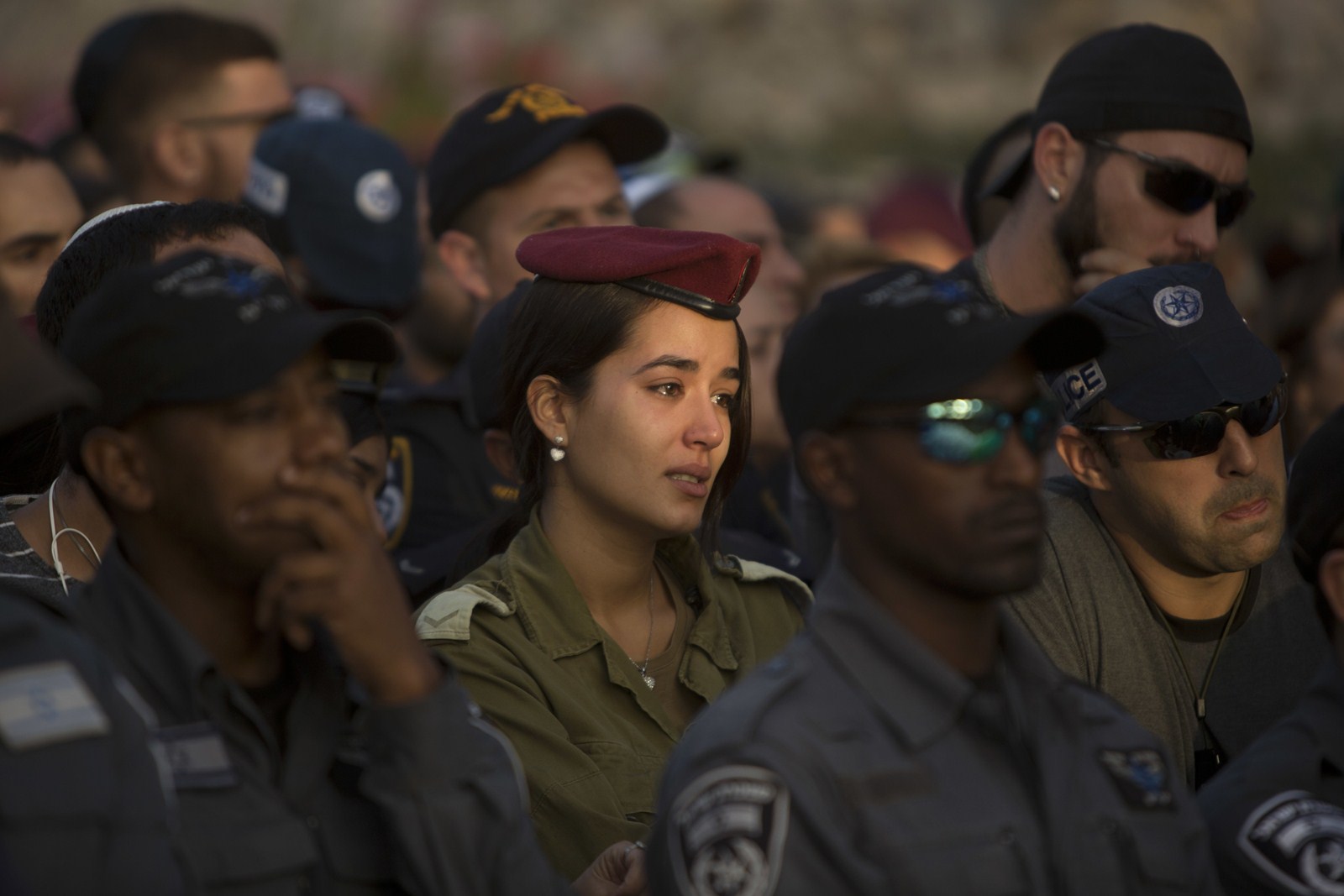 — A Palestinian motorist launched a shooting spree near the national headquarters of the Israeli police in Jerusalem on Sunday, killing two people and wounding five others before being shot dead after a frenzied chase through the streets of the holy city, Israeli police and emergency services said.

The daytime attack, carried out by a member of the Hamas militant group, was one of the bloodiest during a yearlong spate of Palestinian assaults. Israel had beefed up security in recent weeks, warning that violence could rise during the current Jewish high holiday season.

Police spokeswoman Luba Samri said the attacker sped toward a busy stop of the city's light rail and opened fire, hitting a 60-year-old woman. He continued driving and shot another woman who was seated in her car before speeding off toward an Arab neighborhood in east Jerusalem.

Samri said police officers on motorcycles chased the assailant, who eventually stepped out of his vehicle and opened fire at them. A separate police force shot and killed the attacker, Samri said.

Police identified one of the dead as a 29-year-old male police officer, Yosef Kirma. The 60-year-old woman also died.

Police said the shooter was a 39-year-old man from the east Jerusalem neighborhood of Silwan. They did not release his name.

Israeli media reported the man had previously served multiple sentences for violent acts and was due to report to prison Sunday for another sentence over assaulting a police officer.

Hamas stopped short of claiming responsibility for the attack. But in a statement, it identified the shooter as Musbah Abu Sbaih, an activist in the group.

— Mexican drug gang bosses furious at suspected turncoats sent commandos aided by local police to seize dozens — perhaps hundreds — of people, murder them and dispose of their bodies in a town near the Texas border, yet state and federal officials ignored the massacre for years, according to a government-backed report released Sunday.

The long delay in the investigation makes it impossible to determine just how many people were killed in the town of Allende over the weekend of March 18-20, 2011, according to the report sponsored by the federal Executive Commission for Attention to Victims.

But a Zeta drug gang member told a U.S. court in 2013 that 300 died, though it was not clear if all the deaths occurred in the same incident.

— German police searched nationwide Sunday for a 22-year-old Syrian man believed to have been preparing a bombing attack, who slipped through their fingers as they were closing in on him, and were questioning a second Syrian man on suspicion he was involved in the plot.

The man in custody was one of three apprehended in the eastern city of Chemnitz on Saturday. He was renting the apartment that police raided in their search for the main suspect, Jaber Albakr from the Damascus area of Syria, a Saxony police spokesman said. The other two men have been released, he said.

Police also confirmed reports that Albakr had come to Germany in the flood of 890,000 migrants who entered the country in 2015 and had been granted asylum.

— Kurdish militants detonated a car bomb Sunday outside a military checkpoint in southeast Turkey, killing 10 soldiers and eight civilians, the prime minister said. Turkey launched a military operation against the rebels in response.

Prime Minister Binali Yildirim gave the death toll during a news conference in Istanbul and condemned the attack in Hakkari province. Twenty-seven other people, included 11 soldiers, were wounded in the explosion, provincial and military officials said.

Turkey's state-run Anadolu Agency, citing the military, said the attack was the work of the Kurdistan Workers' Party, or PKK.

Officials said attackers first opened fire on the checkpoint before driving up a minivan containing about 5 tons of explosives and detonating it.

— A 12-car commuter train and a work train performing track maintenance were traveling in the same direction when they “side-swiped” each other, causing the commuter train to derail and injuring 33 people, four seriously, state officials said Sunday.

Gov. Andrew Cuomo said initial reviews of the Saturday night accident indicate the yellow maintenance train entered the clearance space of the eastbound commuter train, causing it to derail and leaving “a splatter of yellow paint where the first collision occurred.”

National Transportation Safety Board investigators were to determine what exactly caused the accident, Cuomo said.

The derailment came shortly after a commuter train in New Jersey crashed into a terminal, killing one person and injuring more than 100.

— A Pakistani militant linked to a number of high-profile attacks was killed in a joint Afghan-U.S. special forces operation in eastern Afghanistan, Afghan police officials and Taliban commanders said Sunday.

Ajmal, a leader of the banned al-Qaida-linked Pakistani sectarian group Lashkar-e-Jhangi, was wanted for major attacks, most notably one on the Sri Lankan cricket team in 2009 that killed six police officers and wounded seven players.

AT&T will stop exchanging Samsung Galaxy Note7 smartphones because of reports that some of the replacements are catching fire, just as the original devices did before they were recalled last month.

AT&T, a major seller of the phones, encouraged customers to exchange Note7s for other products.

PREVIOUS ARTICLE
Article 11 of 78
NEXT ARTICLE