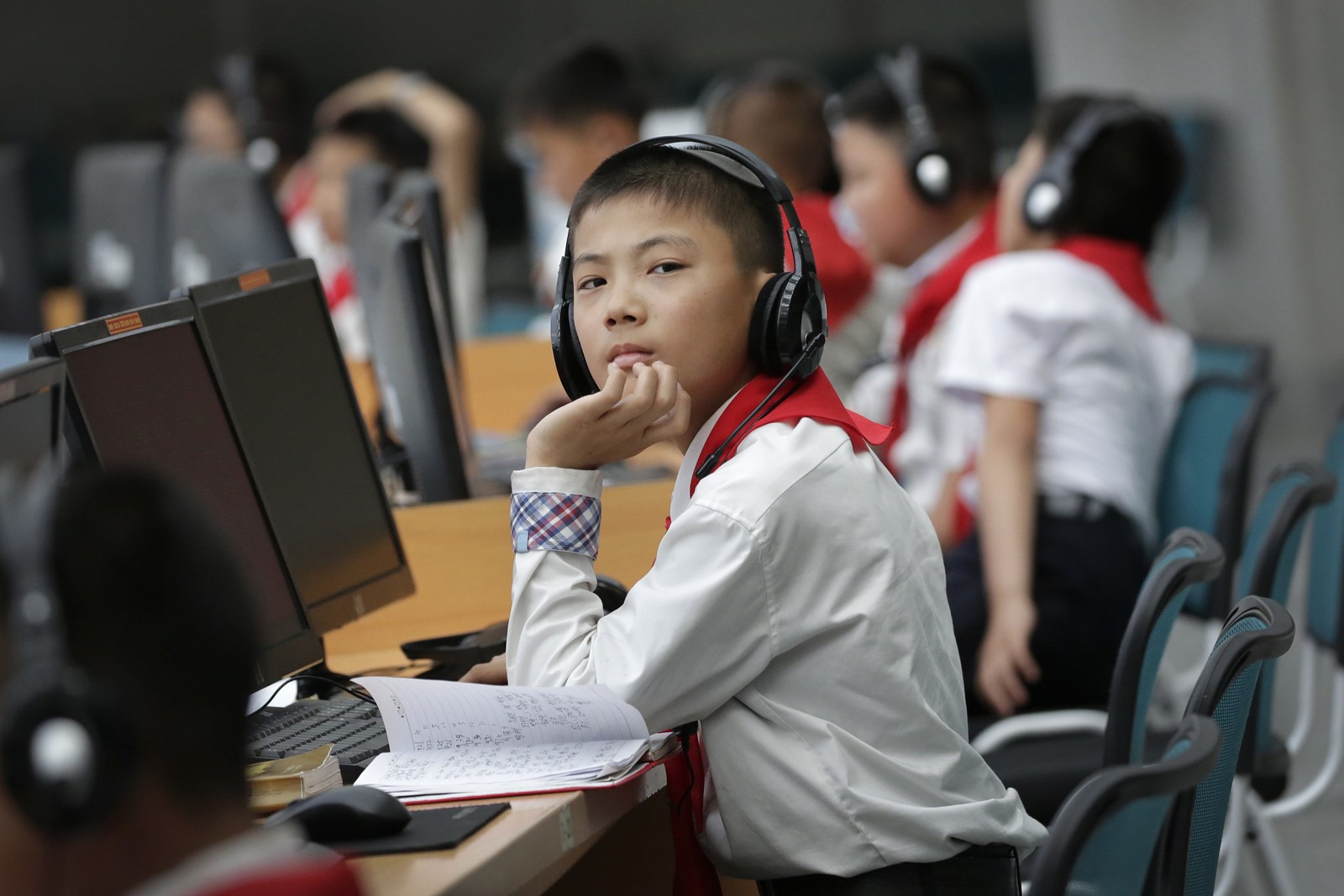 North Korean students use computers at the Sci-Tech Complex in Pyongyang, which are limited to the nation’s intranet. (Wong Maye-E/AP )
PREVIOUS IMAGE

— Ever so cautiously, North Korea is going online.

Doctors can consult via live video conferencing. People text each other on their smartphones. In the wallets of the privileged are cards for e-shopping and online banking. And this is all done on a tightly sealed intranet of the sort a medium-sized company might use for its employees.

With the possible exception of Eritrea, North Korea is still the least internet-friendly country on Earth. Access to the global internet for most is unimaginable, and hardly anyone has a personal computer or an email address that isn’t shared.

But for Kim Jong Un, the country’s first leader to come of age with the Internet, the idea of a more wired North Korea also comes with the potential for great benefits — and for new forms of social and political control. Pyongyang’s solution is a two-tiered system where the trusted elite can surf the Internet with relative freedom while the masses are kept inside the national intranet, painstakingly sealed off from the outside world, meticulously surveilled and built in no small part on pilfered software.

Unlike most North Koreans, Pak has some experience with the internet, though on a supervised, need-only basis. If Pak needs anything from the internet, accredited university officials will find it for him.

Today, he is relying on the internet’s North Korean alter ego, the national intranet, a unique way to exert control through not just blocking but complete separation.

Pak is on the walled-off network North Koreans call “Kwangmyong,” which means brightness or light. Using the “Naenara” browser — the name means “my country” but it’s a modified version of Firefox — Pak visits a restaurant page, his university website, and cooking and online shopping sites.

There are about 168 sites on Kwangmyong, an official said, spread across separate networks for government agencies, schools and libraries, and companies.

Like most North Korean computers, the desktops at the Sci-Tech Complex run on the “Red Star” operating system, which was developed from Linux open-source coding. Leaked versions of Red Star also reveal some rather sinister, and for most users invisible, features.

Any attempt to change its core functions or disable virus checkers results in an automatic reboot cycle. Files downloaded from USBs are watermarked so that authorities can identify and trace criminal or subversive activity. And a trace viewer takes regular screenshots of what is being displayed.

North Korea’s national intranet concept is unique and extreme even when compared with other information-wary countries.

China and Cuba, for example, are well known for the extent of control the government exerts over what citizens can see. But that is done primarily through censorship and blocking, not complete separation.

Nat Kretchun, deputy director of the Open Technology Fund, said the kinds of censorship and surveillance software in North Korea reveal a new information control strategy. Before, information was primarily controlled through a resource-intensive human network. But the advent of the internet poked holes in that strategy, so North Korean officials learned to adapt by using the online devices themselves as yet another tool for surveillance.

“In North Korea cellphones and intranet-enabled devices are on balance pro-surveillance and control,” said Kretchun, who has been studying North Korea’s relationship to the internet for years.

The most common online experience for North Koreans isn’t on a laptop or desktop. It’s on a smartphone.

A decade ago, only a small cadre of select regime and military officials had access to smartphones. Now, there are an estimated 2.5 million to 3 million mobile phones in North Korea, a country of 25 million. Mobile phone use has blossomed over the past five years with the introduction of 3G services, thanks in large part to two foreign investors — Loxley Pacific of Thailand and Egypt’s Orascom Telecom Media and Technology.

Like the walled-off intranet, North Korea’s phones deny access to the outside world. North Koreans can surf the domestic intranet or snap selfies, and have hundreds of ring tones to choose from. But they cannot receive or place calls to numbers outside that network — the rest of the world, in other words.

Foreigners in North Korea are relegated to a different network and cannot make calls to, or receive calls from, local numbers. They can buy local phones if they want, but the devices will be stripped of the apps and features that they normally carry and securely coded so that the apps can’t be added on later. Wi-Fi use is banned for North Koreans and tightly restricted and monitored to block surreptitious piggybacking on foreigners’ signals.

North Korea undoubtedly imports and rebrands some of its IT products. But over the past few months, two companies have generated quite a stir among Apple fans with products billed to be wholly domestic: the “Jindallae (Azalea) III” mobile phone and the “Ryonghung iPad.” The gadgets’ similarity to Apple products, and the flat-out appropriation of the “iPad” name, isn’t especially surprising, as Kim Jong Un is known to like Apple products.

It seems North Korean coders have also lifted some ideas from Apple.

Outside experts believe a program similar to what Apple uses in its OS X and iOS is the basis of the booby-trap that thwarts attempts to disable security functions in Red Star. It’s now a staple on North Korean phones.

And by 2014, all mobile phone operating systems had been updated to include the watermarking system to reject apps or media that don’t carry a government signature of approval. It’s the same mechanism Apple uses to block unauthorized applications from the App Store, but in North Korea’s case serves to control access to information.

As in all of North Korea, Kim Jong Un is ever present. So it’s perhaps fitting that one of the most popular apps is a role playing game based on a locally created hit anime series, called “Boy General.” It costs $1.80.

PREVIOUS ARTICLE
Article 29 of 82
NEXT ARTICLE