in math at Lakeland Elementary/Middle School, and scores are rising 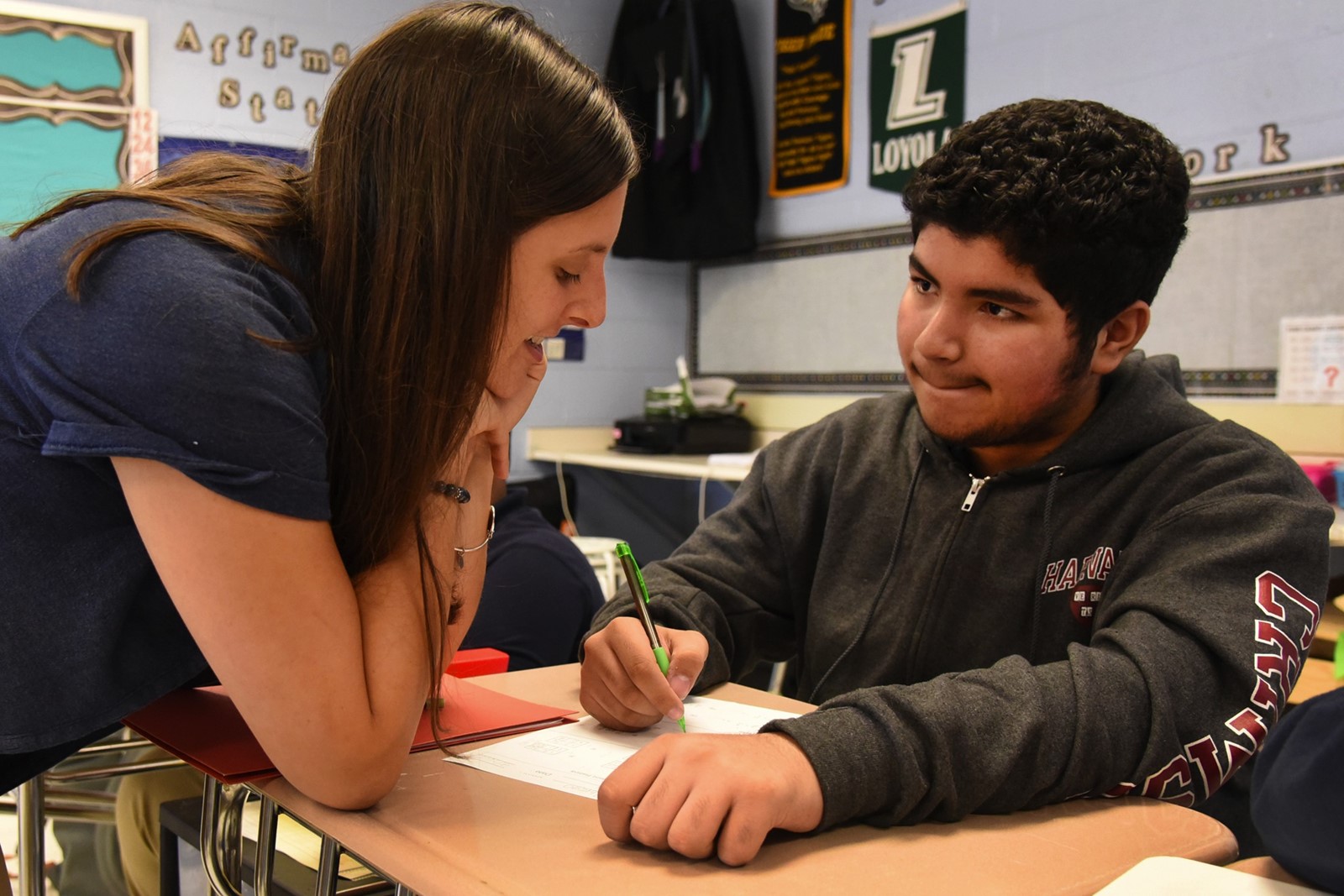 Lakeland Elementary/Middle School teacher Delilah Moss was shocked when a sixth-grade boy at the top of his class didn’t pass the math portion of an annual standardized test two years ago.

Ramon Resendiz was bright and engaged. He was eager to answer questions and always seemed to have his hand raised. But digging into his test data, Moss found that while he understood most of the math, he struggled with the reasoning aspect of thePartnership for Assessments of Career and College Readiness, or PARCC test.

Enter the math coaches from the University of Maryland, Baltimore County, a rotating cast of more than 20 UMBC students who are daily fixtures at the Southwest Baltimore school. The coaches, mostly undergraduates majoring in math, science, engineering and education, work with breakout groups of students who need an extra push to understand the material taught in their math classes.

This collaboration between Lakeland and UMBC contributed to schoolwide gains on the PARCC exam last year, school officials say. The next year, Ramon passed his PARCC math test — and more of his classmates did, too. The number of Lakeland seventh-graders scoring 4 or 5, which are considered passing marks, on the math exam shot up from 6.3 percent in 2016 to 17.8 percent last year. The percentage of fourth-grade students passing was even more encouraging. It more than doubled from 19 percent to just over 43 percent during the same period.

“It’s easier to learn with a small group,” said Ramon, 13, who’s now in eighth grade. “It helped me because we went over what I needed to focus on.”

Despite the students’ progress, the total percentage of Lakeland students passing the test remains low — 29 percent of elementary students and 14 percent of middle schoolers.

But last year’s growth at Lakeland — there wereschoolwide gains of about 7 percentage points in third- through eighth-grade math — builds momentum and will serve as the foundation for future improvement, said principal Najib Jammal. Baltimore as a whole saw a less than a 1 percentage point increase in those same categories.

Lakeland and UMBC began working together almost five years ago with the expressed intent of building a culture of science, technology, engineering and math — known as STEM — at the elementary/middle school. The partnership originally centered on connecting school families to after-school programs and other community resources.

“This is not your average partnership,” said math teacher Carly Harkins. “This is my 16th year teaching, and I’ve never seen anything where the schools are so connected in so many ways.”

The relationship goes beyond classroom coaching. Students are invited to tour the UMBC campus and visit science labs or attend a basketball game. The kids always come back impressed by the food, Principal Jammal says with a laugh. Lakeland also holds its eighth-grade graduation ceremony on the UMBC campus.

It’s all by design; the school wants to send the message that “this is where we should see you in a few years,” Jammal said.

But much of the partnership’s work now takes place on a low-key level, with college students sitting down in classrooms each day and going over math problems while decked out in UMBC gear. Their presence frees teachers to focus their attention on a few children at a time while the math coaches keep the rest of the class engaged and learning.

Lakeland teachers have analyzed their students’ test data, and they use the findings to sort the students into small groups alongside others who struggle with similar concepts.The math coachescan then dig in on the particular problem with which students in a specific group are struggling.As one student after another eventually masters a certain skill, the kids can turn to each other for help.

Freeman A. Hrabowski III, president of UMBC, takes an active role in the relationship with Lakeland. On a recent visit to the school, Hrabowski gravitated toward the students as they worked through math problems in small groups. He looked over a worksheet about exponents with a group of three boys. After a few minutes, Hrabowski said he could tell when a light bulb came on in one of the students’ minds.

The boy turned to the other two and started explaining the concept in Spanish. Hrabowski said that’s how he knew the boys really started to understand the idea behind the problem.

Forty-eight percent of Lakeland’s students are Hispanic. Of the 25 UMBC math coaches, at least five are Spanish speakers. The program specifically looks for such skills, said Josh Michael, assistant director of UMBC’s Sherman STEM Teacher Scholars program, which supplies many of the math coaches for Lakeland, though other UMBC students coach as well.

TheSherman scholars program’s mission is producing high-quality math and science teachers, and about 80 percent of the program’s alumni currently work in the field. The program specifically looks to produce students who are “culturally responsive and compassionate.”

Jasper Barnes volunteered as a math coach in Lakeland last year and came back there to teach full time after graduation. Even now, students refer to her as Coach Barnes.

The title promotes the idea that “if you work hard, you’ll get better, just like in sports,” Michael said. For Barnes, teaching anywhere other than Baltimore was never an option.

“I just really became dedicated to the students themselves,” Barnes said.

Jammal said Barnes’ connection to the community made her an ideal candidate. Just as he wants students from Lakeland to go on to UMBC, Jammal said, “we want students from UMBC to come here and be teachers.”

The partnership will soon have a physical mark on the Lakeland school. UMBC, along with aerospace and defense technology company Northrop Grumman, is building a state-of-the-art center at Lakeland focused on science, technology, engineering, arts and mathematics, known as the STEAM education grouping. The $1.6 million center, which will replace a vacant recreation center on the school grounds, will provide professional development for teachers and adult education services for neighborhood residents. It will have science labs, multipurpose spaces, and a digital video and sound studio, among other amenities. It is scheduled to open in January.

“Some of these children one day should be able to come to UMBC and then go on to work at Northrop Grumman,” Hrabowski said. “It’s almost like an ecosystem that goes all the way from early education through a career.”

PREVIOUS ARTICLE
Article 3 of 94
NEXT ARTICLE