Fixing the liquor board

The issue isn't who Gov. Hogan appointed to Baltimore's liquor board but the fact that he (and the state Senate) are involved in the first place 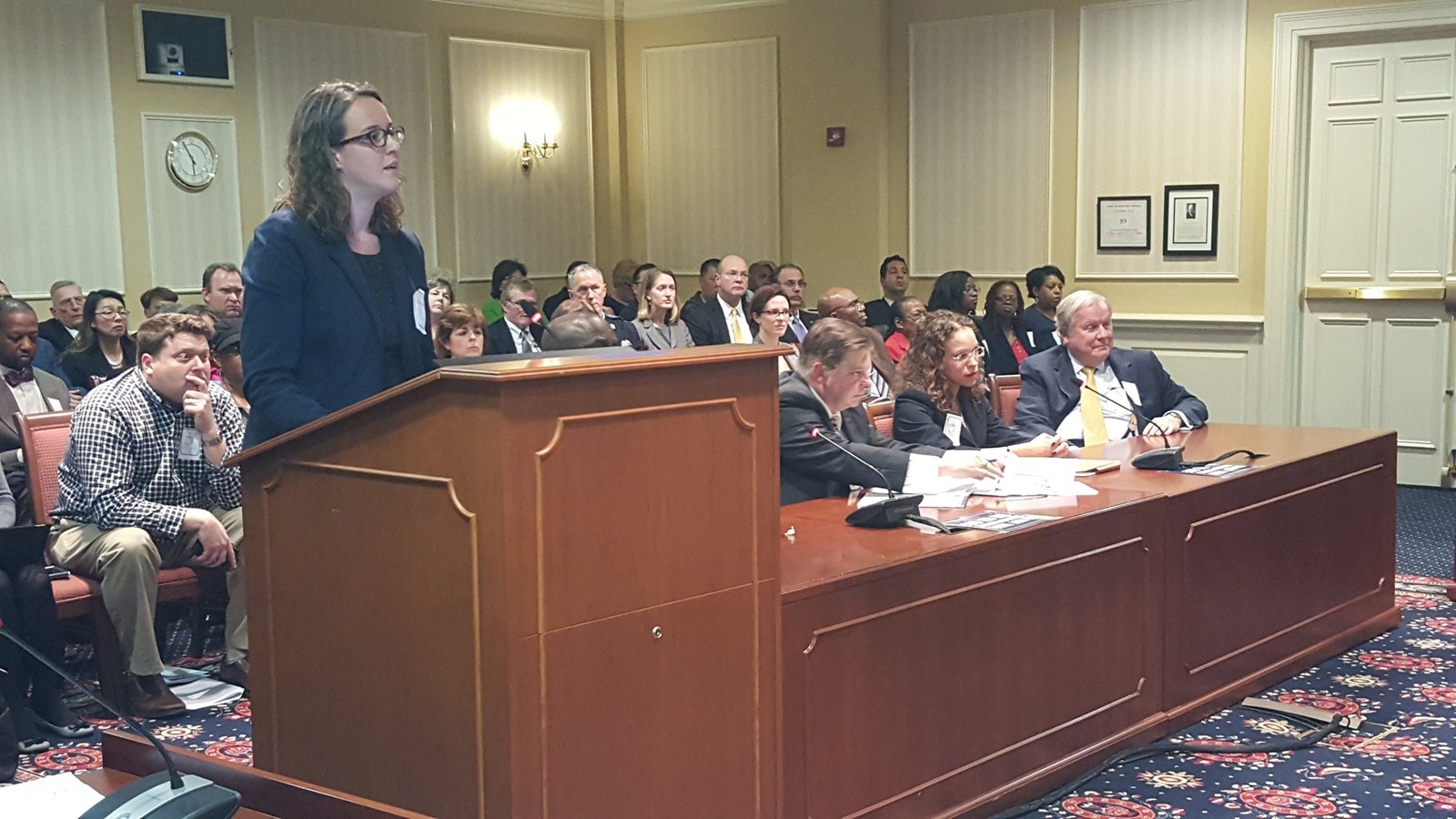 Becky Witt, an attorney at the Community Law Center and critic of the Baltimore liquor board, speaks at the confirmation hearing for its members. ( Sarah Meehan/Baltimore Sun )
PREVIOUS IMAGE

ov. Larry Hogan's controversial nominees to the Baltimore City liquor board got a rough reception from the Senate Executive Nominations Committee late last month, and the city's Senate delegation is now indicating that they likely will not vote to confirm them. Sen. Joan Carter Conway, who has long been influential in liquor board issues before the city delegation, is now to force Governor Hogan to nominate new commissioners before the General Assembly adjourns next month, and she is considering the idea of removing the body from the state's purview altogether and putting it under control of the mayor and City Council. We urge her to pursue the latter approach.

The Baltimore liquor board has been a mess for years. The after in 2013 to try to force reforms, and who died Sunday, began to make progress. When Governor Hogan took office, he brought in new appointees — as is to be expected — but they quickly raised the ire of community groups who accuse them of failing to follow the law and displaying a pro-liquor licensee bias.

When they appeared before the Executive Nominations Committee for their confirmation hearing on Feb. 29, the new appointees — Chairman Benjamin A. Neil and members Douglas H. Trotter and Elizabeth A. Hafey — made some important concessions to their critics by acknowledging their inexperience and admitting to mistakes. Most pertinently, Mr. Neil said several times that one of his first actions as chairman, handed down by the previous board to the Stadium Lounge in Waverly, had been an error that he regrets and has not repeated. The nominees said they have been in a way previous boards have not and that they are in the process of addressing the many still unresolved issues from the 2013 audit. That was all good to hear.

Their answers still left some legitimate concerns, though. Both Mr. Neil and Mr. Trotter passed blame for shortcomings in the board's procedures on their staff, and Mr. Trotter stated his view that the board has no responsibility for community complaints about people pouring out of troubled bars and littering or urinating on streets and alleys. Granted, what happens outside the bar is the purview of the police, but what happens inside the bar — for example, serving obviously drunk patrons in violation of the state liquor code — likely has a lot to do with it. (Ms. Hafey wisely said little during the hearing other than to point out that she had not yet been appointed to the board when the Stadium Lounge license was reinstated, nor when some of the other decisions community groups have complained about were made.)

The merits of these particular appointees, though, are less important than the broader question of why the governor and state Senate are involved in selecting the liquor board in the first place. For decades, these were coveted patronage jobs, with all the inefficiency and poor accountability that implies. The system fostered lax enforcement and cronyism. The legislature could adopt Senator Carter Conway's proposal to force Governor Hogan to make new appointments for confirmation in the next month, but what that really means is that Mr. Hogan would have to come up with new nominees favored by the city Senate delegation, and that just amounts to repeating what has failed in the past.

The real answer is to put the liquor board under mayoral control where it belongs — a position, incidentally, we also took when Martin O'Malley was governor ( Sept. 15, 2013). The city funds the liquor board, and it is the mayor and City Council who bear the brunt of complaints about how it is run. Liquor licenses are increasingly a policy concern in city government as officials view poor regulation as a threat to public health and safety.

On a practical level, the new commissioners seem as frustrated as anyone about the disconnect between the liquor board and City Hall. In last month, Mr. Neil complained that the city's information technology department had been slow to help with its modernization initiatives and that its reforms were hampered by a lack of funding. Mr. Trotter added at the hearing, “We get no support from the city except that they want to cut our budget.”

The truth is that no mayor is going to take real responsibility for the liquor board until he or she is responsible for picking its members. We urge Senator Carter Conway and her colleagues to look beyond the merits of these three appointees and solve the real problem by vesting control of the liquor board in the city where it belongs.

PREVIOUS ARTICLE
Article 26 of 83
NEXT ARTICLE