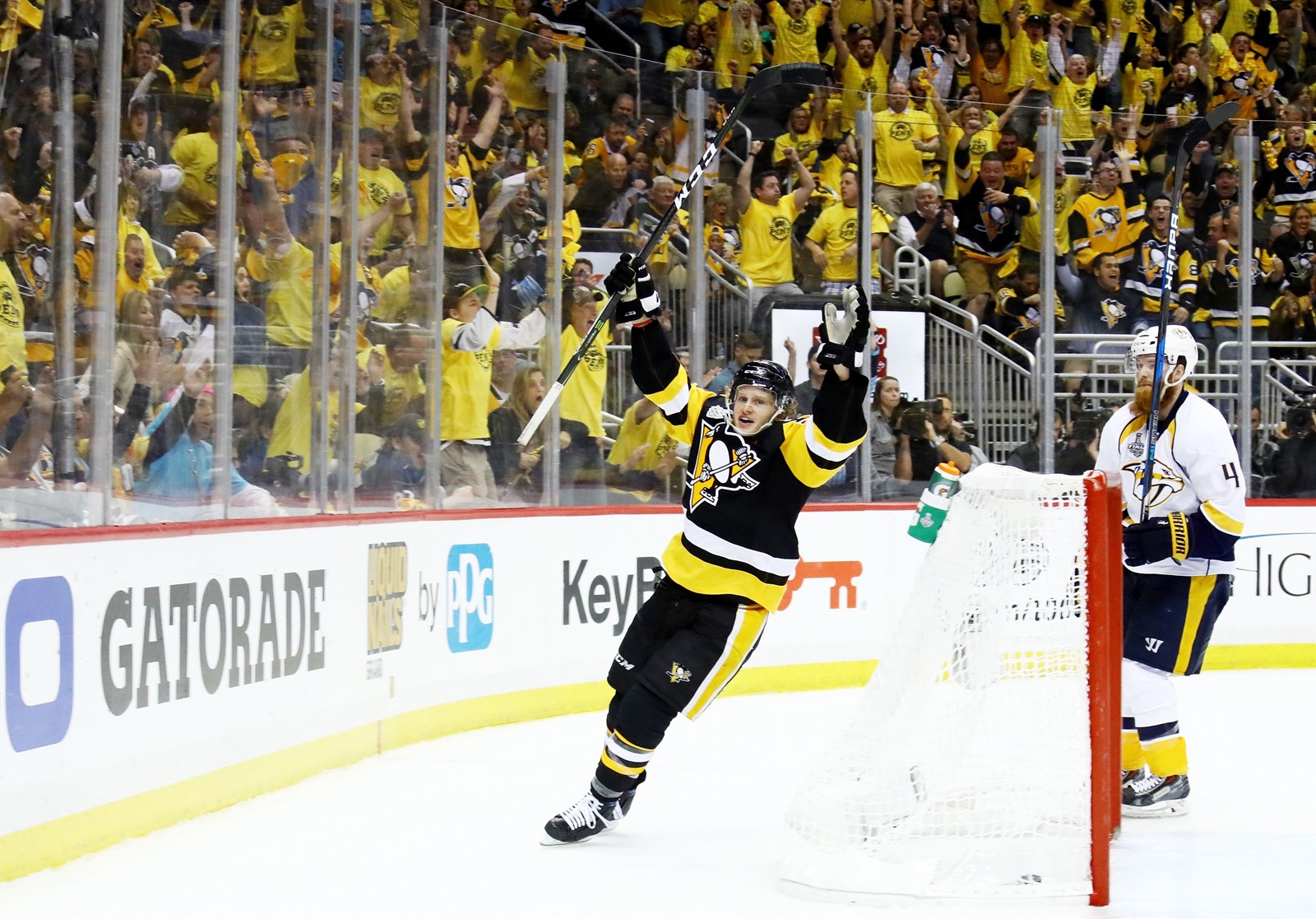 The Penguins’ Jake Guentzel celebrates after scoring in the third period. In the second period, the Predators became the first team to hold an opponent to no shots in a period of a Cup Final game since the NHL began tracking shots on goal in the 1957-58 season. (Bruce Bennett/Getty Images )
PREVIOUS IMAGE

Awakening from a slumber after going 37 minutes without taking a shot on goal, the Pittsburgh Penguins proved that they hadn’t forgotten how to shoot and score, after all.

Rookie Jake Guentzel broke a tie by scoring from the right side 16:43 into the third period, ending the Penguins’ bizarre offensive lull and launching them to a 5-3 victory over the Nashville Predators in Game 1 of the Stanley Cup Final.

Nick Bonino scored into an empty net with 62 seconds left in the third period to secure the victory for the Penguins, who are trying to become the first team to repeat as Stanley Cup champions since the Detroit Red Wings won consecutive titles in 1997 and 1998.

“None of us in our dressing room is fooled by the score tonight,” Pittsburgh coach Mike Sullivan said.

Game 2 will be played Wednesday at PPG Paints Arena.

The Penguins were not credited with a shot on goal in the second period, making the Predators the first team to hold an opponent to no shots in a period of a Cup Final game since the NHL began tracking shots on goal in the 1957-58 season.

“It's not textbook,” said Pittsburgh captain Sidney Crosby, who had two assists. “We've got some things we need to improve on.”

The Predators had won the opener in each of their first three playoff series, at Chicago, at St. Louis, and at Anaheim against the Ducks. On Monday they had some bad luck in the early going but also appeared unable to keep up with the Penguins’ speed and creativity.

The Predators appeared to have scored first, at 7:13 of the first period, when a shot by P.K. Subban from the top of the right circle got past Penguins goaltender Matt Murray. But the Penguins challenged the play on the basis that it was offside, and after a lengthy review their claim was upheld and the goal was waved off.

That seemed to awaken the Penguins. Gifted a five-on-three advantage when Calle Jarnkrok was called for interference and James Neal was penalized for crosschecking at 13:50, the Penguins took the lead on a shot by Evgeni Malkin from just above the right circle. His shot snaked over the left leg of Predators goaltender Pekka Rinne.

The Penguins doubled their lead to 2-0 on a beautiful passing play that was capped when Chris Kunitz, on the left side, found Conor Sheary on the right side, and with Rinne leaning the wrong way, Sheary had an open right side of the net to score his first goal of the playoffs.

That lead became 3-0 when Rinne stopped a shot by Bonino but couldn’t control the rebound, which caromed off the leg of Predators defenseman Mattias Ekholm and into the net at 19:43. Rinne began the finals with a sparkling .941 save percentage but that was severely dented by the Penguins’ scoring on three of the seven shots they got at him.

“I think at the end of the day we're up 1-0,” Bonino said. “We had a good first, we had a terrible second and we were terrible in the third. I don't think it's Xs and Os. We've got to work harder, compete a little harder, but we got some timely goals.”

The Predators trimmed the Penguins’ lead to 3-1 at 8:21 of the second period during a power play. Ryan Ellis used teammate Viktor Arvidsson as a screen for a long shot that got past Murray, and this time there was no reason to call it back. That meant it was the Predators’ first goal in the Stanley Cup Final.

Gathering momentum and confidence, the Predators continued to attack and cut the Penguins’ lead to 3-2 at 10:06 of the third period. A shot by defenseman Roman Josi hit Colton Sissons on the leg on the way to the net, while the Predators were on the power play, adding to fans’ anxiety.

Their worries were justified, as the Predators tied the game at 13:29 of the third period. Austin Watson won a battle for the puck behind the Pittsburgh net and fed the puck to an onrushing Frederick Gaudreau, whose quick shot eluded Murray and silenced the crowd.

PREVIOUS ARTICLE
Article 39 of 72
NEXT ARTICLE