such as racism and poverty in a ‘poetry slam’ 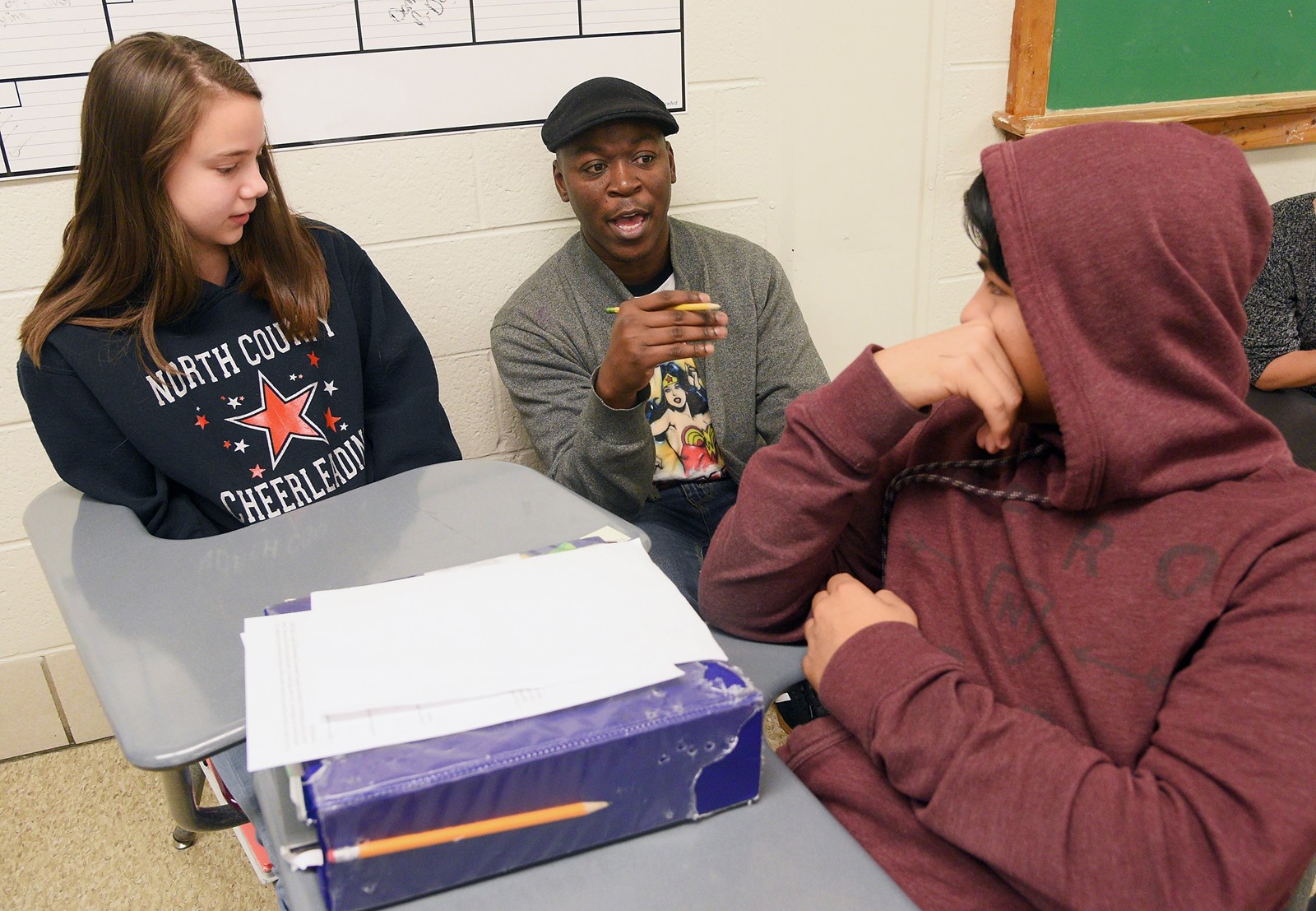 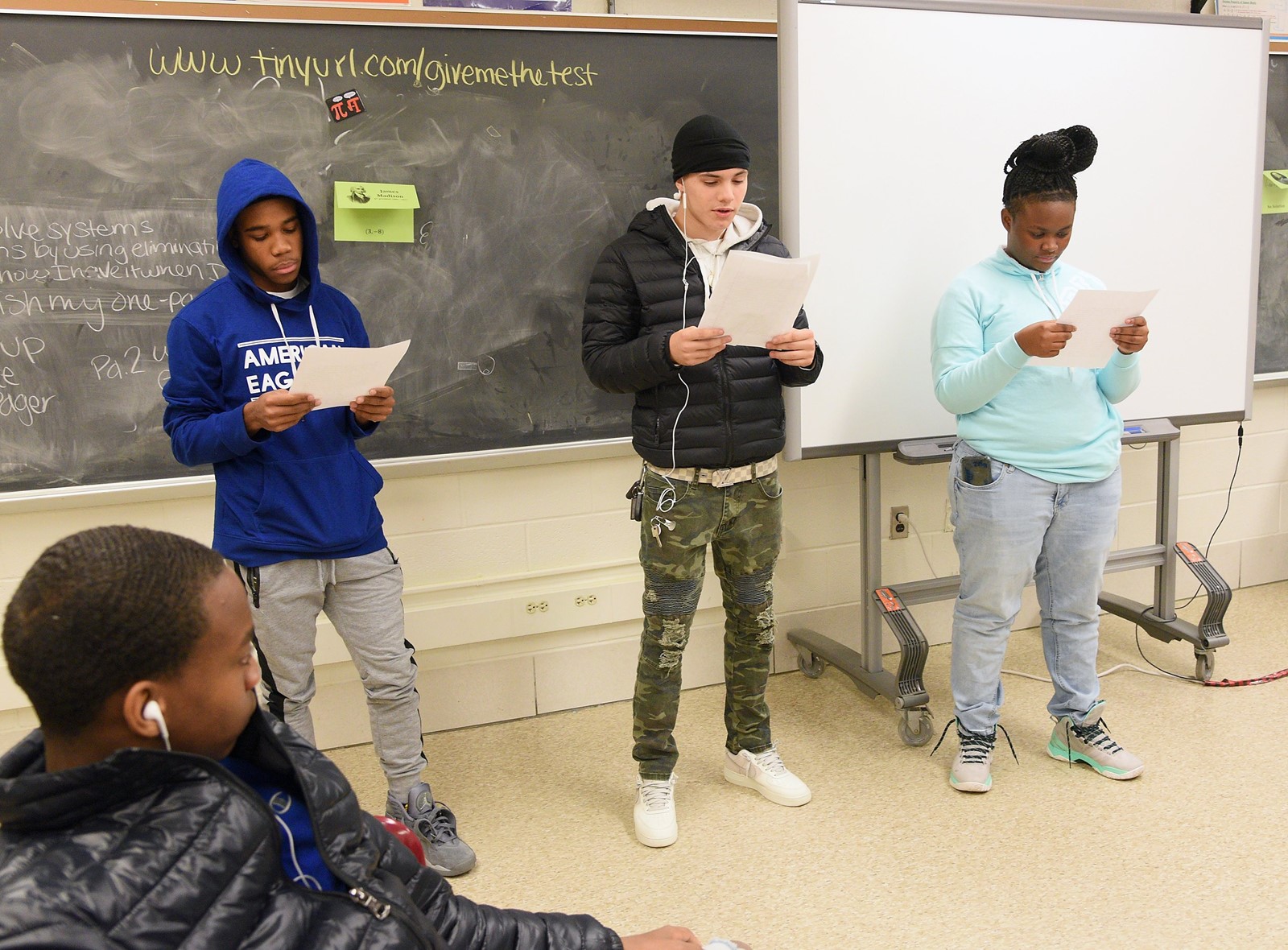 It’s not uncommon for ninth-grade Algebra 1 students to use terms such as “parallel,” “slope” and “solution” in their math work. But last week at North County High School, students used those terms and other math-oriented phrases to create poetry — some tackling issues from racism to poverty, police brutality to inequality.

The students performed their poems in a “poetry slam” event Monday in the school auditorium.

“When we come together we are the rate of change. Like parallel lines, some soulmates never meet. This domain where we stay contains so many variables. People continuously dealing with negativity,” one group wrote.

“I’m from the US. A country full of common difference. Racism, police brutality, inequality. Seems to be a line that’s continuous,” wrote another.

The exercise was led by a Baltimore spoken word artist named Femi Lawal — also known as Femi the DriFish — who spent a week in residence at the school coaching students through arts-in-education nonprofit Young Audiences.

The goal of the residency was to teach students math terms using poetry.

“So often mathematics is seen by people that either are in the field or outside of the field as nothing more than an algorithm, or... remedial computations, which is a false statement,” said school math chair Amy Goodman. “It’s important to expand the mindsets, not only of the teacher but the students, and the community we service.”

Math has its own language, Lawal said. “We’re putting a puzzle together in the form of a poem.”

During one of the classes, he implored the students to be creative, and bold.

“Don’t let that nervousness stop you from being great,” he told the class. “Get on stage and speak loud. Say it like you mean it.”

Groups of students in each of the six classes read their poems aloud, and then the class voted for which group would represent the class during Monday’s poetry slam. Lawal also gave them presentation tips — project, use body language, have enthusiasm and make eye contact.

In one of the classes, students Malik Beckles, Dominic Prahampap and Aniyah Hasty were chosen to perform.

“We from a country divided by three sides; High class, middle class, and low class,” Beckles read during Monday’s performance. “And we still have common differences. Some states, some cities, we have a lot of negative slopes. But we gain hope like Muhammad Ali, we hung on by a rope. So in relation our outputs are mostly negative.”

Goodman said she was impressed at the students’ ability to give dual meaning to the mathematics terms and relate them to their lives.

“They brought mathematics to life,” she said.

In September, Young Audiences of Maryland announced that a $90,000 grant from The National Endowment for the Arts has allowed them to expand arts initiatives in northern Anne Arundel. Lawal’s residency at North County was a part of that expansion.

The effort will involve all 12 public schools in northern Anne Arundel, according to Young Audiences. Each school will have a teaching artist in residence for 21 days, and the grant will also enable the creation of an after-school arts club at each school, professional development for teachers, field trips and training for local artists.

PREVIOUS ARTICLE
Article 81 of 158
NEXT ARTICLE