Under Armour reckons with backlash 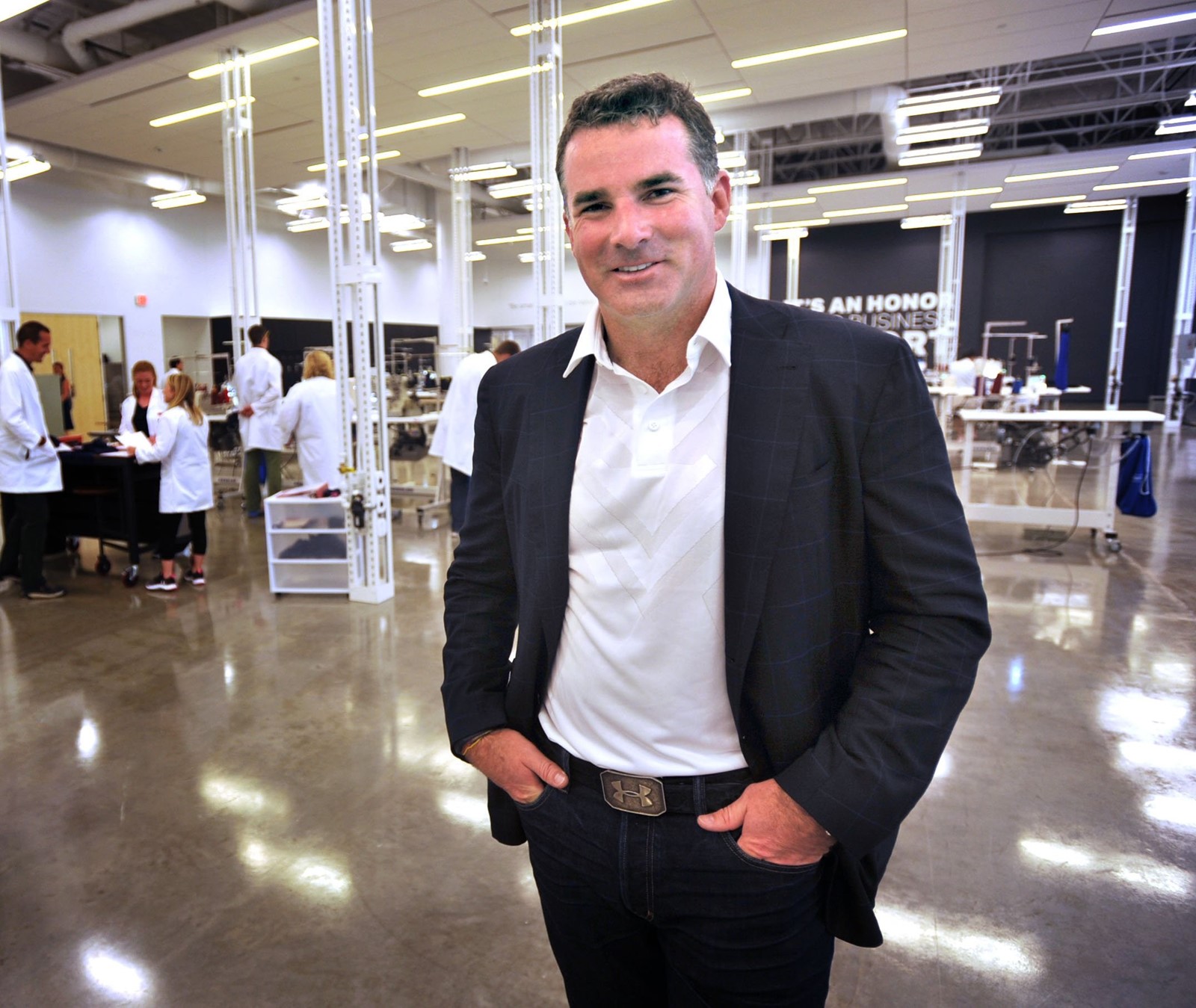 Under Armour says CEO Kevin Plank praised Donald Trump as a businessman, but did not endorse his policies.
PREVIOUS IMAGE

“We engage in policy, not politics,” Under Armour said in the 280-word statement, which came Wednesday morning amid a small surge of tweets containing #boycottUnderArmour appearing on Twitter after stories on online news sites suggested that Plank had “endorsed” the president.

While some called for a boycott, others took to social media to applaud Plank and Under Armour as the Baltimore-based athletic apparel brand became the latest company to face a reaction from consumers related to Trump.

Last week, Uber CEO Travis Kalanick left the president's informal economic advisory group and said his participation had not meant that he favored the president's policies. Earlier, L.L. Bean faced boycott calls after it was reported that a granddaughter of its founder contributed to a political action committee backing Trump.

Plank sits on a manufacturing advisory panel assembled by Trump that met with him the Monday after he was inaugurated. The panel, focused on developing innovative ways to support American manufacturing, includes top executives from Ford Motor Co., Dell Technologies and Johnson & Johnson.

Company CEOs are making calculated decisions about the risk of appearing to side for or against the president in a polarized political climate.

“Millennials and Generation Z want brands and retailers to be transparent about their stands on social issues,” said Matt Powell, an NPD Group vice president and apparel, sports and footwear analyst. “If those values don't align with their views, they will take their business elsewhere.”

Trump has not shied away from targeting companies himself on social media, including on Wednesday, when he tweeted that Nordstrom treated his daughter Ivanka Trump “unfairly” by dropping her clothing line, which the retailer called a business decision unrelated to politics.

Plank's comments on Trump came Tuesday afternoon as part of a broad interview on CNBC's “Halftime Report” about Under Armour. During the interview, Plank raised concerns about the possible “border tax” Trump has floated.

But Plank, who has contributed in the past both to Republican and Democratic elected officials in federal and state posts, said that having “such a pro-business president is something that's a real asset to this country.”

Trump, Plank told the network, “wants to build things. He wants to make bold decisions and be decisive. I'm a big fan of people that operate in the world of ‘publish and iterate' versus ‘think, think, think, think, think', so there's a lot that I respect there.”

Immediately after the interview aired, tweets with #boycottUnderArmour started to appear, citing Plank's comments. Within 24 hours, the hashtag had been tweeted a little more than 1,500 times, according to Keyhole, a hashtag tracker for Twitter.

That's a fraction of the nearly 140,000 #deleteUber tweets that appeared by 3 p.m. Jan. 29 after that social media campaign began the evening before, Keyhole data shows.

Still Under Armour sought Wednesday morning to mitigate any fallout by issuing its statement.

“We have engaged with both the prior and the current administrations in advocating on business issues that we believe are in the best interests of our consumers, teammates, and shareholders,” the statement said.

The company, the statement said, seeks fair trade, tax reform and an “inclusive immigration policy that welcomes the best and the brightest and those seeking opportunity in the great tradition of our country.”

Plank was out of town and unavailable to be interviewed on Wednesday, the company said.

It's not the first time Under Armour has found itself caught on the horns of a polarizing issue. Last summer, the company cut ties with a sponsored hunter whose husband had videoed himself spearing a baited bear in Canada.

While animal advocates deplored the hunt, many in the hunting community took issue with Under Armour's decision to no longer sponsor the hunter.

Politics may prove much more polarizing. Given the nation's divisions, it's risky for heads of companies to even appear to take sides in political or policy-related matters, marketing experts say.

“At no point in our history is it more important,” said Auburn Bell, an adjunct professor of marketing at Loyola University Maryland. “The country is incredibly divided in terms of thoughts and views on politicians and leadership. By taking a stance either way, you run the risk of alienating a major segment of your customers. That's only heightened in terms of importance as the country has become more divided in political views.”

Under Armour even faced a reaction from one of its top athletes.

NBA star Stephen Curry of the Golden State Warriors told The Mercury News of San Jose, Calif., on Wednesday that he spent Tuesday evening on the phone talking to Under Armour and eventually Plank himself “trying to understand what was going on and where everybody stood on the issue.”

Curry told the newspaper that he welcomed Under Armour's statement Wednesday, saying it represented the company he knows and stands with. But while Plank called Trump an “asset” to the country, Curry said: “I agree with that description, if you remove the ‘et'?” from “asset.”

Patterson Park resident Tyler Robbins, an Under Armour customer for more than a decade, took to Twitter to say he and his fiancee will no longer buy the brand after hearing what Plank had to say about the president.

“I've been a loyal customer and huge promoter of Under Armour,” said the 32-year-old mechanical engineer. But “I'm deeply concerned by Kevin Plank's comments. He is the CEO. He is the face of the company. If he supports a lot of the things Trump is trying to push through, his company will jump on changes Trump is trying to enact.”

But Under Armour also saw support.

Jeff Kennedy, a small business owner from Georgia, felt compelled to respond to the barrage of comments berating Plank, tweeting his appreciation of Plank's support of pro-business policies and vowing to buy more Under Armour stock and clothing.

Kennedy said he wanted to stand up for those business owners who are afraid to speak up and risk losing business.

A boycott made little sense, Kennedy added. “It goes back to freedom of speech,” he said. “Just because I might not agree with your side of the story, if you have a good product I'm going to keep buying it. I'm not going to stop using a good quality product just because they don't have the same views I have.”

The impact of such boycott calls are often hard to predict. Jason Moser, an analyst with the Motley Fool's Million Dollar Portfolio, said he found Plank's comments to be innocuous and acceptable. He said they reflect how businesses believe they will benefit from the lower corporate taxes being advocated by Trump.

“It's unfortunate that any positive commentary in today's political climate is perceived as ‘all or nothing' in support for or against any particular individual and his/her politics,” Moser said. “But Mr. Plank has a company to run, and it sounds like that's what he's doing so I'd encourage investors to focus more on the fundamentals of the business and less on short-lived events such as these.”

Under Armour framed its involvement with Trump as focused on the manufacturing initiative, which complements its effort launched in Baltimore last year to test technologies for local production.

“For years, Under Armour has had a long-term strategy for domestic manufacturing and we recently launched our first women's collection made in our hometown of Baltimore,” the company's statement said. “We are incredibly proud of this important first step in the evolution of creating more jobs at home.”

Loyola's Bell said Under Armour is handling the negative reaction in the best way possible. The company's statement aimed to frame Plank's comments as a response to his participation in the manufacturing jobs initiative, not as a personal endorsement, he said.

“When they realized there was some backlash — and that's not hard to do with social media, it appears quickly, they were quick to come out with a response,” Bell said. “It was something they needed to do, and time will tell as we move forward as to whether it succeeds.”

But it's likely the effect won't linger, he said. In many cases, he said, “it goes away, and there's not a longer-term impact on brands or companies.”

PREVIOUS ARTICLE
Article 3 of 90
NEXT ARTICLE