Farm is one stop along tour of studios 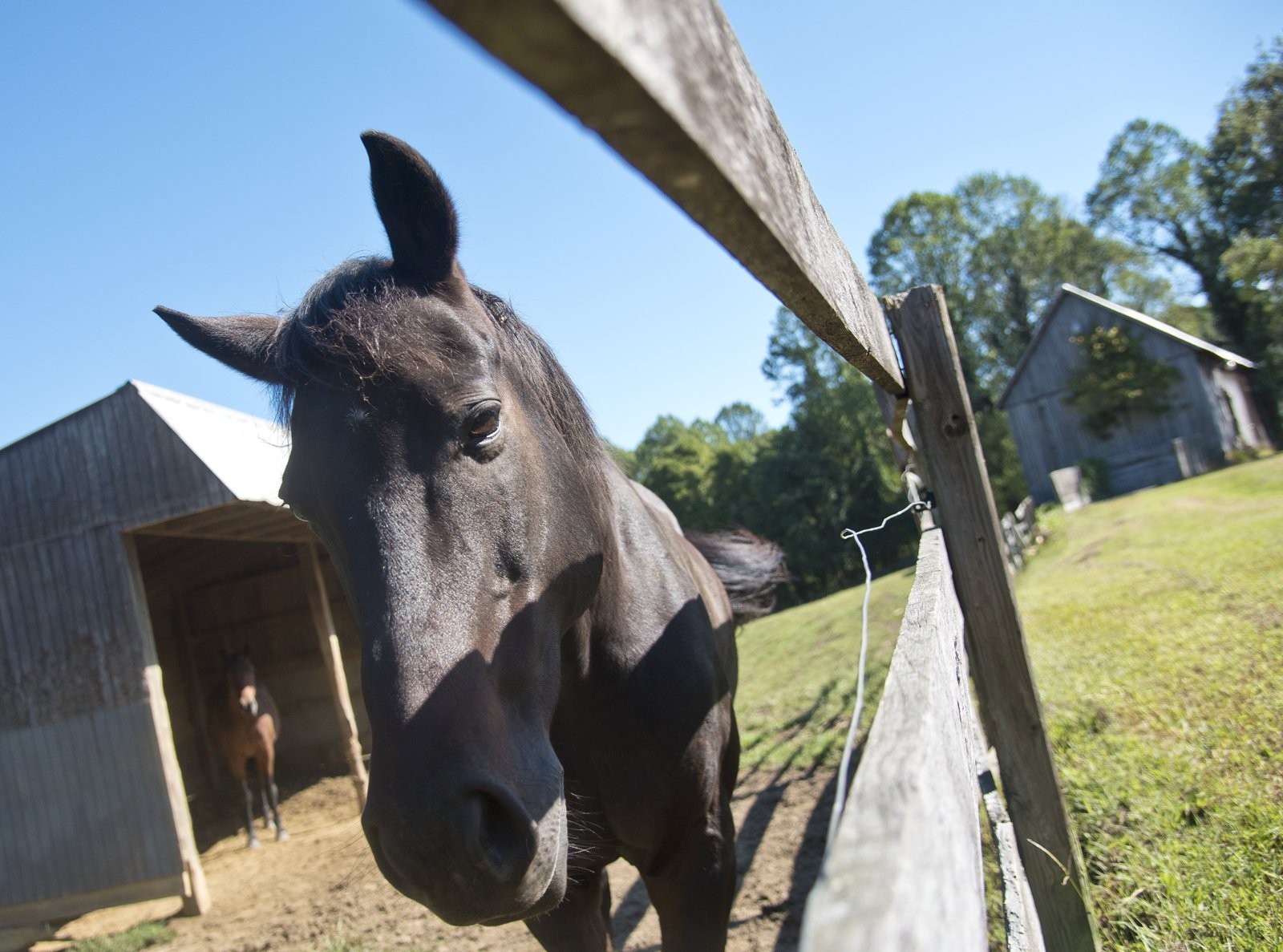 This is one of the six horses Michelle Guillermin keeps on her 20 acres in Dunkirk. She also keeps donkeys, a dozen or so chickens and six dogs. ( Joshua McKerrow/baltimore sun media group photos ) 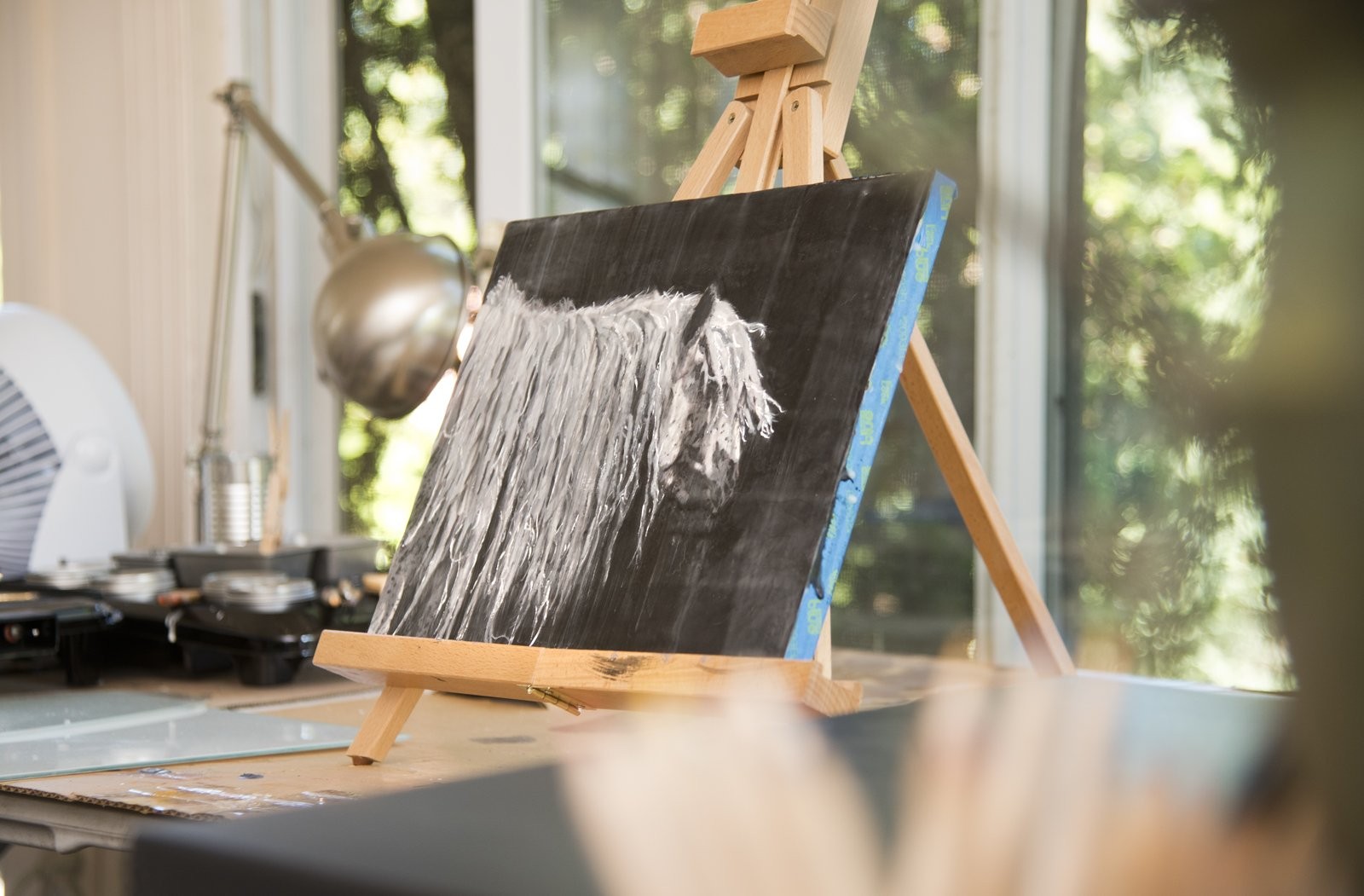 ichelle Guillermin has lived among the farmlands, rolling hills and woodlands of Dunkirk for 15 years. She loves it.

“I'm close to D.C., Annapolis and Baltimore,” she said. “But here, it's like the cities don't exist.”

That doesn't mean it's always quiet and peaceful. On her 20-acre property, Guillermin has six horses, donkeys, a dozen or so chickens and six very protective dogs, including yellow labs Khaki and Safari, French bulldogs Dax and Armand, and boxers Jack and Murphy.

In addition to the main, two-story farmhouse, which dates to at least 1920, there are two vintage tobacco barns, three sheds, plenty of grazing space for the horses and donkeys, a private riding ring and an L-shaped swimming pool with a diving board, which is surrounded by a patio.

Her farm straddles Anne Arundel and Calvert counties. Almost 12 acres are in Anne Arundel, and the remainder are in Calvert.

“The best part of this house is outdoors,” said Guillermin as she patted Kathmandu, one of her horses.

Guillermin is the founder and CEO of The Akili Group, a 6-year-old firm that provides back-office services on an outsourced basis. The company has clients and contractors all over the country. Akili, she said, is Swahili for “common sense.”

When not managing her business or traveling, Guillermin works at her art. A wildlife photographer, she now creates mixed-media artwork combining some of her photography with encaustic — or hot-wax — painting, fusing her strokes with a blowtorch.

She is a member of a collective of southern Anne Arundel County artists known as the Muddy Creek Artists Guild, and her studio overlooking the pool is one of 18 artists' workrooms that will be on display during the group's Open Studio Tour Oct.15-16.

Based out of River Gallery in Galesville, about 50 minutes south of Baltimore, the free tour includes studios there and in Churchton, Deale, Edgewater, Harwood, Shady Side, Tracys Landing and West River.

There are two front doors to Guillermin's house. Most visitors enter via a door close to the driveway. Around the other side of the four-bedroom, 21/2-bathroom residence is another entrance, beneath a shady overhang that runs the width of the original farmhouse.

The bases of two of the wooden columns supporting the porch are wreathed with greens from her garden.

A porch swing offers a restful place to enjoy the scenery.

Just inside this door is a combination living room and library. The focal point is an old hearth made of river stones found in the area. In this room, and throughout the house, Guillermin painted over the dark knotty-pine walls. She had library shelves built into the walls in one of the large room's corners.

A large chest with dozens of small drawers is lacquered in layers of burnt orange and black and covered with Korean lettering. It is an antique pharmacist's chest she found in South Korea.

In other rooms, there are pieces from dozens of countries. The artwork and furniture are accented by Guillermin's photographs of animals, including one of a giraffe that had just given birth to twins.

An Asian leather chest is used as a coffee table.

On the armrest of one living room couch, she's placed a saddle. On the mantel of the fireplace is one of her woodland finds: the skull of a raccoon.

En route to the sunny studio, formerly a four-season porch on one side of the house, visitors pass a mudroom. “Anyone who rides a horse will tell you you can't have a house without a mudroom,” she said.

On one wall of the mudroom is an assortment of bridles, reins, helmets and hats. Riding boots are lined up neatly in a corner. High on the wall is a John Wayne quote: “Courage is being scared to death, but saddling up anyway.”

Just outside the mudroom is a pergola she added to the house shortly after moving in.

The dining room is small, intimate and informal. The original dining room was not to Guillermin's liking, so she converted that space into a cozy den and furnished it with a pellet stove. A cherrywood table, bare save for a wooden bowl containing balls resembling skeins of wool, has a pair of wooden armchairs at either end.

Along one side are a pair of upholstered high-back chairs. A rustic couch is along the opposite side. All around are views of the outdoors.

The studio contains half-completed projects on tables and on easels. One waist-high table is set up to measure and cut mats for completed artworks. Cupcake tins are used as palettes. Strewn paintbrushes form intriguing patterns while waiting to be put to work.

The staircase is a work of art in itself with wooden scrollwork. On the first landing, there is an entrance to a suite of rooms. The staircase continues a few steps more to another level containing Guillermin's master suite and a bedroom that's been converted to a sun-filled office.

In Guillermin's room, a pair of ornate Oriental doors hang on one wall. They once adorned the entrance to a temple, she said.

“My house is broken up into lots of different rooms,” Guillermin said. “Each with its own look and personality.”

PREVIOUS ARTICLE
Article 111 of 196
NEXT ARTICLE