Food inspired by the Nordic nations is ubiquitous in the Big Apple. Here’s where to find it. 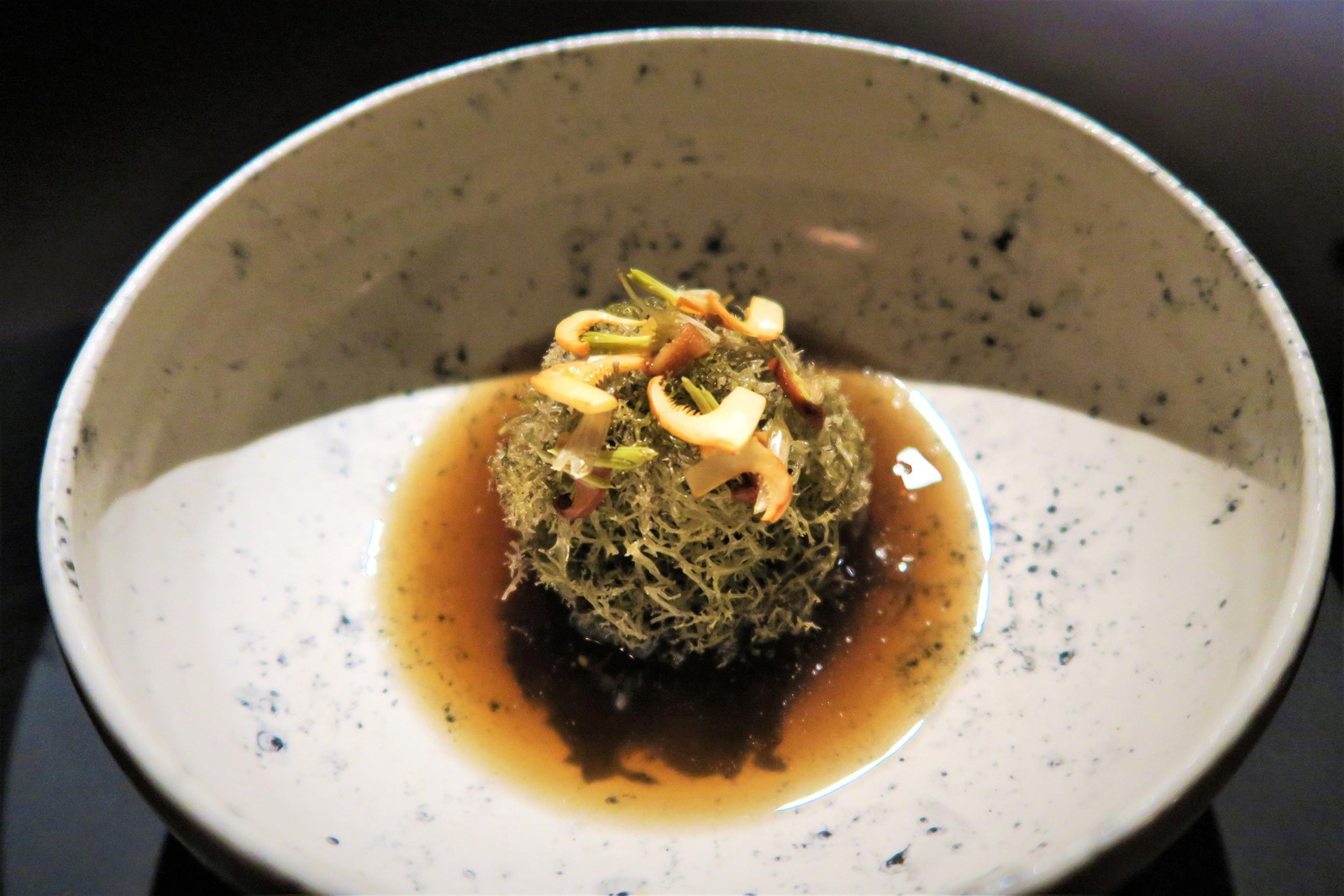 Chef Fredrick Berselius, owner of the Michelin-starred Aska in Brooklyn, prepares creative tasting menus in an open kitchen each night. (Liza Weisstuch/photos for The Washington Post) 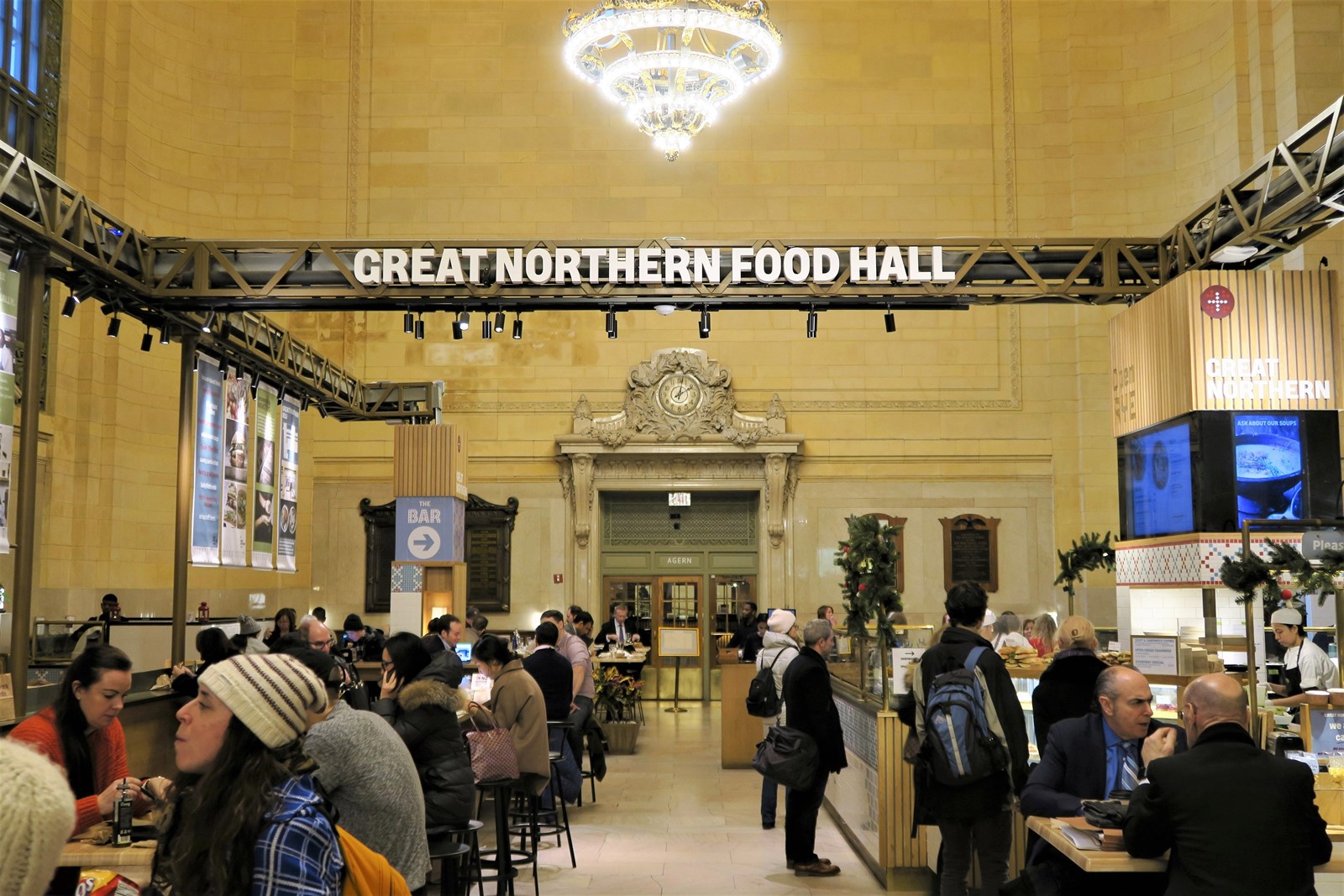 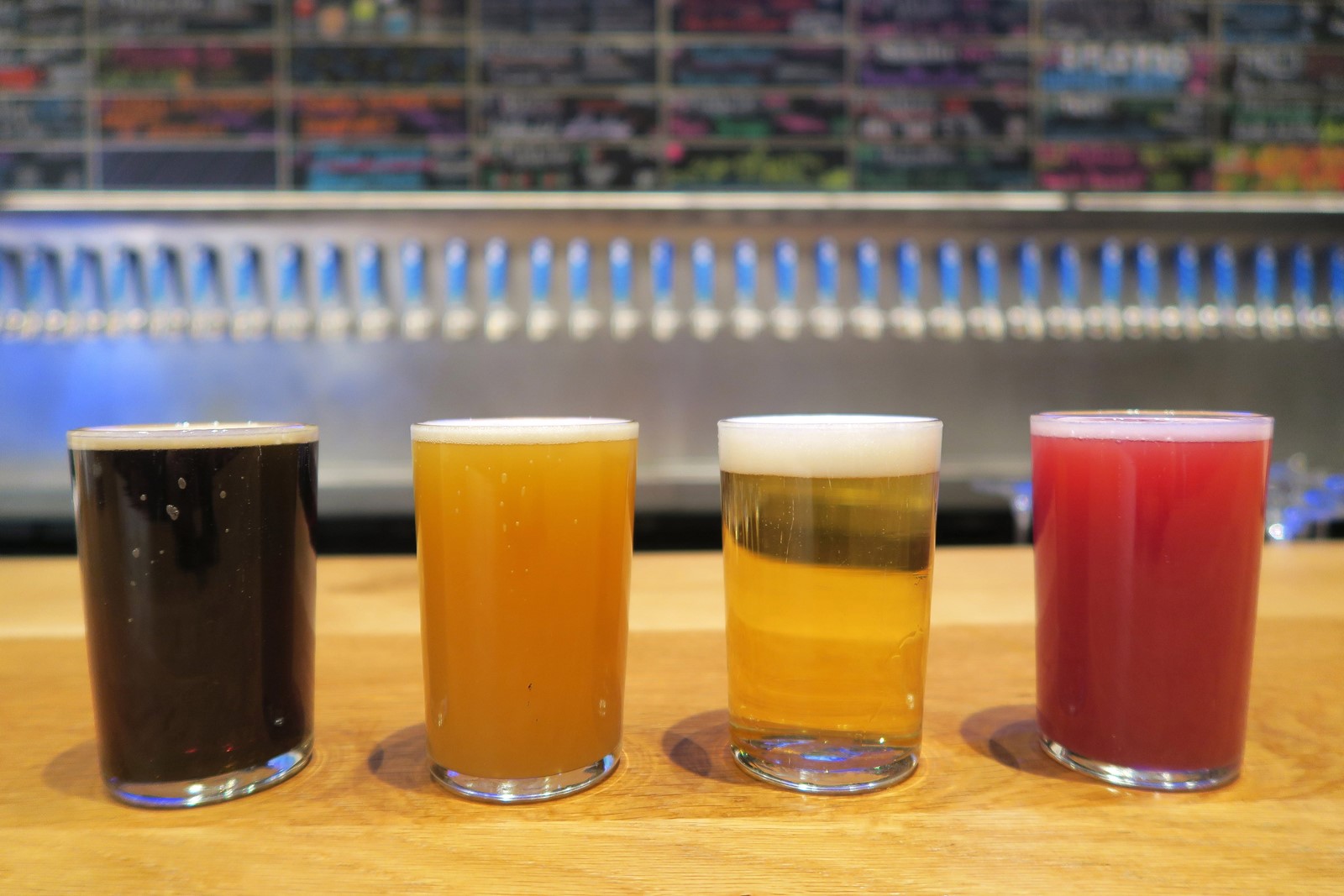 Mikkeller NYC, an outpost of the Denmark-based microbrewery, serves brews largely made on the premises. 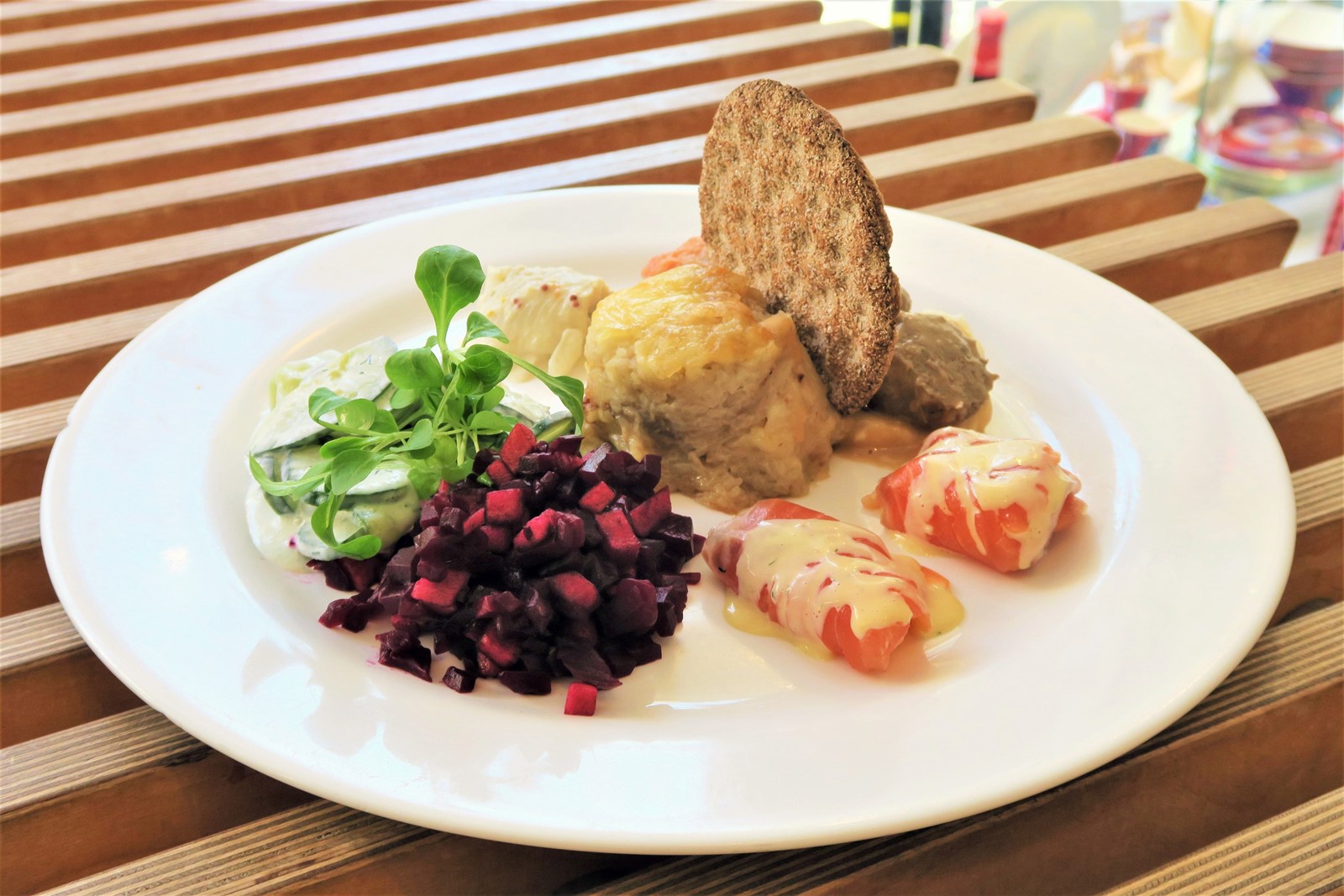 The classic smorgasbord, which includes spiced herring, Swedish meatballs, gravlax and other delicacies, is a popular choice at Smorgas Chef, the restaurant in Scandinavia House, a cultural center in Manhattan.
PREVIOUS IMAGE

It’s rush hour at Grand Central Terminal. Tens of thousands of commuters are frantically rushing to their trains so they can get home and relax.

In the southeast corner of the building, just off the main concourse, a tattooed couple sits at a high blond wooden table picking at a smorrebrod, or open-face sandwich, piled with celeriac, apple, lemon, daikon and dehydrated herb powder. A mother unfurls a kanelsnurrer (something like a braided cinnamon bun) and tears it into small pieces for her child. Two men in suits eat porridge.

All this takes place against the 105-year-old station’s celebrated architecture — majestic marble walls rimmed with ornate filigree. The smell of fresh bread baking in a hulking oven in the basement is discernible. The sound of the traffic blaring outside on East 42nd Street is not. A calm that’s unfamiliar to me as a New Yorker takes hold.

Great Northern Food Hall is a food-court-style space with shiny tiled surfaces and warm wood accents in its various “pavilions.” It was opened in 2016 by Claus Meyer, the Danish chef, entrepreneur, and activist who is best known for pioneering the New Nordic Food movement with chef Rene Redzepi, who trailblazed the ethos at Noma, the renowned Denmark restaurant they co-founded.

The food hall, which is attached to a high-end Scandinavian dining sanctuary, the Michelin-starred Agern, features a bakery, a “grain bar” and a bar with table service, a Danish hot-dog stall (outside in a hallway behind the main space) and more. It’s easily the most high-profile outpost for food inspired by the Nordic nations.

Many Scandinavian and Scandinavian-inspired chefs take their cues from the Manifesto for a New Nordic Cuisine, the defining text that Meyer penned with 11 other Nordic chefs. It lays out more philosophy than instruction. It’s thinking that’s rooted in landscape, be it local plants, wildlife, seasons or relationships with farmers and producers. It puts a premium on foraging, sustainability and mindful sourcing. And it has stirred much interest on these shores.

That doesn’t mean just restaurants, either. More and more brands of skyr, a high-protein, traditional Icelandic food similar to yogurt, have been appearing on supermarket shelves. Skyr maker Icelandic Provisions launched here in 2016 and distinguishes itself by using actual cultures from Iceland.

As the rush hour glided by, I sat at the bar, a chill oasis in the hall’s back corner, and ordered a Sizzle Sesh, a zingy American IPA from Mikkeller, a Copenhagen-based brewery known for its fiercely creative brews. Today, there are 42 Mikkeller bars around the world, several of which brew in-house. The newest, with a brewery on the premises, opened this past March at Citi Field, home of the New York Mets. (It operates year-round; the entrance is on the stadium’s exterior.)

My interest piqued by the Sizzle Sesh, which gets its zip from Szechuan peppers, I hopped on the 7 train at Grand Central — which runs east to Flushing — to check it out. Thirty minutes later, I walked across Citi Field’s vast parking lot into a Scandinavian retreat.

The space is sprawling and has all the hallmarks of classic Scandinavian design: blond wood tables with crisp edges, pops of color against monochrome backgrounds, jaunty logos. Brewing equipment is set up behind a half-wall along the side of the space.

There are 60 taps, and while many beers are made on the premises, others come from Mikkeller breweries in Copenhagen or the American sister brewery in San Diego. Some are collaborations with other independent brewers. Most are limited editions. The bartender poured me a flight and talked me through the samples: Berry Maniflow, a tart and sweet blackberry and black currant Berliner-style Weiss; Sanity Check, a hoppy and fruity Imperial IPA; Say Hey Sally, a delicately hoppy, easy-drinking Pilsener that is a flagship brew; and Mikkeller’s seminal Beer Geek Breakfast, a heavy stout made with cocoa and coffee and aged in bourbon barrels.

The new Scandinavian outposts join some older ones: Aquavit, a handsome shrine to Swedish cooking that opened in 1987 and moved to a more refined location in Midtown Manhattan in 2005, remains a Michelin-starred destination. A once little-known chef named Marcus Samuelsson, who grew up in Sweden, manned the kitchen before going on to build his own culinary empire.

Under his watch, preparations were more austere than the current playful approach that is the signature of Emma Bengtsson, a Swede who became executive chef in 2014. The former pastry chef brings sweet accents to traditional dishes (see: Swedish meatballs with lingonberries and cream sauce), blending New Nordic ideas and vintage Viking brawn. The eponymous aquavit, a traditional Scandinavian schnapps largely flavored with caraway and other bold, savory flavors, is made in-house.

“I wanted to put Scandinavian food on the map. Americans were so fascinated by other cuisines,” Swedish owner Hakan Swahn told me, recounting how, 30 years ago, New Yorkers flocked to the new restaurant.

What feels new for Scandinavian food, however, is its ubiquity, which keeps expanding. The first Ole & Steen in the United States, in Manhattan’s bustling Union Square, will open in early 2019. The Copenhagen-based bakery, which famously uses a 150-year-old starter in its sourdough, has 86 stores in Denmark and 10 in Britain.

On a recent chilly Tuesday evening, I made my way to Norman in Williamsburg, Brooklyn. The airy bakery-cafe-bar-restaurant is all white surfaces and natural light. I opted for a seat at the bar by the open kitchen. I dug into a crusty, personal-size sourdough loaf served with clarified butter, a fine precursor to the delicately flavored cured fluke with turnips and sorrel.

But those flavors were merely a primer for the next night’s visit to Aska, a Michelin-starred destination in Brooklyn under the Williamsburg Bridge. It’s owned and run by Fredrik Berselius, who grew up foraging and fishing in Sweden. The dining room, anchored by an open kitchen, is dark and theatrical (though a cellar bar is more casual and lighthearted). Many dishes are served on rustic wood bowls or boards. The food is refined yet user-friendly. And exquisite. Among the dishes I sampled was a stunning arrangement of vendace roe (a salmon relative) served with two types of roasted cabbage, a jam made with dulse, rhubarb root oil, and a sauce of fermented white asparagus juice and whey. Eating the uncommonly tiny roe was like crunching on fossilized champagne bubbles.

If Aska provides food that’s like a Mozart piano concerto — crystalline and delicate at the outset, then building to an orchestral swirl of flavors — then Smorgas Chef is classic rock — tried, true, familiar and comforting. Located on the ground floor of Scandinavia House, a cultural center four blocks south of Grand Central, the restaurant, an airy space anchored by a real tree, features an open kitchen that turns out housemade gravlax, dill cucumbers, all manner of herring and much more.

Norwegian expat and executive chef Morten Sohlberg opened the restaurant here 10 years ago. And while the New Nordic Food philosophy has proliferated, he has held steady with the kind of earthy flavors that evoke a history of hearty people. Beyond the kitchen, Smorgas Chef embraces a sensibility that’s as important to New Nordic as it is to old-world traditions: the restaurant sources food from two farms it owns in the Catskills that raise beef cattle, heritage pigs and all sorts of vegetables.

“New Nordic takes fine dining to an art form,” he told me. “We do more comfort food, we’re not obliged to follow that. Our food has to be clean, clear, vibrant but doesn’t have to be a work of art.”

Thing is, though: With its gorgeous arrangements and melodious flavors, its artistry is undeniable.

PREVIOUS ARTICLE
Article 122 of 156
NEXT ARTICLE