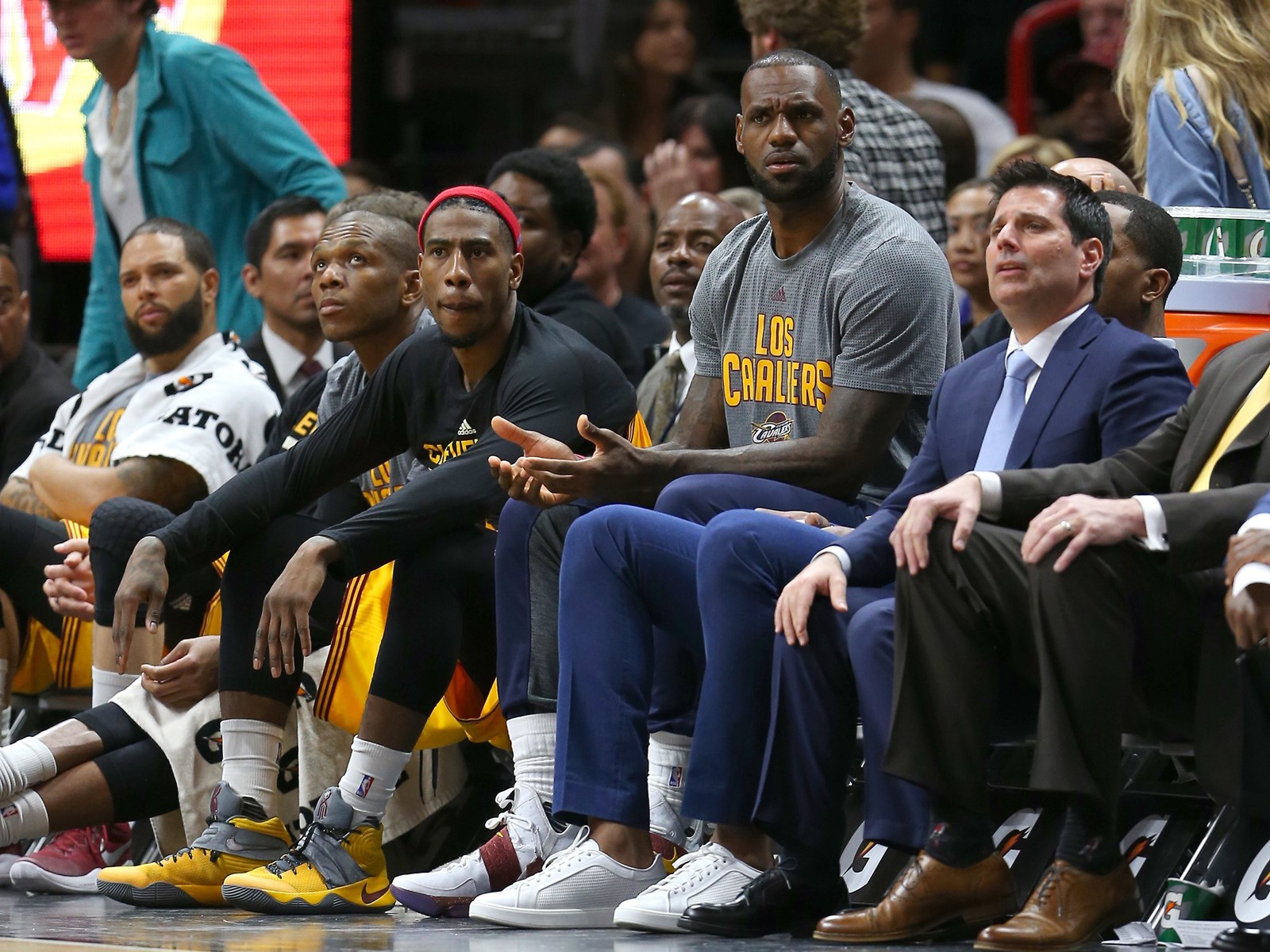 Cavaliers star LeBron James, with hands turned up, watches from the bench during a March 4 game in Miami. Later in the month, during a primetime game against the Clippers, the Cavaliers sat James for rest and Kyrie Irving and Kevin Love for health reasons. (David Santiago/TNS )
PREVIOUS IMAGE

In bulldozing their respective conferences through the first three rounds of the postseason, the Cleveland Cavaliers and Golden State Warriors each earned an extended rest before their highly anticipated showdown in the NBA Finals begins Thursday.

Both teams appear to be playing their best basketball at the most important time. One of the reasons cited is the strategic rest days given to star players sporadically through the long regular season.

Known in the league as “DNP-Rest,” the practice of sitting healthy players to avoid injury and fatigue has grown in popularity as teams focus more on reducing the wear and tear on the stars that drive the league. And while forward-thinking teams have been praised for putting the player first, there is concern across the league that the approach threatens to alienate fans who pay to see their favorite players, aggravate network executives who paid billions to showcase games and devalue the regular season.

“We don’t rest. I don’t believe in it,” Miami Heat president Pat Riley said in April. “I think it’s gotten to the point where it’s become a travesty, an absolute travesty. Blatantly. I don’t care how many players you’re resting or who. Who are the ones entitled to get the rest versus who doesn’t rest? We don’t rest.”

Riley had reason to be upset. After an 11-30 start to the season, the Heat rebounded to win 30 of their last 41 games to surge back into playoff contention. Heading into the final day of the season, the Heat needed a win over the Washington Wizards and a Chicago Bulls loss to the Brooklyn Nets or an Indiana Pacers loss to the Atlanta Hawks to get into the Eastern Conference field as the eighth seed. But the Nets sat Jeremy Lin, Trevor Booker and Brook Lopez, essentially handing the game to the Bulls.

During the regular season, there were 203 instances of a healthy player sitting out of a game, according to data compiled by instreetclothes.com, a website run by certified athletic trainer Jeff Stotts that has analyzed injuries for years. Ten years ago, there were only 12 such instances.

“It’s not my preference to rest. I do understand rest and why you do it,” said Kevin Garnett, who missed one game or none in nine of his first 10 seasons, though he needed to incorporate rest days more often later in his career. “It’s the way of the league, and I think the prestige of playing 82 is not what it’s used to be, and this is the way it’s going to be.”

And it’s not just star players on teams trying to preserve themselves for deep playoff runs that are getting the treatment. The Phoenix Suns sat Eric Bledsoe for the final 14 games of the season, while Tyson Chandler did not play after the All-Star break. The Los Angeles Lakers shut down Timofey Mozgov and Luol Deng for the final 15 games while trying to hold on to their lottery pick, and the Nets might have had the biggest head-scratcher by not playing three key players despite the importance of the game’s outcome.

“Personally I think it is a legit concern,” said Minnesota Timberwolves owner Glen Taylor, chairman of the NBA’s board of governors. “I look at it as an owner for my fans. Fans come and certainly they want our team to win. But they like to beat the star on the other team. They like to see them out there. They like to see a competitive game. So first of all my concern is for my fans that we play as many players as we can, that we play to win.”

Taylor said there were also concerns after the league started a 10-year, $24?billion television deal with Turner and ABC/ESPN. Several nationally televised games were diluted because of key players resting. It reached a crescendo over consecutive Saturdays in March when the Cavaliers and Warriors sat stars for ESPN games.

Commissioner Adam Silver sent a letter to all 30 owners imploring them to take a more active role in the decision-making process, saying it can “damage the perception of our game.”

But the strategy paid off, particularly for the Warriors, who won 14 straight to sew up the No. 1 seed in the West after a loss against San Antonio when Stephen Curry, Klay Thompson and Draymond Green sat out.

And according to instreetclothes.com, total games missed due to injury or illness declined for the third straight season to 4,198, the lowest number since the league did away with injured reserve for the 2005-06 season. Riley’s Heat led the league in games missed to injury, a number inflated by Chris Bosh missing all 82 with a blood clot problem.

The increase in rest games seems directly correlated to the 2013-14 season, when the league lost nearly 5,000 games to injury or illness. Teams rested healthy players for 46 games that year, but it spiked to 86 the following season and 146 in 2015-16.

“It’s a difficult thing because you can’t tell players to play if they’re injured,” Taylor said. “People do get tired on back-to-backs. So I think you have to go back to your coaches and people running the teams and tell them to use their best judgment.”

Taylor said the league’s schedule makers will work more closely with the networks, trying to reduce travel surrounding nationally televised games while encouraging teams that do rest their stars to do it during home games.

The league also will start the regular season a week early next year to reduce the number of back-to-backs and stretches of four games in five nights.

“I think you just have to ask people to understand where the money is coming from,” Taylor said. “It’s coming from TV and the fans, and we have a responsibility.”

Steve Kerr expects to decide soon whether he will coach Golden State at all in the NBA Finals, saying Monday he is not yet ready but hasn’t ruled himself out for Game 1.

“As of right now I would not coach Thursday night. It’s still up in the air. Still waiting for ‘Ahhhhhh!’?” Kerr said, reaching his hands to the sky as if to receive some miracle healing. “It’s coming, it’s coming. I think once we get to Game 1, that might be a good time to make a decision one way or the other.”

The reigning NBA Coach of the Year is still not feeling well after a May 5 procedure at Duke University to repair a spinal fluid leak stemming from back surgery complications nearly two years ago. He filled in addressing the media Monday when acting coach Mike Brown was out with the flu.

“I told the team the good news is the team is really healthy, the bad news is the coaching staff is dropping like flies,” Kerr joked.

Brown has been coaching the Warriors since Game 3 of the first-round playoff series at Portland, with Kerr assisting at practice and from the locker room before and during games. Brown was expected back Tuesday.

PREVIOUS ARTICLE
Article 40 of 72
NEXT ARTICLE