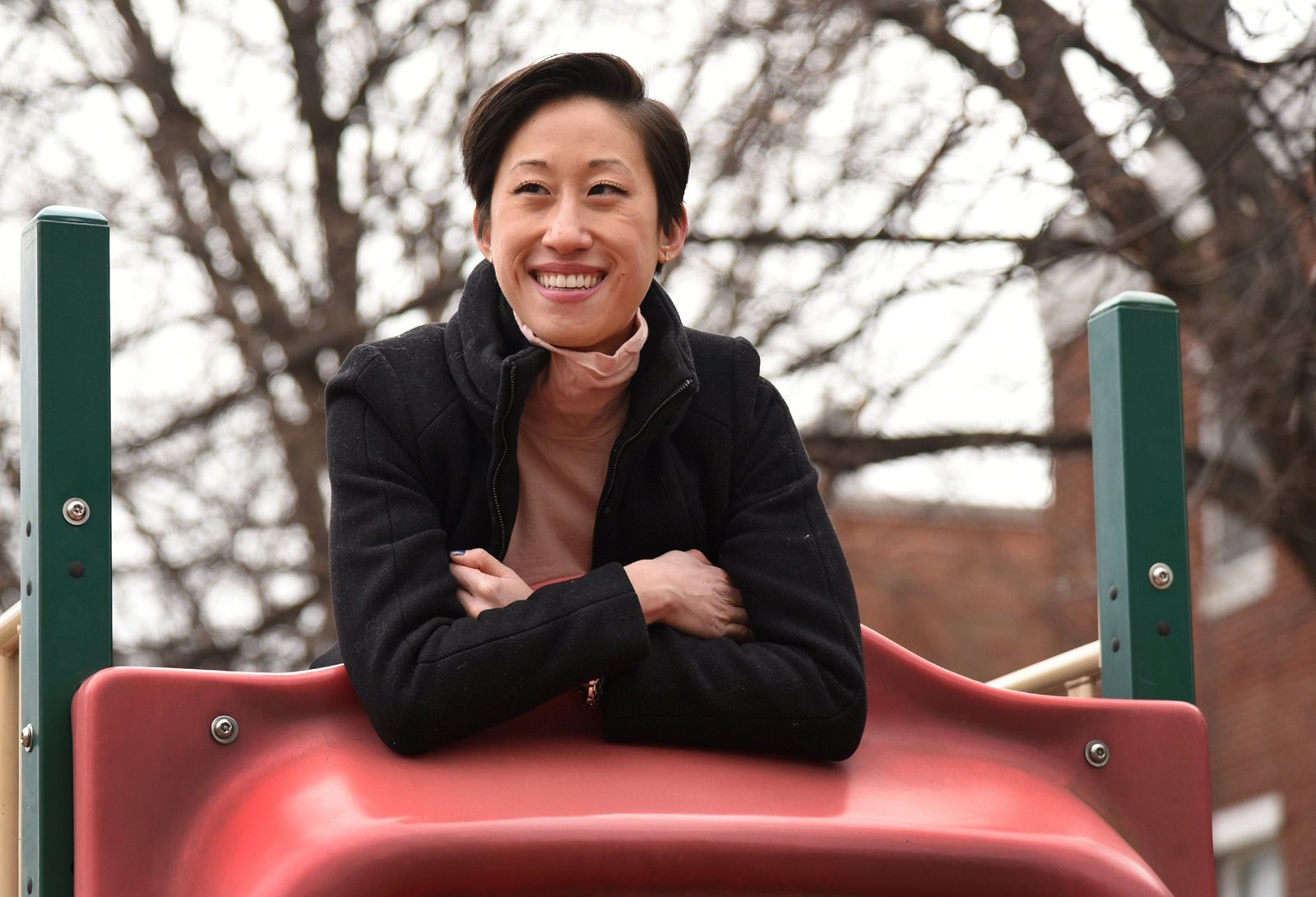 HeeWon Lee, 32, was born on leap day in South Korea and will be celebrating her eighth birthday today. She is an anesthesiology resident at Johns Hopkins Hospital who lives in East Baltimore. ( Amy Davis/Baltimore Sun )
PREVIOUS IMAGE

When astronomer Sosigenes of Alexandria tipped off Julius Caesar to a calendar problem — a year lasted an inconvenient 365.25 days — and advised him to tack an extra day onto the calendar every four years, Caesar went with it. For 46 B.C., that's a clever fix, right?

Take this origin story. Thirty-two years ago today, Choon Lee, a first-year doctor, came home on a snowy night after carousing with colleagues only to find his very pregnant wife at the door, her bags packed. She was in labor, but with no car, no taxi in sight and miserable weather, they could not make it to the hospital in time.

Never mind that Choon Lee was doing internal medicine, not obstetrics. He persuaded his wife to give birth at home, and with the help of his friends, HeeWon Lee was born in Gwangju, South Korea.

“He stupidly, but also courageously saved our lives,” says HeeWon Lee, an anesthesiology resident at the Johns Hopkins Hospital. “I remember talking to him about this, like ‘How could you do that?' and me asking my mom, ‘How could you let him?' But she said, ‘Well, I trusted him.'?”

When there's a choice, leap day births are unpopular, according to Dr. Robert Atlas, the chair of Mercy Medical Center's department of obstetrics and gynecology.

Mothers “have to have the right personality to want to deliver that day if it's going to be an elective procedure,” he said.

His one and only patient scheduled for Monday was Christina Lee, 36, of Cockeysville.

“At first [Dr. Atlas] asked, ‘Do you want that date? Because a lot of people don't,'?” said Lee, who considers herself a bit untraditional. “But I think it's awesome.”

Her son, it turns out, had other plans. Lee gave birth early Sunday to her second son via emergency Caesarean section, in advance of a scheduled Caesarean today.

“Everyone was pretty much making bets that I was going to have her on the 29th,” Katrina said. “I said, ‘There's no way it'll take that long.'?”

But it did. She delivered via C-section on Feb. 29.

This is the first leap day celebration Emerson can remember. Despite some teasing from her friends and family who insist she is only turning 2 instead of 8, she said it feels special to have it come around once every four years.

She's going to celebrate with her friends by going snow tubing at Ski Liberty resort. Katrina said it's important when leap day comes around to actually celebrate on the day itself.

“I'm sending out apology letters because I'm really sorry the party's on a school night, but it has to be on that day,” Katrina said. “You wait four years for it to come around.”

The Honor Society of Leap Year Day Babies, a website whose membership comprises about 11,000 “leapers,” includes 183 from Maryland. Celebrating their birthdays every four years, they represent a “youthful” 0.07 percent of the population — that's one in 1,461.

Raenell Ochampaugh of Oregon launched the website in 1997 with a fellow leaper to connect with leap day babies around the globe.

“It starts around Christmastime and in February, it gets really busy. This week, we've had 30 to 40 leap day babies registering from all over the world,” said Ochampaugh, who will celebrate her 14th birthday at 56 years old.

“We're the only ones who know what it feels like to look at the calendar and not see your birthday,” said Ochampaugh, who was teased as a child for her leap year birthday.

She'll be celebrating it for the first time in four years. She refuses to celebrate on Feb. 28 or March 1, as most leaplings do.

“It's not my birthday any more than August 3rd,” said the Anne Arundel County resident who as a child celebrated on any chosen day of the year: sometimes at the beach in the summer, or on roller skates in the fall. But today, she'll celebrate with family and friends, taking advantage of the freebies offered to leap day babies at places like Miss Shirley's and Hard Rock Cafe. In March, she heads to Tahiti.

That's assuming she doesn't encounter leap day hassles. Ochampaugh said that when she tried to get her driver's license, she was questioned again and again. Was she sure her birthday was on the 29th?

Allison Stewart, 28, of Dundalk said she ran into trouble at age 21 when she first tried to buy alcohol at a liquor store.

“The person that was ringing me up checked my ID and they thought my ID was fake because they didn't understand the 29th concept,” Stewart said. “I had to kind of educate them.”

Sarah Brandt, 36, of Federal Hill, noticed that Facebook recognized her off-year birthdays only as of last year, showing it on Feb. 28. Previously, Brandt said, her birthday was listed only on the leap year.

“A long time ago I remember that some government agencies had trouble putting in my birthday,” she said. “They would end up forcing it into the computer, manually entering it in or calling a manager.”

Gregory Urban, chief operating officer for the Maryland Department of Information and Technology, said that modern systems should no longer have problems processing the leap year.

Some of leap day's novelty applies outside births and birthdays.

According to wedding website The Knot, its users are planning about 1,480 weddings today compared with an average of 732 weddings for the previous four Mondays in February.

Between the past four leap days, 30 weddings have been officiated at Baltimore's city courthouse, with the most — 21 — in 2008, when leap day fell on a Friday, according to Patricia Owens, a manager in the Marriage License Department.

Still, that number fell short of the 41 weddings on Valentine's Day in 2008, which arrived on a Thursday.

Michael and Anna Cummings of Silver Run picked the day to be a part of their lives back in 1964.

They had planned for a February wedding, but when they went to the church, the location was booked for 12 straight weekends, except for a gap at the 29th, a Saturday that year.

“We told them we didn't care,” Michael said. “So we got married on the 29th, and over a period of time we began to realize just how interesting that is.”

Michael said he has never met another couple who have been married on leap day.

“When we meet people, I like to tell them we've been married for 52 years, but we'll never have a 55th anniversary. They'll stare at us like ‘What do you mean? That's not that far away,'?” Michael said. “That's when I tell them our 55th anniversary will be in the year 2184.”

Leaper Paula Mattes, who divides her time between her home in Essex and Richmond, Va., is turning 60 and combining her 15th leap year birthday celebration with a surprise wedding.

“None of our friends or family would be expecting us to get married and to have the birthday,” Mattes said.

But the ceremony was to be held on Saturday, because most of her relatives have obligations during the week.

“We'll remember it as leap year, and that's important to me because I was born on a leap year, and I think to people that weren't, they don't understand the significance,” Mattes said. “Leap year babies are thought of as forever youthful.”

PREVIOUS ARTICLE
Article 3 of 71
NEXT ARTICLE