W. Baltimore had bigger problem than others 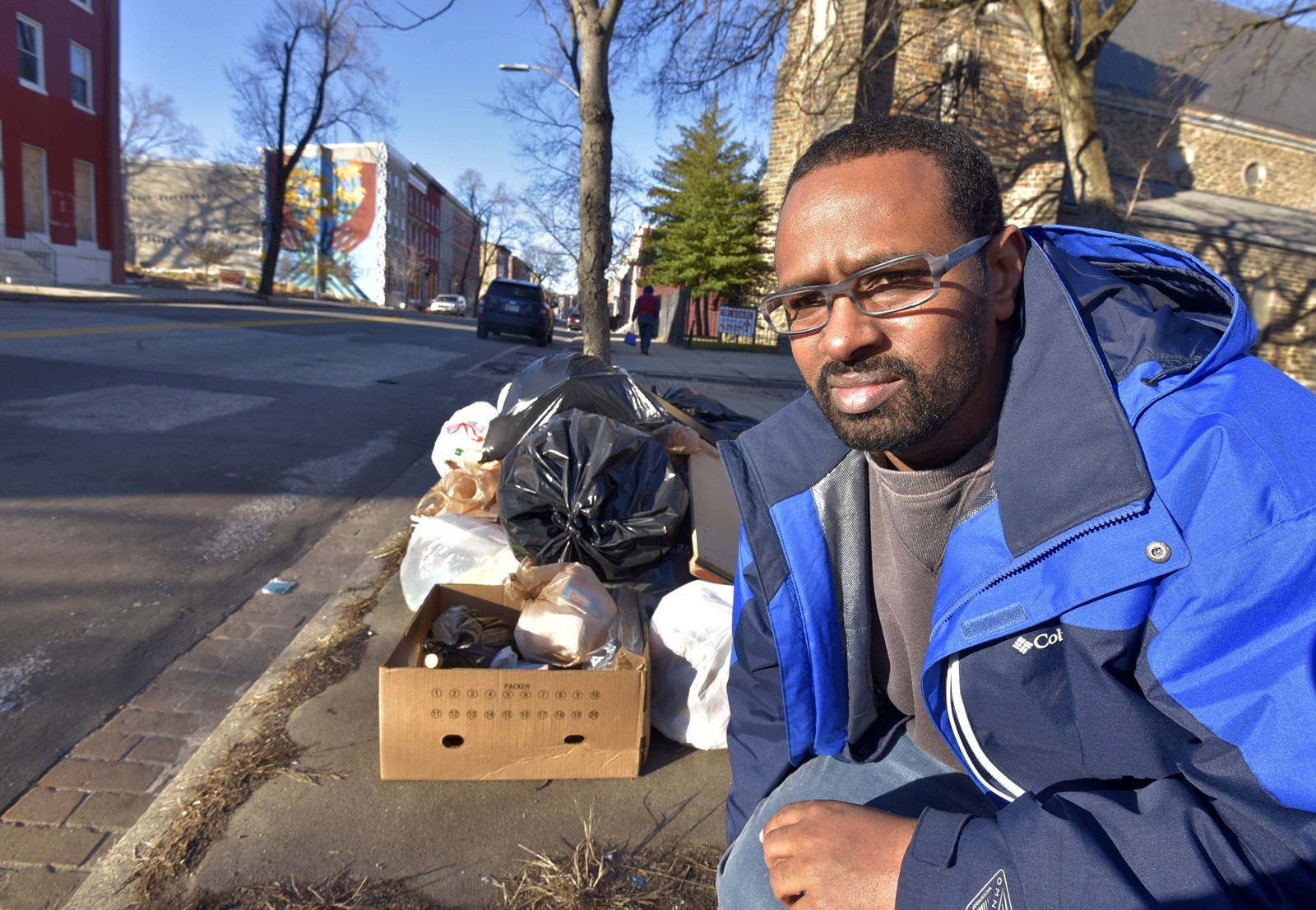 Leonard Spain is shown in the 200 block of Carey St., where there is a lot of trash that attracts mosquitoes. ( Algerina Perna/Baltimore Sun )
PREVIOUS IMAGE

Every time people move into or out of a block of rental rowhouses in Franklin Square, bits of their lives — garbage bags, broken furniture, fast-food containers — are abandoned under the same tree on the sidewalk.

“The cats and the rats drag it around, and the wind blows stuff everywhere,” said Leonard Spain, who has lived near the 200 block of N. Carey St. in Franklin Square for most of his 48 years. “This is what we deal with in poor communities. It's the social norm. It's a big public health problem.”

More garbage means more mosquitoes, new research conducted in Baltimore finds, and that increases the risk of mosquito-borne diseases such as West Nile, dengue and now Zika. The Zika virus is an emerging threat that was recently declared an international public health emergency because of its swift spread to dozens of countries and its possible link to the devastating birth defect microcephaly.

The researchers who went door-to-door in five West Baltimore neighborhoods during the past three years found far more mosquitoes in lower-income areas.

Mosquitoes are considered the world's deadliest animal because of the number of deaths each year linked to malaria — another disease carried by the insect. But while malaria isn't a problem in the United States, mosquitoes carry other diseases. In Baltimore, they transmitted nine cases of West Nile, chikungunya and dengue to people in 2013 and 2014, according to the most recent state health data.

And Maryland recorded its first case of Zika earlier this month and now has three, though the infected people had traveled to one of the affected countries.

The main reason poor neighborhoods have more of the buzzing, biting pests is because there are more “discarded container habitats” — trash that pools water and harbors mosquito larvae, said Shannon L. LaDeau, an associate scientist of disease ecology at the Cary Institute of Ecosystem Studies, an independent environmental research organization in New York. The group leads the Baltimore Ecosystem Study, a partnership among government agencies, private institutions and universities, including the University of Maryland, Baltimore County, looking at various environmental health issues.

Mosquito larvae require very small amounts of stagnant water to survive, LaDeau said. While there are plenty of opportunities for breeding in every neighborhood in gutters, flower pots and litter, the trash-strewn alleys and vacant properties in poorer communities pose a particular hazard.

Researchers are still trying to determine whether more mosquitoes mean greater risk of disease transmission. For example, they said, people living in low-income areas might get some protection through larger rat populations because some mosquito species prefer biting them. And LaDeau said those in wealthier communities might make themselves targets by spending more time in shady backyards that attract mosquitoes.

It is clear, however, that poorer neighborhoods that already face more safety, economic and health worries also must contend with more mosquitoes, she said.

“Over an entire season we get about three times more blood-seeking adult mosquitoes in low-income neighborhoods,” LaDeau said.

To collect samples, college students were sent to thousands of addresses. They included relatively higher-income blocks in Bolton Hill and Hollins Market, lower-income blocks in Franklin Square and Harlem Park, and mixed areas of Union Square.

John-Henry Pitas, a graduate student at the University of Maryland, Baltimore County, joined the group knocking on doors, climbing fences and walking alleys with a turkey baster to collect water samples. The contents went to a lab where mosquito larvae were counted. For a few months, traps also were set out to collect adult mosquitoes so researchers could see what or who they were feeding on.

Neighbors routinely ranked mosquitoes as more of a nuisance than a public health threat, though there's been no canvassing since Zika began grabbing headlines. Many did know mosquitoes carry diseases and could point to sources, such as old tire piles, where the pests were at their worst, he said.

Some of the sights have stuck with Pitas, such as an alley filed with old toilets, construction scraps and a pile of old food. Sometimes neighbors said abandoned buildings overgrown with weeds served as cover not just for mosquitoes but for drug activity.

“It's been a heart-breaking experience to go and see some parts of the city where people have to live,” Pitas said. “The mosquitoes are just one of so many other things these people, largely through no fault of their own, are exposed to.”

He hoped the research would lead to better mosquito control.

The researchers plan to award up to 10 grants of $1,000 to $1,500 to communities with abatement ideas. Funds will come from the National Science Foundation. The Parks and People Foundation, which promotes open space, will help choose proposals and researchers will monitor the effects.

Those who want to help now can ensure there aren't empty food containers, pots, gutter extensions, tires or other places where water can pool for a week — about the time it takes for larvae to mature.

In the long term, the efforts may involve several means of controlling the 59 species of mosquitoes found in Maryland, especially those that carry diseases such as Zika —the Aedes aegypti and the far more common Aedes albopictus, also known as the Asian tiger mosquito.

The city has no specific mosquito control program, but officials drop powdered larvacide into pools of standing water when residents call. They got about 80 calls last year. City Health Department officials also are leading a new working group that plans a response to Zika, though department spokesman Sean Naron said the panel hasn't met yet.

“I'm sure mosquito control will be an issue they'll discuss,” Naron said.

City housing officials also will continue addressing the larger problem of trash dumps and other code violations. Most complaints focus on trash and weeds rather than mosquitoes, said Tania Baker, a housing spokeswoman.

Residents could face $50 citations for failing to maintain their property in a clean, sanitary condition. Work crews are dispatched if the problems are on city or abandoned property.

Housing officials log more than 300,000 inspections a year, with almost 70,000 initiated by residents, but some problems can't be addressed with citations alone, Baker said. The city sometimes mails fliers to area residents about proper trash disposal.

Back in Franklin Square, Spain frets about what it will take to change attitudes and behaviors. He repeatedly calls the city and speaks to neighbors, and has even tried to hunt down landlords who don't provide trash cans or instruct residents on disposal.

City garbage collectors pick up the trash bags, but often leave other junk and unbagged refuse behind on the sidewalk and in the alleys, Spain said. It's tough to identify the culprits. The rowhouses are owned mostly by limited liability companies with post office box addresses. One bricked-up house is owned by the city.

Just three streets away, in Hollins Market, he believes there are more caring homeowners and fewer fast-food shops with their ubiquitous plastic foam containers and soda cups, ideal habitats for mosquitoes, Spain said.

“Trash is a small thing to so many people here,” he said. “Older people used to make younger people clean up. How do we market that now? How do we make people understand it's not just trash, it's a health hazard?”

PREVIOUS ARTICLE
Article 2 of 71
NEXT ARTICLE