Waiting room will have no movies, plenty of outlets 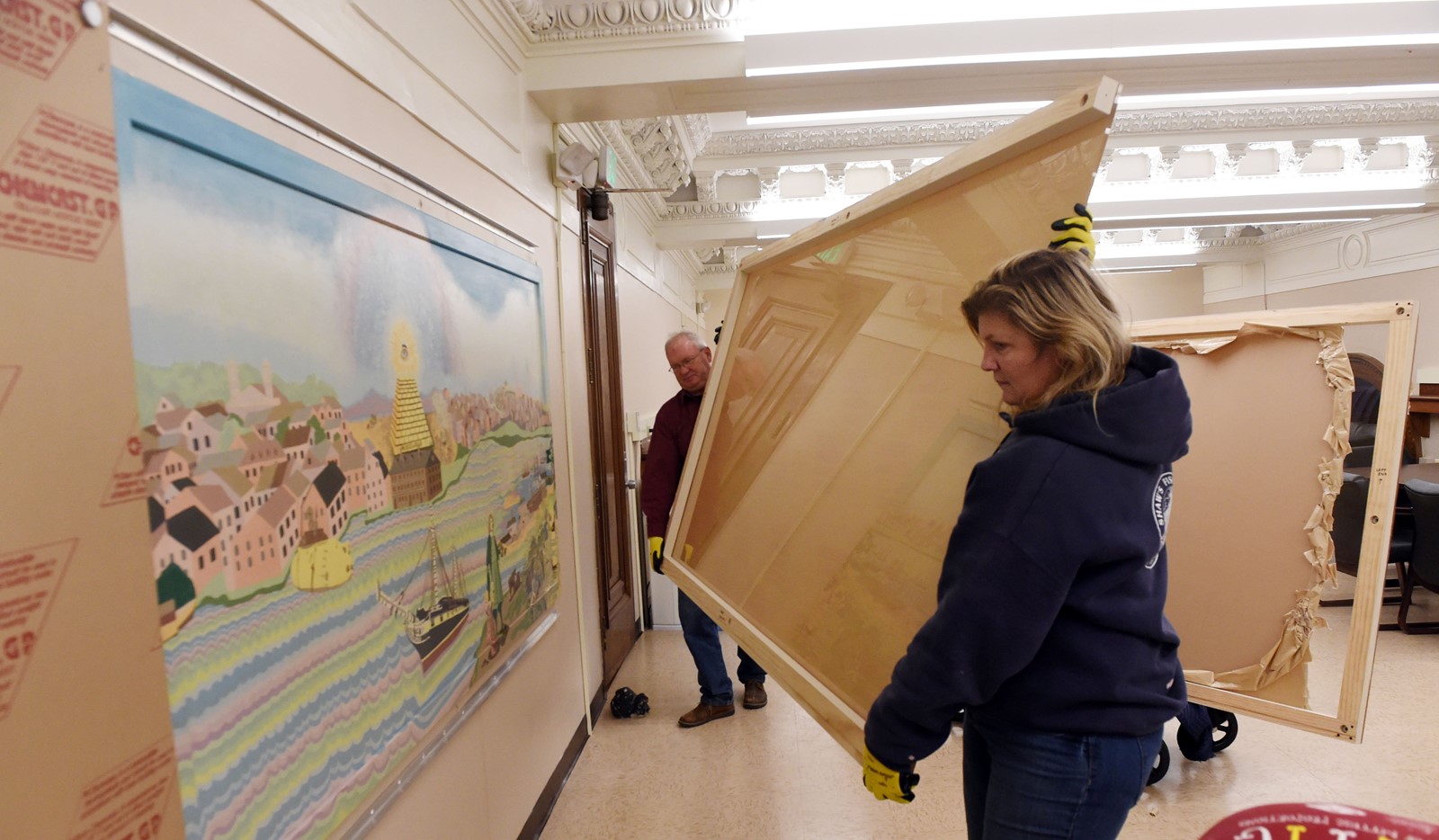 In swirling pastel colors, the wooden mural illustrates Baltimore’s history, complete with rainbows, Lord Calvert and the Beatles’ Yellow Submarine. For decades, it hung in a dark hallway behind the men’s room at the War Memorial, where it was dripped on by a leaky pipe.

Gilman-Forlini helped rescue the mural from oblivion, installing it instead in the courthouse’s new, $500,000 third-floor waiting room. Officials hope the new quiet room will take some of the sting out of fulfilling one’s civic duty, by offering jurors a more pleasant place to pass the purgatorial hours.

“We recognize that jury service requires sacrifice on the part of our citizens,” said jury commissioner Melissa Monroe. “We hope that this new room helps to enhance the experience of our jurors and to express our sincere gratitude to them.”

The right to a trial by jury is an old and crucial one, a cornerstone of democracies. According to Greek mythology, in the fifth century B.C., the goddess Athena summoned a jury of 12 citizens to help her decide the fate of Orestes, who had killed his mother after his mother had killed his father. Orestes was acquitted, and Athena was so satisfied that she ordered all homicide cases to be tried in such a fashion.

Centuries later, Baltimore residents are summoned not by Athena, but by mail — as often as once every 12 months. “There are some people who get summoned every year,” Monroe said. That’s more than residents of many other Maryland counties. In Harford, for example, jurors may receive a summons in the mail every year, but must serve only once every three years.

“We all love to hate it, right?” said Melissa Girard, 42, a South Baltimore resident who once had jury duty for 12 hours. Despite the inconvenience, she knows that jury duty is important. “I think it really matters and it’s a very small thing that we can give.”

Defense attorney Warren Brown said juries are a check on government power — ensuring that no one can be convicted by the government alone. He said he tells jurors: “As inconvenient as it is, it is the rarest opportunity to exercise the greatest amount of power as a citizen. You are one of 12 in a criminal case. You vote, you’re one in a million.”

But being a juror can bring strains in the form of lost wages and child care, said David Jaros, a law professor at the University of Baltimore. He’s all for anything to make it “more palatable.” “I think it’s important to acknowledge what a strain jury duty can be on people who live busy lives.”

Even Mother Teresa thinks so. In February 1993, she wrote the court to request a nun be excused from jury duty. The letter still hangs in the courthouse museum.

The new quiet space, more than twice the square footage of the previous quiet room, is freshly painted pink with arched windows overlooking the street below. Energy-efficient lighting illuminates the room’s Renaissance Revival crown molding, original to when the courthouse opened in 1899. More outlets ensure that everyone who wants to can charge their phone.

Girard said she looks forward to sitting in the refurbished quiet room the next time she has jury duty. “The next thing is the Wi-Fi,” Monroe said.

The quiet room, where signs affixed to the door promise library-like silence, is the most sought-after waiting room for Baltimore jurors. In the other three waiting rooms, the same three films play over and over and over again, for an entire year. They used to play for years.

Monroe said that when she became jury commissioner in 2015, “The first thing I did was take ‘Dirty Dancing’ and throw it in the trash.”

The eccentric old building’s broader future is a question mark. The Maryland Stadium Authority is studying options to move the court to a new building altogether.

“I think this mural is going to give people plenty to stare at for hours at a time,” said Valerie Long, an exhibitions coordinator for the American Visionary Art Museum. The museum, where the mural had previously been on display, was hired to install it in the courthouse.

While her friends in Baltimore County rarely get called for jury duty more than once every five years, Long said she gets a summons in the mail every year as a city resident. She believes it’s because the city has more crime and fewer eligible jurors than outlying areas. Monroe nods sympathetically. She’s used to hearing complaints.

PREVIOUS ARTICLE
Article 3 of 97
NEXT ARTICLE