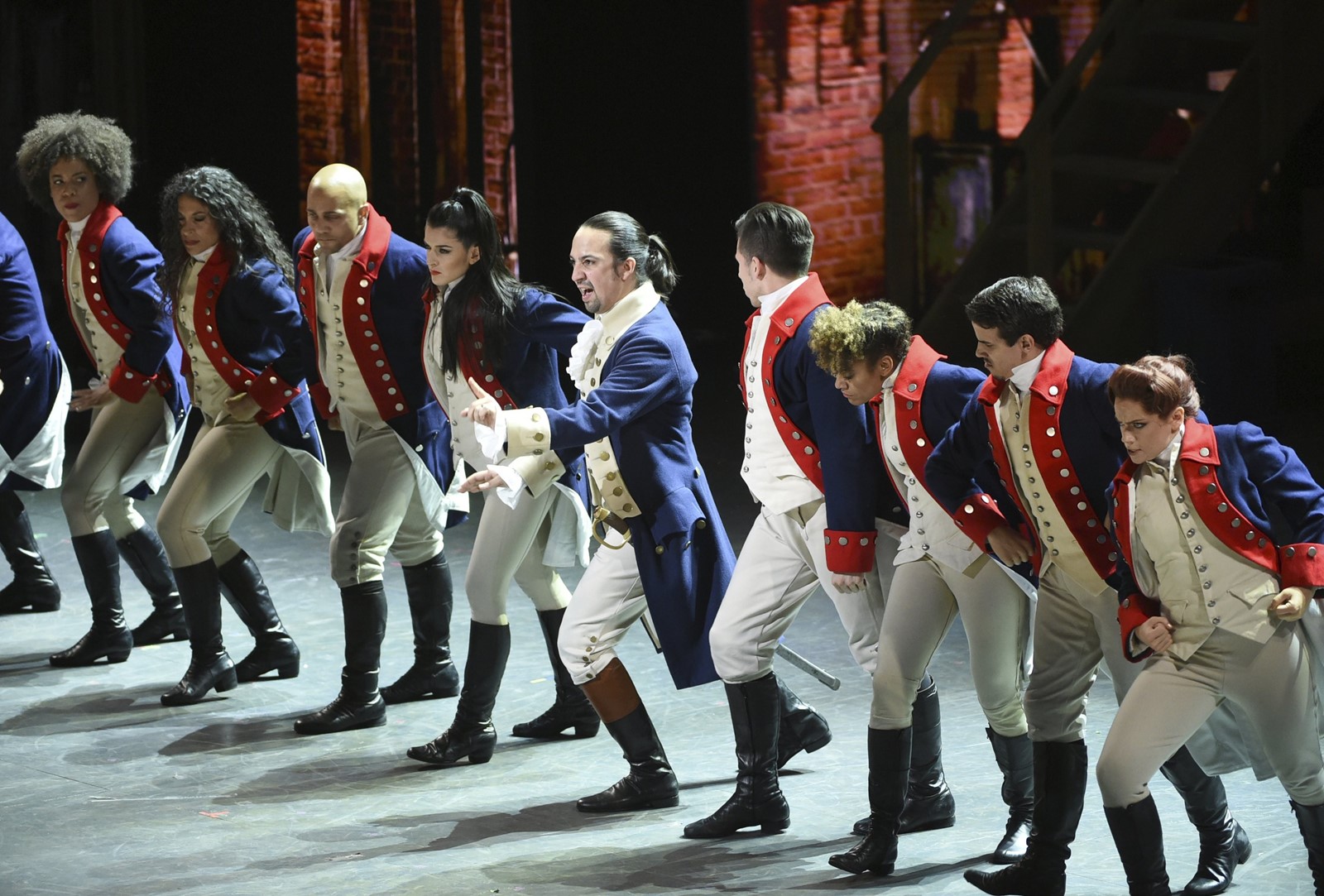 Lin-Manuel Miranda, center, and the cast of “Hamilton” perform at the Tony Awards in New York in 2016. A new play by Ishmael Reed questions whether Miranda overstated Alexander Hamilton’s opposition to slavery, among other things. (Evan Agostini/Invision)
PREVIOUS IMAGE

Ever since the historical musical “Hamilton” began its march to near-universal infatuation, one group has noticeably withheld its applause — historians. Many academics argue the portrait of Alexander Hamilton, the star of our $10 bills, is a counterfeit. Now they’re escalating their fight.

Ishmael Reed, who has been nominated twice for a National Book Award, has chosen to fight fire with fire — collecting his critique of Lin-Manuel Miranda’s acclaimed show into a play.

Reed’s “The Haunting of Lin-Manuel Miranda” is an uncompromising takedown of “Hamilton,” reminding viewers of the Founding Father’s complicity in slavery and his war on Native Americans.

“My goal is that this be a counter-narrative to the text that has been distributed to thousands of students throughout the country,” said Reed, who teaches at the California College of the Arts and the University of California at Berkeley and whose latest novel is “Conjugating Hindi.”

Reed, whose play had a recent reading in New York and who is raising money for a four-week production in May, is part of a wave of “Hamilton” skeptics who have written journal articles, newspaper op-eds and a 2018 collection of essays, “Historians on Hamilton.”

Professors nationwide argue that Miranda got Hamilton all wrong: The Founding Father wasn’t progressive at all, his actual role as a slave owner has been whitewashed, and the pro-immigrant figure onstage hides the fact that he was, in fact, an anti-immigration elitist.

“It’s a fictional rewrite of Hamilton. You can’t pick the history facts that you want,” said Nancy Isenberg, a professor of American history at Louisiana State University who has written a biography of Aaron Burr and is the author of “White Trash: The 400-Year Untold History of Class in America.”

It’s not just the portrait of Hamilton that has drawn fire. Critics also say Miranda’s portrait of Burr is distorted and argue that Hamilton’s sister-in-law Angelica Schuyler was in no way a feminist, as she is portrayed in the musical. Reed considers “Hamilton” so problematic that even edits to it wouldn’t help. “I think the corrective would be to close the show,” he said.

Reed’s play borrows from Charles Dickens in portraying a naive Miranda being visited by a succession of ghostly slaves, Native Americans and indentured servants — people Reed argues never made it into the Tony-, Grammy-, and Pulitzer-winning musical. “What I tried to do was to cover the voices that were not present onstage,” Reed said.

Reed, who has not seen “Hamilton” but read it, criticizes the musical as just the latest piece of entertainment that is sympathetic to slave owners. “I say this is a successor to ‘Gone With the Wind,’?” he said. “But at least in ‘Gone With the Wind,’ Hattie McDaniel had a speaking part.”

In Reed’s play, Hamilton is unmasked as a slave owner who once worked for a slave trading firm in St. Croix. “You’ve been up to your blue eyes in the slave trade from the time you were a child,” he is told. A slave tells Miranda that the Schuyler family, which Hamilton married into, were brutal slave owners, and life under them was “no damned musical comedy.”

A horrified fictional Miranda is eventually convinced by the evidence. “I have to undo the damage that I have done,” he wails at the end. “Because of me, thousands of schoolchildren are trapped intellectually in the same lies as I was.”

Perhaps the true villain of the piece is historian Ron Chernow, who wrote the award-winning biography of Hamilton that Miranda relied upon. (“You should have read books by black people,” a slave tells Miranda in Reed’s play.) At the play’s conclusion, the fictional Chernow advises the fictional Miranda to stop making a fuss and just enjoy their “good hustle.”

Chernow has declined to comment on Reed’s criticisms, and a publicist for “Hamilton” and Miranda also declined comment.

However, Miranda has said in interviews that he felt a responsibility to be as historically accurate as possible but that “Hamilton” is necessarily a work of historical fiction, including dramatizations and imprecisions.

For Reed and Isenberg, the omissions and distortions in “Hamilton” are part of a larger problem with the way the Founding Fathers are portrayed in mainstream history, often as flawless, enlightened geniuses. It even has a name: “Founders Chic.”

Isenberg notes that, over generations, George Washington, Thomas Jefferson and then John Adams have been held up periodically as darling patriotic heroes. Now it’s Hamilton’s turn.

“We always want to refashion the Founders to be a mirror for us,” she said. “My job as a historian is to dislodge misconceptions, not to entertain my students and not to make people feel comfortable. That’s what good history does.”

Rutgers professor Lyra Monteiro’s criticism jumps from the page to the stage when she notes that three minority actors play white, slave-owning, current or future presidents — obscuring “the white supremacist origins of our country.”

“It’s a musical about the mythology of the ruling class — that anybody can join it,” she said, noting that both Hillary Clinton and Dick Cheney are fans. “It’s the myth that the ruling class of the United States wants to believe.”

Monteiro is keeping her fingers crossed that Reed gets the backing to mount his play. “I’d love to take my students to that,” she said.

PREVIOUS ARTICLE
Article 71 of 102
NEXT ARTICLE