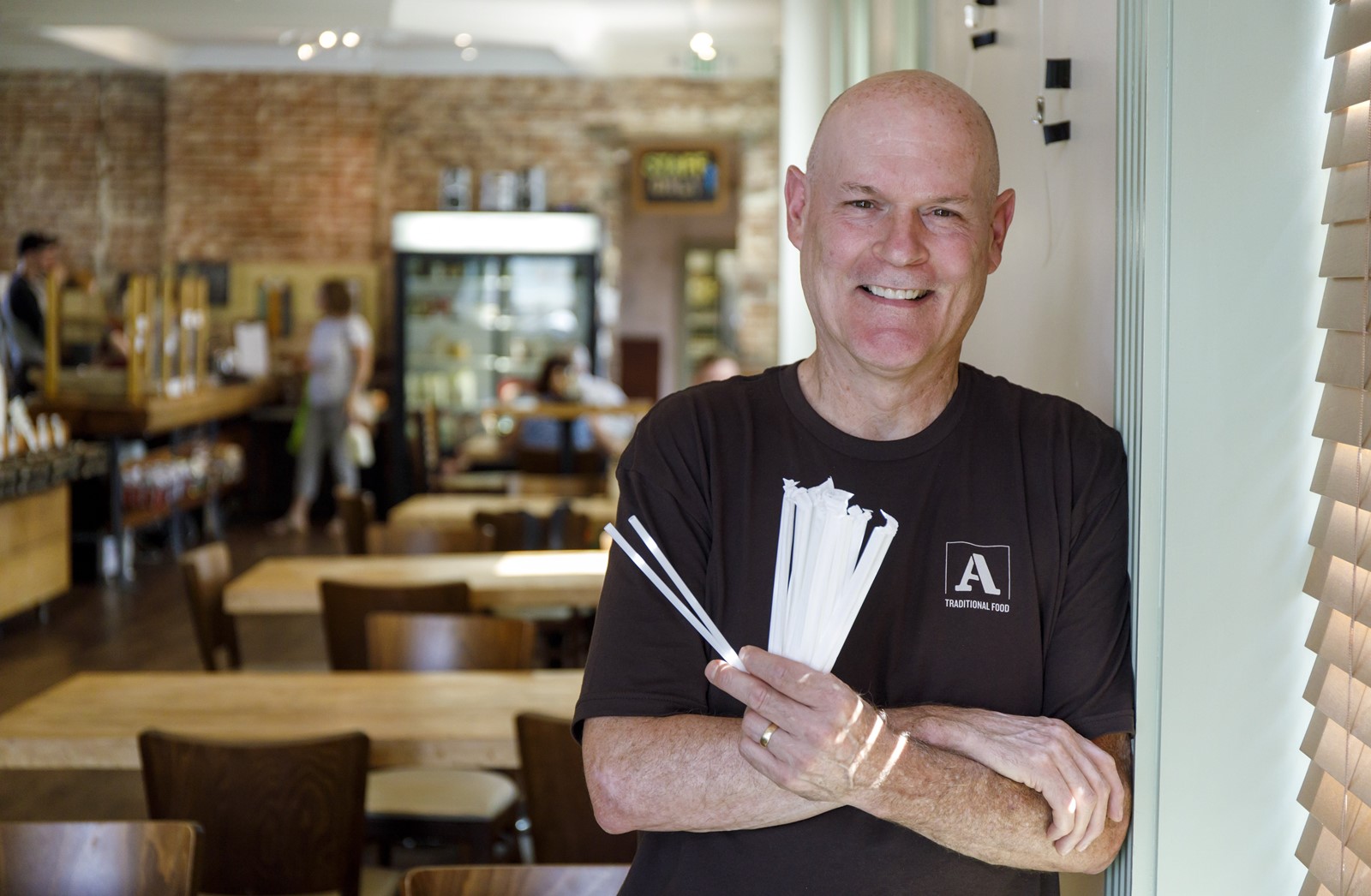 Ned Atwater, the owner of Atwater’s restaurants and carry-outs, with paper straws, which the chain substituted for plastic about two months ago. (Brian Cassella/for the Baltimore Sun )
PREVIOUS IMAGE

For nearly a decade, Acme Paper & Supply Co. has given restaurants and other customers a choice of paper straws instead of the commonly used plastic ones.

But until a few months ago, the paper straw option had few takers.

“It’s just been a little drip, and now the spigots are turned on and the demand is pouring out,” said Ron Attman, CEO of the Savage-based packaging supplier. “We’re getting inquiries daily about this, and a lot of customers are calling and saying they want to make the switch. … People are deciding that they no longer want to use plastic straws.”

Drinking straws may have been around for more than 5,000 years, but the plastic version is facing a modern backlash. Cities, businesses and consumers seeking ways to cut down on waste have shunned the plastic straw, which never completely breaks down and can end up in landfills or polluting oceans.

Consumer awareness, new alternatives for sipping drinks and growing concern about how plastics can harm the environment are fueling the movement, experts say. Critics, meanwhile, question whether science supports an outright ban on plastic straws at bars and restaurants that some U.S. towns and cities are passing or proposing, including in New York, Florida and California.

Now the food service industry is adding to the momentum.

Coffee shop giant Starbucks announced plans Monday to eliminate single-use plastic straws at its stores — more than 1 billion per year — by 2020. The chain plans to roll out compostable or paper straws and strawless lids for iced coffee and tea at stores, including 264 in Maryland. McDonald’s plans to start testing plastic straw alternatives in the U.S. later this year and switch to paper in the United Kingdom and Ireland. On Wednesday, American Airlines followed an earlier move by Alaska Airlines and said it will rid all flights and lounges of plastic straws and stir sticks.

“We’re thrilled that Starbucks has jumped on board,” said Dale Schmidt, chief operating officer at the National Aquarium in Baltimore. “It’s about time, and why isn’t everybody else doing this?”

Schmidt said plastic bags that end up in the ocean look to turtles like jellyfish and get caught in their throats, making it hard for them to breathe. Plastic six-pack holders are also a hazard. “Animals get caught in these things and it can injure or may kill, normally in a slow way,” he said.

The aquarium decided a couple of years ago that “we do environmental education, so we needed to walk the walk,” Schmidt said. In spring 2017, the aquarium eliminated all single-use plastic foodware, replacing disposable products with reusable, compostable or more sustainable recycling options. Drinks are now sold in refillable containers or aluminum cans. The attraction had already ditched disposable water bottles and plastic bags in gift shops.

Environmental experts estimates that 5 trillion pieces of plastic are floating in the ocean, harming ecosystems and animals. A video shot several years ago by a marine biologist at Texas A&M University, showing a straw stuck in a turtle’s nose, has received fresh attention amid the news on plastic straw bans.

Atwater’s, the Baltimore-area restaurants and carryouts that specialize in soup, sandwiches, salad, cheese and other food, switched from plastic straws to paper about two months ago. The eateries also have moved to more environmentally friendly carryout cups and dishes, using cardboard sandwich containers and platter tray lids made of a sugar cane byproduct. The company stopped selling bottled water years ago.

“One of our guiding principles is to use less, recycle, reuse,” said owner Ned Atwater. “A lot of this is driven by the front-line staff people, receiving customer comments and paying attention. We have looked around for alternatives. Like anything else in small business, you have to balance the cost of the items versus what its benefit will be.”

“When it came to straws, we looked for alternatives and came up with a paper one,” he said.

Customers have offered no negative feedback on the paper straws. “The product performs the same way,” he said.

“It’s hard to disagree with a company that’s making a statement about the environment and has a solution,” said Yaverbaum, CEO of Ericho Communications. “Giving a different cup top, who can complain about that? … It’s not a huge risk, and hard to imagine people getting overly emotional about plastic straws.”

He predicted more companies will follow with “socially responsible” moves that endear them to the public while not hurting their bottom line.

Baltimore City Council members John T. Bullock and Mary Pat Clarke said they may propose a plastic straw ban. The City Council passed a ban on polystyrene foam containers for carryout food and drink in March that will take effect in October 2019.

The Restaurant Association of Maryland, which opposed the plastic foam ban, has no position yet on straw bans, said Melvin R. Thompson, an association vice president.

In testimony before the council, Thompson had argued the plastic foam ban wouldn’t help the environment because people still would litter other products. And he argued that eateries would be forced to buy more expensive containers. Estimates showed replacements for foam clamshell containers would cost more than twice as much. Opposition also came from carryout and delivery businesses, which have lower check averages and profit margins.

Some critics decry this “war on drinking straws,” including attorneys at Towson-based Regulatory Solutions Consultancy, LLC, a consultant to restaurants and retailers. In an April blog post, attorneys Nancy Hudes and Stuart Kaplow took issue with “straw on request” laws in California and a Seattle ban on plastic straws and utensils in bars and restaurants that takes effect this month. Seattle is reportedly the first major U.S. city to enact such a ban.

From Attman’s perspective, interest in finding new ways to sip from carryout cups is peaking. The Acme Paper CEO said customers ranging from government agencies to stadiums to neighborhood sandwich shops are looking at switching from plastic to paper, to no straw, or to straws on demand. That’s happening even though paper straws tend to cost three to four times more than plastic, Attman said.

“The groundswell has swelled,” Attman said, adding it’s too soon to tell the impact on his own business. “Our job is to have the product our customers want to have, and they’re doing the same thing.”