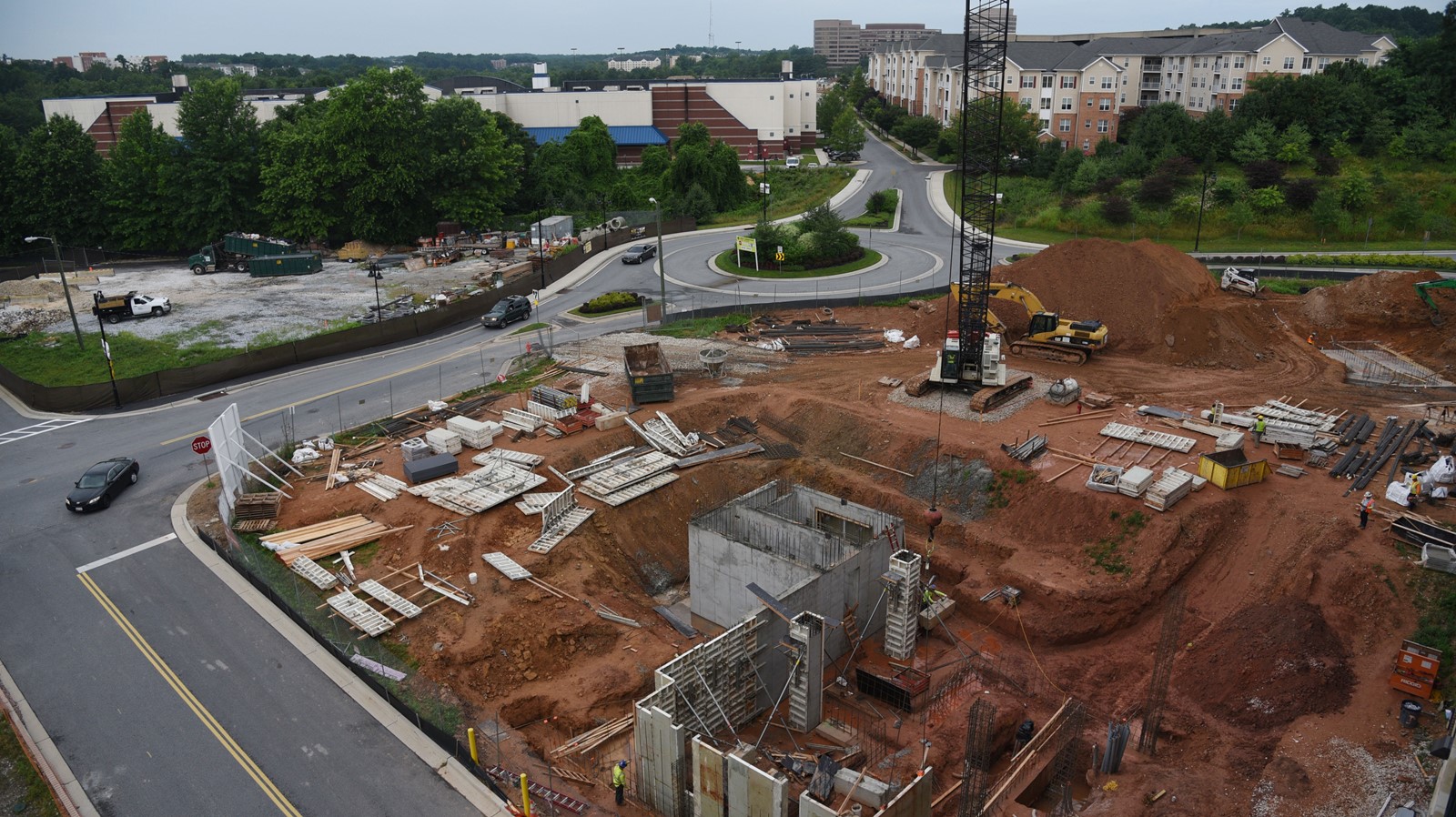 Construction site for The Met at Metro Centre last July. The apartment building is a few blocks from the Owings Mills Station for the Metro SubwayLink, the core of Metro Centre, and is to open in the spring. (Kim Hairston/Baltimore Sun 2018)
PREVIOUS IMAGE

Tens of thousands of people ride the subway to the Owings Mills station every month, and developer Howard S. Brown is betting a portion of them will want to live, eat and work there, too.

His David S. Brown Enterprises has been fashioning an urban-style community adjacent to the Metro station, where trains depart every 10 minutes or so for the 15-mile run from Baltimore’s northwestern suburbs to Johns Hopkins Hospital in East Baltimore.

When Brown’s Metro Centre is completed in the next decade, it will likely be the largest transit-oriented development in the greater Baltimore region — and though the state envisions others, it also may be among the few built at all.

Baltimore lags behind other areas of the country in developing around transit hubs, including neighboring Washington, D.C., which has a six-line, 91-station subway system more than 100 miles long. Observers and developers say the region’s biggest challenge is a transit system that is not only far smaller but viewed as disjointed and sometimes unreliable and unsafe.

The projects getting off the ground are led by developers like Brown, who believes people want to walk more and drive less and developers will build to suit them.

“It’s a different way of thinking,” said Brown, chairman of Brown Enterprises. “We used to put housing over here and retail shops over there and offices other there. Now people want everything to be compact and walkable.”

State officials are still seeking interest for sites beyond Owings Mills, where the first buildings rose in 2007 on 46 acres of land leased from the Maryland Department of Transportation. A smaller development in Savage on MARC’s Camden commuter line to Washington is largely complete and state officials are collaborating with Anne Arundel County on development opportunities at another site near the Odenton MARC station on the Penn line.

In the Maryland suburbs of Washington, the Washington Metropolitan Area Transit Authority is exploring development close by stations once the Purple Line light rail is complete and other sites are in the works or done along the Metro system.

The transit agencies support the projects to boost use of public transportation, as well as produce good opportunities to work and shop, said Nimisha Sharma, director of MDOT’s Office of Real Estate and Economic Development. But they don’t build projects on their own.

“We’re always looking at the next [transit-oriented development] site,” she said. “We’ll look at any site that is close to transit and we have property — and that gets interest from developers.”

To get started in Owings Mills, Brown built a free-parking garage to make up for spaces lost to construction. He worked with the county and community college in 2013 in a new building next door before building apartments. Infrastructure and several other buildings are done or planned, including a Marriott-flagged hotel and a third apartment building.

Retailers are there or coming, including a Title Boxing Club, World of Beer, an upscale salon, a burger place and pharmacy.

It’s not all gone smoothly. One eatery, a Fractured Prune donut shop, closed, citing lack of foot traffic. And the Metro subway has seen sliding ridership. There were more than 75,000 riders exiting the train in Owings Mills in April, down from about 90,000 the year before and more than 94,000 in 2016, according to the Maryland Transit Administration.

The decreased ridership could reflect a number of things, includinglast winter for emergency track repairs and the closure of nearby Owings Mills Mall. The recent opening of a Costco and other stores soon on the former mall site could lure people back.

But decreased ridership could be a bad omen for developers. The MTA said ridership on systems nationwide has been down. Officials cite cheap gas, increased incomes and aging populations, as well as the rise of ride-sharing services, telecommuting and even bike riding.

Max Boam, a graphic designer for the Johns Hopkins Health System, lives in Owings Mills and rides to work from Metro Centre. He and his wife, native Londoners accustomed to a train commute, rented an apartment near the station when they moved to Maryland about 20 years ago and would have been attracted to Metro Centre.

He said he normally reads during his 30-minute rides. He saves money on parking downtown and wear on his car. And he thinks more people will consider Owings Mills because of the development.

But he also sees challenges for transit-oriented developments relying on the local transit system: The train breaks down, it doesn’t go many places and America’s car culture persists.

“The system just isn’t convenient for the vast majority of people,” Boam said. “I also know commuting is in my mindset and if I’d grown up here more than likely it wouldn’t be.”

Mansoureh Jeihani studied transit-oriented developments in her role as a professor at Morgan State University’s department of transportation and urban infrastructure studies. She and colleagues defined the projects widely as mixed-use spaces with access to some form of public transportation.

They calculated scores for segments of Baltimore City and County based on the distance to rail station, number of bus lines, crime rate, number of restaurants and bars and employment density. The only high scores were downtown, which she said was really one big transit-oriented development.

“There is no good transit component in many of them,” she said. “And besides the availability of transit, problems were reliability of the transit systems and safety.”

Jeihani said more development would come when and if officials improve the system and then promote ridership.

There are other potential hurdles to such development, some involving developers themselves. A project surrounding the complex of aging state offices served by Metro and Light Rail at State Center in Baltimore has been long delayed, though Gov. Hogan recently expressed interest in restarting it with a new developer.

Brown said he’d be interested. He developed nearby Symphony Center, which are apartment towers and offices between the light rail stop and Meyerhoff Symphony Hall.

Brown also plans a renewed effort to build a transit-related project at the site of the former Morris A. Mechanic Theater downtown, demolished in 2014, as well as on the nearby 300 block of Baltimore Street, where he plans a 32-story apartment tower. But he said the former has been stymied by legal issues and the latter has faced financing issues.

Neighbors concerned about increased congestion and other problems also can be stumbling blocks. Good planning can help mitigate many issues, said Caroline Paff, a principal at VI Development and a consultant for Clipper Mill, zoned by Baltimore City for transit-oriented development.

The project’s developer ValStone Partners is seeking to address parking and flooding concerns, and also doubts about how many people will use public transit, Paff said. ValStone also decided to offer rent rebates in the first building if residents agree not to park a car there.

Transit-oriented development “in Baltimore has certainly lagged other cities,” she said.

“Obviously, robust transit use demands a safe, reliable and affordable transit system that goes where people need it to go,” Paff said. “It also has to be safe and comfortable to get to and from the transit stops — we all have a role to play in this, city, state and private property owners.”