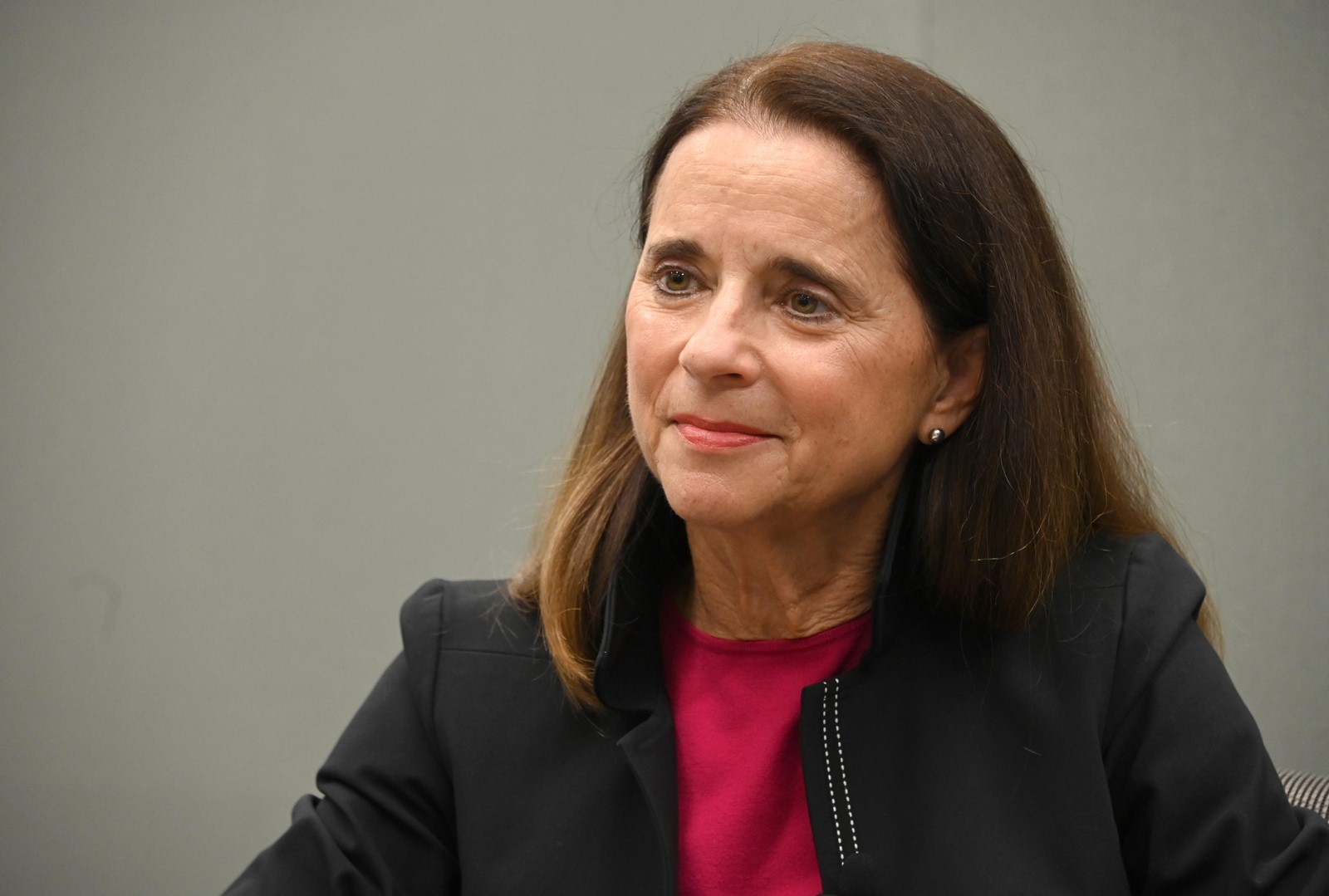 Baltimore mayoral candidate Mary Miller has the money and the time to make the most of how the coronavirus pandemic has turned Baltimore’s campaign season on its head.

As measures to control the spread of COVID-19 forced the delay of the primary to June 2, Miller — initially one of the least known candidates in the Democratic race — became a fixture on the television and video screens of Baltimore voters.

That’s because Miller has an advantage other candidates can’t afford. She’s fueled her campaign with a $1.5 million contribution of her own money, putting her in a unique position to capitalize on the five-weeks-longer campaign and the captive audience of voters stuck inside their homes.

And while she doesn’t have experience running a city, Miller’s resume may be right for the times. A former T. Rowe Price executive with a municipal finance specialty and an alum of Democratic President Barack Obama’s team for recovery efforts from the Great Recession, Miller is running as the pandemic has pushed Baltimore’s finances into the tank. The city faces a deficit next year of more than $100 million.

Still, Miller must clear the hurdle of low name recognition in a crowded field with familiar faces, and as the campaign enters the final stretch, her name has been making headlines for the wrong reasons.

Last week, Miller was forced to disavow the tactics of a political action committee formed in support of her. A memo by PAC treasurer Martin G. Knott Jr., leaked to The Baltimore Sun, discussed the PAC’s strategy of targeting white voters in the majority-black city, hoping to lure them from Miller’s perceived rivals: former state Deputy Attorney General Thiru Vignarajah and City Council President Brandon Scott.

“These are not my values, or the values of those who work with me,” Miller said in a statement. “From Day One, our campaign has been about every Baltimorean — Black, White, Latinx and Asian. We are committed to inclusion, dismantling structural racism, and creating opportunity for everyone.”

News of the memo came less than two weeks after Miller’s campaign circulated the results of a poll commissioned by the PAC. It showed Miller polling among the top candidates at 16%. The PAC disbanded Thursday, with Knott saying it had “become more of a distraction than a help.”

The next few weeks will be the test of whether Miller’s money has been well-spent and if she has convinced Baltimore voters her resume is the right one for the job, said Mileah Kromer, director of the Sarah T. Hughes Field Politics Center at Goucher College.

“She had the advantage that she could spend from March into April, and that increased her name recognition,” Kromer said. “But now, we’re finally getting to see in these waning weeks some of the other campaigns come alive.”

A native of Ithaca, New York, and one of six children of a Cornell University professor, Miller landed in Baltimore in 1983 when she joined T. Rowe Price as a credit analyst. While outnumbered by male colleagues in the financial sector when she started, Miller rose by 1996 to manager of the firm’s municipal bond department. By 2004, she assumed control of its fixed income division, the next rung on the ladder.

In 2009, Miller left T. Rowe Price for a job with the Obama administration, first as assistant Treasury secretary for financial markets and then as undersecretary for domestic finance. Federal officials were grappling with economic recovery efforts from the recession as she arrived. Miller ran programs that assisted cities as they emerged from the downturn and homeowners facing foreclosure until 2014.

Miller credits her work at T. Rowe Price for giving her an intimate look at Baltimore’s finances and infrastructure, and her experience with the Treasury for shaping her views on how government can solve problems in hard times. Emerging from the global financial crisis required people to come together, in spite of their different agendas and ideologies, she said.

“I think what a leader does is gets people to agree on what is the goal,” Miller said. “’What is the problem we’re trying to solve?’ and ‘Let’s find the path there that we can all support — and I’m going to hold you accountable for that.’”

Last month, city financial leaders announced Baltimore faces a $42 million deficit for the remainder of the 2020 fiscal year, and a $103 million hole for 2021. The “knee-jerk reaction” is to cut the budget, Miller said, but the city should instead explore more ways to take advantage of federal aid packages.

“Baltimore should be in front of their delegation in Congress every day, telling the Baltimore story and helping to craft legislation,” she said. “That’s something I think I would be good at ... I’m down in the weeds on these assistance programs.”

Miller’s introduction for many voters came via her TV and video ads, which began running in mid-February, thanks to a substantial $500,000 media buy to start her campaign. She’s spent more than $2 million on the race since.

Spending at that rate — the next-closest candidate is Mayor Bernard C. “Jack” Young who has spent $974,000 since January — put Miller in play. A late February poll for The Baltimore Sun, the University of Baltimore and WYPR-FM showed Miller in fifth place with 7%.

While she trailed Scott and former Mayor Sheila Dixon, the poll had Miller leading Young. It also showed her surging; 67% of who supported Miller had decided within the previous week.

Miller is “absolutely a player,” said Kromer, suggesting Miller has differentiated herself from other well-funded candidates of the past, such as businessman David L. Warnock, who lent his 2016 mayoral campaign nearly $2 million and finished fourth (Miller worked with Warnock at T. Rowe Price and supported his candidacy).

Miller’s high-dollar campaign has faced scrutiny. The state Board of Elections is reviewing a complaint alleging Miller incurred “significant” campaign expenses before filing with the state as a candidate. Miller argues state law allows for “exploratory expenses.”

Miller is among the candidates who have released their tax returns during the 2020 campaign. Along with her husband, Miller made at least $3.8 million in income annually from 2014 to 2018. Much of that was earned through capital gains — the increase in value of an asset realized when it is sold. Of the $7.3 million the couple earned in 2018, $5.2 million was amassed via capital gains.

The Millers live in Guilford, one of the city’s affluent neighborhoods. Miller also owns a home in the Bahamas, according to a financial disclosure form she filed with the city.

Kromer acknowledged some might consider a well-to-do lifestyle a drawback for a mayoral candidate in Baltimore, where the Census Bureau estimated per capita income at $29,700 in 2018. But Kromer said Miller isn’t making her case to voters using a personal narrative. Instead, her mailings tout her leadership in the private sector and the vetting she received when she was confirmed by the U.S. Senate for the Treasury jobs.

“She might not come across as a dynamic personality, but this is clearly an accomplished person,” she said. “It’s going to depend on whether Baltimore voters think this skill set is what the city needs.”

Miller’s pitch ties her to Obama’s administration, although he has not endorsed her. Photos of her with the first African American president are featured frequently in the ads and on glossy mailers. Matthew Crenson, professor emeritus of political science at Johns Hopkins University, said he sees Obama’s presence in those materials as a play for black voters, at least as much as it is a nod to her experience.

Crenson questioned whether that would be enough to boost Miller, the only white candidate among the top contenders in the race.

In a city where 62% of residents are black, Miller needs a major African American leader’s endorsement, he said, citing the late Del. Howard “Pete” Rawlings’ pivotal 1999 backing of mayoral candidate Martin O’Malley. O’Malley, a white Democrat, was elected that year. Looking at the field of prominent African American candidates this year, that will be a tough endorsement to find, Crenson said.

“If the outcomes were clearer, fewer candidates, the polls more consistent, somebody might be able to do that,” he said. “But uncertainty is one of the central characteristics of this election.”