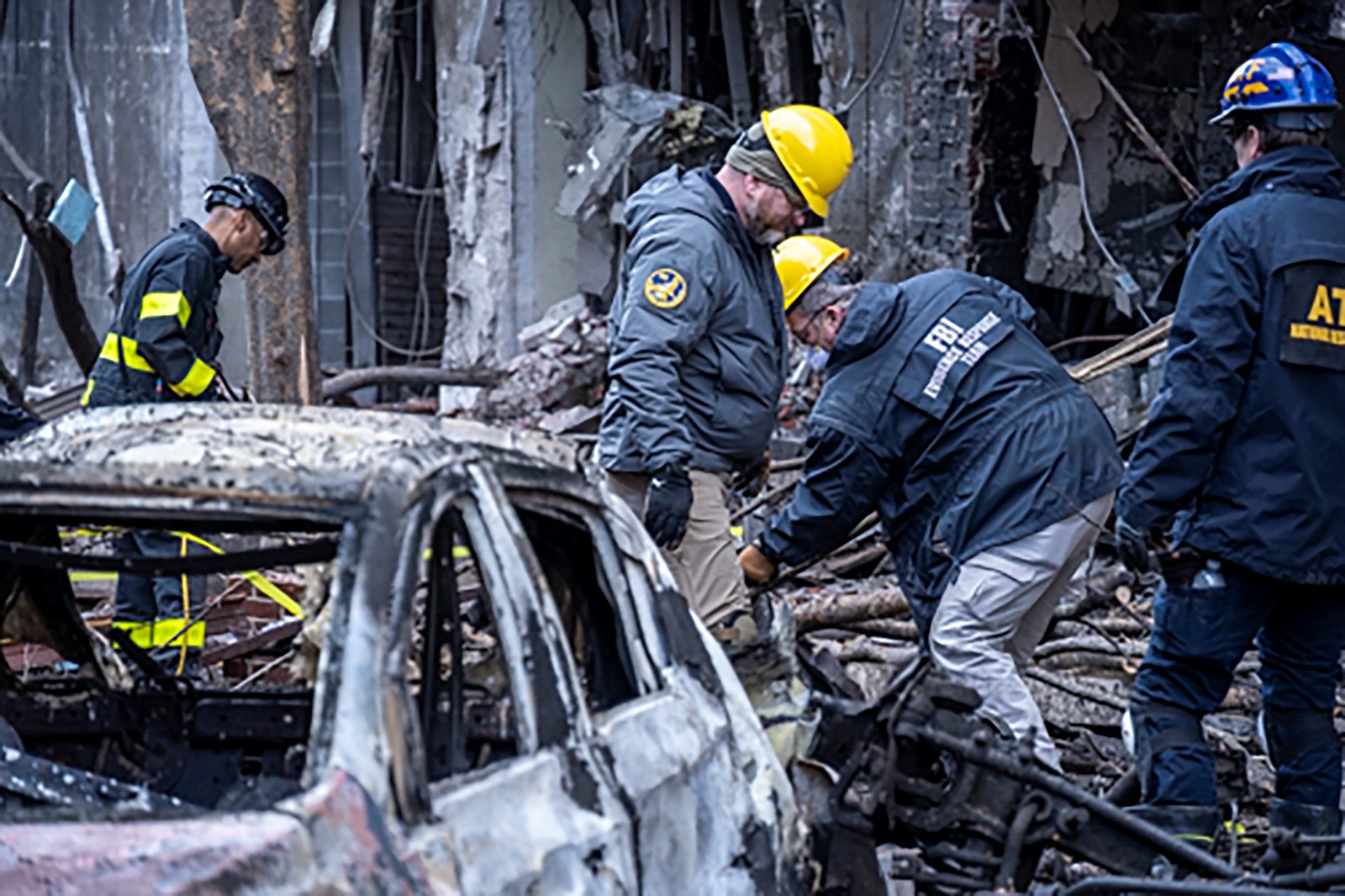 Evidence response teams from the FBI and Bureau of Alcohol, Tobacco, Firearms and Explosives process the scene of the Christmas Day blast in downtown Nashville. FBI/ATF
PREVIOUS IMAGE

The Christmas Day bombing in downtown Nashville led to phone and data service outages and disruptions over hundreds of miles in the southern U.S., raising new concerns about the vulnerability of U.S. communications.

The blast seriously damaged a key AT&T network facility, an important hub that provides local wireless, internet and video service and connects to regional networks. Backup generators went down, which took service out hours after the blast. A fire broke out and forced an evacuation. The building flooded, with more than 3 feet of water later pumped out of the basemen; AT&T said there was still water on the second floor days later.

The immediate repercussions were surprisingly widespread. AT&T customers lost service — phones, internet or video — across large parts of Tennessee, Kentucky and Alabama. There were 911 centers in the region that couldn’t take calls; others didn’t receive crucial data associated with callers, such as their locations. The Nashville Police Department’s phones and internet failed. Stores went cash-only.

At some hospitals, electronic medical records, internet service or phones stopped working. The Nashville airport halted flights for about three hours on Christmas. Rival carrier T-Mobile also had service issues as far away as Atlanta, 250 miles southeast, because the company uses AT&T equipment for moving customer data from towers to the T-Mobile network.

“People didn’t even realize their dependencies until it failed,” said Doug Schmidt, a Vanderbilt University computer science professor. “I don’t think anyone recognized the crucial role that particular building played” in the region’s telecom infrastructure, he said.

The explosion, which took place in the heart of the Nashville’s historic downtown, killed the bomber, injured several people and damaged dozens of buildings. Federal officials are investigating the motive and haven’t said whether the AT&T building was specifically targeted.

AT&T said 96% of its wireless network was restored Dec. 27. As of Monday evening, AT&T said “nearly all services” were back up. On Wednesday, it was “activating the last of the remaining wireline equipment.”

AT&T said it sent temporary cell towers to help in affected areas and rerouted traffic to other facilities as it worked to restore power to the Nashville building . But not all traffic can be rerouted, spokesperson Jim Greer said, and there was physical equipment that had to be fixed in a building that was part of an active crime scene, which complicated AT&T workers’ access.

“We are all too dependent on phone, cellphone, TV and internet to have outages for any reason,” Rep. Jim Cooper, the Democrat who represents Nashville in Congress, said in an emailed statement Wednesday.

Cooper said the U.S. “needs to harden our telecom facilities so we have greater redundancy and reliability” and called for congressional hearings on reducing telecom vulnerabilities.

The impact on emergency services may have raised the most serious flags. At one point, roughly a hundred 911 call centers had service problems in Tennessee alone, said Brian Fontes, head of the National Emergency Number Association. A 911 call center should still be operational even if there is damage to a phone company’s hub, said David Turetsky, a lecturer at the University at Albany and a former public safety official at the Federal Communications Commission. If multiple call centers were out of service for several days, “that is of concern,” he said.

“Avoiding single points of failure is vital for any number of reasons, whether it has to do with physical damage, human error, hostile action or any of the above,” Turetsky said. “We need our networks to be resilient regardless of earthquake, tornado, terrorist, cyber attacker or other threat.”