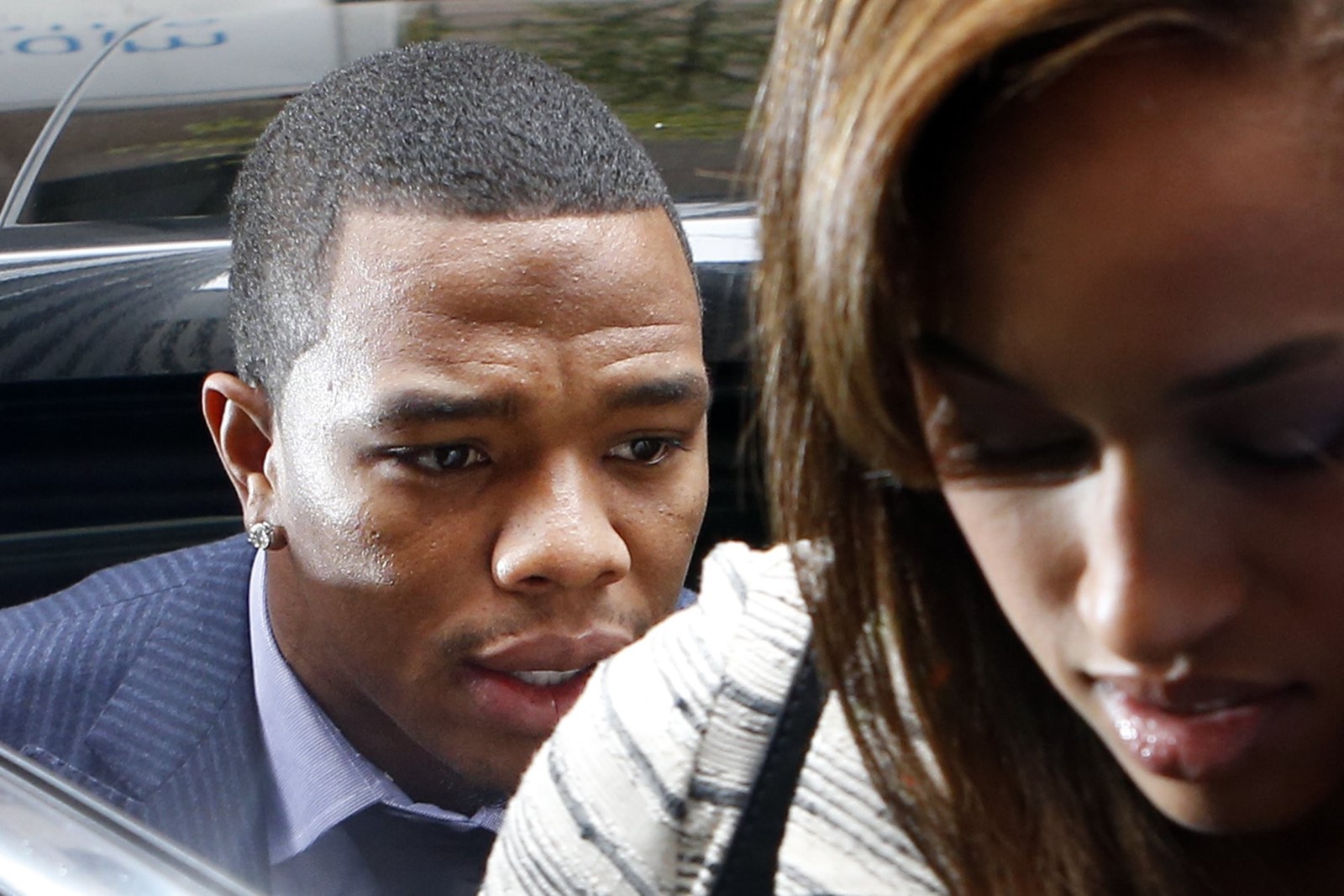 Ray Rice, arriving with his wife, Janay, for an appeal hearing of his indefinite suspension from the NFL in New York in 2014, was a fan favorite in Baltimore before being released in the wake of his domestic abuse incident. (Jason DeCrow/Associated press ) 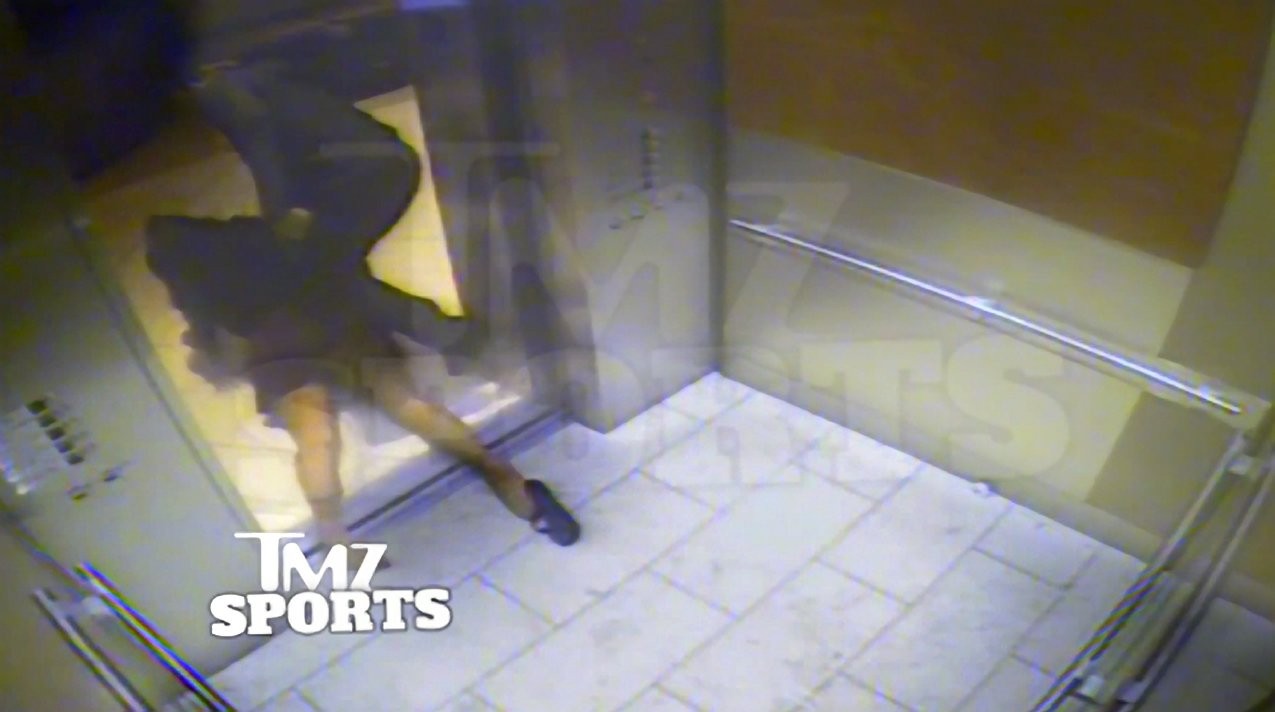 A frame grab from a video obtained by TMZ Sports showed Ray Rice in an altercation with his then fiancee, Janay. (TMZ/Baltimore Sun )
PREVIOUS IMAGE

he details were scarce at first.

We knew that Ray Rice, one of the most popular and image-conscious players on the Ravens, and charged with simple assault after an alleged early-morning exchange of blows with his fiancée at the Revel Casino in Atlantic City. His attorney described the incident between Rice and Janay Palmer, who’d also been arrested and charged with assault, as a “very minor physical altercation.”

It was the day after Valentine’s Day 2014. Few foresaw the storm that had been set in motion.

We were still almost seven months from seeing the video — The image, more than anything, would force the NFL, the Ravens and a nation of football fans to reckon with the ugly reality and daunting prevalence of intimate partner violence. It would make Rice an instant pariah from the sport that brought him wealth and admiration.

“The real change maker in this situation was the video,” said Sandi Timmins, executive director for House of Ruth Maryland, which works against intimate partner violence with an array of support and training programs and has partnered with the Ravens since 2014. “The accusation was out there, but the public had a hard time reconciling it with this person that they admired, that they liked. They couldn’t fit it together, so denial comes forward. And that has always been the thing we are up against. But when the video came out, there was no question that this thing happened. You could see it. … It was an awakening, I think.”

Five years from the day of that punch, many things have changed. The NFL has instituted pre-emptive training programs for its players and team employees and has enforced stricter penalties for abusers. The Ravens have avoided drafting players with histories of violence against women and have supported local nonprofits that aid and shelter victims. Rice has recast himself as a spokesman against partner violence, trying to help other athletes avoid the terrible mistake he made.

But many harsher realities around intimate partner violence have not changed. It’s still an epidemic that affects one in four women in this country. The NFL still faces difficult questions about inconsistent suspensions handed out to perpetrators and about draft picks and free-agent dollars spent on players with violence in their immediate backgrounds. Experts on partner violence have criticized the NFL Players Association for moving sluggishly on prevention efforts.

Just last season, the Ravens encountered a dilemma when they chose to stand by cornerback Jimmy Smith, who’d been suspended four games because of emotionally abusive and threatening behavior toward the mother of his son. Earlier this week, many football fans cringed when the Cleveland Browns signed running back Kareem Hunt, who’d been released by the Kansas City Chiefs in November after TMZ Sports posted video of him shoving and kicking a woman in a Cleveland apartment building.

Though everyone involved acknowledges there’s much work left to be done, NFL and Ravens officials say Rice’s case prompted a sea change in the league’s understanding and handling of intimate partner violence.

“We are a very different organization than we were five years ago,” said Anna Isaacson, the NFL’s senior vice president of social responsibility. “We are a more knowledgeable organization, and we’ve spent an unbelievable amount of time diving into issues of domestic violence and sexual violence. It’s not a secret that was born out of a really tough time in our history.”

Critics, however, say the NFL undercuts its message when teams sign players such as Hunt. “The message this sends is that money matters more than women,” Toni Van Pelt, president of the National Organization for Women, told NBC News. “Women don’t matter to the NFL, which is rather surprising because they’re a big part of the viewer audience.”

The Ravens released Rice on Sept. 8, 2014, the same day TMZ posted video of him punching Palmer, whom he’d married in March of that year. He spent the next few years training for a potential return to the NFL but eventually accepted that the opportunity would not come.

Instead, he’s accepted his role as the face of a troubling issue and spends much of his time speaking to amateur and professional athletes — including Ravens rookies each of the past three summers — about that February morning, five years ago.

“I hate that person,” the former Baltimore Ravens running back told . “I hate him. … Somewhere down the line, everybody who’s saying, ‘Does he deserve a second chance for football?’ And this, that and the other — I actually got my second chance.”

Rice, 32, did not respond to several requests for an interview, but his message in recent years has been consistent — athletes (and other young men) must confront their own emotions and the hidden damage in their past to avoid hurting others.

“One of the underlying issues for me was — I never wanted to ask for help,” he said in the CBS interview. “Football, for me, was my counseling. It was my therapy. It was my psychologist. It was my everything.”

Ravens president Dick Cass said the team’s rookies have benefited from hearing Rice’s story, which he has also shared as part of league-wide educational initiatives.

“Ray, as a former player, brings a lot of credibility and knowledge, along with an important cautionary message,” Cass said. “When he speaks, our players listen.”

Cass said that even though individual cases have been complicated, the NFL has deepened its investigations — independent of law-enforcement agencies — and improved coordination with the teams involved.

He called Rice’s case a “defining moment” in prompting those improvements.

“I know when an NFL player is involved in a domestic-violence situation, it gains a lot of notoriety,” Cass said. “So to the public, it’s going to look as though NFL players are more likely to get involved in domestic violence than the general population. I don’t think that’s true at all; our players are less likely to become involved in domestic violence than the general population. It’s a national problem … but it’s a problem in the NFL, and I think we’ve become a leader in how to deal with it, how to educate our players and the rest of our workforce about it. We need to continue that leadership role, and I think we will.”

The NFL argues its training and disciplinary changes have worked. Incidents that led to a player’s arrest — these include drug-possession and drunk-driving cases — dropped from 68 in 2014 to 37 in 2018.

Even before the video of Rice punching Palmer was published, NFL commissioner Roger Goodell said he “didn’t get it right” by suspending the Ravens running back just two games. In late August 2014, the league announced stiffer suspensions for abusers — six games for a first offense and a lifetime ban (with a chance to apply for reinstatement) for a second.

Timmins has never chosen to dwell on individual punishments in assessing the NFL’s response to intimate partner violence. “The good news is that people are talking about it, they’re having conversation around whether this is the right thing to do,” the House of Ruth executive director said. “What I would like to see in these situations is not reward and punishment but people being helped to change their behavior. Rather than the focus being on whether or not the judgment was correct, I would much rather see our society insist the individual go through programs like the ones we have, to unlearn these behaviors and learn how to have healthy relationships.”

The attention on discipline has often overshadowed the efforts of which the NFL is proudest — the training programs it has instituted for players and staff members and the financial support it has offered to organizations such as the National Domestic Violence Hotline and the National Sexual Violence Resource Center. Every year during Super Bowl week, the league hosts a celebration of workers and volunteers who staff shelters and lead prevention efforts.

“My response is that we’re a much more enlightened and educated league,” Isaacson said. “Culture change takes a long time, and we’re on that road. … When there’s an issue that arises, it’s unacceptable, but it doesn’t take away from all the work we have done over the last five years. I think what it shows is that domestic violence is still happening, and it’s happening all across our society still. It’s not a problem that has been solved.”

The NFL Players Association announced its own effort in 2014, creating a commission of experts to study and counteract partner violence in the league. Four years later, however, two members of that panel — Georgetown University law professor Deborah Epstein and former National Network to End Domestic Violence president Susan Else — resigned, citing a lack of substantive follow-through on their recommendations.

“When I was asked to join the commission, I told NFLPA executive director DeMaurice Smith that I was leery of associating with an organization that might just be paying lip service to the defining issue of my career — so that, in essence, the NFLPA could say it was confronting domestic violence abuses long enough for the Rice story to fall out of the news cycle,” Epstein wrote in a June 5 op-ed for The Washington Post. “Smith assured me, repeatedly, that this commission would be a serious working group and that our efforts would help produce necessary reforms. But clearly that has not been the case.”

After the NFL announced its suspension of Rice but before the Ravens released their star running back, Cass reached out to Timmins in hopes of better understanding intimate partner violence.

Their conversations led to a formal three-year partnership, which included $600,000 in donations and a series of promotional and fundraising efforts by the Ravens and annual training programs conducted by the House of Ruth. The Ravens renewed that partnership for another three years in 2017 and committed another $600,000, while also establishing a relationship with the One Love Foundation, created in the name of Baltimore-born lacrosse player Yeardley Love, who was murdered by her ex-boyfriend at the University of Virginia. The Ravens’ annual $200,000 donations have helped the foundation launch education programs on intimate partner violence at local colleges and high schools.

Cass and Isaacson both said persistence will be the key as the NFL tries to build on its response to the Rice situation. “You have to keep talking about these issues,” Isaacson said. “They’re issues that often and easily fall back into the dark, that used to be seen as private in families. If you don’t talk about them and you don’t continue to educate over and over again, missteps will happen. … We need to keep going.”