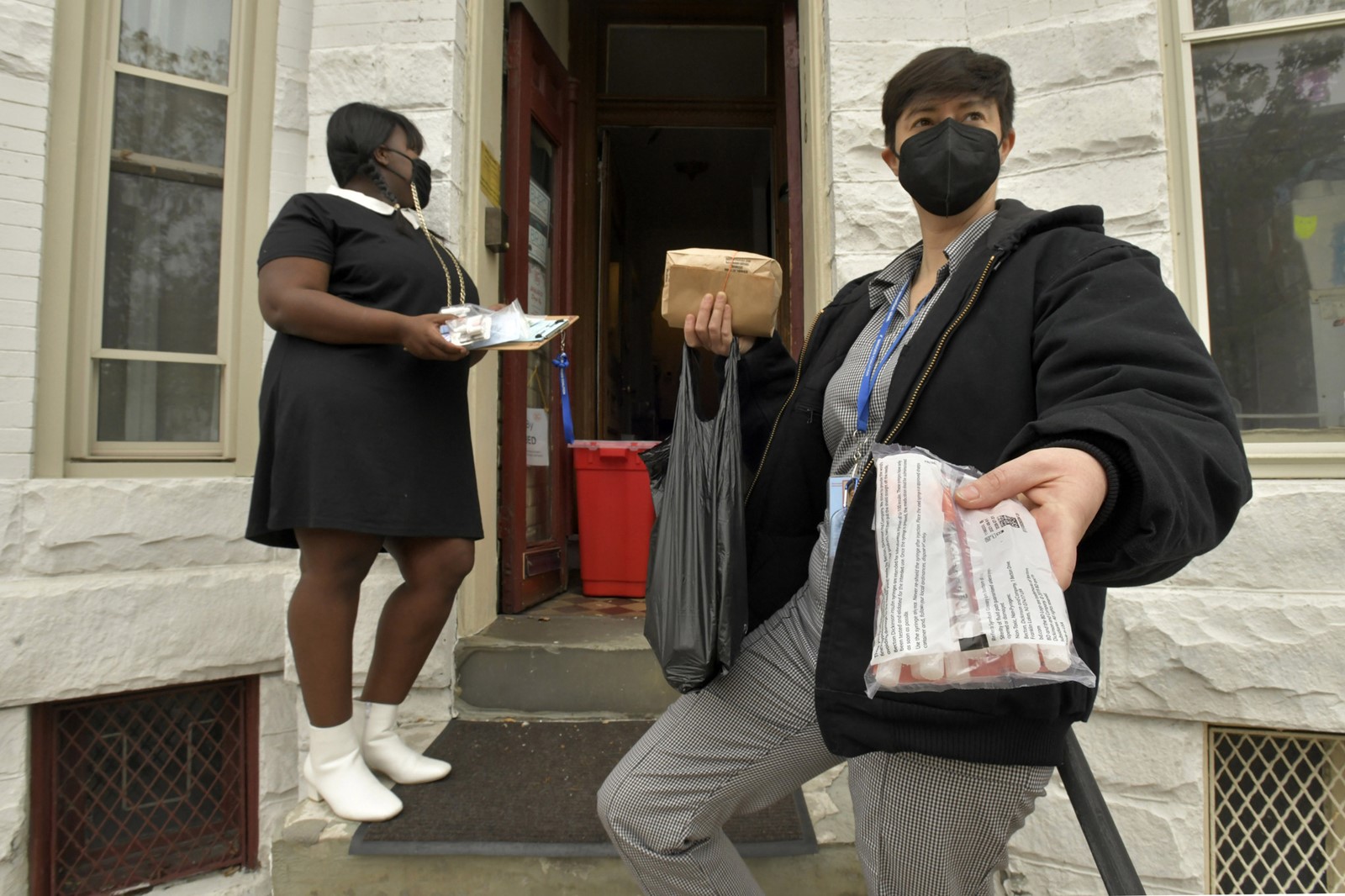 Harriet Smith, director of education/services at the Baltimore Harm Reduction Coalition in Charles Village, holds a bag of syringes to give to clients as a public health measure. Cam Kerr, the community outreach coordinator, is at left. The state has 16 certified programs that hand out needles, syringes, straws and single-use, spoonlike cookers to people who use drugs. Amy Davis/Baltimore Sun
PREVIOUS IMAGE

When state lawmakers return to Annapolis for a special legislative session next month, they’ll face a question that has vexed some of them: Should they decriminalize needles, syringes and other supplies used by people who use drugs?

A majority of lawmakers approved a bill last spring that removes certain supplies from the list of banned drug paraphernalia in Maryland. But it was not approved by a big enough margin to ensure the legislature could overturn the veto from Gov. Larry Hogan that came soon after.

Those who work to help people who use drugs have been writing letters, making phone calls and posting on social media in hopes of drumming up support to overturn the veto.

“Science has confirmed this is a chronic, relapsing disease. We need to be more compassionate and treat people with dignity,” said Liz Bement, whose son, Alex Bement, died from an overdose in 2019. “Criminalizing paraphernalia is one way to push the people suffering from addiction further into the shadows.”

Bement works with a nonprofit, Love in the Trenches, that supports people with loved ones who have substance use disorder. Treating people who use drugs as criminals “keeps that cycle of shame and stigma going,” she said.

Maryland has gradually taken steps away from the “war on drugs” approach to addiction and the use of illegal drugs. The state has lessened penalties for many drug-related crimes while putting a greater emphasis on treatment and what’s known as “harm reduction” — keeping people who use drugs as safe and healthy as possible.

The state has 16 certified programs that hand out needles, syringes, straws and single-use, spoon-like cookers to people who use drugs. Clients of the programs are given a card to show any police officer they encounter that is supposed to keep them from being arrested.

But those cards are often lost or misplaced, and even with them, people still fear police interactions, advocates say. That’s why they believe it’s a better policy to allow anyone to carry the supplies without legal repercussions.

A policy note on the legislation said the Maryland State Commission on Criminal Sentencing Policy reported that during fiscal year 2020 in the state’s circuit courts, “11 individuals were sentenced to 11 total counts of possession or distribution of controlled paraphernalia” and three people “were sentenced to four total counts of a subsequent offense of use or possession with intent to use drug paraphernalia.”

Possession of drug paraphernalia is a misdemeanor punishable by up to four years in prison and a fine of up to $25,000.

Gudlavalleti said the shame and fear of having drug supplies have multiple dangerous results: People use drugs alone, where no one is able to help them in the event of an overdose. Or they ditch their needles right after using them, leaving them in parks, alleys and other public places. Sometimes they’ll share needles, risking the spread of HIV and other illnesses.

And when people using drugs encounter police, they might lie about having needles on them, subjecting an officer to the risk of accidentally being stuck.

The Baltimore Harm Reduction Coalition travels to different parts of the city, handing out not only “safer use” drug supplies, but also doses of the overdose-reversal drug naloxone, hygiene supplies, condoms, snacks and, in the winter, sleeping bags and tents. They’ll help people get into treatment, if they meet someone who asks for that.

In Baltimore, there’s a policy not to prosecute people for possession of drug paraphernalia, whether they participate in a “syringe services program” like the Baltimore Harm Reduction Coalition or not. Baltimore State’s Attorney Marilyn Mosby wants that policy put into law and applied to the rest of the state, too.

At a time when 100,000 Americans are dying from overdoses per year, Collins said it’s important to look at other methods of attacking the drug problem than arresting and jailing people who use drugs.

From April 2020 to April 2021, overdose deaths rose in Maryland by more than 21%. In Baltimore alone, more than 26,000 people a year receive substance use disorder services.

“We can’t continue on the same path. We need new and innovative drug policies,” Collins said, adding that the paraphernalia decriminalization bill is “a step toward a saner approach” to drug use.

Not everyone is convinced that making it OK to carry syringes and other tools for drug use is the best way to attack the problem. The final votes in the General Assembly were 95-38 in the House of Delegates and 28-19 in the state Senate.

During the Senate debate in the final hour of the legislative session in April, a couple of lawmakers raised concerns that the change in law would allow drug dealers to keep and distribute large supplies of syringes and supplies to their customers. They wondered whether dealers might steal medical supplies to offer them to customers as an added service.

“It’s actually breathtaking in the middle of a situation where overdoses are rising that this is a bill we are passing,” Sen. Justin Ready, a Carroll County Republican, said during the debate.

The Maryland Chiefs of Police Association and the Maryland Sheriffs’ Association also argued in written testimony that the bill could cause overdoses to rise. Decriminalizing paraphernalia would mean fewer people entering court-affiliated treatment programs as an alternative to criminal prosecution, the law enforcement organizations wrote.

Hogan, in his veto letter, wrote that the measure “is a dangerous bill that completely erases the illegality of certain controlled dangerous substance paraphernalia.”

“This is an ill-advised policy change that does nothing to remove drug dealers from our streets or reduce opioid-related fatalities,” the governor wrote, “and instead encourages the use and possession of paraphernalia associated with drug use.”

Hogan echoed the concerns that drug dealers would “stockpile” paraphernalia and sell it to users of drugs. The governor said there is a valid argument for ensuring syringe distribution programs can operate safely, “but that is not this bill.”

The sponsors of the bill think there’s been bad information put out about what it does, whether through misunderstanding or willful misinformation.

“This is a minuscule step in the direction of reversing the harm of the failed ‘war on drugs’ and reversing mass incarceration,” said Sen. Jill P. Carter, a Baltimore Democrat and primary sponsor. “There’s a lot more that needs to happen. This is a baby step in that direction.”

Carter said she was surprised that opposition emerged “at the eleventh hour” because the bill had broad support from doctors and addiction experts. A hearing on the bill in the Senate elicited no opposition.

Del. David Moon, a Montgomery County Democrat who sponsored the bill in the House, said the measure would correct an oversight from a few years earlier. When the state passed a sweeping, bipartisan reform bill called the Justice Reinvestment Act, many sentences and penalties were reduced for a variety of crimes, particularly drug offenses. But lawmakers didn’t reduce penalties for enough types of paraphernalia, Moon said.

Moon suggested that arguments against the bill are “disingenuous” and in “bad faith.”

Moon and Carter are confident that when lawmakers face this bill again when they convene a special session Dec. 6, the votes will be there to overturn the veto.

Lawmakers are being called back into session to approve new lines for the state’s congressional districts, but they’ll also consider dozens of vetoes from Hogan, from the paraphernalia bill to measures restricting the state’s involvement in immigration enforcement and boosting funding for mass transit improvements.

Carter still finds it hard to believe the paraphernalia bill ended up in a precarious situation: “This bill should have been a no-brainer,” she said.