Richard Isaac, left, and Basdeo Deonanan prepare to bolt into place a plaque outside the Carroll Park Golf Course clubhouse to honor the successful fight to integrate the course. The plaque will be unveiled Tuesday. Amy Davis/Baltimore Sun 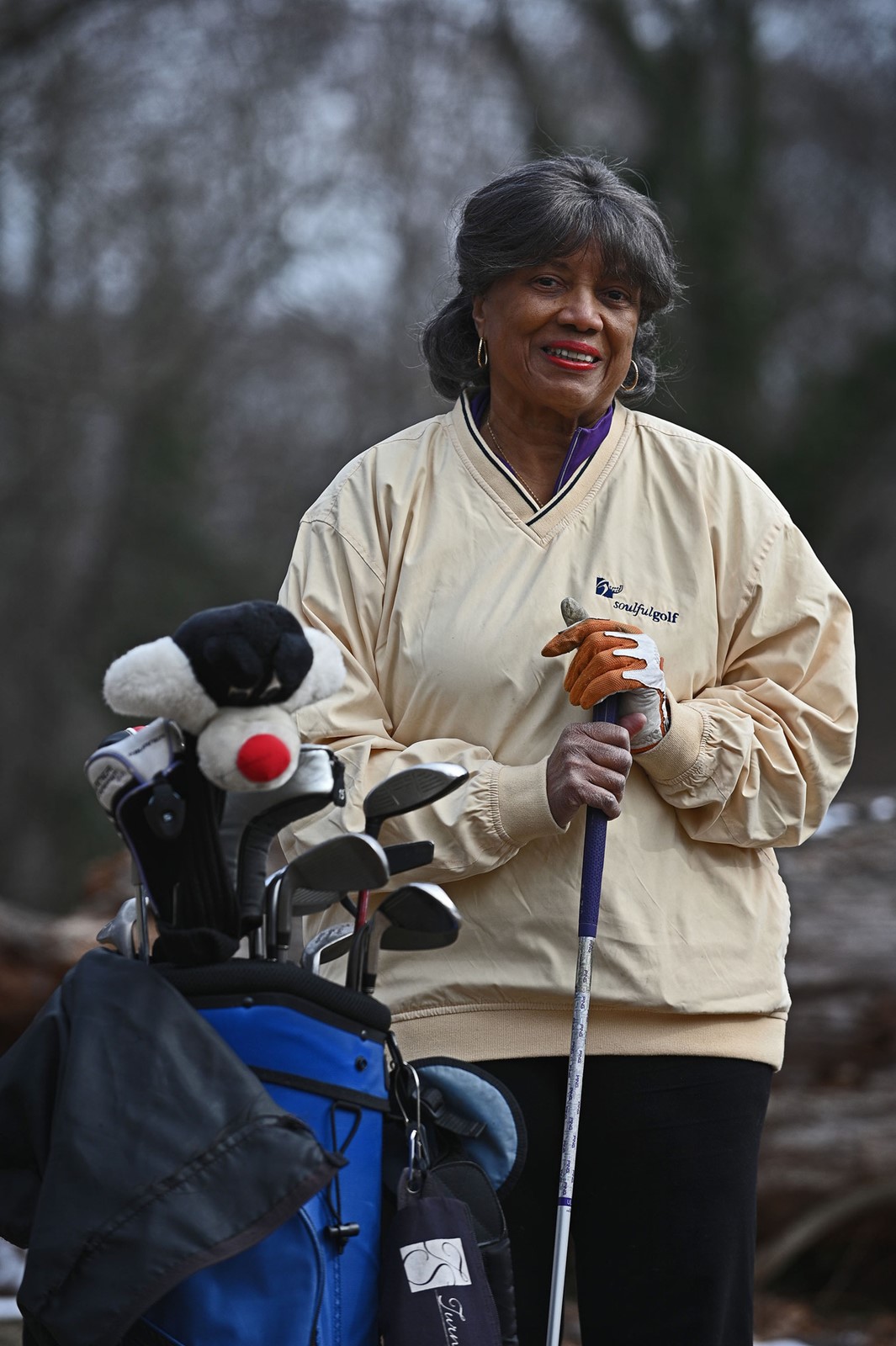 Brenda Goburn Smith, a member of the Pitch and Putt Golf Club of Baltimore, leads the club’s monument committee, which is dedicating a monument to commemorate the history of Black golfers at Carroll Park. Kenneth K. Lam/Baltimore Sun
PREVIOUS IMAGE

A golfer for the past 20 years and a Baltimore resident for even longer, Brenda Goburn-Smith played Carroll Park Golf Course several times before she became aware of the property’s key role in the city’s march toward desegregation.

Although Carroll Park was the only course open to Black golfers in the 1930s, 1940s and 1950s, the absence of other options spurred legal action and protests that finally forced Baltimore officials to make its golf courses, baseball fields, swimming pools and other public recreational facilities available to all people of color.

“I was not expecting to find all that I discovered,” Goburn-Smith said. “That was intriguing.”

Goburn-Smith and others like her are ensuring Carroll Park’s contribution to the civil rights movement is not forgotten. The Pitch and Putt Golf Club of Baltimore — the second-oldest Black women’s golf organization in the country, of which Goburn-Smith is one of 33 members — will dedicate a monument to commemorate the history of Black golfers at Carroll Park at 11:30 a.m. Tuesday.

The monument, which greets visitors before entering the clubhouse, is a 4-foot-tall, 3-foot-wide brick pedestal with a cement collar and a bronze plaque that reads:

“Carroll Park Golf Course, a city-owned course, was purchased in 1923 for White golfers only. A group of avid African American golfers challenged the city for access through several legal actions. After much persistence, these golfers gained full access. They were catalysts for opening dialogue with elected officials that resulted in the city of Baltimore granting open access to all public recreation facilities. Around 1938, the Pitch & Putt Golf Club of Baltimore, an African American women’s golf club, was established at the course.”

A wall display inside the clubhouse will feature a timeline of the events that led to the desegregation of golf courses and other recreational venues in the city. Tuesday’s dedication is the culmination of four years of work by the Pitch and Putt Golf Club, which funded the monument’s $10,000 price tag with golf tournaments and private donations.

“I just can’t believe it,” club president Stephanie Williams said. “I know that Brenda’s heart is going to swell because mine surely is. I can’t believe we’ve come to this point that we can really have a physical, tangible monument to celebrate the legacy of our golf club.”

Tom Pierce, executive director of the Baltimore Municipal Golf Corp., which oversees the courses at Carroll Park, Clifton Park, Forest Park, Mount Pleasant and Pine Ridge also known as the “Classic Five,” said the tribute is an important reminder of what he called a “mind-boggling” part of the course’s history.

“It’s not just about golf,” he said. “This is something where golfers at one of

our courses changed history in a positive manner. This is something that we don’t think many people know about. So that’s why we thought this needs to have something that anybody who comes to play at Carroll Park can read about it and know about what the people who played the same course did.”

The genesis for the project — which began in 2018 as a way to celebrate the Pitch and Putt Golf Club’s 80th anniversary — started when Goburn-Smith was introduced to a paper written by a student pursuing his master’s degree at Ohio University. As part of the university’s Baltimore Ecosystem Study, Jim Wells was researching how parks and urban green space help communities when he found an article containing one line stating that nine-hole, 65-acre Carroll Park in the Pigtown community was essential in the desegregation of recreational facilities in Baltimore.

Wells, the primary author of “Separate but Equal? Desegregating Baltimore’s Golf Courses,” which was published in 2008, said Carroll Park, like every other golf course in the city, was off-limits to Black golfers until 1934 when it fell under the nation’s “separate but equal” policies at the time.

“Nothing that was ‘separate but equal’ was actually equal,” said Wells, who is now park manager at Goblin Valley State Park in Green River, Utah. “In the case of Carroll Park, it was only nine holes, it was sand greens, there was industrial waste just everywhere, and it was no surprise that was the one that was handed to people of color. So what Carroll Park became then was a microcosm of the way African-Americans were treated by the ‘separate but equal’ law.”

Baltimore officials tried to placate Black golfers by allowing them to play on Mondays, Wednesdays and Fridays despite the fact that many of those golfers had to work on those days. On the rare occasions they could play, they had to deal with the indignity of a substandard course.

“One of the sadder things I heard during my research was the African American golfers had leagues throughout the East Coast, and they would invite teams down from New York and Philadelphia, which were fully desegregated, and they had to golf on the worst course,” Wells said. “It was an embarrassment both for those clubs and for the city to be segregated that way. Others were progressing, but Baltimore was not.”

Legal action forced officials to begin renovations at Carroll Park, but the cost became so excessive that by 1951, all courses were opened to golfers regardless of race.

“Eventually they just decided, ‘We can’t afford this,’ and even when they improved the nine holes, all of the golf courses were desegregated due to the battle at Carroll Park,” Wells said. “And then after that, other facilities like ball fields and swimming pools were all desegregated as a result of this battle.”

Before desegregation, Black golfers had to travel to Philadelphia or Washington to play. Others who couldn’t make those trips could stick around the game by caddying for white customers.

“You didn’t have a place to practice, you didn’t have a place to play,” Williams said. “The only time you could get a chance to play was to be a caddie because you got a chance to hit around after your work was done for the day. So it was really difficult, but it was a game that they loved. So they continued to try to get access to these places or just play a round wherever they could.”

Despite the barriers, Black golfers flocked to Carroll Park. Goburn-Smith — who chaired the Pitch and Putt Golf Club’s monument committee along with Penny Taylor and Shirley Marcus Buckner — said prominent local business owner Willie Adams played there frequently and would often invite former world champion boxer Joe Louis to join him for a round.

Pierce said he hopes future Carroll Park golfers take the time to learn a little history about these golfers who stood up against something that wasn’t right and created positive change.

“And it wasn’t something that happened overnight,” he said. “That’s many years of struggle that we want people to know about.”

Wells said he is honored that his paper served to fuel the project.

“Any academic you talk to is going to be really happy when they hear that they pulled a piece of history, and they wrote about it, and it’s an interesting story, but when a community sees that and it means something to them at the ground level, that’s your dream,” he said. “That’s what you always want to hear, that it’s more than just an academic project, that you’re actually impacting the community.”

Goburn-Smith said it is no coincidence that the Pitch and Putt Golf Club chose to commemorate Carroll Park’s history on Feb. 1, the start of Black History Month.

“It is gratifying to have an idea actually manifest itself into reality,” she said. “It’s going to be something that you can see and touch. And people will remember it. They might not remember me, but they will remember the monument.”