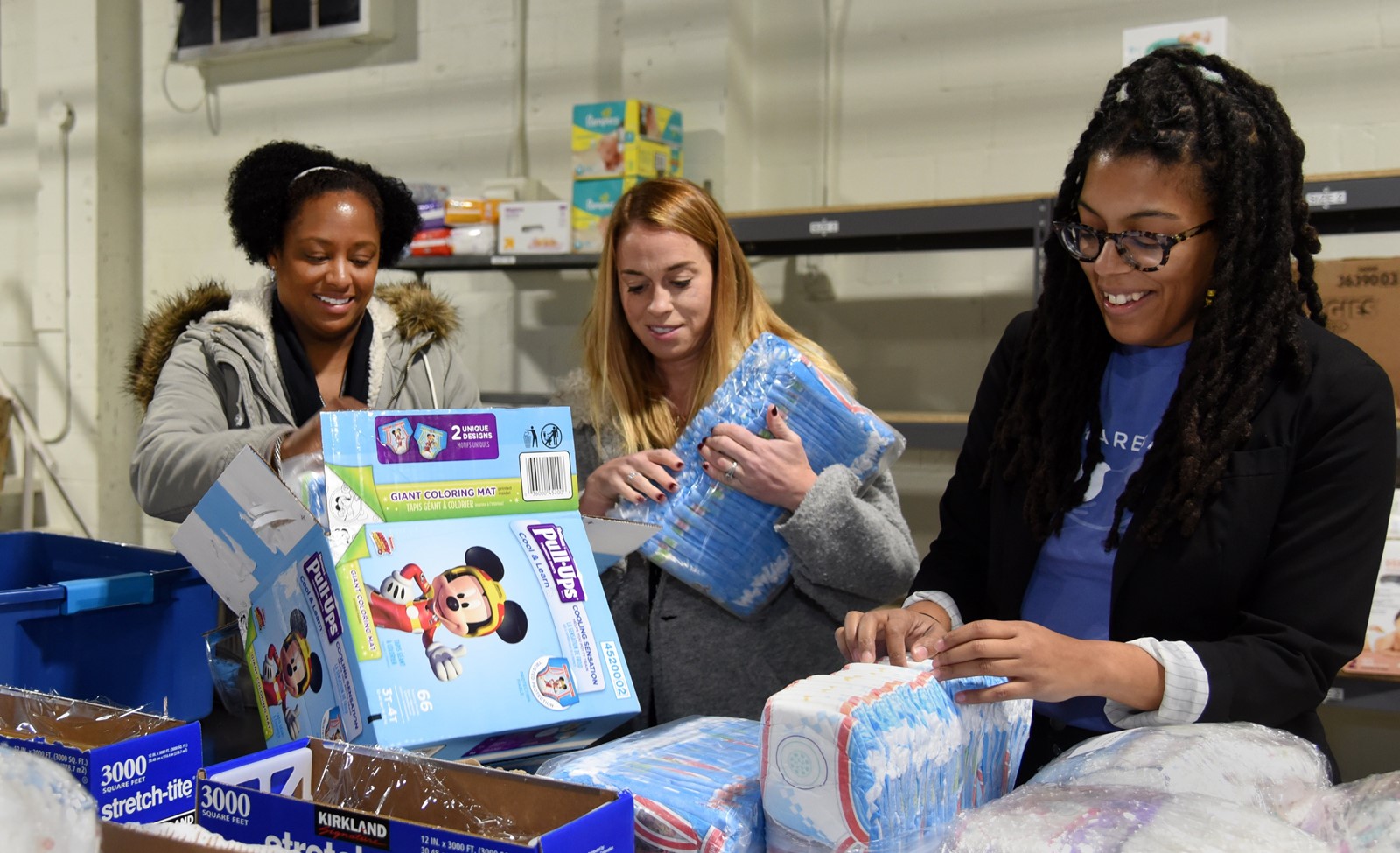 From left, Janelle Schmidt, Jen Fox and Eliseba Osore pack diapers for distribution at ShareBaby, the city’s only diaper bank. Schmidt and Fox are volunteers and board members; Osore is the program manager. (Barbara Haddock Taylor/Baltimore Sun )
PREVIOUS IMAGE

Inside a sprawling Clipper Mill warehouse, Tammi Hobson waited to pick up the latest assortment of diapers, wipes and clothing for moms living in poverty, all items they’ll need for their babies that public assistance typically doesn’t cover.

Nearby, a group of ShareBaby workers wrapped bundles of diapers and sorted donations on a recent day to hand off to Hobson and others waiting to take them on behalf of families in need. The items are the first toward the nonprofit’s goal for 2019 of giving away a million essential baby items.

“That’s the main thing for our families — diapers,” said Hobson, who works at a child care and community center at the Dorothy I. Height Elementary School in Reservoir Hill. “Our families, they have to decide whether they . To be able to contact ShareBaby and say, ‘We need diapers, wipes, formula, if you have it,’ and to be able to come here and pick up these items is awesome. We’re here every week picking up items.”

is believed to be the city’s first diaper bank, one of more than 200 that operate across the country, and Executive Director Amina Osman Weiskerger said its efforts have an outsize effect: If a child doesn’t have enough clean diapers, a rash can turn into serious infection. If parents don’t have enough diapers, many day care centers won’t allow their children to stay and they can end up missing work or school. And the stress of not having enough diapers is a leading cause of depression and mental health issues for mothers.

The 4-year-old nonprofit also runs a pantry for baby items and collects gently used highchairs, strollers, portable cribs and playpens and clothing for newborns through age 5.

But, for many, diapers are their foremost need, Weiskerger said. Benefits such as food stamps cover formula but do not cover diapers. Infants and toddlers use eight to 12 diapers a day, costing as much as $100 a month or more, Weiskerger said. Some mothers try to stretch their supply by leaving them on their child longer than they should, or even bleaching them to try and clean them to use again.

Rachel Hudson, of Edgewood, said her 2-year-old son had been recovering at Mount Washington Pediatric Hospital from a traumatic brain injury — and she was stressed about how to pay for the diapers he needed. Expenses were mounting, her husband was out of work and she couldn’t hold down a job and care for her child. She was talking to a social worker at the hospital about their hardships, when the woman told her about ShareBaby and how it could help.

“It wasn’t a little thing; it was a huge thing,” Hudson said. “With the limited money we had coming in, I didn’t have money for diapers. And the other little things you got with it, the wipes, the clothing, it was saying, ‘Someone does care.’”

Now 4, her son is being potty trained, but ShareBaby gives the family training diapers for him, Hudson said.

Besides Mount Washington Pediatric Hospital, ShareBaby works with nearly 40 Baltimore-based groups to funnel items to their clients. The group works withhomeless and domestic violence shelters, other hospitals and community centers, including all of the city’s Judith P. Hoyer Early Child Care and Family Education Centers, known as Judy Centers. With ShareBaby gathering, organizing and stockpiling the baby items, its community partners can focus on their primary missions, Weiskerger said.

“It’s pretty impossible to ask all of the organizations to do the important work they’re doing and also warehouse all of these things that their families need,” Weiskerger said. “Now, they know they have this resource. What they tell us is, when a family walks in and they can hand them clothes, diapers, the things they really need at that moment, there is a sense of calm. Anxiety and stress levels come down, and they can do the important work they do.”

Dashaira Bennett, outreach social worker for Mercy Medical Center, stops by ShareBaby regularly to stock up on supplies to give to new mothers delivering some of the more than 3,000 babies born each year at the hospital.

“We have had moms come in and, due to mental health, substance abuse, homelessness, all sorts of issues, say, ‘I don’t have anything for the baby,’” Bennett said.

For the ones most in need, Bennett said, the hospital gives the mothers a newborn bundle from ShareBaby with wipes, diapers, toiletries and clothing. Bennett follows up if the family requests one of ShareBaby’s larger items. Bennett said she also hands out the donations to teen moms at an alternative high school and at quarterly events for women seeking prenatal care.

Before ShareBaby, Bennett said, the hospital tried to do the same for new moms and babies, but they would have to ask for donations, find grants or divert budget dollars.

Weiskerger said ShareBaby runs on about $300,000 a year with the help of more than 1,200 volunteers who sort the donations, clean the used items and bundle the diapers in packs of 25, some from new boxes and others donated from the leftovers of a child who outgrew the size. To date, ShareBaby has distributed a million items. Weiskerger said the nonprofit expects it can double its lifetime givings in a single year, given the network it has built and the response it has seen from people and companies.

To help reach its goal for the year, ShareBaby is looking to find businesses, neighborhood associations and community groups, such as Girl Scout troops, to hold 100 collection drives, Weiskerger said. Individuals can bring donations directly to the ShareBaby warehouse at 1792 Union Ave. during weekly drop-off hours.

“We provide a really tangible way for people to not only become involved in making the city better, but really reaching out to families and saying, ‘I am a family here in your own community. I care about you. I want to help you in a really specific way.’

“This is about building a network of support in our community across socioeconomic and geographic lines. We feel if we can make this connection over this shared experience of having children and raising children, then we build connections that can ripple throughout the community. When children are doing better, everybody is doing better.”