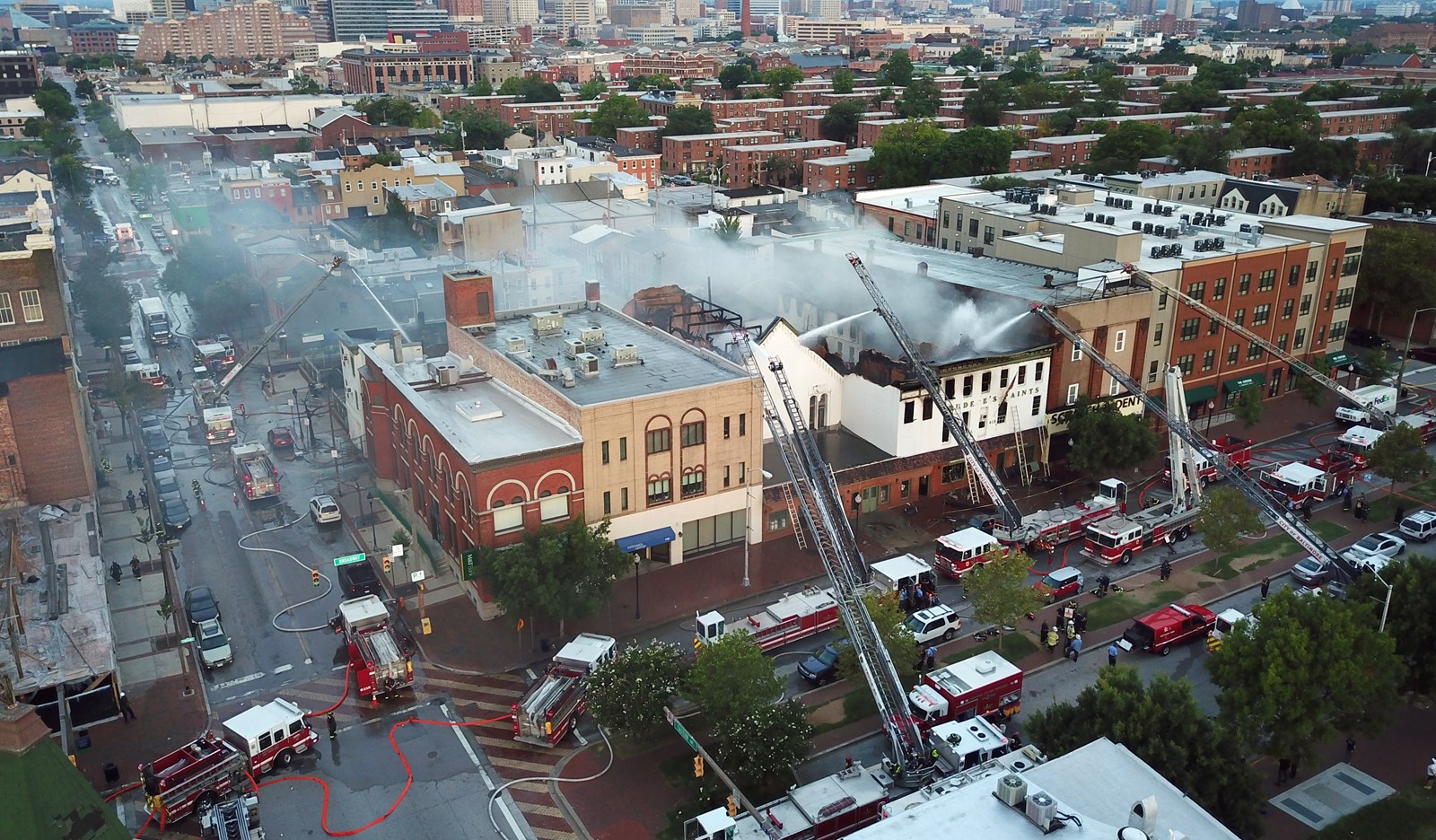 The Baltimore Fire Department battled a four-alarm fire in Fells Point that tore through a 150-year-old paint shop Friday morning.

A call for the fire in the 400 block of S. Broadway came in about 2:30 a.m., Fire Department spokeswoman Blair Skinner said. The fire ravaged Budeke's Paints, which was founded in 1868.

Crews fought the blaze for more than six hours. About 9 a.m., firefighters were still hosing down the buildings, and the department was monitoring the structures for hot spots. Fire officials were concerned about flammable materials in the paint shop igniting, Skinner said.

No injuries were reported, but about 50 residents of a condominium building at the corner of Broadway and Bank Street were evacuated as a precaution, she said.

The fire forced the closure of the adjacent Esperanza Center, a Catholic Charities arm that provides health, legal and educational services to immigrants. The center, at 430 S. Broadway, sits next to the burned buildings.

Valerie Twanmoh, the center’s director, learned about the fire through early-morning calls from the building’s security company alerting her that a fire alarm went off in the building and the Fire Department had been dispatched. “We’ve had false alarms before, so I really didn’t think much of it,” she said. After getting another call from a staff member, she turned on the news and saw the fire.

“We feel heartbroken for Budeke’s,” Twanmoh said. “They’ve been very good neighbors to us. They’re really wonderful and for this to happen to them really is tragic. So our gratitude for Esperanza being relatively OK is kind of bittersweet.”

The center is closed temporarily, and Twanmoh wasn’t sure when her staff would be able to get access to the building.

“We’re just happy that no one was hurt,” said Eric Seymour, a program manager for the Esperanza Center who was on the scene with Twanmoh on Friday morning.

Other neighbors and local business owners gathered nearby to watch dozens of firefighters work. Arthur Perschetz, who has lived in Fells Point for more than 20 years, lamented the damage to Budeke’s Paints. “There wasn’t any place better to get paint,” Perschetz said.

Jeffrey Caplan, owner of the nearby Super Linens store, agreed the shop was an asset to the neighborhood. “If you needed something and you were a customer, they’d give you anything you need,” he said.

The Society for the Preservation of Federal Hill and Fell’s Point said it was “deeply saddened by the loss of Budeke’s Paints” and . “This is truly a loss for the community, seeing one of the original businesses of the historic Broadway corridor going up in flames,” Jeff Dewberry, vice president of the society, said in a statement. “We hope to see this beacon, and gem of community business back open soon!”

The owners of the paint shop could not immediately be reached for comment.

Roger Gorman, whose brother owns the building across the street at 415-417 S. Broadway, watched fire crews work from the doorway of his brother’s space. Their building — previously home to Broadway Bicycles — caught fire 15 years ago and was one of several in the area to burn in the last few decades, he said. Although that building still stands, other fires have left that section of Broadway pocketed with vacant lots.