Summer hotter in city’s neighborhoods that have seen racial ‘redlining’ 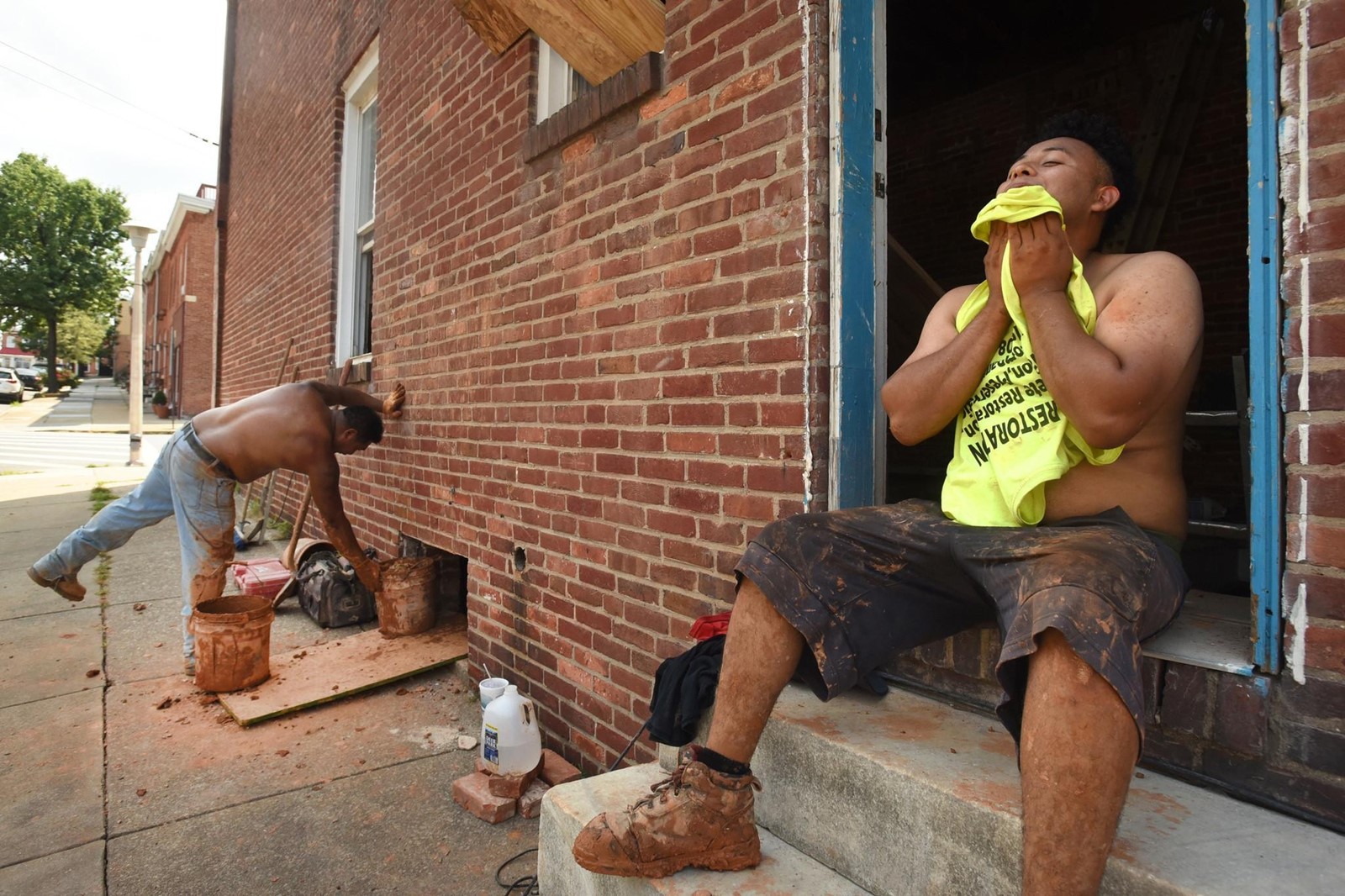 Kevin Garcia, right, mops his face while taking a brief break from excavating a basement in the 1300 block of Jackson St. in South Baltimore. (Amy Davis/Baltimore Sun )
PREVIOUS IMAGE

In Baltimore neighborhoods where a history of racial “redlining” has blocked investment, summer temperatures are nearly 6 degrees hotter than the citywide average. That difference is more extreme here than in all but one other urban area examined in a new nationwide study.

The study used land surface temperatures collected via satellite and plotted the data on a map showing areas in more than 100 cities that banks, mortgage lenders and other financial institutions once labeled as “hazardous” for investment — largely areas with predominantly black or immigrant populations. It found stark differences in summer heat in those areas compared to affluent and predominantly white areas because of disparities in tree and pavement cover that remain visible generations later.

Temperatures in redlined neighborhoods of Chattanooga, Tennessee, were the most extreme, at 5.9 degrees above that city’s average, followed closely by Baltimore, at 5.8 degrees above average.

The findings show that the impacts of redlining go beyond the more visible economic signs that many researchers have explored already, said Jeremy Hoffman, lead author of the study published this week in the journal Climate.

The research follows other work Hoffman, chief scientist at the Science Museum of Virginia in Richmond, and colleagues have conducted on what is known as the urban heat island effect in Baltimore and other cities. In 2018, they in one of the first of a series of experiments they conducted across the country. That work revealed during a summer heat wave.

Trees provide shade that cools the ground beneath them, while exposed blacktop bakes in the sun and retains heat through the night.

The research showed the degree to which that can create environmental extremes, even across a relatively small geographic area.

The more the researchers examined those differences in city after city, “the more clear the pattern became,” Hoffman said.

That prompted them to analyze the data using 1930s-era maps created by the Home Owners’ Loan Corp. as part of the New Deal.

In Baltimore, the government-sponsored corporation advised against investment across East and West Baltimore, as well as on the South Baltimore peninsula. It labeled most of the rest of the southern half of the city as “definitely declining,” while directing banks to invest in northern neighborhoods, primarily Homeland, Guilford and Northwood. Before the map was drawn, neighborhoods already were segregated by race through city legislation and housing covenants that restricted black and Jewish people.

The researchers found that on a summer day in 2016, temperatures soared nearly 6 degrees above a citywide average in impoverished Baltimore neighborhoods, while falling 3.6 degrees below average in the wealthy and white areas. The more than 9-degree disparity between the highest temperature and lowest temperature was 10th largest of the urban centers the study examined, behind cities including Portland, Oregon, Denver and Philadelphia.

Baltimore leaders said the report underscores the need to invest in redlined neighborhoods, including planting trees and rain gardens that also help to clean the air and water.

Terrell Williams, an organizer with Baltimoreans United in Leadership Development, said making that happen is not so easy. In many East Baltimore communities, residents tell him they don’t want new trees, fearing roots will break up sewer lines and branches will serve as hiding places for drugs. He said there is significant work to be done to educate residents on the value of trees.

The study follows similar research by scientists including Morgan Grove, of the U.S. Forest Service, who has authored papers linking urban heat and tree cover with trends in income and employment in Baltimore. Grove said the new research was striking because it shows the persistence of similar patterns of heat and poverty across the country, and suggests reversing them will be complicated.

“What are the reinforcing processes that cause these inequities to occur?” he asked. “One has to take on all those things. You can’t just say, ‘Well, we’ll plant trees.’”