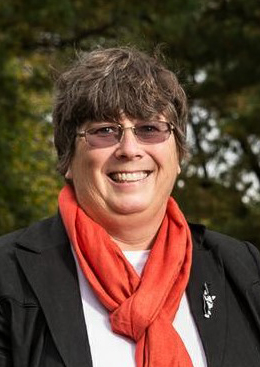 “Her humility comes first to my mind and that she didn’t need to be out front. She worked very much from behind the scenes to empower every student,” said Olivia Keithley, who first met Ms. Murray in 2008 at Hereford Middle School, and is now chairperson of the board of the Maryland Association of Student Councils.

“She was incredibly caring and kind, and she gave us support, advice and mentorship,” Ms. Keithley said. “She loved people and found friendships very easily with others. She was a fighter and committed to students.”

Tres M. McMichael was a student at George Washington Carver Center for Arts and Technology in Towson when he first began working with Ms. Murray.

“I was a senior in high school and the first student president she worked with at Baltimore County Student Councils, and she came to us when we were in extreme flux, and when she came, she didn’t try to take over, she trusted me and the students. She empowered us. She was a person who listened with her whole heart. She was the person whose shoulder I could always cry on.”

The former Catherine Honora Kestler, daughter of Marion Lee Kestler Sr., who worked for the National Security Agency and Catherine Honora Haller Kestler, a homemaker, was born in Baltimore and lived in Morrell Park before moving in 1975 to Sykesville.

Ms. Murray, who was known as “Nora,” was in the first graduating class in 1982 from Liberty High School where she had been an outstanding softball player and an All-Carroll County catcher.

She attended Lock Haven University in Lock Haven, Pennsylvania, and during her tryout for Lock Haven’s baseball team, broke four fingers which ended her hopes of playing college softball.

“I could not find my identity. My grades plummeted,” she explained in a 1997 Carroll County Times interview. After withdrawing from college, she worked as a telephone operator for the National Security Agency and then spent seven years as a scheduler and office manager for two carpeting companies.

After enrolling in Carroll Community College and earning an associate’s degree, she entered what is now known as Towson University in 1995. She earned her bachelor’s in 1997 in health education and subsequently obtained her master’s from Towson.

She returned to Liberty High School where she taught health education and was varsity softball coach.In 1998, she became the school’s student government adviser, and during her tenure, she expanded the program.

In her first year as adviser, she took her school to the Maryland Association of Student Councils events, and six years later, she received MASC’s Advisor of the Year Award in recognition of her exceptional leadership.

During her tenure at Liberty, the SGA was presented MASC’s Felix Simon Award in 2006. She left Liberty in 2008 when she was named MASC’s executive director where she supported the organization’s fall conference, legislative session, convention and the Region 2 conference.

“In 2009, she inspired and received the Catherine Nora Murray Unsung Hero Award in recognition of her selfless service to the students she supported,” according to a biographical profile of her life.

After leaving MASC in 2009, she returned to Carroll County as coordinator of youth development and student service-learning and adviser to the Carroll County Student Government Association, a position she retained until 2013.

“Within a year of being with us, she was able to get the students to vote for the person who was their representative on the Baltimore County Board of Education,” Mr. McMichael said. “She was always present, so dedicated, and there. She was always pushing us to challenge the system and create the world we dreamed of.”

After he graduated from Carver, Ms. Murray brought Mr. McMichael back to teach a course on anti-racism.

“I only had three teachers I ever told that I loved them and she was one of them,” Mr. McMichael said.

“Over the last eight years, Nora has made a tremendous difference in the lives of BCPS students through her work as the program specialist overseeing student leadership, volunteers systemwide, and student-service learning,” wrote Diana L. Spencer, communications officer for BCPS, in a tribute to Ms. Murray.

“Under her leadership, the number of students involved in Baltimore County Student Council general assembly meetings has more than doubled; a new Baltimore County Junior Council has been established to nurture student leadership at the middle school level; a new Board of Selected Students (BOSS) was created to involve still more students in leadership activities; students engaged in equity training.”

“Nora made sure the students got the resources they needed, and that’s why I always called her my Fairy Godmother,” Ms. Keithley said. “Equity was very important to her, and she made sure that students had a voice at the table. She was committed to that.”

Ms. Spencer credited Ms. Murray with making “personal outreach to increase the number and diversity of participating schools; and the school system moved from a committee choosing the student member of the school board to the student member being selected by the votes of all middle and high school students. She worked hard to infuse more student-learning into the curriculum and to enhance the way volunteers trained and celebrated at BCPS. The list goes on. And she did all this while battling cancer.”

She had not retired at her death.

In 2008, Ms. Murray was diagnosed with sarcoma, a rare tumorous cancer of the bones and connective tissue such as fat and muscle, and was given three to five years to live. Every few months, she had to have scans to see if new tumors had grown in her body.

“You just plan life three months at a time,” she told the Carroll County Times in 2011. “I’m in year three of my diagnosis but all that matters is that I feel good and have a great team of doctors, so it’s all about staying positive.”

Ms. Murray teamed up with doctors and fellow sarcoma patients for the annual Let’s Finish Sarcoma Walk that raised money to fund a grant for a doctor to do sarcoma research.

“It’s definitely at the bottom of the barrel when it comes to funding because it’s rare,” Ms. Murray explained in the 2011 interview.

“She was also definitely a fighter when it came to her cancer,” Ms. Keithley said. “She was stubborn. She didn’t give up. She was a fighter.”

Ms. Murray, who was an inveterate die-hard Orioles fan, enjoyed spending time at beaches and lakes. She was also an animal lover.

A Mass of Christian Burial was offered Wednesday at Holy Family Roman Catholic Church in Randallstown.

She is survived by her husband of 32 years, Daniel J. Murray, an electrician; her parents, Marion L. Kestler Sr. and Catherine Honora Haller Kestler of Sykesville; a twin brother, Marion Lee Kestler Jr. of Leesburg, Virginia; and many nieces and nephews.